Do We Need to Time Warp Again? | Bitch Media

Do We Need to Time Warp Again?Queer Identity and the Problems With the Rocky Horror Picture Show 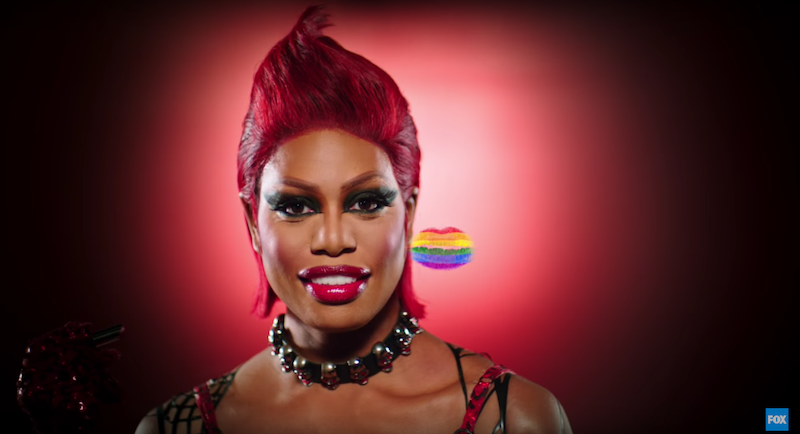 In a trailer for the new Rocky Horror Picture Show airing on Fox this week, Laverne Cox á la Dr. Frank-N-Furter plants a kiss on the camera that then turns into a rainbow, clearly paying tribute to the show’s LGBTQ fanbase.

I first heard about The Rocky Horror Picture Show where most people do: in high school, when my show choir compatriots extolled its intense weirdness as their ideal virtue. I was out in high school as bisexual and had experienced the cruelty of my bigoted peers as regularly as every day, which included microaggressions from those theater misfits, most of whom were straight and cisgender. For me, The Rocky Horror Picture Show culture seemed like this exclusive club, and you had to be comfortable with hypersexual, boundaryless teenagers to participate in it. That wasn’t me: I was more of a stay-at-home, don’t-touch-me type. I could never make friends with any of the hosts of screening parties, and I didn’t know how to access the movie on my own without stealing it online (Blockbusters were all but totally out of business at that point), so I stayed away from it. It probably also didn’t help that I was struggling with gender presentation at the time, surrounded by girls in makeup and skirts who seemed comfortable with their bodies, while I could never get femininity to stick on mine. No surprise I’d come out as genderqueer at 23.

After high school, I almost never heard anyone mention Rocky Horror except offhandedly or to say, “OMG, you haven’t seen it?!,” to which I’d reply, “No, and I don’t think I want to.” I’d seen pictures of Tim Curry in costume and heard a few audio clips of “Time Warp,” but Rocky Horror remained this nebulous mystery I couldn’t piece together without the actual movie. No one would, or could, explain it to me. It wasn’t until I graduated college that I was introduced to the queer culture of the film, which is the fervent center of its fandom. Tons of LGBTQ people (“like me,” I’m assured) champion this film as one that made them feel represented and included, that gave them a community they’d never had before.

I’ve struggled to find a community for myself. There has never been anywhere I’ve felt I fit, never a group of people I can definitively call mine, even in queer circles. This is a sentiment shared by a great many nonbinary people, and for some of them, it seems to have been the impetus for their obsession with Rocky Horror. It was where genderqueer writer Evan J. Peterson found a community, the midnight screenings becoming “a safe space for misfits and their families to go, feel normal, and have a damn good time.” Because of my early socialization when I came out as bisexual, I was led to believe my feelings were a) unwanted and b) feared. I learned that I made girls uncomfortable when I mentioned my sexuality. I learned in college that my roommate was legitimately afraid I was going to attack her in her sleep. I learned that I was a predator to many people just because of my sexuality, and that caused me to retreat from non-queer and queer people alike who were made uncomfortable by my reality. 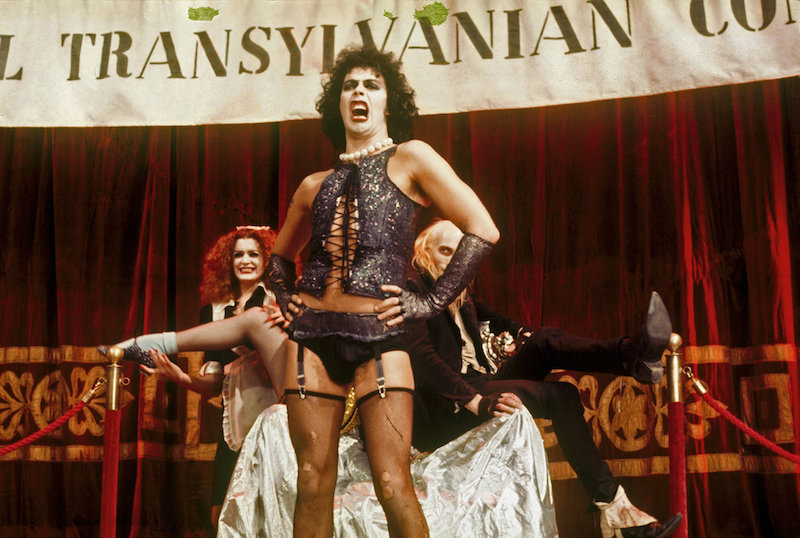 The predatory bisexual character is a well-documented trope in our pop media. After years of hearing about how beloved and welcoming Rocky Horror is, and with all the hype surrounding the upcoming version starring Laverne Cox as Dr. Frank-N-Furter, I decided to give the film a try, hopeful that I would maybe finally find some representation in something, some kind of community.

Everyone’s favorite transvestite alien from Transsexual, Transylvania acts out more of the same “predation by bisexual.” He lures the main characters, Brad and Janet, into his lair, creates a golem so someone will love him, and, presumably, have sex with him on the regular, and rapes both of the main characters by pretending to be the other one. This was the gender-ambiguous, bisexual character held up as an icon by people like me? Another villain with a tragic end meant to develop the sexuality tourists Brad and Janet? A rapist from outer space living in a mansion full of hypersexual minions whom he disposes of when they get a little mouthy?

I kind of get it, I guess. It’s almost universally loved by counterculture teens who are either out or still finding themselves, probably for the same reasons my high school peers loved it: While all their parents and teachers told them sex was bad and dangerous, here was The Rocky Horror Picture Show, throwing sexuality at them in a way that encouraged its expression. The pervading positive experience seems to revolve around the embrace of hypersexuality and flashy, outrageous gender presentation. As writer Judy Berman noted for Flavorwire, “At the time, I believed Rocky Horror felt like home to me because I was a freak craving the company of other freaks.” In the ‘70s, there was little to no representation in media for LGBTQ people, and the violence against them was pronounced and socially acceptable. They didn’t feel safe. Anywhere. The few vestiges of relief came in alternative culture and media, like Rocky Horror, which was intended as a hokey spin on horror B movies for the midnight movie crowd. Slate’s Outward editor June Thomas notes she’s never been “quite sure if the film is good for the gays,” but the film’s transgressive nature has helped many people feel more comfortable with themselves. “In the pre-AIDS days when the movie—and stage show—first appeared, Dr. Furter’s sex-positive (and, yes, murder-cannibalism-positive) message may have helped more people come out of the closet than any other work of art,” writes Thomas.

Later, the show’s creator would come out as nonbinary, although his attitudes on trans identities remain in the dark ages. But to uncritically continue to champion this shlock in the modern era when we have more freedom to demand real representation than ever? I’m not into that.

Now, after having seen the original, I wonder what the remake really exists to do other than cash in on a traditionally queer-focused community. If it remains entirely faithful to the original, it’ll just serve to contribute once more to the dangerous narrative that bisexual folks are predatory and creepy and that they just want to get in everyone’s pants. Even though we have an actual trans woman playing the role of Frank-N-Furter, if the character isn’t rewritten to reflect the change in conversations surrounding sexuality and gender identity, it won’t matter who plays them. Is it really, like Laverne Cox said, “possible to have a conversation about how language evolves…and…also enjoy Rocky Horror in 2016” when that kind of conversation hasn’t reached the mainstream yet? Trans people still lose their jobs because of their identities, and there is a consistently high year-to-year murder rate against trans women. Can we really keep using words like “transvestite” to describe a genderfluid/trans character (who isn’t even human) when most people haven’t learned the difference between “transvestite” and “transgender”?

So many interviews with Cox lob the lowball question of “but what about the word ‘transvestite’?” while failing to examine the most egregious Frank-N-Furter characteristics: This portrayal of queerness is hypersexual, villainous, and predatory. I’ve struggled with this very issue in real life, as have many of my queer friends, and reviving this story without retooling it with a critical eye seems irresponsible and potentially damaging to the community who upholds it as gospel. In a promotional video for the new version, which airs October 20 on Fox, executive producer Gail Berman says the crew is committed to telling the story differently than the original. “As soon as we cast Laverne Cox, we made a statement saying, ‘We’re telling this story for the 21st century.’ So it’s not a remake, it’s reimagined.” Let’s see whether it works.

I don’t believe that originals are sacred, and I want remakes to challenge their material. I want the remake to ask new questions about what it means to be queer in 2016. I don’t want the remake to just be an HD version with a more diverse cast. I want to find the light in this story that so many of my LGBTQ peers see, the light that guided them to new friends and family and saved their lives, but I just can’t see it through all the dangerous darkness. 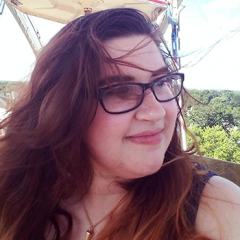 Jes Richards is a genderqueer, bisexual writer and gamer with way too many ideas and way too little time. She lives in Janesville, WI with her husband, mystery dog, and feral rescue cat, working her day job and running the team at her gaming channel, Game, Rinse, Repeat! on YouTube.

Thank you for putting into words something I have struggled to articulate. I used to love RHPS. It was about weirdos and sex and as a bi theatre kid myself, it felt welcoming. But as I've aged I've become more uncomfortable with it, and this is precisely why. I'll probably tune in to the remake, but no matter how good it is, I doubt it'll strike the same chord as it did in my youth.

You're welcome! I definitely don't want anyone to think they shouldn't enjoy things just because I find them problematic. I just think we should all be critical of things we love.

Love this article. I live in Wisconsin too. In the Milwaukee area. Is it rough for you living in Janesville Paul Ryan's district?

We just moved here mid-September, so the only thing I've noticed is the smattering of Trump/Pence signs. We almost bought a house on his street, though, which would have been REALLY weird.

...almost anything else about this remake is Laverne Cox having taken on the role of Franknfurter. It obviously is not up to me at all to tell her what she can and cannot do, but when we as transsexual women have spent and still spend an insane amount of time combatting the notion that we are 'nothing more' than transvestites, for our communities' most prominent face to take on this role feels... like a step or two back.

I call myself a critical fan. I like it, but I know it has many faults and perpetuates the idea that LGBT people are predatory and deviant. The remake doesn't do too much to change that but it's a step in the right direction.

I'm also critical of all the cishet folks who adore the movie but are uncomfortable with real life LGBT folks like me.