A Seat at the Table | Bitch Media 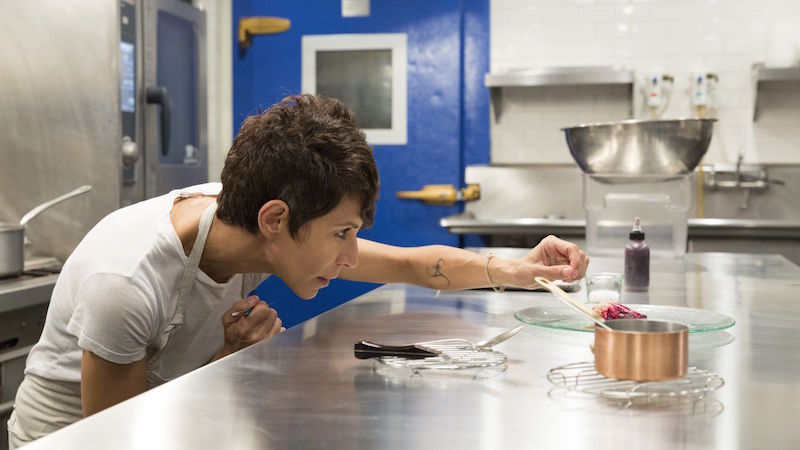 Sizzler was our family’s first “fancy” restaurant. We only went because my brothers and I were awarded honor roll certificates for free trips down the salad bar. We awkwardly stood in line, trying to decipher the menu framed on the wall, and only chose dishes that were accompanied by oversized photographs so we knew exactly what we were getting. I thought Sizzler was special because the menu felt foreign: dishes with slabs of steak, battered crispy shrimp, and an all-you-can-eat salad bar with trays of cafeteria linguine, chicken nuggets, and a soft-serve machine. For those couple of hours, in a small restaurant booth, our family could feel American, with forks instead of chopsticks and garlic bread instead of rice.

It feels silly now to think back on how special it felt to eat at Sizzler when my mother had been cooking three- or four-course Chinese Vietnamese dinners, always served family style, since forever—the kind of food that would be valorized if it were cooked by a young white dude chef who graduated from a culinary institution but was only deemed mere home-cooking at the hands of immigrant women.

Watching Netflix’s original documentary series Chef’s Table reminded me of those dinners at Sizzler and how food is more than just fuel, it’s in how we can imbue food and dining with so much meaning and memory, and how we value—or dismiss—who makes the food we so carefully photograph for our Instagram followers. The show presents on a single chef in each episode and tells the story of their journey to realizing their ultimate gastronomic vision. Chef’s Table has all of the right ingredients to create mesmerizing television: beautiful cinematography, a subtly moving soundtrack, incredibly compelling narratives, and, most importantly, endless plates of food you wish you could reach through the screen to taste and smell. It’s also a series focused on the work of a bunch of male chefs. 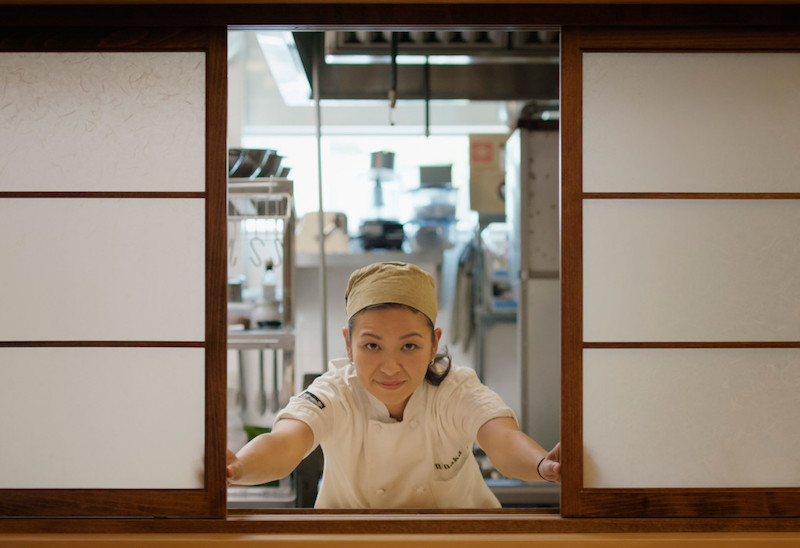 In the six episodes in the first season, released in 2015, Niki Nakayama, a chef of color, is the only woman chef and out-queer chef featured. (Did I hear someone holler “bingo” on their Marginalized Communities Representation card?) Her episode is made more powerful when we see how the intersections of race and gender have played a big role in the trajectory of her career and the food she makes as a Japanese American woman. It’s in deep contrast to the casual hedonism of French-trained Argentine chef Francis Mallmann, whose credo lies in “freedom of believing only in [himself],” and the central conflict in his narrative is around how he’s no longer having dinner with people he doesn’t like.

It’s unsurprising that the series is dominated by the stories of successful male chefs, because it’s also a show that’s obsessed with Michelin stars (the upscale culinary version of the gold stars your elementary teacher used to pass out) and other awards. Even in an industry in which women and people of color make up a significant portion of the workers, it’s usually white men who are awarded for their work. Another narrative seen throughout the series shows food critics bestowing chefs’ triumphant comeback stories with a single restaurant review—the very food writers who continue to center and celebrate all the same guys and how they’re “redefining how we think about [insert a noun that we eat].” I get it: Innovation is exciting and interesting, especially when the show offers us insight into a chef’s creative process and how they’re able to bring out the “carrotness of a carrot.” But the sameness of the archetypical mad chef romanticizing cuisine in his kitchen laboratory can be boring.

(Suggestion for a Chef’s Table drinking game: Take a shot every time someone says “elevating,” “sophisticated,” or “provocative,” or when an award or critic is mentioned. Double shots when a chef uses tweezers to carefully place a sprig on a plate. Triple shots if the critic who is mentioned is Jonathan Gold, who is perfectly depicted by comedian Hari Kondabolu in the hilarious short web series The Food, written and directed by Fresh Off The Boat’s Randall Park.)

The show’s second season, released in May of this year, was a welcome departure from the whiteness and (to a lesser extent) maleness of the first season. Standout episodes featured Alex Atala, a Brazilian chef with a punk ethos, Slovenian chef Ana Ros, who is completely self-taught, and Indian chef Gaggan Anand, who leads a kitchen in Bangkok with a staff who are a “virtual United Nations.” Even with inclusive casting of chefs, the show never deviates far from reinforcing the idea of who can be a proper chef. These are still chefs in sharp whites extolling their brands of fine dining, like when Anand proclaims, “We’ve kept Indian food as comfort food, and that’s why Indian chefs have not excelled.” It’s not so much that Anand is disparaging comfort food as he is holding up this idea of “excelling” through the professionalization of cooking and thus being awarded and celebrated for the craft.

It would seem that the show’s idea of who can be a proper chef doesn’t include chefs of African descent or Indigenous chefs, since none have been included in the series thus far and in both Chef’s Table: France (which featured four white chefs), and the upcoming season of Chef’s Table. But you know who will be on the fourth season? Ivan Orkin. He’s the white dude who literally wrote a book about how to make ramen. Will the show creators be mindful of editing his episode after the recent backlash around the Bon Appetit pho fiasco? How will they address the fact that the series has not yet highlighted a Japanese ramen chef when they feature Orkin’s famed Tokyo restaurant?

There’s a scene in the Niki Nakayama episode where writer Evan Kleiman, who is a chef herself, talks about the disparate treatment of marginalized chefs and says, “There’s been this whole conversation about women in the kitchen and how they get the short shrift from the media. And it’s true, they do.” It’s not enough to merely acknowledge that there is a lack of representation in the industry. It’s time to start inviting them to have a seat at the Chef’s Table.

I've never seen this show, but now I'm curious... though I admit, I anticipate being tired of the white maleness. It drives me bonkers to have a white man telling me what Indian food is like, or why it is the way it is, or even why they fuse it with something else to make it "better."

I hope that the show does what you're suggesting, and sets an example instead of just pointing out the issue.

This was such an interesting piece, Amy. I myself have always been a huge fan of cooking shows. In the past few years I have become invested in programs such as Master Chef, Top Chef, and Chopped. I feel that these types of shows have become increasingly more popular over the years, because of the competition and the audiences’ personal investment with the judges and characters. While the networks do a decent job at balancing out the male to female ratio, shows like Master Chef almost always have three male judges. Recently, a female replaced one of the male judges, and I noticed it received negative attention. Viewers did not seem to like her as much, and commented that they wanted the old judge back.
I have watched only two episodes of Chef’s Table, in which both of the chefs featured were in fact male. I agree with what you said about how white men are the ones who are normally awarded for their work in the culinary industry. It is unfair that a man can gain all the credit, when I guarantee that he had at least a few women help him attain his success. I think that much of this has to do with hegemonic social scripts. People begin to accept the way things are just because they are the most accepted. They will feed into the script that women are not as powerful, vocal, and cannot command attention enough to have a head chef job with a lot of authority. Women who do become head chefs represent transgressive social scripts, because they go against the idea that women cannot hold that much power.
There definitely are powerful female chef figures in the media, like Rachel Ray and Giada De Laurentiis, who have their own cooking shows and books. However, it seems that many of these chefs featured on Food Network are white. I think that Padma Lakshmi, the Indian-born American host of Top Chef, is an amazing example of how people of color can be just as successful, if not more, than white people. The quote you referenced from Evan Kleiman is accurate, and women do definitely get the short shrift from the media. People think women are making great strides in equality because they are making appearances on these types of shows, but this is inaccurate. Women may participate more in these professions but their hard work is going unnoticed. The media is both a positive and negative outlet for portraying women’s equality in the work force.

When I watched the first season of this show I loved how it highlighted not just the food that these chef's make but the cultures they come from and the difficulties they faced getting to where they are. But I also noticed the lack of diversity. Niki's episode really highlighted how being a person of color, a woman, a member of the LGBT community can affect your aspirations more than just "it was hard for awhile but then people came around." It is so important that these struggles are represented!
I appreciate your commentary on this show and I can only hope that the show realizes the importance of highlighting more than just CIS males.