When the Past is Present | Bitch Media 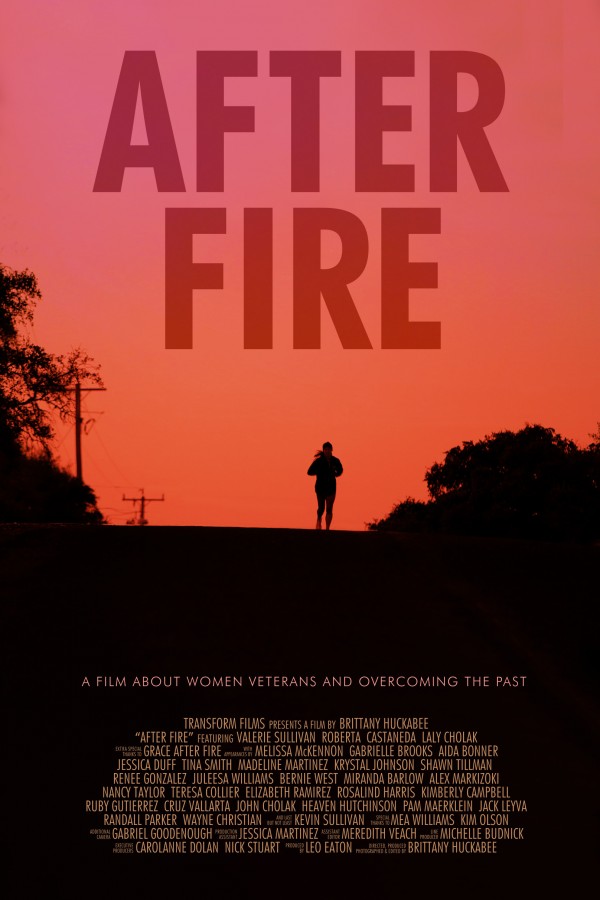 The opening scenes of After Fire, the new documentary about the struggles faced by women veterans after they leave military service, make a case for its importance through statistics. Viewers are informed that women are the fastest growing group of veterans, and that one in five veterans are women. We’re also told that one in four women report being sexually assaulted in the military. After providing this broad information, the film focuses almost exclusively on the specific experiences of three women veterans: Valerie Sullivan, Laly Cholak, and Roberta Castaneda.

The three women are involved with a Texas-based organization called Grace After Fire, whose mission is to help female veterans adjust to life after service and address trauma and emotional difficulties by providing a supportive community. The film shows several group meetings of Grace After Fire, where women update each other on the progress they’ve made, both personally and in dealing with the often confusing and frustrating bureaucratic entity of Veterans Affairs—an entity they must grapple with in order to receive the benefits they’ve earned, like health insurance and support in dealing with post-traumatic stress disorder and military sexual trauma (MST).

Both Sullivan and Castaneda confront the processes required by Veterans Affairs to address their experiences of MST. We learn through Sullivan, now a social worker and a successful bodybuilder, that incidents of MST are subject to a separate and higher burden of proof than other claims of PTSD—including having another person corroborate the events—and that because her MST occurred many years ago, it will be very difficult to obtain this proof. Castaneda, a mother of four and the leader of a Grace After Fire group, has her MST claim denied completely after missing a single appointment and must begin the process all over again. The film tells us it’s estimated that half of all incidents of military sexual trauma go unreported, and 40% of those that are reported have their claims denied. It’s impossible to extricate these facts from broader military culture, which has often been actively resistant to accepting women and sometimes openly hostile to them. The ban on women serving in combat roles wasn’t removed until 2013. Is it any wonder, then, that the military is less than supportive about issues, like sexual assault, that disproportionately affect women?

What is remarkable about After Fire is that it never dwells on the traumatic experiences these women have faced. It doesn’t sensationalize them or cater to viewers’ base desires to hear the gory details of pain and suffering. In fact, very little trauma is described at all—the film is a picture of restraint that places the focus squarely on these women’s current lives, even as so much of their current lives are tied up in their pasts.

In Leslie Jamison’s essay “Grand Unified Theory of Female Pain” from her book The Empathy Exams, she says, “The moment we start talking about wounded women, we risk transforming their suffering from an aspect of the female experience into an element of the female constitution.” This is a fine line that feminists are often trying to walk: We want to pay respect to the pain and oppression that women experience as a result of their gender, but we never want to imply that this suffering is a sign of inherent weakness or that womanhood is characterized by pain. The film’s director, producer, and editor, Brittany Huckabee, obviously considered this pitfall and actively worked to avoid it. After Fire is a sensitive and nuanced portrait of women’s pain: It does not define its subjects by their pain, but neither does it deny their pain or require them to qualify, perform, or justify that pain like the military bureaucracy does, and like many other portrayals of women in mainstream culture do.

At the film’s premiere, Sullivan praised Huckabee, saying, “I wouldn’t open up to just anyone like that.” Huckabee described feeling responsible to her subjects, wanting to make sure they felt good about the film she had created, “because they would be the ones living with the results.” Huckabee, whose previous projects include Hot Girls Wanted, about the amateur porn industry in Florida, and Sexy Baby, about the effects of internet pornography on sexual culture, describes her interests as “telling stories about the experiences of women—for women.” She spoke about feeling the urgency of this goal even more in the days after the election, about how important it is to tell women’s stories now “louder and louder, over and over.” The goal of the film, Huckabee says, is to be a tool that can be used to make a case for legislative changes that will benefit female veterans.

One of the most moving scenes in the film is one in which Sullivan gets on stage to compete in a bodybuilding competition. She spent a number of years traveling for competitions, but since then, she’d been out of the game for a while. Over the course of the film, she trains and exercises to prepare for this competition with little support from her husband this time around. As she flexes and poses onstage, clearly enjoying herself, her husband looks on with tears in his eyes and pride on his face. She takes second place in her category, a great result after not competing for several years.

Each woman highlights how hard it is for veterans to be vulnerable. They speak of how they’ve been trained to think only of the mission and to put the needs of others ahead of their own, of how impossible it feels to display any signs of weakness or fragility. Representations of sexual assault survivors in popular culture often focus on strength—the strength that is needed to come forward about your experiences, the strength to face another day, the strength to share your story with others—but few look at the issue through the lens of vulnerability. Sullivan, Cholak, and Castaneda are studies in strength; they’ve already learned to shoulder their burdens and keep going, but in this film, they share their journeys to become vulnerable, to admit that sometimes they still struggle.

On the subject of female suffering, Jamison says, “Relying too much on the image of the wounded woman is reductive, but so is rejecting it—being unwilling to look at the varieties of need and suffering that yield it. We don’t want to be wounds…but we should be allowed to have them, to speak about having them, to be something more than just another girl who has one.” It feels like this is a lesson that the subjects of After Fire are grappling with throughout the film. They are learning that they are allowed to (and must) acknowledge, experience, and confront their suffering head-on in order to adapt to civilian life after service. “In order to serve others effectively, we need to deal with our own issues we are suppressing,” Castaneda noted. After Fire navigates this dichotomy deftly, allowing its subjects to inhabit their suffering without defining them by it.

As a woman who has known women that experienced sexual trauma, I can vouch to say that there are many ways in which this documentary will be an aid to females of all ages in navigating sexual politics.

Relevant: It’s All In Your Head: The Dangers of Disbelieving Female Pain

by Caroline Reilly
Female pain exists in a crossroad of stigma, disbelief, and misogyny.