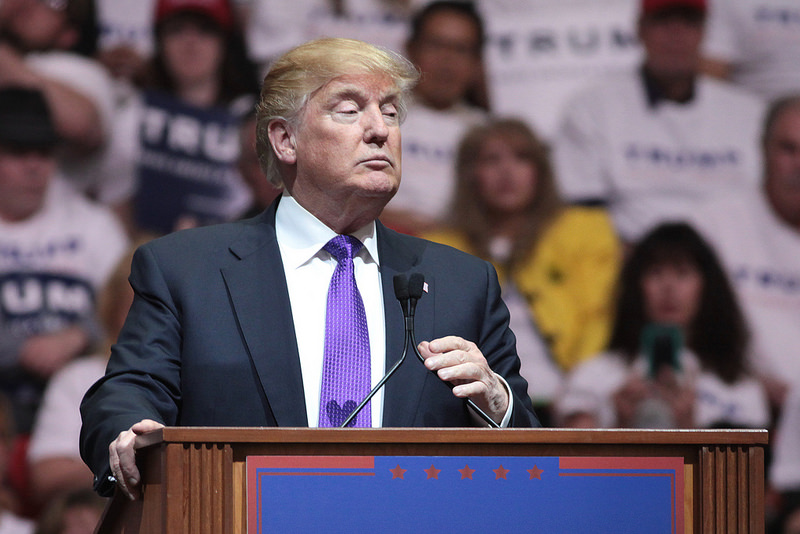 Donald Trump reminds me of this cat Mona I used to have. It wasn’t just that you didn’t quite know what she was hiding under the fluff, or that she moaned and caterwauled and ran riot over the house, or that she refused to show her tax returns and owned a string of failed businesses, but that she was so completely unpredictable that you never knew what was going to happen from moment to moment. She’d sit in your lap and happily let you pet her for an hour, and then suddenly, BAM: She’d sink her teeth into your hand with absolutely no warning. This made every day a simultaneously thrilling and terrifying new challenge.

She would have made a great running mate for the Donald.

The thing about Mona, though, is that she was strategically unpredictable. From a distance, her behavior looked completely erratic and nonsensical, but when you took a closer look, she was actually engaging in high-level cunning. Donald Trump is pulling a classic Mona this week: On CNBC’s Squawk Box, he said he wants to ditch debate moderators and challenge Secretary Hillary Clinton to a one-on-one.

Trump’s stated rationale goes like this: Matt Lauer was pretty much universally panned by critics after last week’s Commander-in-Chief forum, in which he repeatedly interrupted Clinton while giving Trump a comparatively free ride, so any future debate moderators are going to go extra hard on Trump to prove that “the establishment” calls the shots. The Donald insists that Lauer was “very professional” and that he’s being treated “unfairly” by critics. Apparently it’s super professional to refuse to challenge or fact check one candidate’s blatant lies while raking another over the coals on a matter that’s done and dusted. Trump says he wants a free and fair debate, and to him, that means going up against Clinton with no meddling third party in the ring. With his skillful manipulation of the media and his followers, it’s not just Trump who will be demanding this, but “the public.”

Here’s the thing: We do all understand that this is likely the lead to a setup in which Trump has an out, because he never wanted to do the debates in the first place, right? He’s just bitten the media in the hand after happily tolerating its petting, and while the media mutters expletives and tries to find the Band-Aids, he’s waltzing off to take a dump.

We already know that Trump loathes debates and will do anything to weasel out of them—remember when he boycotted a debate featuring his archnemesis Megyn Kelly (maybe he was concerned about getting blood on his…wherever)? And when he teased the question of whether he’d be willing to participate in this fall’s debates, and he said it hinged on the moderators? And then he complained about the schedule, suggesting there was a grand conspiracy at work and blaming Clinton’s campaign for something decided by the Commission on Presidential Debates a year ago?

Like Mona, Trump has everyone so terrorized that they scurry to do his bidding, except that instead of holding you up for cat treats, he’s holding all of us up for the White House. He already effectively won the fight over moderation—only one woman, Martha Raddatz, is participating in the presidential debates, and she can’t be trusted to appear on her own, so she’s being paired with the steadying influence of Anderson Cooper. Meanwhile, in an election where Latinx issues are huge, not a single Latinx journalist is moderating. After pushing the envelope to determine whether he could shape the moderator lineup, he’s nudging just a bit further to see if he can do away with moderators altogether.

What’s fascinating about this is that, like Mona, Trump refuses to listen to anything anyone has to say ever and merrily does his own thing without a care in the world. No one could possibly have expected him to abide by the debate rules or listen to the moderators’ directives at all—he certainly didn’t during the primaries—and his contempt for women more or less assures that he would have spent most of the debates talking over Clinton, making crude comments about getting “schlonged,” and displaying his complete and utter lack of understanding of policy issues.

His followers would have loved it. Like Mona, he’s found his target audience, and he works it.

But he’s realized that the only thing better than carrying on at the debates is not appearing at the debates at all—but only after making a big stink about how they’re unfair and how Washington elitists have rigged the game against him. He can perpetuate his myth as an antiestablishment hero while also successfully dinging Clinton for being too cowardly to face him one-on-one. For Clinton, this is a lose-lose.

If she demands that they stick to the established format for pretty much every debate ever, she’s being a coward and hiding behind the moderators hand-picked by her campaign (at least, that’s how Trump is going to spin it). If she agrees to participate in a one-on-one, caving to Trump’s demands in the interests of showing the country what an utter doofus he is, he’s going to ride roughshod all over her. Any of her attempts to assert herself will be taken as further evidence that she’s an out of control bitchbeast from Planet Witchface. Once again, Trump has neatly backed her into a corner where she can’t tell him to go suck an egg, just like the time Mona trapped a houseguest in the bathroom and they were powerless to do anything about it because everyone was too terrified to pick her up long enough to give him time to escape.

Trump has been laying the groundwork for this particular trap for months, and now, he’s sprung it at the most opportune moment possible: While he sets himself up as the kind of candidate who presses Clinton hard and refuses to bow to the establishment, Clinton is resting for a few days to recover from pneumonia. It’s a study in contrasts, and it couldn’t have gone better if he’d planned it. When people wonder about Trump’s paradoxical and confusing rise to power, this is the kind of thing they’re missing. His masterful manipulation of media and public opinion to get what he wants is driving his campaign.

At some point, someone is going to have to don a pair of leather gloves and drag Trump out of the bathroom doorway, but whoever it is had better be prepared for screeches at decibel levels previously considered unimaginable for such a small mammal.

by Dahlia Balcazar
The person who moderates the presidential debates and the questions they ask matter.