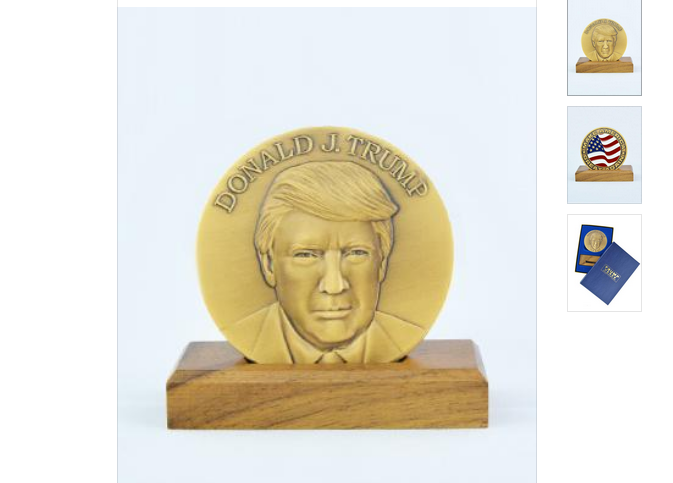 November is here, and that means the holidays and the anniversary of Trump’s popular vote loss are upon us. If you’re looking for “that special something” to celebrate, look no further: Donald J. Trump for President, Inc. and the Republican National Committee have unveiled an exquisite offering of POTUS products to mark Trump’s triumph and the 292 days, 5 hours, and 42 minutes he has spent trying to impeach Hillary Clinton.

From the iconic MAGA hat to official inauguration pint glasses, there’s something for everyone, without any shortage of opportunities to put your hard-earned minimum wages to work!

Consider the $45 Trump Commemorative Medal—a must-have that’s sure to look charming on your pumpkin plaid table runner alongside the turkey and Thanksgiving décor. These treasures are crafted by red-cloaked handmaids with white bonnets, who dutifully carve the medallions from gold leaf pried from the cornices of Trump Tower (Ivanka drops in occasionally to oversee this empowering initiative).

Sure, you may have earmarked your money for other causes (such as the advanced life support system you’ll need when your medical insurance gets axed). Fear not: Tweets from the president assure that your prospects have never been better! 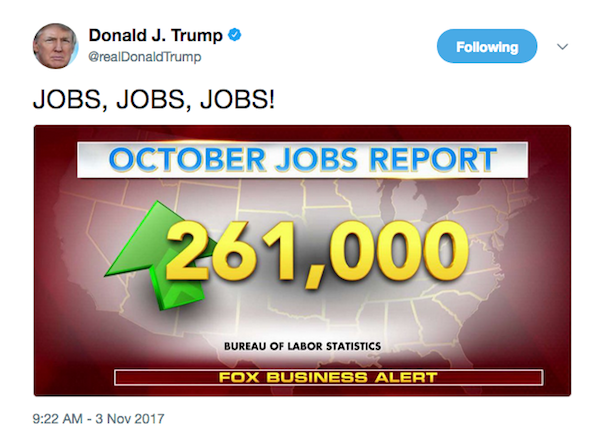 Your president is giving YOU a unique opportunity to continue the progress, fund his campaign, and celebrate the tremendous contributions he has made during his first year in office (or what may feel like the longest decades of your life).
Value-add: We now know that the RNC has been spending 10 percent of contributions on legal fees to defend 45 against Russia collusion inquiries et al. Remember, it’s small donors like you that make this $2+ million expenditure possible.

So open up your wallet and help “Make America Great Again!”

As Trump’s base knows, there is no bar too low for our president.  Making fun of the disabled; boasting “I could shoot somebody and I wouldn’t lose voters;” waiting two weeks to speak to families of fallen Green Berets (then telling an army widow her husband knew what he signed up for). How low will he go? The true Trump fan knows that no low is too low. That’s why in the probable event that the president decides to pull his pants down on a stage—be it a rally or United Nations convention—you’ll want to be stocked up on red MAGA caps to toss at his offending member like a kid playing horse shoes at a county fair. Buy as many hats as you can afford!  You won’t want to miss out on the fun!

As a bonus, supporters of Donald Trump will no longer have to whisper to each other, “Oh God, made in China! Don’t tell anyone!”  or “Crap! It’s made in Vietnam!” Thanks to Trump’s initiative to put Americans back to work, assembly lines for these fine mesh hats are located right here on American soil! 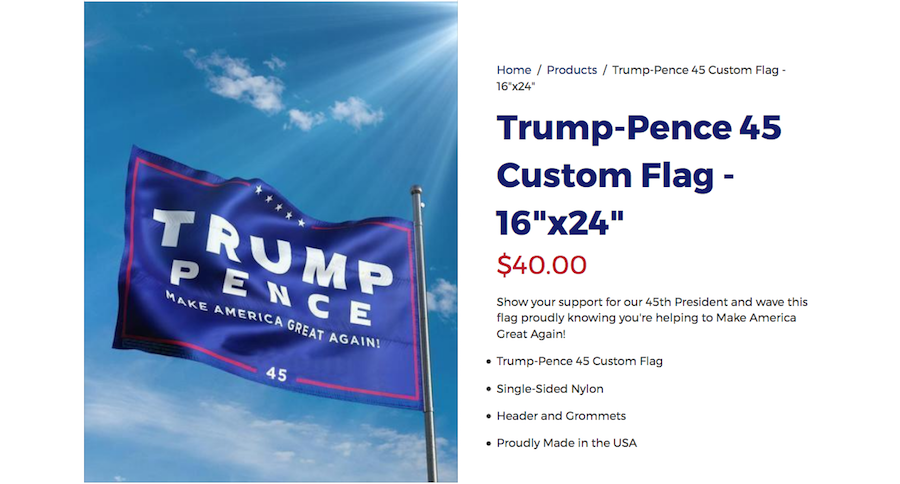 You will not find the national flag of the United States with the traditional 50 stars and 13 stripes on Trump’s shop site. The country belongs to Donald J. Trump, and he wants you to know it.  When this 16”x24” beauty flies in 180 mph Category 5 hurricane winds, it will remind you not only that Miami will eventually be lost to the sea thanks to unmitigated climate chaos, but also that that the White House has been thoroughly hijacked. When you come up for air from the next biblical flood, you’ll have a chance to remember that your country is no longer your own as you admire this flag flying high in the breeze!

The “Build the Wall tee” is especially popular with our Canadian friends across the border gearing up for the massive migration that is expected in the decades ahead … by beleaguered Americans fleeing the ravages of wildfires, loss of coastal cities, and extreme heat waves that will render large swaths of the United States uninhabitable.  Soon to come: a soft and sexy tank top that reads, “So How ‘Bout that Climate Accord?”

Nothing says support Team Trump like a set of collectible loudmouthed mouthpieces!  These 7-inch megaphones employ proprietary technology that automatically converts any intelligent words you might utter into unintelligible and vulgar phrases. Each bullhorn is equipped with two Invective Channels that allow for a continuous stream of criticism and expletives directed at the target of your choice: Channel A - Barack Obama, Channel B - Crooked Hillary, or Channel C - the failing and dishonest liberal media!

These megaphones are ideal for any occasion, whether joining POTUS in a catcall at a Miss America pageant, or for cranking up the volume while shouting, “Don’t forget to wear your flip-flops in the bathroom” at his sentencing hearing for obstruction of justice.

This official 2016 Campaign Yard Sign has just been reduced from $20 to $16, for a set of two. Not included: cans of fade resistant spray paint—useful for correcting “Trump-Pence” to read “Godspeed, Bob Mueller.”

It’s never too early to instill the values Trump holds dear: racism, fascism, misogyny, dishonesty, greed, and hatred for anything that breathes or has a green leaf on it. For the full effect, we recommend that you don’t put a diaper on your baby when she wears this incredibly soft, boutique-style one-piece (also perfect for the grown man accustomed to acting like a big baby.) 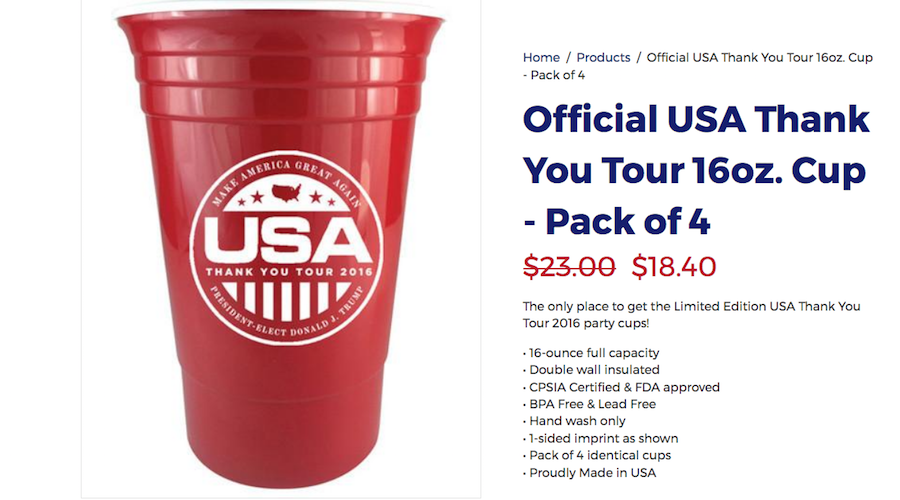 Last December, against a backdrop of Christmas trees, Trump took the stage in Orlando on his “Thank You Tour” to show his base some love: “You people were vicious, violent, screaming, ‘Where’s the wall? We want the wall!’ Screaming ‘Prison! Prison! Lock her up!’”

It’s hard work to be that “nasty and mean and vicious” (to use his complimentary phrasing.) The dedicated fan can now stay hydrated at the next hate rally with Trump’s stylish 16-ounce drinkware!  The cups are also FDA-approved for off-label use as Tiki-Torch extinguishers and are “double wall insulated” (guaranteed to keep the Mexicans and brown-skinned people out).

A favorite of the reviewers and one of the most popular items on 45’s shop site, Inauguration Gold Seal Coolies fit snugly around your Busch (and Bud Light and Old Milwaukee). Keep your support (and yourself!) high with premium protective foam wrappers while you sip your cares away waiting for FEMA to rescue you from the next “UNnatural” disaster. 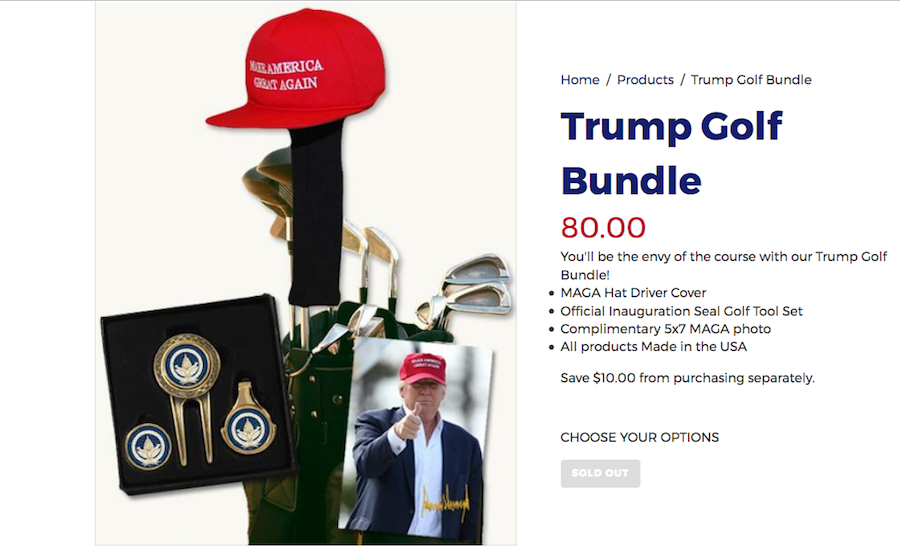 These sets are to die for! (And if you’re living in Puerto Rico, we mean this literally.)

There’s no better way to show your support for fellow citizens during a humanitarian crisis than to ignore them while taking a few weekends to golf before dropping in to toss some paper towels. With so many disasters befalling the country, no wonder these beauties are SOLD OUT!

Movie lovers will never forget Robert Duvall’s Apocalypse Now line, “I love the smell of napalm in the morning.” NOW you can have your very own personal saying when you wake up each day to your very own Apocalypse.

The $30 mug reads: “I love Waking up & Remembering That Donald Trump is President.”

(Not shown, the anesthesia cocktail Propofol-Midazolam Elixir—specially formulated so at the end of each day, you can thoroughly knock yourself out and forget that he was elected president in the first place.)

Money-back guarantee. All products are FDIC insured until the country goes bankrupt.  Because a promise made is a promise kept, and our word is our bond (as someone once said.)

Paid for by Trump Make America Great Again Committee, a joint fundraising committee authorized by and composed of and self-congratulated by Donald J. Trump for President, Inc. and the Republican National Committee. 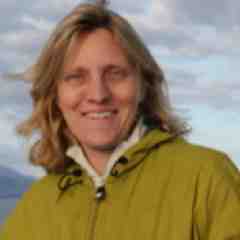 Margaret Hetherman is a writer and essayist, with eyes open to climate math.  She has written for publications that include Scientific American and PBS-affiliates, with other work on CNN, BBC, and MTV.  She is a member of the WaPo Talent Network, and a contributor to The Establishment, Purple Clover, Hour Detroit and more. Margaret is a graduate of the University of Michigan and holds a Master’s degree from New York University.