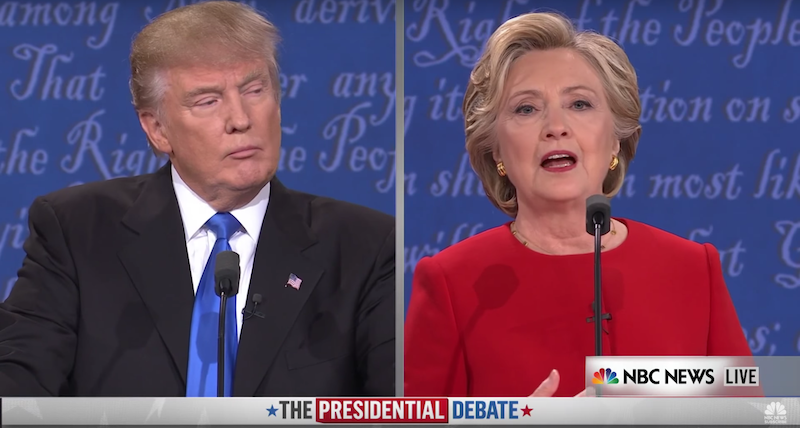 Sunday night’s debate was an exercise in horror—at one point, I contemplated putting a grocery bag over my head and slithering under the table in sympathetic embarrassment. It wasn’t even that Donald Trump stalked Secretary Hillary Clinton around the stage like a sexual predator, or that he steadfastly refused to answer questions and continually pivoted to personal attacks, or that he held a joke of a “press conference” beforehand with women who have accused President Bill Clinton of sexual impropriety. It was that Hillary Clinton, an extremely qualified, skilled, and knowledgeable woman, was forced to share the stage with a moldy, bigoted Cheeto in a parody of the democratic process, as though said Cheeto was somehow in any way a legitimate and comparable presidential candidate.

The way we talk about that Cheeto, though, has serious implications not just for this election, but for the future of this country.

The liberal corner of the internet in which I bask like a warm, furry, as-yet-ungrabbed pussy seemed to largely agree: The town hall would have been a joke if it weren’t so deadly serious. But something else also crept up, perhaps exemplified by this tweet: 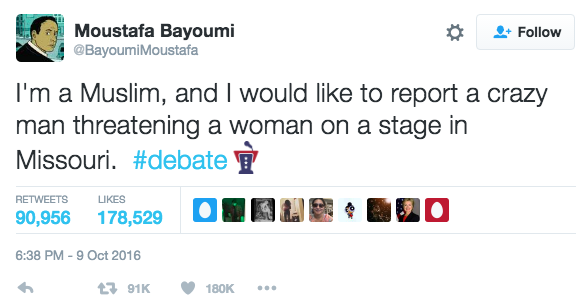 It’s a sharp, funny snapback at the way Trump looked a Muslim voter in the eye and basically suggested that if she’s not a perpetrator of “radical Islamic terror,” she should probably narc on all her terrorist Muslim friends. #MuslimsReportStuff went viral after the debate, with people weighing in with urgent bystander reports on subjects like family members drinking orange juice out of the carton and secret ingredients in hummus.

But read the tweet again. Your eyes may have skated over the word that made me cringe when I saw it retweeted into my timeline over and over again in the days following the debate.

In the last few months, rhetoric labeling the Republican candidate “crazy,” “insane,” “demented,” “schizophrenic,” “psychopathic,” “lunatic,” “narcissistic,” “bipolar,” or just “mentally ill” has abounded. It’s become so pervasive that the American Psychiatric Association was forced to reprimand its members with a reminder of the Goldwater Rule and the standard that says it is not appropriate to speculate about a public figure’s mental health without ever having met or evaluated that figure, though some psychiatrists have spoken out against it. (Those with a doctor-patient relationship are bound by the Health Insurance Portability and Accountability Act and may not release information without the express consent of the patient.)

The disability community remains unimpressed by the use of mental health descriptors as pejoratives, arguing quite rightly that they perpetuate stigma. My diagnosis is among those carelessly flung around to describe Trump, and I would be lying if I said it didn’t sting every time I see someone evoke it. Do people think that people like me—with a complex set of neurochemical imbalances that science still doesn’t fully understand, but that appear to be linked to both genetics and environment, factors both out of my control—are deplorable bigots? Is that what it means to be mentally ill? To espouse radically offensive policy proposals and to talk about other human beings like they are garbage?

But this is a problem that goes deeper than how it makes members of the disability community feel and how it sets back progress on building a world where it is safe to be openly mentally ill, to seek treatment, to request accommodations. And that problem is embedded in the fact that by labeling Trump’s behaviors as “mental illness,” people aren’t just engaging in casual hyperbole, they’re repeating terms they hear used as epithets without really thinking about it, much like a child parrots racial slurs without understanding them. Instead, they are pathologizing hatred.

Mental illness is widely regarded and treated as a pathology: Something wrong with someone that needs to be accurately diagnosed and then corrected. This is harmful for members of the mental health community who don’t view their diagnoses as pathologies at all, but simply as a part of themselves, part of the natural variation of a very diverse species. Socially, it means people associate mental illness with disease, but they also tend to think of it as something beyond someone’s control.

So what does it mean when a bigot’s behavior patterns are used as the basis for calling him “mentally ill” or using other slang terms for mental illness—terms that are actually still used in a sociolegal sense and aren’t just “words”? There’s not just a false linkage between mental health and social attitudes here, but an absolution.

Society isn’t responsible for my mental illness, though social attitudes certainly make it more difficult to live with and manage. Society is, however, responsible for Donald Trump’s bigotry. Racism, xenophobia, Islamophobia, disablism, transphobia, homophobia, misogyny, and more aren’t evidence of pathology. They are learned behaviors. Donald Trump wasn’t born with the potential for, say, Islamophobia lurking somewhere in his brain, waiting for the right trigger. He learned that behavior from the society around him, which introduced and affirmed it, and now, it’s given him the ultimate reward with a presidential nomination. Like Al Gore, he’s going to be one of the few losing major party presidential candidates remembered in history, in this case because his campaign has been so outstandingly vile—Clinton was accurate in describing the attitudes built up around Trump as “deplorable”—but also because he is the epitome of everything wrong with how Americans deal with prejudice and hatred. 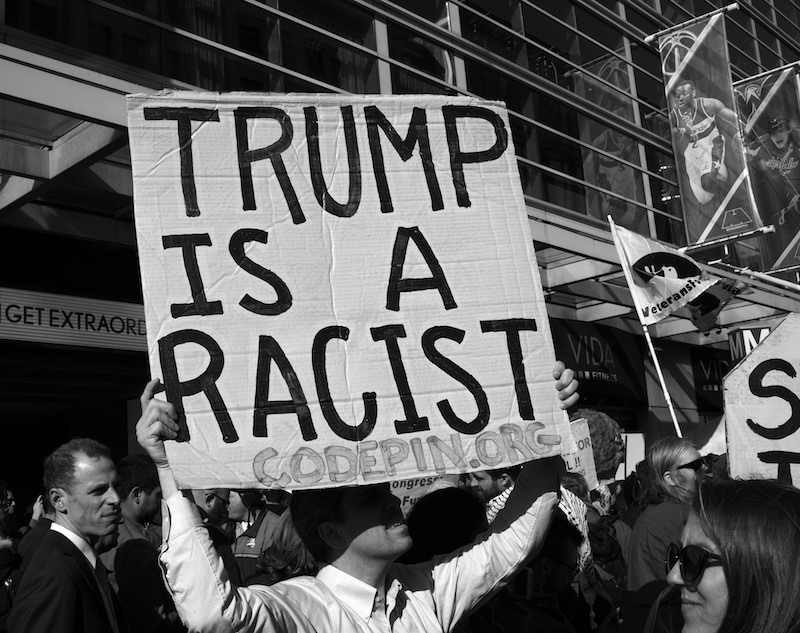 Sociologist James Thomas, coauthor of Are Racists Crazy? How Prejudice, Racism, and Antisemitism Became Markers of Insanity, spoke to Pacific Standard about the quite lengthy historical trend of assigning racism to illness: “To deduce that racism must indicate a psychopathology is to ignore its social history as a political category,” he said, commenting that when it comes to lynch mobs (or Trump supporters), “[i]nstead, and this will likely trouble readers, the lynch mob exemplifies normative behavior, in the sense that it articulates symbolic boundaries, and concretizes collective narratives, even in its most violent and abhorrent acts.”

Racism, he argues, is a mundane social phenomenon—it is everywhere, ubiquitous and surrounding us as a cultural meme. It is also something structured and built by society, which means that it is something that can be torn apart by society, if, that is, society is willing to do so. This applies to the entire basket of -isms that Trump endorses and perpetuates. To dismiss Trump’s attitude and the cultural movement surrounding him as mere “mental illness” is to abrogate responsibility for our own complicity in creating the world that made Trump and to shrug off the obligation to do something about it.

If America accepts that it had a hand in building this—regardless of political party or personal beliefs—then it must also admit that it should be doing something about it. This is something big and scary, as evidenced by the resistance to people in underrepresented groups who are fighting for equality: To Black Lives Matter, radical trans activists, disability justice organizers, Standing Rock and Sacred Stone Camp, refugees, Muslims, defiant queers, members of the Jewish community, Latinx people, Asian-Americans, and everyone else who is fighting to build an America that is inclusive and an America where it is safe to be themselves.

Admitting responsibility starts by not dodging it, which means it’s time to stop treating Donald Trump’s terrifying behavior as “mental illness” and start acknowledging it as what it is: The inevitable outcome of the society we have built for ourselves. But it doesn’t have to be the endgame, unless we want it to be.

I understand what you are saying. I have chronic major depression, panic attacks, and PTSD. I have also worked many, many years in the mental health field. Watching Trump this past year (and even before), he hits the marks on a couple (or more) DSM categories. Personally, I don't like the label "crazy," but if the shoe fits the Donald, he should wear it. And having a mental illness should not preclude going to jail when you commit crimes--hate, sexual predation, tax fraud, general fraud, intimidation and bullying, blackmail/threats, etc.

"Crazy" is a horrible shortcut.

The discipline of "applied psychoanalysis" makes it possible to look at a person's behavior, speeches, press conferences, watch how he/she relates to people and issues, and witness the discrepancies between what s/he says and does. It involves studying the messages, the nonverbal presentation, repetitive speech patterns, and idiosyncratic use of language. The historical record can be referred to for information about his/her past and her/his family. --- taken from pages xiv and xv of "Bush on the Couch" by psychoanalyst and psychiatrist Justin A Frank MD, 2004.
Dr Frank's website -- http://www.obamaonthecouch.com...

Using applied psychoanalysis it is possible to ethically state that Trump is likely experiencing 1-2 personality disorders, likely untreated ADHD, and is an active sex and love addict.