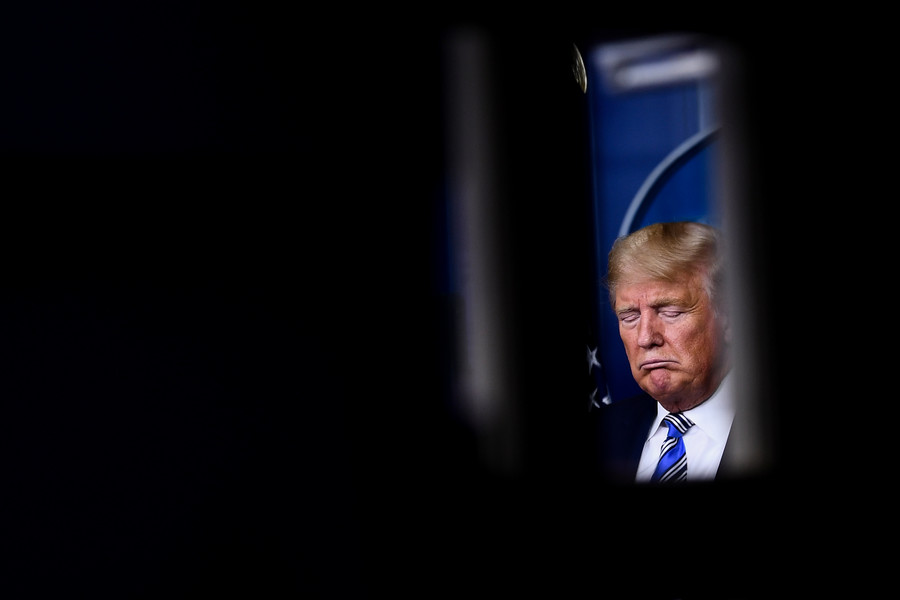 President Donald Trump listens during the daily briefing on COVID-19 at the White House on March 23, 2020. (Photo credit: Brendan Smialowski/AFP via Getty Images)

I’m autistic. I’ve spent my entire life learning about the dangerous, life-threatening decisions that people make to cure someone like me: detoxifying clay baths, Hyperbaric Oxygen Therapy, neurofeedback, GcMAF (an injection made from blood cells), chelation therapy, and bleach solutions such as Mineral Miracle Solution (MMS). There’s an entire anti-vaccination movement designed around disproven, irresponsible research from 1998 that suggested a link between the vaccine for measles, mumps, and rubella (MMR) and autism. According to a 2019 Gallup survey, 10 percent of adults in the United States still believe that vaccines cause autism in children and 46 percent are unsure—and it’s difficult to convince people that something they believe in is actually untrue, thanks, largely, to confirmation bias.

During an April White House briefing about the pandemic, Donald Trump offered bleach as a possible treatment for COVID-19. While disability advocates quickly warned people on social media not to heed his words, it’s difficult to challenge the words of a president, especially when you’re marginalized and are struggling to be taken seriously. For the sake of public health, everyone needs to listen to autistic and disabled people and science: Consuming and injecting bleach is dangerous. Autistic and disabled people have been harmed by so-called miracle cures, from lobotomies to leeches, throughout history. Bleach solutions—such as MMS, an industrial form of bleach called chlorine dioxide—being treated as “fixes” for autism are a more recent development that were only banned in the United States this month.

The popularity of MMS can be traced to the Genesis II Church of Health and Healing and its ex-Scientologist founder and archbishop Jim Humble, who claimed that he discovered chlorine dioxide in 1996; on his website and in self-published books, Humble recommends MMS as a treatment or cure for a variety of illnesses and disabilities, including Parkinson’s, urinary tract infections, depression, HIV/AIDS, and cancer. Writer Kerri Rivera’s self-published 2013 book Healing the Symptoms Known as Autism also popularized chlorine dioxide as an autism cure and she promoted it on private Facebook groups, YouTube, and at autism treatment and anti-vaccination conferences. Rivera’s website claims that she’s helped more than 550 children “recover” from autism.

Bleach cures like MMS are abusive tactics that can seriously damage autistic children, with side effects ranging from nausea and vomiting to diarrhea and severe dehydration. Many of these parents, who often learn about these “treatments” on social media from other parents of autistic children, have used these “solutions” on their kids with disastrous results. Lancet, the medical journal that originally published Andrew Wakefield’s research about vaccines causing autism retracted the article in 2010; the General Medical Council also found Wakefield guilty of “flouting ethics protocols” and claimed he “abused his position, subjected children to intrusive procedures such as lumbar puncture and colonoscopy that were not clinically indicated, carried out research that breached the conditions of ethics committee approval, and brought the medical profession into disrepute.”

And yet, people still believe that vaccines might cause autism, with vaccination rates actively declining in 27 states across the United States. Thanks to this misinformation, poison control centers have managed more than 16,000 cases with chlorine dioxide from 2015 to 2019, according to data provided by the American Association of Poison Control Centers to NBC News. Approximately 2,500 of those 16,000 cases involved children under the age of 12. More than 2,000 of these cases resulted in serious side effects, 50 were life threatening, and eight people died. The Food and Drug Administration’s adverse event reporting system also found cases of injuries from chlorine dioxide, including a 6-year-old autistic girl being hospitalized in 2017 for liver failure.

It’s time for the public to listen to what autistic and disabled advocates have been saying for years.

It’s possible Trump was sucked in by the false “scientific” narrative of chlorine dioxide as a cure-all. There’s speculation that Mark Grenon, another Genesis II leader, influenced Trump’s thinking about treating this coronavirus. The Guardian reports that Grenon told Trump in a letter that chlorine dioxide is “a wonderful detox that can kill 99 percent of the pathogens in the body” and that it “can rid the body of Covid-19.” But Trump has previously tweeted that vaccines can cause autism. “Healthy young child goes to doctor, gets pumped with [a] massive shot of many vaccines, doesn’t feel good and changes—AUTISM. Many such cases!” he tweeted in 2014.

He has since claimed his remarks about disinfectants as a possible treatment for COVID-19 were sarcastic, but it may be too late to walk back his comments: It’s difficult to combat misinformation, even with evidence-based science on your side. People who are desperate—like many parents of autistic kids and everyone living through this pandemic—cling to ideology that promises them relief. People are known to reject the validity of science when it contradicts their views. Attempting to persuade people with facts, especially when those people are fearful, often backfires and causes them to cling even more tightly to their views.

It’s time for the public to listen to what autistic and disabled advocates have been saying for years: There are no miracle cures for autism and other disabilities and experimenting with these “treatments” is dangerous and can be deadly. Instead of consuming or injecting bleach to treat COVID-19, check in with a licensed medical professional about the best course of action for your illness. I’m autistic and I’m fed up with the way my brain works being used as fear-mongering for parents to abuse their children or withhold critical vaccinations from them. The best “cure” for autism isn’t actually a cure at all—it’s loving your autistic child exactly as they are, accommodating their access needs, and being an ally to them so they can navigate our largely inaccessible world with confidence and self-advocacy.