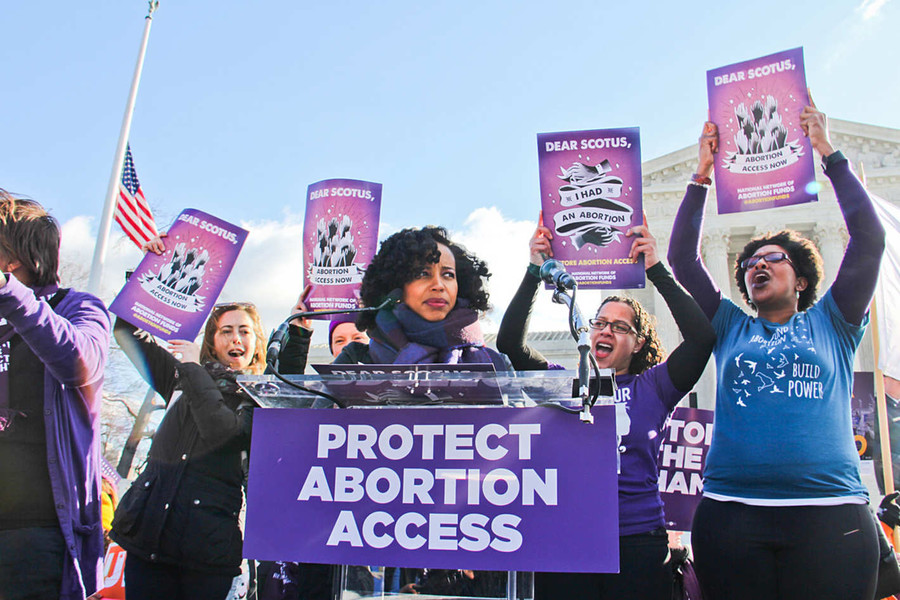 Abortion access has long been in danger, but as Mallory McMaster recently noted, anti-choice advocates are now approaching their endgame: overturning Roe v. Wade. Since January, six states—Georgia, Mississippi, Ohio, Kentucky, Iowa, and North Dakota—have passed “heartbeat bills,” which ban abortion the first sign of a fetal heartbeat. Since most people don’t realize they’re pregnant until they’re about six weeks, these laws are essentially total abortion bans. Alabama has taken these extreme bills even further: On May 14, the Republican-controlled state legislature banned abortion—unless the life of the mother is in jeopardy. There is no exception for rape or incest, and doctors who perform abortions can be charged with felonies and sentenced to up to 99 years in prison.

The American Civil Liberties Union has already vowed to sue to stop Alabama’s law from taking effect and other pro-choice advocates are following suit in Ohio and Georgia. As these cases snake their way through courts, however, there still remains one clear and direct way that ordinary citizens can protect abortion access for all people: support abortion funds. Abortion funds are city- and state-based grassroots organizations that provide resources to people who need to terminate their pregnancies. They cover a number of expenses, including the cost to travel to another state if abortion is banned in the one a person is living in; the cost of the procedure itself; and the cost of childcare for those who are already parents.

Yamani Hernandez, the executive director of the National Network of Abortion Funds, has been on the frontlines of this fight, and she remains committed to empowering people to make the best decisions for their bodies. She spoke to Bitch about the importance of abortion funds and the long fight to preserve and expand the protections of Roe v. Wade.

You previously worked as the executive director for the Illinois Caucus for Adolescent Health, and have a long history of working with young people around sexual health and reproductive justice issues. Do you see your work at the National Network of Abortion Funds as an extension of the work you’ve been doing for the past 15 years?

I definitely see it as an extension of the work that I have been doing. [My work at the National Network of Abortion Funds] also specifically hones in on abortion from a more intersectional standpoint whereas the work that I was doing with young people or on behalf of young people was about the full range of reproductive health options and sexuality. I think abortion fits into that. I came to the National Network of Abortion Funds because they specifically call out young people in [their] mission, and I found that the struggles for abortion access for young people is kind of marginalized within the broader reproductive health and abortion access movement. I really hoped to be a more national spokesperson on behalf of young people.

A lot of younger people don’t receive comprehensive sex education in their schools. What are some ways that young people can become more informed about sex, reproductive health, and abortion?

We’re in a different time than when I was younger person; there’s so much more on the internet now. I really applaud Advocates for Youth, a national organization that [focuses] on sexual health, [for building] several online tools that young people can access directly. One is called Amaze. They [also] have video series and other media-based tools for people to learn more about abortion, sexuality, and [overall] sexual health. [Accessing Advocates for Youth] is one of the ways that young people can look for information that is more comprehensive than what they might be getting in school [or from] porn, friends, and random internet searches.

Tell me more about the mission of the National Network of Abortion Funds. How does it run? How can people access abortion funds in their local communities?

The National Network of Abortion Funds is a network of local grassroots organizations that make the legal right to abortion actually possible. Roe v. Wade has never been a promise for abortion access for people with lower incomes, people in certain regions, and people with various [health] insurances. And so, the [network is] really working at the intersection of service, direct service and organizing, and organizing at the intersections of racial, economic, and reproductive justice. [They] are helping people pay for their abortions; helping them get rides to their abortions or paying for transportation; paying for childcare or providing childcare; providing housing or paying for housing; and connecting them to abortion, doula and emotional support. Many clinic escorts are also Abortion Fund members as well. We always say [our mission] is to make the legal right actually possible. There are 70 abortion funds that represent 41 states. We have a directory of them on our website.

People can get involved by calling their local Abortion Fund and offering to volunteer. We also have individual memberships. If you go to our website, you can become a member. It’s a sliding scale from $0 to $25 [and] you get a cool t-shirt that says, “Everyone loves someone who’s had an abortion.” [Joining the NNAF] invites you into a community that wants to act on this issue.

How do abortion funds specifically work to increase access for those impacted by the Hyde Amendment?

Abortion Funds help pay for abortions for people who cannot use their insurance to pay for the [procedure]. There’s a helpline that folks can call in their local cities and states and let them know what the need is. Unfortunately, there’s a huge gap between how many people call and how much help Abortion Funds are able to offer; that’s part of the reason why we are trying to grow support for Abortion Funds. So [in] 2017, there were 150,000 calls for help, and about 29,000 of those people were able to be supported. We’re always trying to [raise] the profile of Abortion Funds. I think historically, [we] have tried to work a little bit more covertly due to the shenanigans of anti-choice people, but in this time, [we] want to be visible and [easily accessible].

What are the biggest misconceptions that people have about those who have abortions or seek financial assistance to have an abortion? How do we dispel those misconceptions?

There’s a broader narrative that we [need to] talk about. It’s an easy talking point to say that wealthy people will always be able to pay for their abortions, and people with lower incomes are [really] at risk of not having access. I think that it gets more complicated when we exclude middle-income people and [fail to] recognize that healthcare should be accessible to everybody. Most Americans don’t have $1,000 saved, and even a bigger percentage of those people don’t have $100 saved. A medical emergency is a medical emergency, [but] we make it seem like, “Oh, [being unable to afford an abortion] is [only a] working-class people’s problem.” But it’s a systemic injustice.

Bitch has worked with several writers from the We Testify program for different stories we’ve published. How did that program start? Why is it so important for people who’ve had abortions to have a program that encourages them to tell their stories?

A huge part of our work is breaking down stigma about abortion. As much as we need policy change, we also need cultural change. A lot of polling tells us that the majority of people who live and work in this country want [access to] safe and legal abortion. Yet there’s this dominant narrative about abortion [that’s coming from] very vocal and misguided people. On his campaign trail, Trump talked about abortions [being performed in the ninth month], which doesn’t happen. I think there [are] a lot of people [who] are confused about what abortion.

Having people tell their stories really helps show all the different type of people [who] have abortions for any number of reasons. [No two stories are] identical, [but abortion] is so common [and] normal. Some people tie [their decision] to their faith and some people tie [their decision] to their parenting, since the majority of people who have abortions are already parents. Anti-choice people make it out to seem like people who have abortions are anti-family and irresponsible; storytelling gives a more nuanced view of the issues, normalizes the abortion experience, and gives people permission to be more open about abortion. [They] know that there’s a supportive community of people [who] have their backs.

The program is called We Testify because we want to help people become advocates and literally testify to policymakers about their experiences. When you go public with your story, [a lot of times] you [will] receive harassment online, [so] we support storytellers and don’t think of it as a transactional experience. [We] want to also represent populations of people that have been underrepresented in talking about abortion—gender-nonconforming folks, people in rural areas, young people, and just the gamut of people.

Paying for people’s abortions is a revolutionary and political act.

People who work for reproductive justice organizations and abortion providers have seen the hostility and violence of anti-choice activists for a long time. Has anything specifically changed since Donald Trump took office? Or is this just part of a longer fight?

Anti-choice people are emboldened. The two appointments that Trump has made to the Supreme Court have [made it] more conservative and farther to the right. Those are concrete things that have happened since Trump has been in office that threaten legal abortion access in all of the states.  It’s really important for anybody who’s concerned about this issue to be vocal with their local legislators—their Congress folks, state and federal Congress people—[and]let them know where they stand on the issue.

[The NNAF is] trying to balance political advocacy with the urgent and immense need for care. We know paying for people’s abortions is a revolutionary and political act. It’s redistributing wealth. It’s making the legal right actually possible. We hear all the time from people who write us 10 years later or five years later and say, “That $250 that you gave me changed my life.” We have a National Abortion Access bowl-a-thon; the average donation size is $50. [In 2017], the bowl-a-thon raised $2 million to directly pay for people’s abortions. Small donations make a huge difference in making access possible.

That’s how you end up with Supreme Court cases like Whole Woman’s Health vs. Hellerstedt, which challenged [if] trap laws in Texas were undue burdens. States are, for lack of a better term, whiling out. They’re just trying everything they could possibly do until they get checked on it at a Supreme Court level. That’s why we say that Roe v. Wade is really the floor; it’s not the ceiling. Just the legal right alone [is] not enough. If Roe v. Wade were to expand to actually eliminate all of those undue burdens—that’s the future that we’re fighting for.