Don’t Get ComfortableCulture-Jamming Cardi B and “Bodak Yellow” 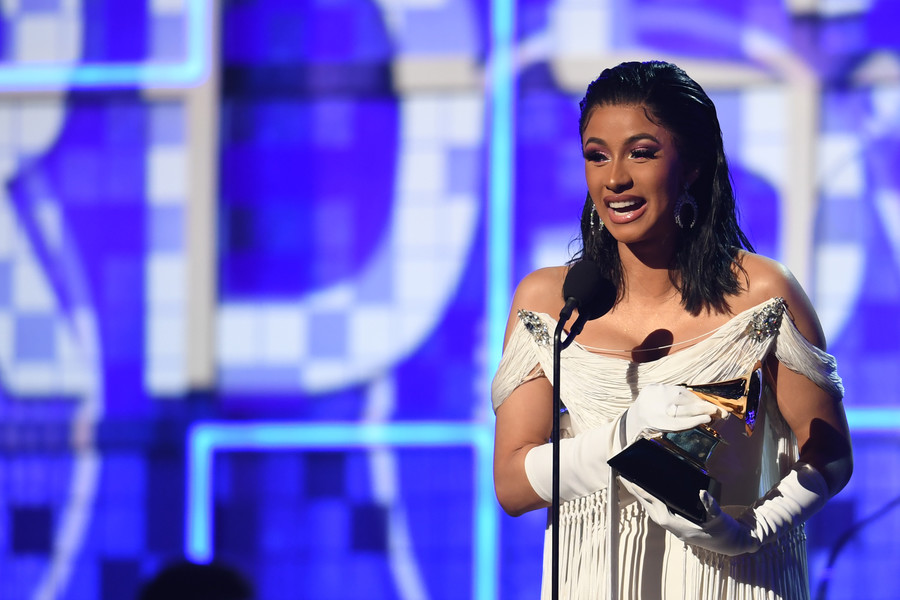 As we enter the season where late-stage capitalism co-opts holiday cheer, I’d like to invoke a viral twitter thread that reads Cardi B’s record-breaking, chart-topping, single “Bodak Yellow,” as a “pro-femme communist anthem,” as described by the image’s creator, @thathairyfemme. Inspired by a conversation with a friend about the song’s meaning, this Black, queer, femme and nonbinary artist reinterpreted the song about “making money moves,” imagining very well how Cardi’s work could be placed within a liberatory framework. I think, especially due to Cardi’s problematic anti-Black and transphobic behavior, it’s only right for fans who still appreciate her creative productions to implement their own freedom dreams into the music’s meanings.

The photo reads “A message to the Black bourgeois who have forgotten that while they may be Black they are still members of the oppressive bourgeois and not exempt from having their wealth redistributed”—a message that anyone tuned into my frequencies will hear me echoing loudly. I don’t believe in the existence of an international Black bourgeois class: Black folks’ relationship to capitalism is an abusive one, shaped through the commodification of their bodies for centuries during chattel slavery, the continued exploitation enabled by the prison-industrial complex, and a legacy of colonialism that still benefits colonizers at the expense of the Black and Brown humans they abused and displaced. I see the presence of Black people who have gained access to the bourgeois class and I am not here for it.

I don’t mean just Cardi, but those, like Ben Carson and Barack Obama, who have not only embraced American capitalism but have also emboldened themselves as imperialists who will ruin communities abroad and at home for capitalism’s tokenism. The presence of a very few Black folks with significant wealth shouldn’t be heralded as great because tokenization will not lead to an equitable society where the Black community’s access to resources and wealth is facilitated. Or, as Audre Lorde reminded us, “The master’s tools will never dismantle the master’s house.” Racial capitalism is even embedded into pop culture in the way that we glorify exorbitance and admire bourgeois culture, which includes fashion designers made popular by their exclusivity and artists who gain fame for accessing that exclusivity.

However, creative expression is one of the most powerful methods of destabilizing systems of oppression and affirming our own growth, resistance, and beings. These edited photos are a form of creative expression where we can access a liberatory reading of “Bodak Yellow” as the anticapitalist femme revolutionary song that it could be. One of the annotated photos in @thathairyfemme’s set reads, “As a former sex worker, I believe all femmes will be vital to our success in the class war… less about personal wealth and more about redistributing the wealth of the bourgeoisie.” Here, @thathairyfemme invokes feminist critiques of Marxist and anticapitalist theories that have not properly analyzed the use of gender and patriarchy in class violence—particularly the ways in which women, femmes, and other feminine folks are not properly compensated for their labor, nor is their care for others (which is work) ever reciprocated.

These words directly contrast with conventional wisdom about class mobility mirrored in Cardi B’s lyrics. (“I used to live at the Ps/ now it’s a crib with a gate”; “I’m a boss/ you a worker bitch.”) “Bootstrap” ideologies—if you work hard enough, you can improve the material conditions of your existence and transcending your class—reinforce the idea that people who face class, gender, and race violence at the hands of our oppressors are responsible for those conditions. Bootstraps theory reinforces the idea that if we, as people living within the matrices of domination, are just positive enough and trust in the system of white supremacist patriarchal capitalism to reward our constant, thankless grinding, we will eventually reach some kind of concession where things are “okay.” I don’t know about y’all, but that’s just not going to work out for me and I don’t believe it’ll work out for anyone else either.

Capitalism doesn’t work “so well” because of positive attitudes, persistence, and a made-up work ethic—it works because of a class of people who are monopolizing, privatizing, and restricting access to resources that have been passed down to them from predominantly generational white wealth. Because white people have used capitalism for their own benefit and to perpetuate colonization as well as white supremacy, this system is inherently rigged against Black folks, communities of color internationally, queer folks, disabled folks, and society at large. But with class mobility comes great responsibility. I get so excited when I see Afro-Latina artists like Cardi B creating dope content, but I want that to come with a commitment to changing material conditions that can raise up the neighborhoods and communities who are supporting said artists. Successful artists have access to an industry full of resources that can be socialized and shared—especially important at a time when creative expression is becoming more and more inaccessible as the Trump administration eliminates funding to museums, libraries, and art programs in educational systems.

I know that Cardi B is but one person in the celebrity-industrial complex, and access for her, as an Afro-Latina and former sex worker, has been harder for her than most. However, I believe each individual has a responsibility to do what they can for the collective good: In Cardi B’s case, this could be anything from educating herself to be accountable for her problematic behavior (the bare minimum, really) to redistributing wealth to different communities of poor, differently abled and gendered Black people. I’m all for Cardi rejecting respectability politics and exclusive elitism in regards to feminism, but she can and needs to pair that with accountability for perpetuating transphobia and continued anti-Black behavior against darker skinned Black women. Cardi could be using her platform to uplift and promote other Black, queer, women and femme rappers who are still trying to navigate the entertainment industry and find opportunities to produce music. These are tasks not just for Cardi to take on, but all folks. Everyone fucks up, but everyone can and should be learning continuously how to best support Black women and femme creatives, and approaching folks while understanding the nuance of positionality and accountability.

And while we should definitely be holding Cardi B accountable, we also shouldn’t look exclusively to celebrities to create content that uplifts our communities. Striving towards collective freedom is community work and collective struggle for a reason. It’s completely fine to bump “Bodak Yellow” and do so not for the song’s sociopolitical messages, but only if we are all aware and able to critically understand the pop culture that we’re consuming. We must understand the sociopolitical meanings produced by our most popular, mainstream media, and from there use them in the service of creating a richer, freer, and decolonized culture.

I set this same bar for consuming not just “Bodak Yellow” but all similar money- and class-conscious hits. Even the most radical content breaching the mainstream is nothing compared to the creations that come forth from a free world and free society. There’s no ethical consumption under capitalism and nothing is completely wholesome (and if you find something to prove me wrong, let me know), so I want us to be able to enjoy things for the sake of them bringing us joy—just as long as we all remember what kind of free world we’re working towards.

It’s important to remember that, as Najma Sharif writes, non-Black people don’t get to politicize Cardi B. But for fellow Black femmes listening to her, we can look to the creation of this viral photoset to imagine what content we could be both demanding and creating ourselves. The strongly anticapitalist narrative constructed by @thathairyfemme’s photo set shows that Black queer femme people already know what we want to create—we just need the means and the access to do it on a larger scale. If we want Black, queer, femme narratives to hit the big screen and to be disseminated beyond constructed borders, we need to socialize the resources needed for such successful creative productions and abandon tired, liberal claims of diversity and inclusion. So, do you have resources? Are you ready to give whatever you have?

And as a working-class, queer Black femme, I’ll end with another picture from the set that I think speaks for itself:

Editor’s note: Since publishing this piece, it has come to our attention that another Twitter account, @prezmomobologna, had earlier posted a thread of commentary similar to the one by @thathairyfemme. 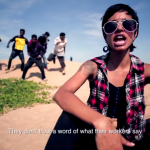 by Sarah Mirk
Nicki Minaj’s hit song “Anaconda” has been remixed as a catchy protest song demanding environmental justice for a city in Tamil Nadu, India.