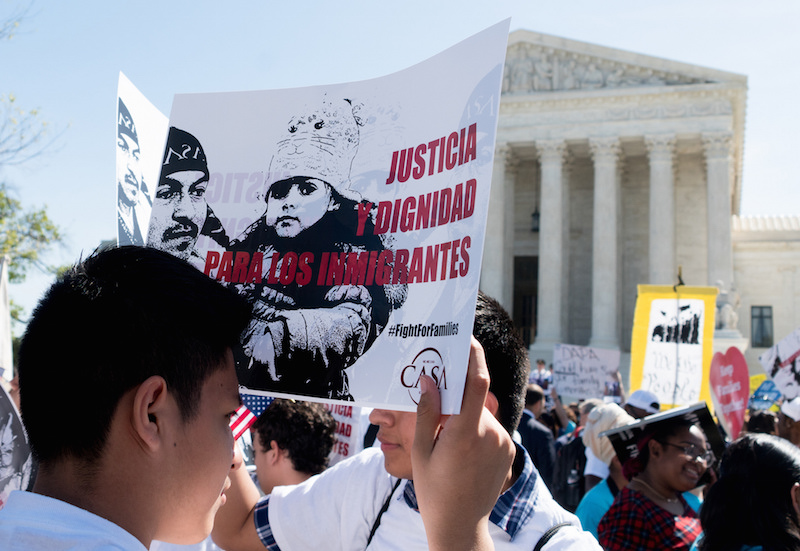 A rally outside the Supreme Court this spring to support the Justices keeping Obama's immigration order intact. Photo by Victoria Pickering.

Anyone else have whiplash from the political news this week? We had good old-fashioned filibuster in the Senate and then Congressional Democrats waged a sit-in to demand a vote on gun control legislation. And THEN today the Supreme Court upheld affirmative action in college admission and deadlocked on President Obama’s attempt to keep undocumented families together, essentially killing the policy.

Supreme Court ruling week is like “Shark Week” for political geeks. We are reminded of the power that the US Constitution places in the hands of 9, err 8, individuals to make grand pronouncements that decide our basic civil rights: who we can marry, when the police can stop us, and if we can take full control of our reproductive functions.

In my conversations with progressive voters this year, I have heard two views of the Supreme Court. The first is that it is important to elect someone who will replace the late Antonin Scalia with a justice who will swing the court one way or the other. Obviously, lefties want a left-leaning justice while conservatives want another Scalia. Then Obama presented Merrick Garland as a middle-of-the-road option that would create a second swing vote á la Justice Kennedy.

The other is that who sits on the court does not impact our day-to-day lives. 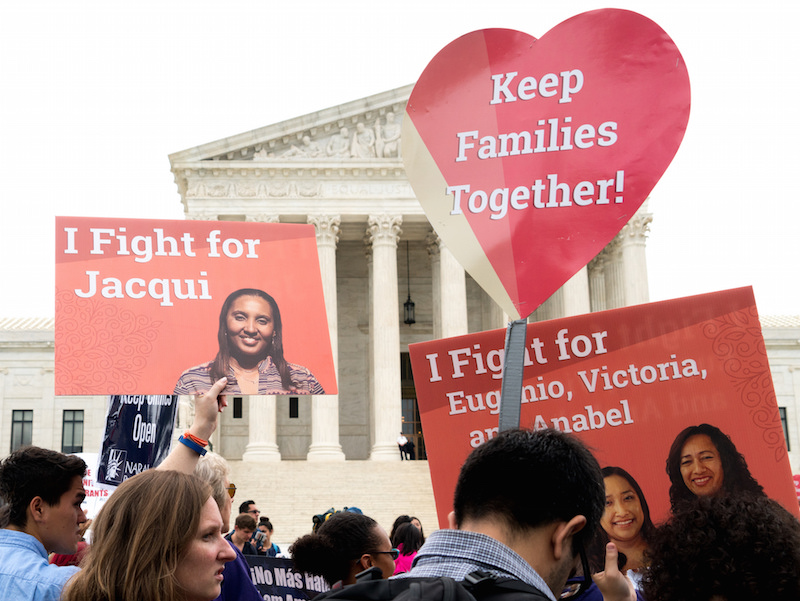 The crowd outside the Supreme Court this morning. Photo by Victoria Pickering.

For lefties, the importance of the Supreme Court has mostly been framed in terms of abortion rights. That’s not a frivolous stand to take seeing as the Supreme Court upheld late-term abortion bans under the misguided notion that women just do not know what they are doing when asking a doctor to terminate a pregnancy. But feminist activism around the Supreme Court can’t end with abortion rights. Where is the outrage over the wrecking of our 4th amendment right to be protected from undue searches, as Justice Sonia Sotomayor railed about in her dissent this week?

I believe this week has given us is further proof that the Supreme Court matters so much in our everyday lives. While talking to voters about their decision between Bernie and Hillary, the theme that the court “doesn’t really matter” has come up in my conversations again and again. These voters are correct in saying that most court decisions happen at the lower levels (where the President still gets to appoint, by the way), but today the Supreme Court’s decision means that the parents of US citizens who are not documented immigrants can be deported. That will impact the lives of millions of Americans in a huge and devastating way. At the same time, the court validated the reality that racial diversity is important to higher education, which will give a generation of Americans who are people of color a better shot at attending college.

In one instance, the Supreme Court can bend the arc of justice faster than any march can. And then in the next breath, it can bend that arc into a hook that pulls us back decades.

As always is the case, each decision from the Supreme Court is not just about that one single case. This is why conservative forces convinced a hurt young white woman to be the face of anti-Affirmative Action despite the fact that white women have been the greatest beneficiaries of affirmative action. As much as the focus of the University of Texas’s affirmative action has been on Abigail Fisher, it was never just about her.

If that is not important to which person occupies the Oval Office, I don’t know what is.

Relevant: What Would It Look Like to Decriminalize Sex Work? Just Ask New Zealand.

by Carla Green
In June 2003, New Zealand became the first country in the world to decriminalize sex work. Their laws are in the spotlight as Amnesty International now supports decriminalizing sex work around the world.