In July of last year, Jeff Amyx, owner of Amyx Hardware in Grainger County, Tennessee, made headlines after he posted a sign reading “NO GAYS ALLOWED” on the front door of his business. Amyx posted the sign after the Supreme Court did not even consider his personal feelings when deciding to make same-sex marriage legal across the land. As a person who would prefer people not be gay, Amyx felt that this decision, as well as various other decisions requiring businesses not to discriminate against customers based on their sexual orientations, infringed upon his right to be a weird bigot and tell people what to do with their lives.

This year, he’s got a new cause! And, surprise, it relates to trans people using the bathroom. Hold on a moment: I will give you a second to go get your smelling salts or do whatever you have to do to keep yourself from dying of shock. The sad, bigoted douchebag constructed an outhouse by his store and placed two signs on it: One read “Transgender bathroom,” and another below it read, “Out of Service Indefinitely.” You know, to really get the Obama administration right in the gut.

Via the New Civil Rights Movement:

We still have freedom of speech in this country,” Amyx told Grainger Today. “Obama is trying to push this down everybody’s throat. But I just want the world to know—everybody to know—that you don’t have to accept it. They can enforce all the laws they want but getting us to comply with it is going to be a different story.”

Referring to the outhouse, Amyx told the newspaper:

“I’m just in compliance with Obama law. He didn’t say where you had to build it or if it had to work…If Obama wants to have a transgender bathroom at the White House, have at it. But don’t tell me I have to have one. And don’t tell me I have to accept their lifestyle. Obama can make all the laws he wants, but God’s law trumps his law.”

Oh man, he got all of us there! Except for the part where he didn’t pay attention long enough to know that it’s not a law yet, that as of right now, President Obama was just talking about schools, and also that the point of all of this was not that trans kids should get their own bathrooms, but that they could go to the bathroom with everyone else, like normal. But when do bigots ever make sense, huh?

It’s almost hard to be truly angry at Jeff Amyx when you take a moment and realize just how miserable and exhausting it must be to be Jeff Amyx. Spending all his days sitting in his hardware store in Tennessee, hungry for attention, worrying that the gays or the trans people are gonna get him somehow. Thinking to himself: Man, God is gonna be so impressed with how horrible I am to people! This is really worth all the effort! Pining away for his school days, when everyone thought he was way cool for giving some kid a swirlie for wearing a shirt he didn’t think was manly enough.

He’s not even a douchebag because he’s hateful. He’s a boring, sad, and soon-to-be-anachronistic kind of hateful. He’s a douchebag because he wants so badly to hurt people, because he wants so badly to be the Lester Maddox of hardware stores, that he’s willing to repeatedly make a fool of himself in national media. If anything, people like Jeff Amyx are the most useful of idiots. They show just how positively ridiculous people look when they’re being homophobic, transphobic bigots.

Relevant: Beyond Walking and Talking 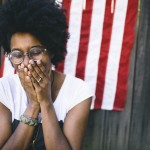 by Andi Zeisler
"We gathered, and that’s great, that's really wonderful. But now what are we gonna do? What do we do next time?"