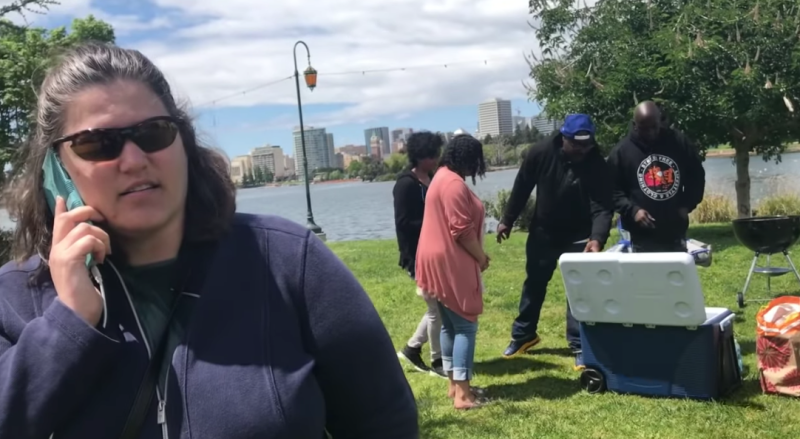 A white woman calls the police on a cookout in Oakland, California (Photo credit: Youtube/Michelle Dione)

This week at Bitch HQ, we received our preview copies of the Travel issue of Bitch magazine. (They’re gorgeous and we can’t wait for you to see them!) I’m mentioning the new issue not just because you should definitely subscribe, but also because in it is a story that gives historical context to travel guides written for Black travelers within the United States. These guides warned Black Americans about “sundown towns,” all-white neighborhoods that practiced segregation and weren’t safe for Black travelers. Sundown towns weren’t subtle about their white supremacy—signs on the roads declared “Whites Only Within City Limits After Dark.”

Of course these were towns where police departments looked the other way—or were actively involved in white supremacist violence.

In April, a video of the police arresting two Black men who were waiting for a friend in a Philadelphia Starbucks went viral. Later that month, a Pennsylvania golf club owner called the police because a group of Black women golfers were, according to him, “playing too slowly.” In California, a neighbor called the cops on four Black friends leaving an Airbnb where they were staying. In Missouri, a Nordstrom Rack employee called the police on three Black teens shopping for prom outfits. In Oakland, a white woman called the cops on a Black family having a cookout at Lake Merritt Park. “Make America Great Again: where you call the police on Black people to try to get rid of them,” an Oakland bystander recording the confrontation muttered.

Last week, a woman called the police to report two Native American teens on a college tour at Colorado State University because she was unsettled by their “odd” behavior and the “dark stains” and “weird symbolism” on their clothes. On the 911 call, the woman (who identifies herself as “an artist”) repeats that the teens “don’t belong” and explains that she decided to report them because “they made me feel sick and I’ve never felt like that.”

And this Monday, a white woman called the police on a Black Yale teaching fellow who had fallen asleep in the common room of her Yale apartment building.

This kind of harassment and threat of violence is part of everyday life for many Black citizens. There’s been a recent wave of incidents like them, but that doesn’t make them new.

In many of these encounters, it is white women calling the police, and in the Oakland video, the bystander calls her right out: mocking the woman, she yells, “It’s a white lady scared, come quick!” Later in the video, the woman who called the police shifts into an award-worthy performance of “scared white lady,” crying crocodile tears the very moment she sees a police officer. (Remember that she originally called the police because a family in the park was using the wrong kind of grill to cook their food, according to her.) These racists aren’t just leveraging their whiteness to report non-emergency events as threatening and suspicious—they’re leveraging the presumed innocence of their white womanhood, just as they have for decades.

Even though none of these situations are emergencies, in every single incident, the police came. For the “crimes” of shopping, sleeping, waiting for a friend, touring a college—in short, merely existing in public—people of color not only face the frustration and inconvenience of an unnecessary, dehumanizing police encounter, but they risk losing their lives. Getting police involved in non-police matters and calling police on innocent people is active endangerment—in 2017, the police killed over 1,100 people in the United States. Tamir Rice’s death began with a phone call like these, a “concerned citizen” reporting suspicious behavior. “Concerned citizens” like Trayvon Martin’s killer George Zimmerman and Renisha McBride’s killer Theodore Wafer have cut out the middleman and killed innocent people themselves.

White supremacy is not always as blatant as those sundown-town signs; white supremacy is also a phone call to the police because someone “doesn’t belong.” Both are threats of violence wrapped in the language of state-sanctioned bigotry.