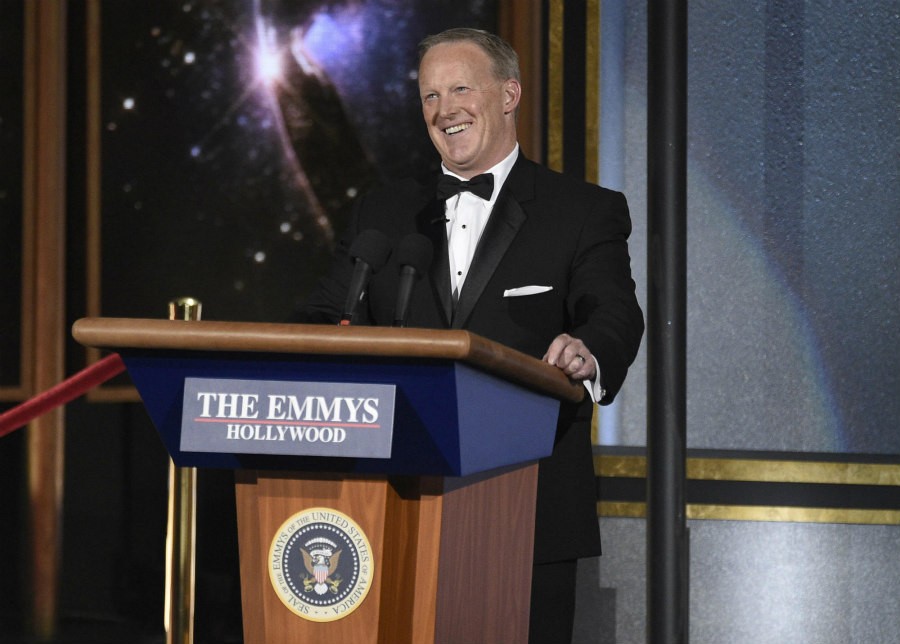 Sean Spicer is a douchebag. Apparently, every reasonable person knows that, except for Stephen Colbert and the coordinators of the Emmys. On a historic night that included Lena Waithe becoming the first Black woman to win an Emmy for best comedy writing and Donald Glover becoming the first Black director to win an Emmy in comedy, the ceremony thought it would be a great idea to bring out the axed White House press secretary.

The Emmys is patting itself on the back for having an inclusive groups of winners. Lena Waithe, Aziz Ansari, Donald Glover, Riz Ahmed, and Sterling K. Brown all won awards. (White) women also racked up gold statues. What, if anything, does that say about the progress we’ve made and how much further we have to go when it comes to representation in Hollywood?

Andi: I’m of two minds here. In the past few years, in large part thanks to social-media pushback and campaigns like #OscarsSoWhite, there’s definitely a sense that the movie and television industries know they can no longer expect to glide by doing the bare minimum. At the same time, it was fascinating to be on Twitter during these Emmys and see actual writers and directors of color reacting to the awards and, like you said, the almost performative “Look! We’re diverse now!” tone. (I saw one Black female TV writer publicly state that she’d been told in meetings that “we already have an Issa and a Donald,” and I would guess that there were a lot more like her who didn’t speak up.) As much as the rise of streaming shows and original cable content has brought a lot more dialogue about diverse and inclusive voices, I get the sense that there’s still a lot of executives out there who think this is a trend that they have to indulge so it doesn’t affect their profits.

Kate: Yes to everything Andi just said, and also, not surprised to hear that most Hollywood executives think that there can just be one actor of color to fill every single role they’ve ever created. That’s what I call “NOws” ie; NOT NEWS.

Evette: I’ll say this: Progress—no matter how minor it is—is worth celebrating. I am proud to exist in a time when Lena Waithe won an Emmy for co-writing a television episode that explored the layers of Black queer women coming out. I am proud of Sterling K. Brown for winning an Emmy, especially for a show that explored panic attacks so beautifully and realistically. However, our work is not done. Complacency is what I fear most. After we’ve made such spectacular progress, we can’t rest on our laurels and hope the system of exclusion in Hollywood will right itself. It won’t. We have to keep pushing, uplifting, and giving these brilliant television creators of color the space to create narratives that really resonate. As for white women, we all what that is. Some of us are brave.

Do you think the Emmys will think its done its job and then fall back into the same whitewashed pattern?

Evette: I think inclusion in Hollywood happens in cycles. In the early 90’s, there were a number of television shows with casts full of predominantly people of color: In Living Color, Roc, Living Single, Martin, A Different World, and Family Matters were all on television at the same time. Then, shows that highlighted some aspects of the Black American vanished from TV for almost 20 years. If we don’t continue to push studios and award shows to both create and recognize these shows, this cycle won’t last either. We’ll get a few more shows from Shonda Rhimes, and then TV will go back to being as white and cisgender male as ever. The upcoming fall TV slate has some semblance of that: CBS’ forthcoming primetime lineup features all men, most of whom are white. There are some exceptions, of course, but we’re definitely in danger of backsliding. 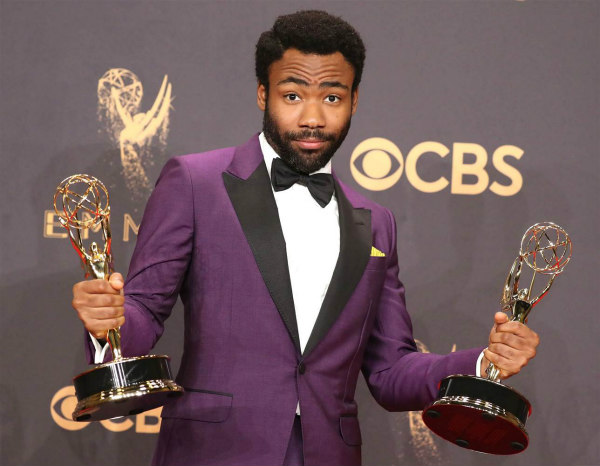 Kate: Yes, and frankly I wouldn’t be surprised if one of late night’s Jameses (Jimmy, Jimmy, James) hosts next year. Or Sean Spicer if he is still “very happy” with his image. More likely though? Probably Kate McKinnon. I’m calling it now.

Evette: I wouldn’t be surprised either Kate. I’d roll my eyes, just as I did this year, but I wouldn’t be surprised. Diversifying hosts is so important. I love when Chris Rock hosts the Academy Awards because he’s really funny and really honest about how Hollywood purposefully excludes people from marginalized communities.

What was up with the Emmys Sean Spicer skit? What was your first response to that?

Andi: Pissed. And really disappointed in Stephen Colbert, honestly. And it was almost worse to see pictures of afterparties where people like James Corden and Seth Myers were kissing and schmoozing with Spicer. He should not get to lampoon himself when he repeatedly, knowingly lied to the American people on the daily; and while an appearance at the Emmys isn’t quite as bad as, say, his Harvard fellowship, it’s another example of how mainstream, white celebrity liberalism can afford to normalize someone who has done demonstrable harm. James Corden’s life and livelihood aren’t threatened; Stephen Colbert’s life and livelihood aren’t threatened. But they should be able to say, “Wait, this is really fucked up.”

My favorite response was from the British actor Jason Isaacs, who posted on Instagram that Spicer “has the aura of a giant festering abscess.” And on Pod Save America, Jon Lovett reported that his friend’s husband went up to Sean Spicer, shook his hand, and told him to go fuck himself. But this whole thing was an embarrassment and should not have happened.

Dahlia: I blacked out. I saw Sean’s face and I couldn’t take the rage I was feeling. 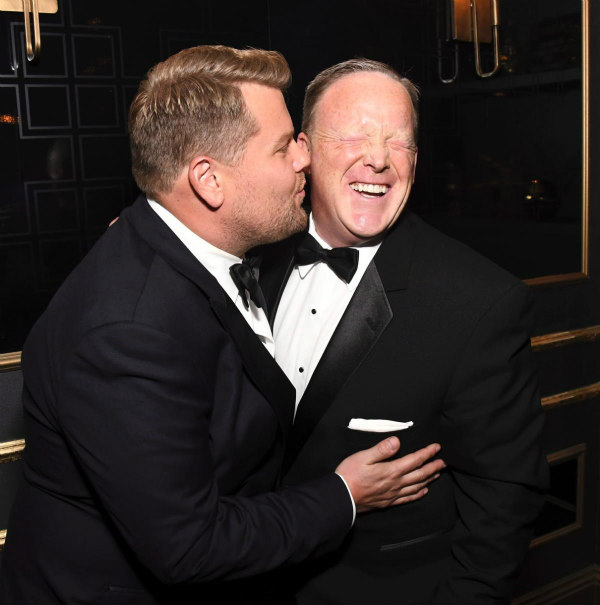 Evette: I was also pissed. Sean Spicer was the official spokesperson for a White House that blatantly lies to the American public to start the process of creating an authoritarian state. It’s very much in line with the government propaganda spewed in authoritarian countries, like Russia—45’s favorite place. Although James Corden and Stephen Colbert think it’s funny to embrace Spicer after he was booted from the White House, it’s actually, in my opinion, very dangerous. It normalizes dangerous ideology. Are we going to pretend like Spicer didn’t call concentration camps “Holocaust centers?”  Their administration purposefully didn’t acknowledge anti-semitism or explicitly support Jewish folks during National Holocaust Remembrance Day. That investment in a white supremacist ideology doesn’t just disappear when he’s fired, resigned, quit, whatever.

Kate: I didn’t see it live which PTL for that because I think it saved me from a blackout (sorry, Dahlia), but in the million clips of it I saw on Twitter, I’d say Sean looked kind of sheepish. He must have known that he had absolutely no fucking business being there and was worried Hollywood would call him on it… but nope! Time for a selfie with James Corden instead.

Do you think that Hollywood is aiding the Trump administration in normalizing authoritarianism and bigotry?

Dahlia: Yes. Sean Spicer participated in Holocaust denial from the White House press secretary podium. He delivered lies about the “Muslim ban” from the same podium. The only person who could think it’s a good idea to bring Spicer onto any stage ever again is a person who is not threatened by the Trump administration’s actions and seeing him on stage felt like a slap in the face to all those who are threatened and afraid of this administration.

Evette: Yes. Although many people, myself included, believe 45 doesn’t have the capacity to form full sentences, he and the people around him are very calculated. They know exactly what they’re doing. Hollywood should know better, but seeing as less than two years ago, not a single actor of color was nominated in the Oscar acting categories, can we ever expect more? 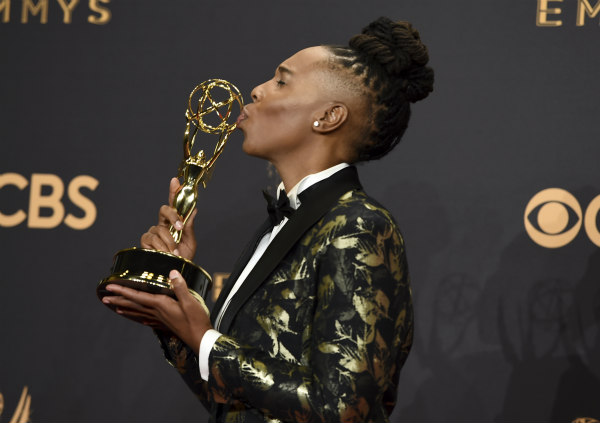 Kate: Yes. Hollywood has a history of normalizing assholes who believe in their humanity and no one else’s. It’s part of what they do. Remember how Mel Gibson is a raging anti-semite? And remember how he presented at last year’s Golden Globes? Cool. If Hollywood is good with Mel Gibson and Sean Spicer, every white person just like them (who holds on to similarly dehumanizing beliefs that can be easily denied or played down) feels just a little bit more comfortable expressing those beliefs. Insecure douchebags promote other insecure douchebags to positions of power. Then they use their douche canoe full of resources to amplify that power and elevate their images. That’s authoritarianism 101.

How can the Emmys soften Sean Spicer in front of such a big audience and also say they’re inclusive? What’s wrong with that messaging?

Andi: They can’t. None of this stuff is real to the people who produce these shows. We fucking see you, Emmys.

Evette: Everything is wrong with that message. I’ve often said that the biggest failure of the Civil Rights Movement is that once desegregation was achieved (or appeared to have been achieved) and we culturally learned that slurs against people of color were inappropriate, it became the singular achievement or victory. Inclusion is not about being able to sit at the same table as white folks. That’s what the Emmys is essentially saying it’s done. “Look, Aziz, Lena, Donald, and Sterling won! We’ve done our job.” No, you haven’t. Inclusion is a purposeful, intentional, and continuous practice. It is not one and done. It’s giving people of color, trans people, people with disabilities, immigrants, etc. the tools and resources needed to continue creating award-winning television. Putting Sean Spicer on the same stage as Lena Waithe is just flat-out disrespectful. You’re forcing her to share a stage with a person who worked in an administration that is rolling back the protections Waithe’s ancestors fought and died for. What is progressive about that? Do better, Emmys.

Kate: Plus 100,000 to everything Evette said. Respect doesn’t feel very sincere when you’re honored for your work and then dishonored for your identity within a span of 30 minutes on the exact same stage.

Did you know we publish an award-winning quarterly? Well, we do! It's definitely time to subscribe.