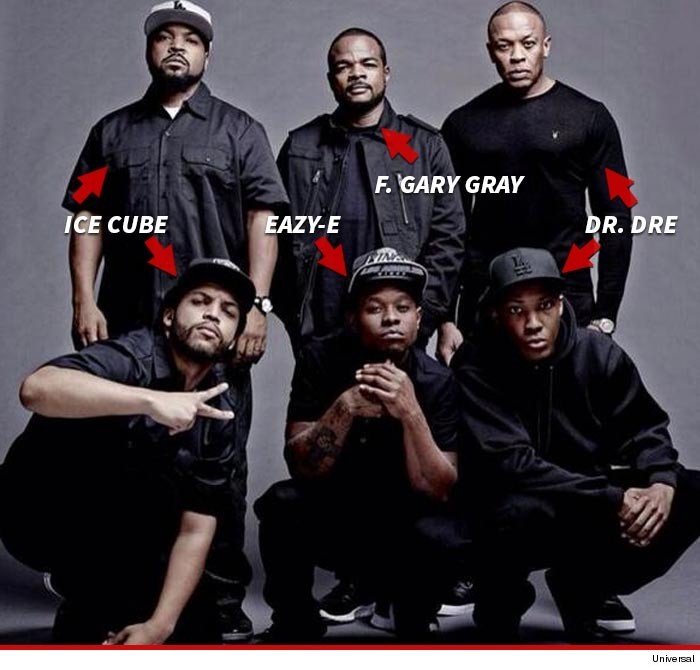 In the 1990s, I went to the Grammy Awards in Los Angeles, and Dr. Dre hit on my sister. That is to say, she walked by and he leered at her and said uuunh!

“He grunted at her?” my friend Donna Daniels would say later, dissing not only his sexism but his unspeakably weak game. I guess it’s like Bernard Lafayette says, “Violence is a language of the inarticulate.”

I reflected on my sister’s distasteful brush with Dr. Dre this week as I read Dee Barnes’ article about watching Straight Outta Compton, the film about the formation of rap group NWA that sold $60 million worth of tickets over the weekend. While the film explores the rise and fall of NWA in the late 1980s and early 1990s, it notably leaves out Dr. Dre’s real-life violence against women, including a high-profile incident where he assaulted Barnes in 1991. Long story short, Barnes encountered NWA as a journalist. She interviewed former NWA member Ice Cube on her TV show Pump It Up! in 1990. Ice Cube said some disparaging things about Dr. Dre and Barnes advocated that the footage not be aired. “I wasn’t even thinking about being attacked at the time,” Barnes said in her Gawker piece. “I was just afraid that they were going to shoot each other. I didn’t want to be part of that….I was told by executives that I was being emotional. That’s because I’m a woman. They would have never told a man that. They would have taken him seriously and listened.”  The producers decided to air it over her objections. Dr. Dre was incensed and took out his anger on Barnes the next chance he got, physically attacking her in a nightclub. Barnes sued Dr. Dre and they settled out of court. But, as Barnes explained this week, Dr. Dre continued to inflict damage on her over the years, blacklisting her from jobs and using his increasing clout to stop her from getting work in the music, film, and TV industries. While Dr. Dre can celebrate inking a $3 billion deal with Apple, Barnes has had to work day jobs to make ends meet and suffers severe headaches emanating from the injury she sustained when Dr. Dre pushed her head into a wall 20 years ago.

At the time, Dr. Dre showed no remorse about beating Barnes up. In a 1991 Rolling Stone feature, Dre said: “I just did it, you know…it ain't no big thing — I just threw her through a door.”

Other NWA members agreed. According to the LA Times: “Easy E told a rap publication, 'Yeah, bitch had it coming' with other members saying in an interview that she deserved it for trying to 'play' them on national television by allowing Cube to make his comment on her show.”

Again, only the woman involved—not even the decision maker about whether the segment should be aired—was made the public scapegoat and the target for the rapper’s rage at what another man said. This is the core of the misogyny: Barnes was a target not because she was actual culpable, but because she was female.

It was only in a recent Rolling Stone interview that Dr. Dre finally copped to some accountability, saying:

“I made some fucking horrible mistakes in my life. I was young, fucking stupid. I would say all the allegations aren’t true. Some of them are. Those are some of the things that I would like to take back. It was really fucked up. But I paid for those mistakes, and there’s no way in hell that I will ever make another mistake like that again.”

I was particularly upset by this response. Even when he admits that beating up a woman was “fucked up,” he chalks it up to youthful indiscretions. He says he “paid for those mistakes”? How did he pay? He has continued to have a career. He’s now being introduced to a new generation as a sort of rap folk hero. No, bruh. The women you beat down paid for your mistakes. You have been coddled and protected. And worst of all, you’re such a coward. Why didn’t you get angry at the male producers who made the decision to air the Pump It Up segment? Right. I see. You go and find a Black woman’s ass to kick. Got it.

It’s also worth noting that, ironically, the director of Straight Outta Compton—F. Gary Gray—was the cameraman on the original Pump It Up segment that led to Barnes’ beating. But Dre has no problem working with him.

Dr. Dre’s habit of beating up women is coupled with a rampant misoyny in NWA’s songs that made their music intolerable. Their rhymes about bitches, hoes, and how 14-year-old girls can “suck dick like a specialized pro” were part of the reason I became disillusioned with hip hop. In the 1990s, I intentionally boycotted all of NWA and Dre's work. But then, in the new millennium, I came across some all-instrumental tracks by Dre. They were brilliant. I refused to listen to any of the versions that included the lyrics. I wound up buying that instrumental CD, Dre 2001, which doesn't include any of the rap lyric tracks. I still use “The Message” as my song when I’m in a loud-ass café, and I need to concentrate. I pump it up in my headphones and I’m in the zone. But to this day, I maintain my boycott of Dre’s lyrics. It’s such a shame that brilliance and such brutality can exist in the same person. Bill Cosby, Tony Mochama, Dr. Dre, are all examples of these painful contradictions among Black men.

That brutality is part of Dr. Dre’s story. We should not—cannot—ignore it. So why was it left out of the film? Many times the stories of violence against women are excluded from stories of men's careers on the misogynist pretext that they are about their “personal lives” and not “relevant” to who those men were in the world. Dre's attack on Dee Barnes wasn't intimate violence, it was a professional beef. If he had attacked a man, it wouldn't have been so easily dismissed from Dre's story. In an offensive moment of shoddy journalism and sexism, E! News simply assumed that Dee Barnes was in an intimate relationship with Dre because he beat her up. A headline from eonline.com reads: “Dr. Dre's Exes, Michel'le and Dee Barnes, Speak Out on Abusive Past Not Being Shown in Straight Outta Compton.” 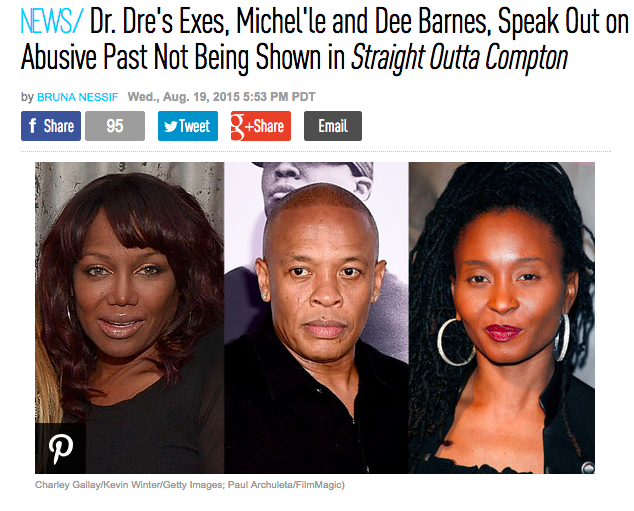 Just to be clear: Barnes is not an ex of Dr. Dre. She is a journalist and artist who interviewed one of his former bandmates. Through Dre’s violence, not only did Barnes lose her career, but she has apparently lost her right to be seen as a professional in public discourse.

In addition, there is widespread speculation that Straight Outta Compton director F. Gary Gray ignored the story about Dee Barnes because it would paint too negative a portrait of a man whom the audience is supposed to root for. According to the LA Times, Dre's attack on Barnes was included in an earlier version of Jonathan Herman’s screenplay for the film. But in the final version, all mention of the attack was edited out.

In the scene, Dr. Dre was described as being in the club, “eyes glazed, drunk, with an edge of nastiness, contempt” when he spots Barnes at the party and approaches her.

“Saw that [expletive] you did with Cube. Really had you under his spell, huh? Ate up everything he said. Let him diss us. Sell us out.”

“I just let him tell his story,” Barnes’ character replied, “That’s what I do. It’s my job.” The conversation continued, then Barnes threw her drink in Dre’s face and he attacked her, “flinging her around like a rag-doll, while she screams, cries, begs for him to stop.”

As film critic Nijla Mu’min noted, Dr. Dre is a producer on Straight Outta Compton. He likely had a hand in shaping which stories were included in the film. But he doesn’t get to control what stories are told about the film. I applaud Dee Barnes' bravery in watching the film and speaking up about her own traumatic experiences.

Barnes explains in her article that she didn’t want to see her beating onscreen and is glad it was left out. “The truth is too ugly for a general audience,” she said. However, she did want the incident acknowledged. Barnes wrote, “When the movie’s timeline skipped by my attack without a glance I was like… ‘What happened?’ Like many of the women that knew and worked with N.W.A., I found myself a casualty of Straight Outta Compton’s revisionist history.” Barnes’ erasure from the story of NWA is particularly bitter. Perhaps, if she had been able to go on to her own lauded professional success over the past two decades, she would have her own underdog tale. Instead, the boys club closed ranks, and she was largely shut out of the profession.

So Straight Outta Compton celebrates the heroic triumph of the Black male rags to riches story. But from my perspective, they triumphed at women's expense. And if you include Dee Barnes' story in the picture, they certainly don't all come out looking like heroes. 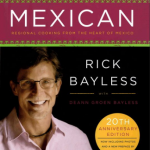 by Eva Recinos
These podcasts, books, and talks are great starting places for thinking about race and food.