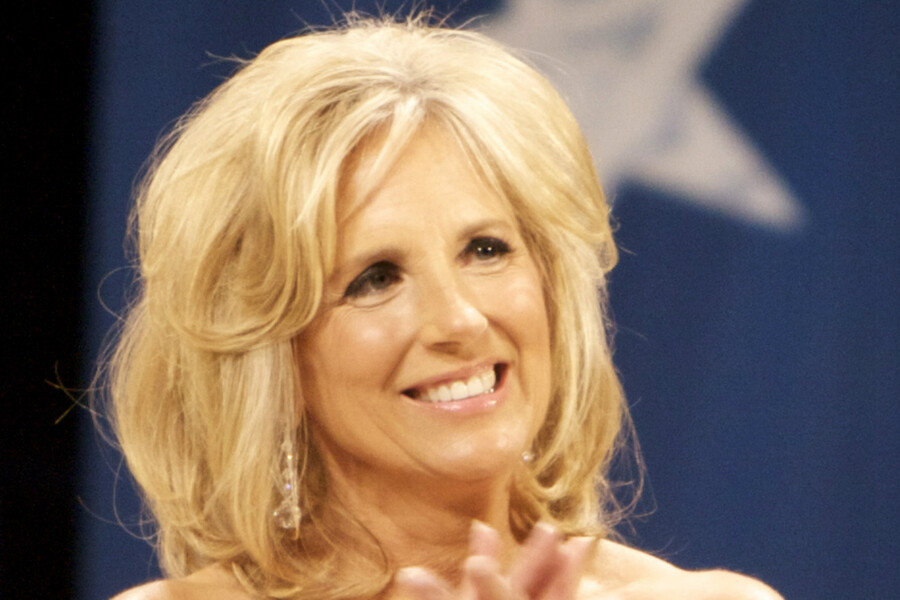 The recent hubbub about whether or not Dr. Jill Biden, who has a doctorate in education, can rightfully call herself “doctor” is a timely reminder that the train upon which patriarchal mores ride is never late, and we will continue to project meaning onto the symbolic nature of the Office of First Lady and the women who hold that position. By now most have heard about Joseph Epstein’s insulting and nonsensical op-ed in the Wall Street Journal, which suddenly brought him broader name recognition. I literally had never heard of him before this moment, though he’s a former instructor at Northwestern University and editor of the American Scholar—by suggesting that because Dr. Biden is not a medical doctor that she should consider calling herself Mrs. Biden, Jill, or “kiddo.”

“‘Dr. Jill Biden’ sounds and feels fraudulent, not to say a touch comic,” Epstein wrote. “A wise man once said that no one should call himself ‘Dr.’ unless he has delivered a child,” he continued. “Think about it, Dr. Jill, and forthwith drop the doc.” Dr. Biden is an accomplished and educated 69-year-old community-college professor who just so happened to marry President-elect Joe Biden. One would think this would preclude her from the label of kiddo, but Epstein garners bonus misogyny points for finding a term that would allow him to be  both infantilizing and sexist. On top of the insult, he then added a dash of elitism to the mix: Epstein elected to shit on the fact that her degree was conferred by a public university (as are the majority of degrees in the United States). Somehow, the fact that her dissertation presented a clear-eyed and visionary way to improve the experiences of community-college students based on her three decades of experience as an educator is framed as a failing rather than an accomplishment. It’s also worth noting that Biden earned her doctorate at age 55, which signifies a level of grit, determination, and multitasking I’m not sure Epstein knows anything about. It has to be said that Epstein notes that he has a doctorate, albeit an honorary one, which is why he doesn’t call himself Dr. E.

Epstein could have saved himself some grief and pushback had he simply done his research. His argument might have been easier to take if he had led with Associated Press style, for example, which states that anyone without a medical degree should be referred to with their name followed by PhD. (We’d refer to Biden as Jill Biden, EdD.) But instead, Epstein dug his heels into the condescending mansplaining route. There’s something so insidiously patriarchal about the idea that because a First Lady wants to bring all of herself—including an honorific she has earned—to the role, she has to be subjected to the not-even-clever criticisms and condescension of men who likely couldn’t maintain a relationship, raise children, and have full and accomplished professional lives without the presence of a Dr. Jill Biden. Epstein could never manage the accomplishments of Dr. Biden, and yet he’s in a position to so confidently and thoughtlessly criticize her without feeling an ounce of shame. In fact, one of the first thoughts I had when President-elect Biden won the White House was, “There’s a woman with a doctorate in the White House after four years of proud anti-science politicians flouting their ignorance.”

I also thought about the ever present and persistent nature of microaggressions that women and femmes in academia, particularly women of color, deal with. Epstein notes that he has to get people to stop referring to him in honorifics; that seems like a given for a white man in the United States, both within and outside of academia. White male privilege automatically confers respect and honorifics even when none should apply. Unfortunately, the rest of us have to fight for people to stop assuming automatic familiarity. As an adjunct professor at three institutions—one in Texas, the other two in New York City—the most elite college where the majority of my students were white and several of them male is the space where I had to most consistently demand the respect of being referred to by my last name. “I am not your friend or your colleague,” I said after weeks of receiving condescending emails from my students using my first name.

The director of my program, a supposedly woke white man, seemed perplexed and dumbfounded by my inability to break this habit before I informed him and others that it seemed likely that my students had never had a Black woman teacher in their short lives, let alone bothered to learn and use the proper title. While it was common for them to have white teachers who might have encouraged informality, it was an extension of the hierarchy embedded in our white supremacist paradigm with echoes of ownership and slavery for them to assume that—even though I was decades older than them and there to teach them based on my expertise—they still were entitled to refer to me as if we were peers. After that moment, everybody referred to me as Professor Sanders. It did not matter that I was an adjunct and technically Instructor Sanders. What mattered was that they needed to learn to respect women and to actively do better. In a class about how to use intersectionality to combat persistent inequality, what better way for them to confront their own barriers to being better than to begin with their ingrained behavior?

It was an instructional moment for me too. There’s no greater power in life than naming yourself, especially as a strong woman or a woman in leadership. Patriarchal capitalism demands that if women don’t solely produce the property of men—or babies—they at least need to be ashamed enough to hide all other ambitions or aspects of their identities. Take, for example, Supreme Court Justice Amy Coney Barrett, who replaced the iconic and legendary Ruth Bader Ginsburg on the bench.  I’m sure she has fine credentials, but much of what I know about her centers on her claims to the proper codes of domesticity—that she is Catholic and the mother of several children. Much of what we can gather about how she will move forward in her decision-making is summed up by these facts. The identification or lack thereof of women leaders with mothers and motherhood, particularly First Ladies, is also historically telling about the work of shaping an identity and of naming oneself in the public sphere.

There are no simple rules for navigating centuries old deep-seated beliefs about the value of educated and smart women.

For example, we don’t call Anna Eleanor Roosevelt by her full name. She was likely named for her mother Anna Hall and chose for whatever reason to go by her middle name, perhaps to have a differentiation between her mother’s life and her own. And who can forget when former executive and Princeton-educated lawyer Michelle Robinson Obama, called herself mom-in-chief? What a powerful reframing of the importance of the job. What a significant description for someone right-wing jerks insisted on calling a “baby mama.” The First Lady, however, is, above all, a symbol. So of course Obama’s cute nickname frustrated feminists the world over. Why was this high-powered Black woman choosing to be domestic when she could step fully into the expansive power that is the First Ladyhood of the United States? On December 13, Dr. Biden tweeted “Together, we will build a world where the accomplishments of our daughters will be celebrated rather than diminished.” The post was a clear and sharp response to Einstein’s op-ed, and a call-out to those who stood with him and chose to question Biden’s education rather than to cheer it on.

Patriarchy is persistent. Women, especially older women, are cast as falling outside the cult of true womanhood once they’re past their reproductive years. Given these two facts, I don’t feel confident that we will build the world Biden dreams about anytime soon. But beginning to have conversations like this is a start. And the fact that Biden will be the first First Lady to continue her day job as a professor at Northern Virginia Community College is telling. All of this is a reminder that there are no simple rules for navigating centuries old deep-seated beliefs about the value of educated and smart women. Because we know this is true: No matter our race, class, or profession, we will still be considered targets for demeaning, inane commentary by men who don’t have the capacity to match our intelligence or accomplishments. They will be given the platforms and the power to share this commentary—and we will be forced to respond. Education has always been and will continue to be a path to choice, especially for women. It is, in short, a path to greater freedom. In her Pulitzer Prize-winning 1987 novel, Beloved, Toni Morrison wrote, “Freeing yourself was one thing, claiming ownership of that freed self was another.” For anyone who has earned an advanced degree, don’t let anyone shame you for calling yourself by the name that reinforces your freedom. It’s good not only for educated women, since they’ve already earned the credential, probably in spite of many odds, but it’s even better for the young women and femmes watching them, trying to walk in their  shoes and will, no matter what they call themselves, follow their lead.

Read this Next: "All the Single Ladies" Shows that Being Single Is Nothing to Freak Out About