Artist Ebin Lee on Being Black in White Spaces 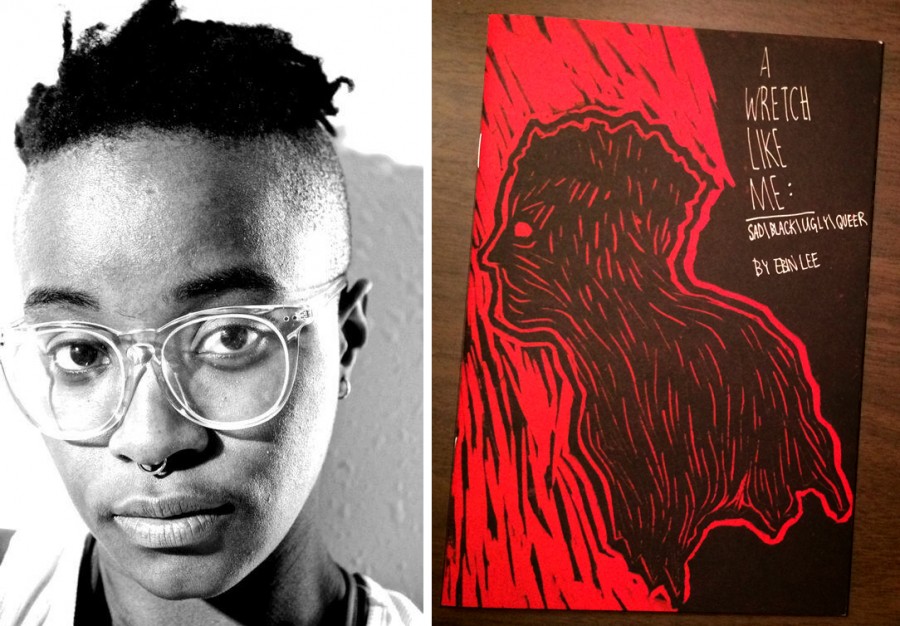 Between the crimsom red cover of artist Ebin Lee's first publication are stark black and white illustrations—a sketchbook of the best sort. In A Wretch Like Me: Sad/Black/Ugly/Queer, released last month by Sparkplug Comics, you can feel Lee working, mining, and digging through themselves. As a reader, I can't help but come away feeling the pain and subsequent catharsis of Lee's art as they explore their experiences being a queer Black person in white-dominant spaces. Originally from Chicago and now living in Portland, Oregon, Lee's illustrations are bold, unapologetic, and crushing in their exploration of anti-Blackness and mental health from the abstract to the concrete. 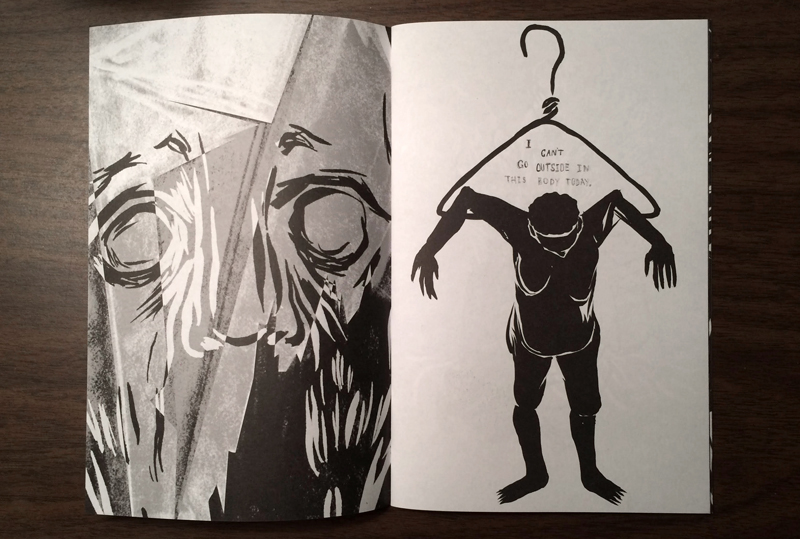 AMY LAM: How did you arrive at becoming an artist?

EBIN LEE: By becoming a writer first. I went to school for journalism, then I discovered illustration existed and that there's a way to make it work financially—kind of [laughs]. I decided that it's pretty much all I ever wanted to do. It was by mistake, complete mistake, out of not wanting to do writing. But now I'm doing writing anyway.

Also, I've always been doing it since I can remember. It's the typical artist story of, “I've been drawing since I was little.”

Why illustration and not another type of visual art?

It's because I've always wanted to tell stories. I'm not the best speaker, but I realized there are different ways to communicate to people. There are different ways that people pick up information and I can reach out to people who are more visual. There's a dynamic in telling stories without words. Illustration was a way where I could get away with my style of writing, which I've been told is not good. It made me more comfortable in writing. Illustration is a more accessible form of storytelling and that's why I picked that. It's also one of the art forms they tell you that you can get a job with.

I was looking at your website. The homepage says “Ebin Lee, Anxiety/Illustration & Design,” and your new book is called A Wretch Like Me: Sad/Black/Ugly/Queer. Your art frames your anxiety and your mental health with what it means to be a Black person in white spaces. Can you talk more about how your anxiety intertwines with the experience of being a Black person in white spaces?

There are two parts to it: The anxiety is real, that's its own thing. Separate from that, there’s the racism and being Black. No matter what field I go into, as a Black person, you get treated the same way. Even in my dumb food-service job: It's hard to work [there] and be Black. You just have to do so much more work and yet deal with so many different things, there's no way to escape it. So I may as well do whatever I want to do. Some people internalize it in order to deal with it; I've internalized some of it. But one way to deal with it is through art; it's cathartic in that way.

I tried to do a project a long time ago that I ended up incorporating into the book. It's about this very typical experience with bedbugs. It's about feeling like an insect, feeling like there's no place for you to settle. That tips off a lot of the art I make. It makes me feel so vile. You come home and everything is torn apart, there are bugs everywhere. It also reminds me of how housing here has always been unstable.

I had to find a way to make it work out in art. It's been a way to process all of that. With the bedbugs in particular, it was a metaphor for being Black here and everywhere in the world. And being queer, in my family it's not considered a good thing. It's the feeling of being an insect, or some kind of alien. Some kind of creature that isn't right, nobody wants you around. You're an invasion. It was a metaphor for being at art school, when I didn't feel like I fit in originally.

Can you talk more about how race specifically plays into your work?

White people get to do art about being white, just by the art that they make and it's never defined. And no matter what I do, as a Black person, it will always be, “Oh, you are liked because you're Black. Your art is liked because you're Black. Of course you did a project about Blackness, so people have to like it.” No, they don't. I cannot care what people are going to think. My experiences have never been validated by anybody, growing up a Black woman. I just have to do it myself and validate my existence by doing what the hell I want to do. And I was right. I felt like my art became more authentic. In the book, there's not a lot of words. Because I just wanted to show people what I'm talking about, I don't want to necessarily have to explain everything. The paranoia of making “Black art,” it's not an easy thing [to deal with].

In dealing with this tension and weirdness and I decided, “Fuck it, I'm just going to do it because it's never going to go away. Why not? This is what I'm dealing with. This is what I feel more passionately about.” I think a lot of white people think people of color just cop out with race art because it's “easy” and people are going to feel bad. That is racism right there. They don't understand how much of a day-to-day experience it is. It's not like, from 3-5pm, all people of color and Black people experience racism. It's from morning till night, it's every single thing. You can develop entire pathologies of the mind that don't go away due to this. I don't understand why it's a “cop-out,” it's actually really hard.

And it’s same thing with having depression and anxiety. People who do art about that, or talk about that very openly, are often told, “Of course people are going to respond to that, everybody loves a sob story.” No, actually: In my day-to-day life, people don't like listening to people who are sad and emotional. People don't like to talk about their mental illness. It's embarrassing, it outs you as being weak in some way. But a lot of people have these things. There’s also how my queerness intersects and informs my art because my work is mostly autobiographical and being queer has informed how I see and interact with the world and how it responds to me.

It's interesting that you made the metaphor about the bedbugs, because oftentimes when we think about bedbugs, they're this unseen, invisible thing that's all over you all of the time. As a person of color, you can feel that with racism. But then for people who don't often experience racism or are unfamiliar with that, they can be performing microaggressions that seem invisible to themselves all of the time.

Completely. That's why I think I'll never do a talk again, or maybe just not one where the audience is mainly white. Because I'll have people come up to me afterwards and say something that makes me think, “Have you taken anything in? Do you think I'm talking about other people? You're not seeing yourself as part of the problem.”

I don't want to teach anyone. I'm not trying to get sympathy. When I’ve been asked to speak, I speak from a first-person experience, as one Black person out of many. It's just my experience and I just want people—especially white people—to just listen to what I'm saying. I don’t want them to come up to me without examining themselves and how they contribute to that, because they often will say something that is condescending.

Once I spoke at Sister Spit in Portland, [reading pieces] that I used in this book. I went out dancing later that night and this person comes up to me and taps my shoulder and said, “Oh, honey. You did a good job. I feel weird in Portland too. I don't think it's a race problem. Everybody feels weird.” It's those kinds of things.

When you say you don't want to teach anyone, what do you mean?

I've been stuck in so many awkward situations. Especially if I have to do it at the actual jobs that I'm at. I feel like I'm working two jobs, one that I don't get paid for and one that makes me feel like a freak. Like when people sneak in questions about race, or try to start conversations about certain topics without doing the work of just simply Googling it themselves to see what's already been posted on the internet. [Laughs] 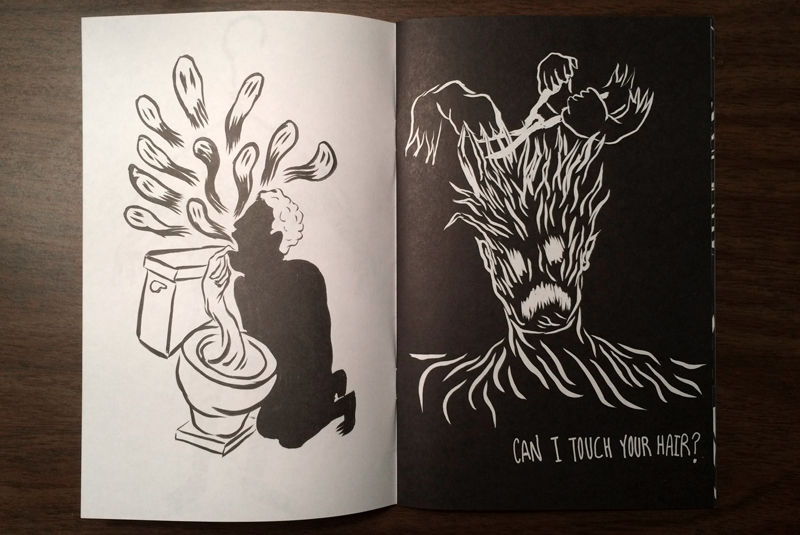 In hearing you talk about this, I can feel the frustration. It's tangible. In looking at your work, it just feels there's so much pain there. Is it a cathartic experience for you to explore your sadness and your anxiety through your art?

Yeah, I think it's the only place I've been able to do that, in a way that is 100 percent something I get control over. It's just fantastic because through line work, all of that graphic imagery, I can purely express what I feel. You can't really put a lot of things into words, and a lot of things are better left unsaid too. But if you can put it in a visual form, many things can be picked up on. Drawing is just awesome because it's just a different part of the brain, a different language completely. There's just something awesome about seeing something, physically holding it, being able to sit with an image. That somebody can sit and look at it and interpret it anyway they want to. I think that's pretty powerful.

At this point in time, this is the way that I deal with painful with things that are hard to talk about, and are things that I don't fully understand about myself yet.

There are some images that are very abstract and are just shapes. There are pieces that are more direct, and are concrete images. How do you decide when you're going to do a more abstract piece versus a more concrete piece?

We all have a base understanding of anxiety and depression. We can Google what all of these things are. But I want to explain it without words, and it's just really fun to do, to channel anxiety into a drawing instead of being anxious. There [is] this one panel [that's] a comic with words, and it's very direct and people will know what it means. And then I have this drawing that's just a bunch of lines that are going in all different directions. Some times the more abstract images make more sense visually.

There are these patterns that go everywhere, they feel uncomfortable. That's just to break the space, to make the person who is reading it feel something. It looks how I feel. It says what I [tried] to say in the comic with words but wasn't able to.

Check out Ebin Lee's collection A Wretch Like Me: Sad/Black/Ugly/Queer and Lee's illustration for Sister Soldiers: On Black Women, Police Brutality, and the True Meaning of Black Liberation. 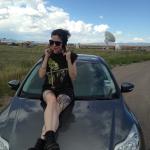