“Gloria Steinem, take heart…. These days, the Top 40 is all about girls on top…. We’ve witnessed a sea change in the traditional male-female roles in pop.” —David Browne,

“We’re dealing with longstanding women artists who feel their songs are important, and we basically agree. And we owe it to our readers to not just treat them like furniture.” —Blender editor Craig Marks, New York Press (May 2, 2001)

Whether a music writer makes a living marshalling lyrical evidence for supposedly new trends or manufacturing arguments to shore up tired clichés—and whether you applaud women’s progress in the musical arena or not—one thing’s clear: Women in music, prevalent as they may be, are consistently positioned as an aberration or an exception. Even the phraseology is troublesome: “women in music,” “women in rock,” and the erstwhile “year of the woman” (thanks for the generosity, guys).

These days Rolling Stone’s longstanding formula—big sales plus tiny outfit equals cover photo—is being copied and embellished by some upstarts. The first issue of Blender, the new music mag from the folks who bring us Maxim, hits stands as we write this; its cover features Janet Jackson wearing a scanty bikini and a come-hither stare. The year-old Revolver counts one single, solitary woman among its editorial staff—but more than makes up the difference by including strippers, Play­mates, and porn stars as props in articles about up-and-coming male bands in almost every issue. (We’re not surprised that George “my penis is a guitar” Tabb is a contributing writer.) The rocker surrounded by sexualized and readily available women is a seminal image of rock ‘n’ roll; though it often seems as outdated as Steven Tyler’s plunge-neck jumpsuits, it persists in coloring women’s experiences in the music industry (page 70)—even when it’s the guys who are shilling the sex appeal (page 66).

But—of course—it’s a lot more complicated than that. Popular music has always been dozens of things at once—an accessible platform for a uniquely female perspective, a battleground in the sexual revolution, a history lesson, a fashion show. Women are and have always been creators, collaborators, chroniclers, consumers, muses, and ornaments. Within these varied roles, contradictions abound. Take the fact that the platinum-selling women Entertainment Weekly touts as taking over the biz are mouthing lyrics penned by men, over beats produced by men. Take former groupie Cynthia Plaster Caster, once amusedly dismissed as a particularly crafty starfucker, now a highly respected artist whose casts of famous rock cocks enjoyed a retrospective at the edgy New York gallery Thread Waxing Space last summer; this year, she’s the subject of a buzz-heavy documentary on the festival circuit. Take Madonna’s entire career. (And take Keidra Chaney’s fandom experiences, page 48.)

With our music issue, we set out to take on this complicated, contradictory, messy world in all its glory and horror. One thing you won’t find here is what might seem to be the most obvious: band interviews. We made that decision for the simple reason that the musicians we admire and love would fill a year’s worth of Bitch, and, frankly, we just didn’t know where to start. We chose instead to focus on the business of music—with interviews of women at record labels big (page 58) and getting big (page 72)—and some often-ignored feminist history (page 60).

No matter how hard we tried, though, some stuff got left out: We were eager to send a reporter to SisterPhyre, a cancelled women in hip-hop conference that was set to take place this spring in Atlanta; a look at the notoriously boy-dominated electronica scene would doubtless have been interesting. Luckily, if we forgot something this time, we can cover it later. We’ve never meant to be exhaustive, and magazines are kinda like a long-running conversation that never has to end.

Speaking of which: We’re back. Oh, you didn’t know we were gone? Well, this was almost our last issue. What with day jobs and printer bills and just being plumb burned out, we came pretty close to hanging up our red pencils. But after many dramas, discussions, and spreadsheets, we decided to quit those pesky day jobs instead and do even more Bitch—four issues a year, to be exact. (But we need a little time to get going, so our new schedule won’t start ‘til next year.) We’re pretty glad we decided to stick it out, and we hope you will be, too. —eds.

The "notoriously boy-dominated electronica scene" is something I have thought about in the past quite a bit. In particular I've always wondered why despite releasing under their own names (Bjork, Tujiko Noriko etc), some women (who often are also vocalists) are automatically assumed to have a male producer behind their beats.
Those interested in learning a bit more about women in electronic music are encouraged to check out a group on Last.fm - <a href="http://www.last.fm/group/Women+in+Electronic+Music">Women in Electronic Music</a>

Great article!<br><br>
Some might also appreciate knowing about an independently produced CD compilation project from 2006 (curated by myself, along with 48 all-women artists from around the world) called "Women Take Back The Noise" -- also listed at Last.fm<br><br>

Relevant: Natural Velvet Disrupts the Whiteness of Rock with “Kristina” 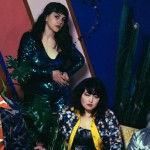 by Evette Dionne
Their sound is very brash, loud, layered, and interpreted as traditionally masculine.