“Gotham” Abuser Edward Nygma and the Myth of the Nice Guy 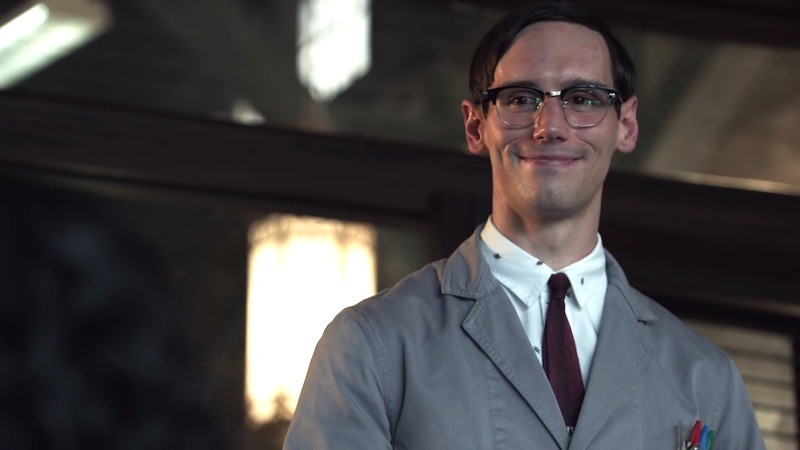 This article contains plot details of the first two seasons of Gotham. It also discusses domestic violence in graphic language.

It never starts with violence. That would be too easy. If an abusive relationship began in a burst of violence, who would stay? Rather, it begins with tender intensity that rapidly escalates into obsessive control. It begins with someone who convinces you that they alone can give you what you need, that they alone can save you from being hurt by your demons, your friends, your family, yourself. So when the violence starts, you are quick to blame yourself. He is the one who saved me. He is the only one who loves me. He would never mean to hurt me.

That’s how it happened for me, at least. A Nice Guy™ asked me to dinner, then to a movie, then told me he was in love. He was so much in love, in fact, he couldn’t bear to be apart from me. He made me think he was the only good part of my life. My friends, my family, my education—they were all bad. Then the abuse began: the slaps and punches, the rapes and beatings. And the whole time he insisted, “I’m doing all of this because I love you so much. I would never hurt you. I would kill to make you happy.” No one who saw us out together would have thought anything was amiss. We looked normal, happy. We didn’t fight in public, and no one would have described him as threatening. Perhaps he was a little too enthusiastic with his attention when we were out together, a little clingy. But he was my boyfriend. He loved me. He was such a Nice Guy™.

The insidiousness of the Nice Guy™ is what Fox series Gotham gets so right in the character of Edward Nygma. Now in its second season, the crime show is an original story set in the world of Batman comics. Batman fans will know that E. Nygma is The Riddler’s secret identity. What is so compelling about the character, though, is not the fact that he becomes a villain but rather the way in which his transformation is revealed. Nygma is a perfect representation of what happens when a Nice Guy™ does not get what he thinks he deserves. 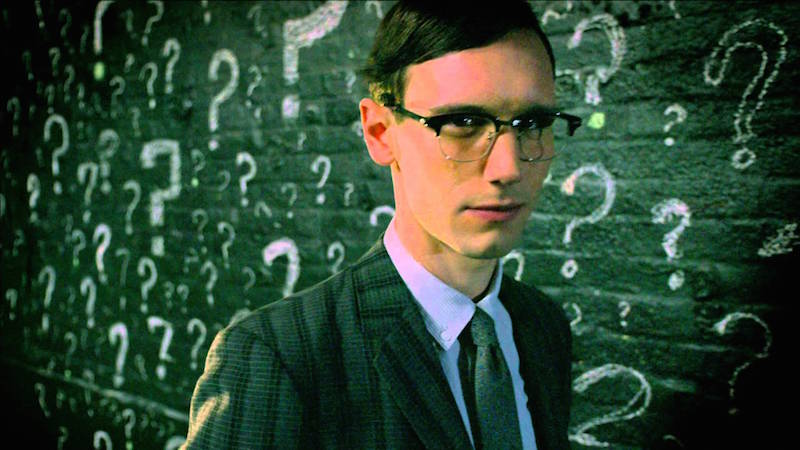 The Geek Feminism Wiki defines Nice Guy™ as a man “with a fixation on a friendship building over time into a romance.” He “regards a man’s relationship with a woman as successful or valuable only if it is romantic or sexual in nature” and “expects, at some point, sexual ‘payment’ for his kindness and generosity.” In the Nice Guy™’s mind, he is a hero for not raping or hitting women. He thinks he’s only single because women who don’t know what’s best for them and prefer bad boys. Nygma’s character is a common variation of the Nice Guy™, the White Knight, a man who’s “actively working to ‘rescue’ a woman in distress.”  Typically inexperienced sexually and romantically, White Knights are drawn to women with abusive and/or traumatic pasts. They expect the rescued woman will be “so overcome with gratitude” that she will reward the White Knight with sex or romance.

When we meet Edward Nygma in Gotham’s first season, he is the awkward, nerdy forensic examiner for the Gotham City Police Department. He uses riddles as (ineffective) ice breakers and harbors a crush on Kristen Kringle, the records clerk. He tries to “help” her by reorganizing all of her files—much to her frustration. He justifies her obvious lack of interest in him by blaming her taste in men. She just doesn’t know what’s good for her. When her new boyfriend, Officer Tom Dougherty, becomes abusive, Nygma sees his chance. Like a true White Knight, he decides that only he can save Kristen from Dougherty and stands guard outside of her apartment. When Dougherty approaches the apartment building, Nygma accosts him and warns him to stay away. When Dougherty keeps coming, Nygma kills him. 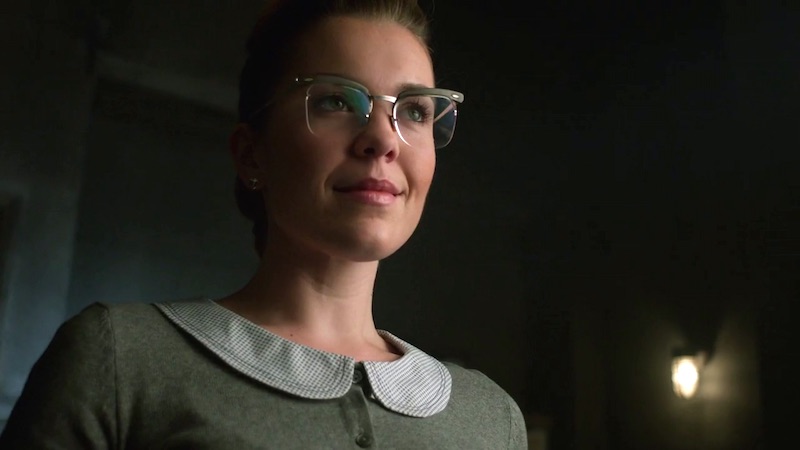 I admit, there is a part of me that cheered at Nygma confronting the abusive cop. He was a callous abuser, and there is something refreshing about seeing such a man suffer consequences for his actions. This is exactly what makes Nice Guys™ so dangerous—their actions may, at first, seem good or even heroic. But their motives are not so pure. For Nygma, taking a stand against Kristen’s abuser was not an act of justice, but rather a means to an end. A transaction for which he expects payment.

In season two, Nygma’s true self begins to emerge. Thanks to some powerful writing and acting, we see both the Nice Guy™ veneer and the manipulative violence lurking underneath in scenes where Nygma argues with his reflection in a mirror. After trying and failing to ask Miss Kringle out, his reflection mocks him: “She doesn’t like you… Maybe she’ll like me. I got confidence. Ladies love that.” Two episodes later, Mirror Nygma says, “What you need to do is stop mumbling and fumbling and tell her what’s up… you saved her life! For God’s sake! She owes you. Take what you deserve.”

Eventually Nygma does get up the courage to ask Kristen out, and ask he does, again and again and again. After numerous rejections he does wear her down, and the two begin to date. For a brief period, they are happy, but it is a short-lived happiness. Nygma, convinced that he has “won” Kristen’s hopeless and blind affection, decides to tell her the truth about her ex-lover’s disappearance. Instead of giving him the gratitude and reward he had expected, she becomes (reasonably) very upset, threatens to call the police, and tells him he is a freak. When she tries to escape their confrontation, Nygma grabs her and drags her back. He covers her mouth so she cannot yell for help, then puts his other hand around her throat. “I would never do anything to hurt you…. I had to kill him because he hit you. Do you understand that? I did it for you…. I’ve loved you since the first moment I saw you.” It’s a harsh and violent scene.

My own abuser was not a murderer—although I do not doubt that he could have been had we stayed together longer. However, he did suffocate my ability to speak out by convincing our mutual friends that I was unfaithful and a pathological liar. We had one friend who saw through his deceit and attempted to confront him. In response, my abuser spread accusations that this friend had raped his (my abuser’s) sister. He threatened to go to the police if the friend didn’t back down. Afraid of the consequences of this accusation, the friend backed down. No one else who saw us together would have believed him capable of violence—he was always attentive (if not smothering) and affectionate in public. Years after we split up, he insisted that he had loved me, that he loved me still, but I was not ready for a real relationship. I’m sure that, in his mind, he was like Nygma—a Nice Guy™ who did not get the respect and gratitude he deserved.

Read This Next: How Fargo Captures the Sad Realities of Toxic Masculinity
Read This Next: Batman v Superman v Misogyny: The Antifeminism of “Dawn of Justice” 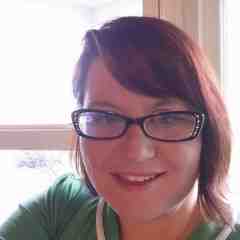 Karyl Anne Geary works on a children’s psychiatric unit. She is the founder of the Rojong Yoin Writing Community in Louisville and is working towards an MFA in Creative Nonfiction at Spalding University. Her essays and poetry have been published in Lunch Ticket, Sweet, New Southerner, so to speak, Stonecoast Review, IUSoutheast Review, and Barbaric Yawp. She is currently working on a collection of essays about growing up in Kentucky, and a segmented memoir about healing from personal trauma while simultaneously working with child trauma victims, and blogs at karylannewrites.wordpress.com.

If the genders were reversed, how would the "nice gal" be seen?

The same way, anyone can be the nice gal or guy if they are kind to someone and expect far more in return as well as unable to take no for an answer. Oh and delude themselves into believing they are inherently good and justified in their behavior for having affection/feelings for someone else.

Great article! I'm glad this is talked about once again. The whole Nice Guys thing is so disturbing.

This is why the Joker has always been an alpha: he's not murdering people to be liked.

by Evette Dionne
Unfortunately, there’s not much to choose from.