The Brilliance of Effie Brown

The cast of Project Greenlight

Effie Brown is the only reason to watch Project Greenlight. But she is a very good reason.

Project Greenlight is an HBO reality TV series where emerging filmmakers get the chance to direct a feature film with mentorship from stars like Matt Damon and Ben Affleck. In the first episode, a group of industry pros choose the lucky director, and we follow trials and travails of actually making of the film for the rest of the season. On this season, the show invited Effie Brown to be part of the industry team that selects the director and hired her to produce the greenlit project. In an industry where all major studio CEOs are exclusively men and 94 percent white, it means something to see a Black women at the helm of a film’s production. Brown is a veteran producer behind films like Dear White People, Real Women Have Curves, and But I’m a Cheerleader. Her role on Project Greenlight gained widespread attention after the release of a viral clip featuring Matt Damon mansplaining diversity to her, which sparked a big conversation about race and gender in Hollywood. It’s difficult not to notice that Brown was just one of two women and the only person of color in the room amongst Hollywood’s cherished white men like Damon, Affleck, and the Farrelly Brothers to decide which of the 10 first-time directors or directing teams should snag the coveted Project Greenlight spot to direct their first full-length film with major studio backing. The group chose Jason Mann, a white, male recent film school grad, as the director.

During the opening credits the beginning of each episode, Affleck reminds viewers that the show “is a documentary about what it really takes to make a movie.” If Project Greenlight‘s goal is to honestly reveal how a film gets made and to really be transparent about the process, how can they condense the selection process to one short episode? There are huge issues around who's behind the scenes in Hollywood, so reducing the entire hiring process to one episode short-changes any chance of in-depth discussion around industry values. The interaction between Brown and Damon illuminated some of these important issues that so often go overlooked. Here's the exchange, as detailed in Essence:

Brown was specifically responding to a film script that featured the only Black character as a prostitute.

“I just would want to urge people to think about, whoever this director is, the way that they are going to treat the character Harmony… her being a prostitute, the only Black person being a hooker who gets hit by her white pimp,” she said before being interrupted by Damon who quickly swoops in, cutting Brown off from finishing her full thought.

Wide-eyed, Brown then looks at Damon with disbelief and responds, “Wow, ok.”

This exchange sets the tone for role Brown has wound up playing during the rest of the season. Depending on your perspective, Brown is framed as two characters: She is either the overly PC, unhelpful producer failing to assist the director in achieving his vision or as the dogged Black woman producer working to make Hollywood more inclusive. I’m of the latter camp. 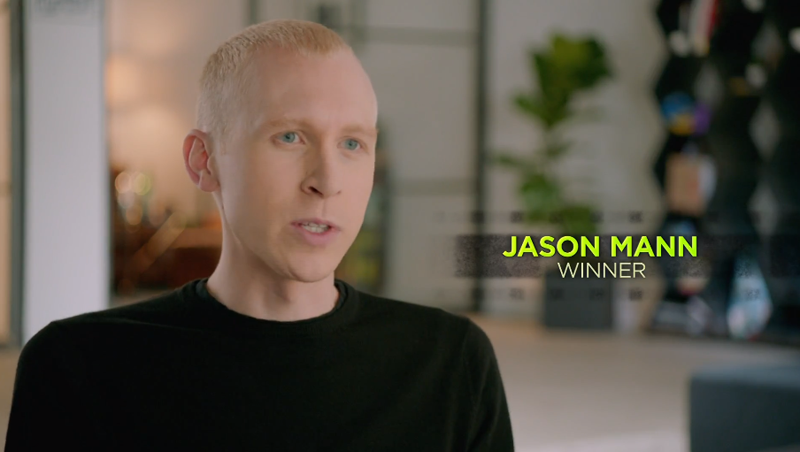 Just in case ya’ll forget, Jason Mann is a “winner.”

Don't forget that Jason Mann is a “winner.”

From the moment his name was announced as the winner at a fancy event, Jason Mann began to make demands. He wanted to overhaul the script that he had been tasked to direct, hire a new writer, and he wanted to shoot on celluloid instead of digital. Affleck and Damon nodded their heads in agreement backstage, “That’s fine.” By the second episode, Affleck and Damon support every decision Mann makes without question, even when Mann is seemingly unreasonable—like continually asking to shoot on film even though Brown has told him repeatedly that the $3 million budget for the independent film cannot cover the added $300,000 cost of shooting on film versus the much-cheaper digital option.

I couldn’t help but feel like I was watching a master class in cis white dude privilege when Affleck says to Mann, “People who are helping you should be saying yes and helping get yesses for you.” Unperturbed, Mann keeps marching on about how the movie must be shot on film for artistic reasons, especially after HBO agreed that he could shoot his own script, Leisure Class (a “broad comedy” about wealthy white people doing wealthy white people things that was apparently better than the possibly racist and misogynistic first comedy script Brown called out). It’s clear that Mann—who has only heard yesses because he was told he should expect them—would not relent about shooting on film. Finally HBO acquiesces and increases their budget to accommodate him—but only after Affleck and Damon offered to give up part of their fee to pay for film (HBO couldn’t have these two rich white guys give up their own money!). Brown is frustrated that Mann circumvented her, and her job responsibilities, by going straight to Batman and Jason Bourne to ask for something. Though he is given the choice between shooting on film or having an invaluable two extra days to film, he chooses the celluloid (meanwhile actual groundbreaking filmmakers are making full-length features on iPhones.)

During pre-production, Brown and Peter Farrelly, Mann’s mentor, get into a spat. As a result, Farrelly quits Project Greenlight. He blames her, saying, “I can see that Effie wants drama, but I do not want to engage in it,” and, “I can’t be myself around her.” This coded language from Farrelly, talking about “drama” and how he can’t “be himself” highlights how women—and women of color in particular—can face enormous professional barriers because white men in power can’t deal with a disagreement and misunderstanding with someone else who isn’t another white man in power. Can’t Peter Farrelly buy a pair of big-boy pants with all of that Dumb and Dumber money? 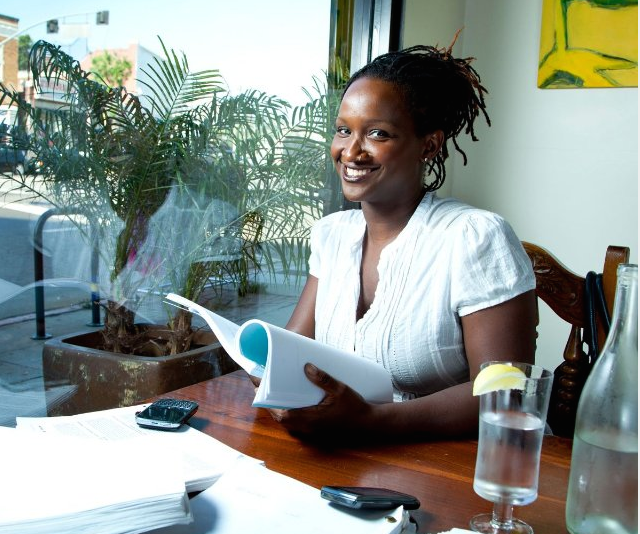 Meanwhile, Brown is working to keep production on track while Mann lollygags around completing the script, choosing a mansion to shoot the film (Mann says none of the nearby mansions in Beverly Hills feel old-money enough to accommodate his old-money story), casting actors, and having his hand in everything from wardrobe to hair and makeup. With just days until they begin to shoot, with millions of dollars on the line and a strict schedule, Brown’s patience begins to wane. As a viewer, my own blood pressure rises with every moment that Mann appears onscreen protecting his “vision.” For marginalized people watching the show, it’s easy to sympathize with Brown, who is simply trying to do her job of sticking on budget and schedule.

Mann’s myopic drive is described as “tenacious,” and “uncompromising”—but these “difficult character” traits are noted as keys to being a great filmmaker. But when Brown exhibits the same characteristics, the show frames her as being obstinate and unsupportive of an auteur’s vision. While some viewers might see Brown as having an attitude, I see exasperation. When they see her being stubborn, I see her doing her job. At one point, after the fall-out with Farrelly, Brown says that she refused to be seen as the “angry Black woman,” because she knew that she had already been painted that way. In that moment, I saw a woman working in an industry that has historically, and continues to, marginalize voices like hers—to the point that the ACLU has called for a federal investigation into gender discrimination in Hollywood.

Midway through the season when the team finally arrives on set, we see why Brown agreed to join the HBO show despite reservations that the show didn’t fit the types of projects that she’s taken on. In stark contrast to the all-white cast who have been hired to be in the film, the film crew Brown hired comprises more people of color than one might see in an entire night of HBO programming on any other day. Brown has stated unequivocally that the only reason she agreed to do this project was to get people of color employed behind the scenes, and for viewers to see people of color working in Hollywood. And she did a dang good job of that.

Inexplicably, as the show follows the ups-and-downs on set, the sixth episode was titled, “Hot Ghetto Mess.” Previous episodes had been named after a line that someone says during the show, but not once was that phrased uttered. However, this episode happened to be the one where Brown asks why the majority of the background extras in a scene of wedding guests were white and she protests when she sees a Black man had been cast as a driver. She doesn't want to see a person of color in a subservient role in a film devoid of any other people of color. Is this the “mess” HBO was referring to when they named this episode? Many viewers wondered the same thing. 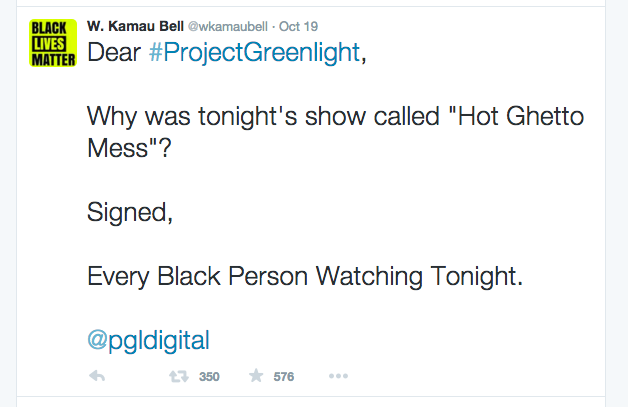 The studio has since released a statement claiming that it was a production error and renamed it to be “The Pivot” (as in, “let’s pivot away from this racist bullshit.”) And even if someone uttered “hot ghetto mess” during the show, of all the thousands of words spoken during each episode, did it really seem appropriate to use it as a title?

It’s probably not a coincidence that in the following episode, the show pivoted it’s focus away from the tension between the producer and director, and instead turned to how Mann is struggling on his last day of the shoot to get all of the footage he needs. Gee, if only he had an extra two days of shooting instead of all those reels of film! Initial reactions to the film’s trailer, and from our behind-the-scene knowledge, has Leisure Class looking like a clichéd, boring comedy. Does a film where there are actual notes given to revise and investigate the motivation for why one white man defecated in another white man’s Bentley sound like it could be good? Maybe it will be masterful, after all, because it was shot on film.

Project Greenlight’s season finale will air this Sunday, November 1st. Leisure Class will premier on Monday, November 2nd on HBO. I’m still deciding on whether to hate-watch it because Effie Brown will be nowhere in sight.