In This Election, More Than Ever, Our Reproductive Rights Are At Stake | Bitch Media

In This Election, More Than Ever, Our Reproductive Rights Are At Stake

Supreme Court Justice Antonin Scalia’s death over the weekend could tip the balance on an important reproductive rights case facing the Supreme Court: Whole Women’s Health v. Hellerstedt. The case is about the legality of the Texas abortion restriction law that will lead to the closure of most of the state’s abortion-providing clinics if it is upheld. Like many other states’ recent abortion restrictions, the Texas law chips away at abortion access in some significant ways. It includes a 20-week abortion ban, requires oversight of women taking abortion-inducing drugs such as RU-486, and requires that doctors who perform abortions have admitting privileges at a nearby hospital.

Justice Scalia more than likely would have voted in favor of maintaining the facilities restrictions at the heart of the case. The Court is due to hear arguments on the case on March 2. If Justice Kennedy sides with the more conservative judges and the vote splits 4-4, it would leave the Texas law in place and put safe, legal abortion at the mercy of each circuit court’s interpretation of what counts as a constitutional restriction. This is just one example of how reproductive freedom is at its most threatened point since Roe v. Wade became law more than forty years ago. With laws against contraception access and coverage, restrictions on abortion-providing facilities that put them out of business, shootings and arsons at clinics, inaccurate and incomplete sex education in high school, and the effort to defund Planned Parenthood, the 2016 election stands as a possible turning point: It could either further this erosion, or reverse the trend. 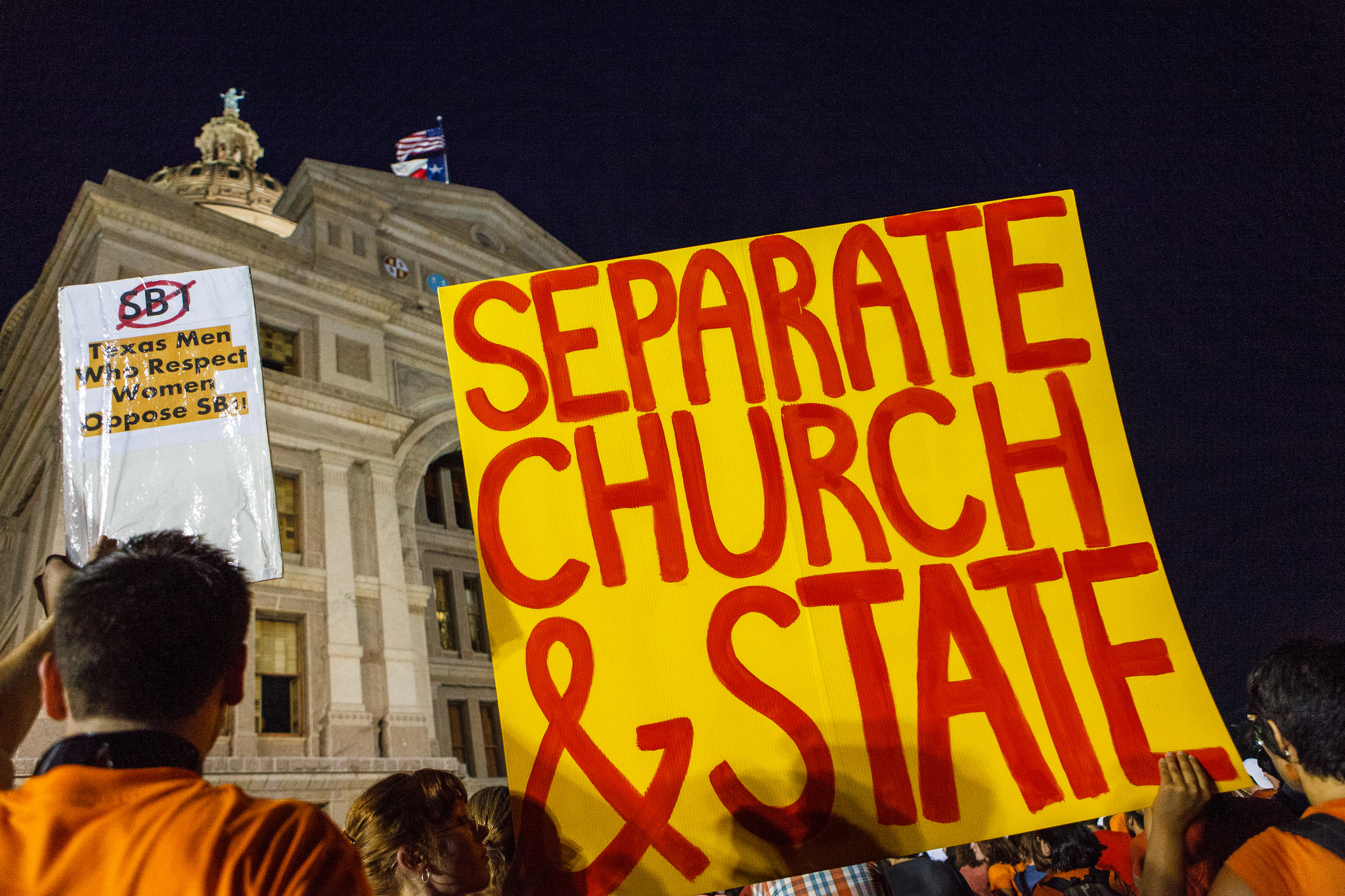 A 2013 protest against the Texas anti-abortion bills that are now facing the Supreme Court. Photo by Beth (CC).

On the heels of one of the most difficult and controversial years Planned Parenthood has ever had, the trend of legislative constraints on abortion is intensifying in the run-up to November’s election. But a quick look back at recent history shows this collusion between Republican officials and anti-abortion forces has been ramping up since the 2010 midterm elections.

Over a period of thirty months from 2013 to 2015 the head of the group Center for Medical Progress, David Daleiden, crafted a series of twelve videos in an attempt to discredit the work of Planned Parenthood. Last summer, Daleiden began releasing one video a week, having prepped several Republican leaders in Congress with pre-release screenings. These pre-screenings were arranged so that the Republican politicians would be ready with their sound bites as soon as the videos debuted. As the videos went viral, Republicans in Congress and in legislatures nationwide were quick to call for costly investigations into Planned Parenthood’s finances.

Though the videos were immediately revealed as hyper-edited fabrications, and Daleiden himself was indicted on federal charges in Texas, the damage was done—several states opened investigations into the Planned Parenthood affiliates in their states, and there were multiple attempts in Congress to defund the organization. Representative Jason Chaffetz (R-UT) opened his own hearing into the practices around fetal tissue donation and president and CEO of Planned Parenthood Cecile Richards responded to his and other lawmakers’ questions for several hours, asserting that her organization only charged nominal fees to cover their costs in sending voluntary donations to medical researchers. 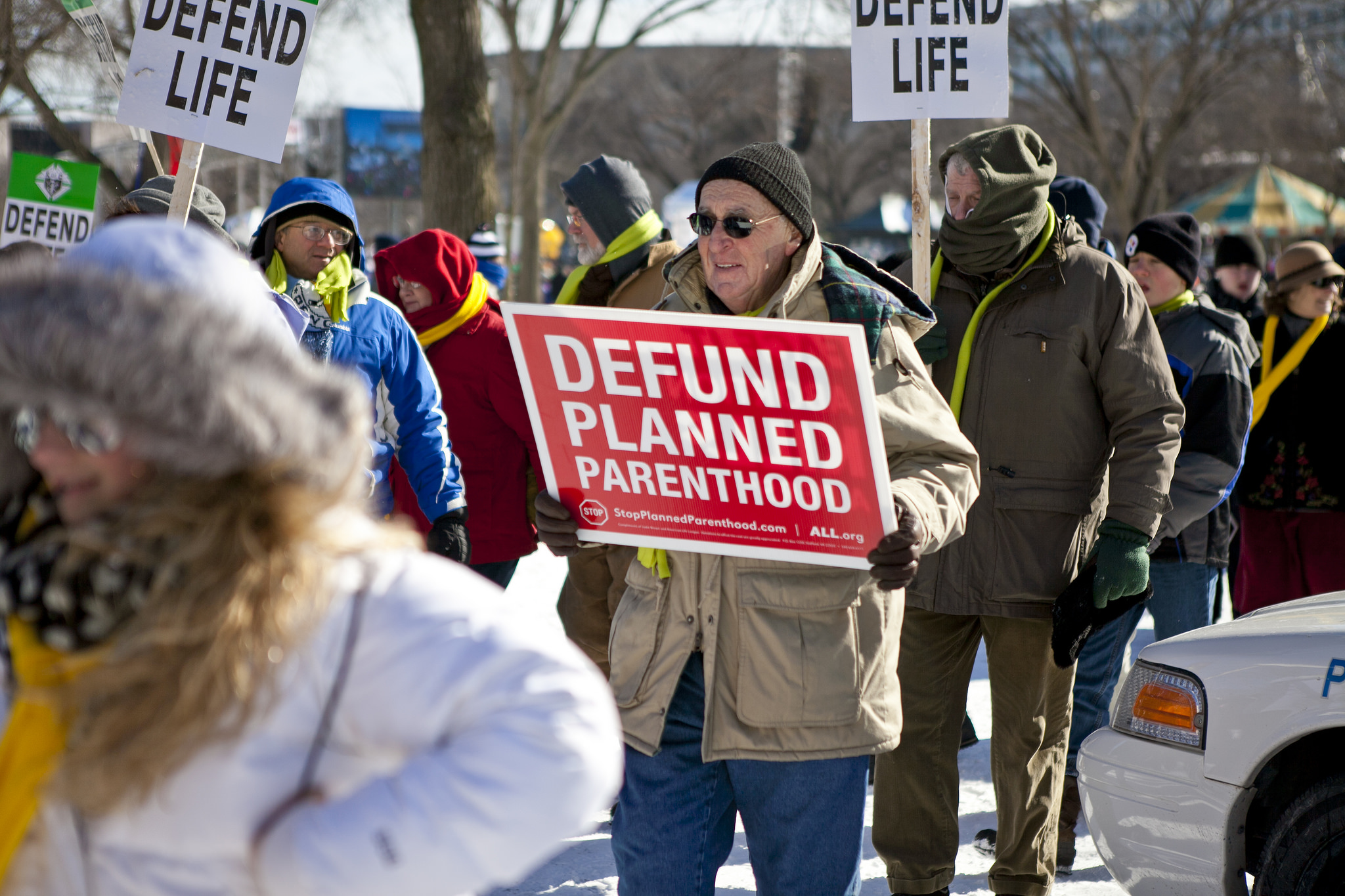 The right-wing effort to pull federal funding from Planned Parenthood picked up steam in 2015—thanks to Republicans who used the series of misleading viral videos as rhetorical foddder. Photo via Creative Commons.

The maelstrom surrounding the videos contributed to legislatures in nine states voting to defund Planned Parenthood in its entirety—Alabama, Arkansas, Kansas, Louisiana, New Hampshire, North Carolina, Texas, Utah, and now Ohio, while Wisconsin is set to become the tenth before the end of February. Ohio Governor John Kasich, currently running for the GOP nomination for President, signed the bill defunding Planned Parenthood into law on Friday. The videos are just the latest effort in right-wing campaigns to roll back abortion rights state by state. Over recent years, legislatures have created hundreds of new rules for practitioners and facilities that abortion providers needed to meet or face closure, and introduced bills requiring longer waiting periods before receiving a termination procedure, harsher notification laws, forcing women to watch videos of fetuses or babies, requiring invasive transvaginal ultrasounds to see their fetus or embryo, and restricting access to the morning after pill even as the Food and Drug Administration lowered the age of access to 16. More than 288 anti-abortion laws have been passed since 2011, in an all-out attack on abortion and related women’s reproductive health. In the process, low-cost or free access to women’s health has been harmed, and now there is evidence showing that the decrease in the number of women’s health clinics has delayed when women terminate their pregnancies, nearly doubling the number of second trimester abortions in Texas alone, certainly not an outcome abortion foes would like to see. A report by the Center for Reproductive Rights and Ibis Reproductive Health stated:

“With few exceptions, states that have passed multiple policies to restrict abortion have passed fewer evidence-based policies to support women’s and children’s well-being, compared to states with fewer restrictions on abortion… The negative relationship between the number of abortion restrictions and the number of policies that support women’s and children’s well-being was stronger than any of the other sub-topics.”

Given these trends and this history, what is in store for reproductive rights during this election season? Kasich isn’t the only GOP candidate for President to enact new restrictions on reproductive rights with the authority of his office; Governor Scott Walker from Wisconsin reduced legal abortion to 20 weeks gestation, and in January Senator Rand Paul introduced a bill to give fetuses constitutional rights. A House bill passed last May set a 20-week gestation maximum on all abortions. Using reproductive rights issues from contraception access and insurance coverage to debating about whether survivors of incest or rape should be allowed to terminate those pregnancies is now a tried-and-true method to get right-wing voters to the polls. About the only thing we haven’t seen yet this primary cycle are the jaw-dropping sound bites about sexual assault and abortion that the 2012 and 2014 elections presented, but don’t fret, the general election cycle later this year will probably bring them to the fore.

As we move deeper into the primary season, we are likely to see congressional candidates touting their anti-choice ideas in debates. Meanwhile, state-level campaigners borrowing heavily from the playbooks of national groups like the Family Research Council and the March for Life, both of which proclaim that contraception causes abortions. We should all be watching state, gubernatorial, and congressional races for language around women’s health and reproduction, where many of these anti-choice policies are hidden, often couched in the lexicon of the left like “empowering women,” where such policies do anything but empower actual women. In the meantime, voters should avail themselves of information on these issues and take questions to every candidate seeking election at the state and federal level. It’s common to say “voting matters,” but when it comes to reproductive rights and women’s health, voting may matter now more than ever.

by Sarah Mirk
Sarah rants about Congress grilling Planned Parenthood. Amy's "white feminism" siren goes off as she explains the importance of intersectionality.