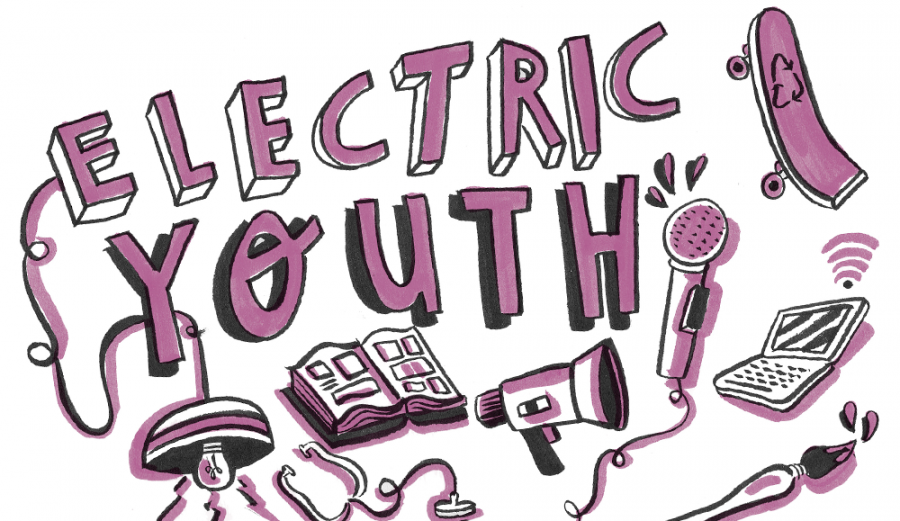 This article appears in our 2016 Fall issue, Kids These Days. Subscribe today and get a limited-edition super-secret feminist notebook!

Self-described writer/revolutionary Carmen Rios is something of a digital wunderkind. If you spend time in the feminist blogosphere, you have either read her or read about her. At the moment (and this list could expand by the time you finish reading), she’s the Straddleverse director, feminism editor, and social media co-director at Autostraddle; the digital editor at Ms. Magazine online; She Wins, We Win digital coordinator at the Feminist Majority Foundation; and a contributing writer at Everyday Feminism. She’s written for PolicyMic, Feministing, and Bitch. Jezebel loves her stuff. Rios has cool glasses, a big smile, and fantastic hair (how many of us can say someone made a Facebook page for our hair in college?), but her trademark is keeping it real. Whether she’s writing about queer politics, racial and gender justice, poverty, or rape culture, her readers can count on a lot of beautiful trouble, a bit of righteous profanity, and a rich dose of fearless, bold, and passionate analysis. —Lyn Mikel Brown

After years of feeling confused, confined, and disoriented by the limitations of gender norms while suffering through bullying and depression, 25-year-old Tyler Ford realized it wasn’t them—it was the gender binary. The New York City–based trans, queer activist has since embarked on extensive writing, speaking, and media activities to further lgbtqa+ rights and push for the diversification of the depiction of the trans and queer experience in mainstream media, which has earned them recognition from the likes of Dazed, MTV, and Miley Cyrus’s Happy Hippie Foundation.

After initially coming out as a trans man, Ford realized that while their gender was not the one they were assigned at birth, they did not feel comfortable anywhere at all on the gender binary, ultimately identifying as a nonbinary trans person. Coming to understand that much of their dysphoria could have been alleviated far earlier with access to knowledge of the existence of identities beyond the binary and better representation of individuals like themselves, Ford strove to increase visibility of the queer trans experience through their writing, which can be seen in publications such as the Guardian, Rookie, and V Magazine. By increasing the availability of information about gender-nonconforming individuals and the diversity of the trans experience to the public at large, Ford hopes to provide much-needed support to those seeking guidance, especially young people.

Contrary to popular belief, neither social media nor millennials are vapid and narcissistic; rather, individuals like Ford prove that younger generations can and most certainly do harness the available technology to change the world around them in a positive, compassionate way.
—Victoria Chiu

Xiuhtezcatl Tonatiuh, an Indigenous environmentalist, is suing the U.S. government for failing to stop climate change. In March, Tonatiuh and 20 other youth activists filed a case arguing that extensive and underregulated use of fossil fuels has caused irreparable damage to the future global climate—their future. “My generation is going to be inheriting the crisis we see all around us today. We are standing up not only for the environment and the Earth and the atmosphere, but for the rights we have to live in a healthy, just, and sustainable world,” Tonatiuh, who was raised in the Aztec tradition in Boulder, Colorado, told CNN.

The lawsuit, which is part of a years-long campaign waged by the environmental nonprofit Our Children’s Trust, faces opposition from dismissive U.S. Department of Justice attorneys, who contend that there “simply is no constitutional right to a pollution-free environment.” As the lawsuit winds its way through court, the youth are fighting an intergenerational cause with global effects, calling out the active harm caused by economic greed and political indifference. —Alexxander Dovelin

Angy Rivera was a 19-year-old undocumented Colombian American when she started an advice column for other undocumented youth, “Ask Angy.” Now 25, she does crucial work building community among undocumented youth, advocating for their rights, and helping them navigate an oppressive environment with open communication. In 2013, she received a legal U.S. visa, but that didn’t erase years of violence and discrimination. As she wrote in a blog post for the New York State Youth Leadership Council: “It was never about papers, citizenship, a social [security number,] or a state id. It was about the ways in which we treat immigrants in this country, and around the world. About the systems we have in place that drive people to migrate… about who gets to work, live, and love here.” Rivera’s community-building work is essential when many undocumented teens’ lives depend on silence and invisibility, stifling their ability to advocate for their human rights and to heal from personal hardships such as homelessness and sexual abuse. Most recently, Rivera’s life and activism were the subject of the documentary No Le Digas a Nadie (Don’t Tell Anyone), which won a 2015 Peabody award. —A. D.

15-year-old New Jersey native Emily DiPrimio funded her first film, Carver, on Kickstarter and began production when she was just 13. In 2015, the young horror director landed a professional gig writing and directing the web series Violet for Crypt TV. DiPrimio describes the series as a “supernatural journey of vengeance.” She’s garnered plenty of critical praise, but DiPrimio does take umbrage with those who downplay her work and insinuate that her father is the one calling the shots behind the camera. “Horror has always been a genre dominated by men, and a lot of the negativity I’ve received has been directed more toward my gender than my age,” DiPrimio notes. But neither critics nor longstanding sexism in the film industry scares DiPrimio—pushback from her detractors only confirms that she’s on the right path. She says, “Violet is relentless and doesn’t stop until the job is complete. I’d like to think I share that quality with her.”—Kim kelly

Iowa teen Sruthi Palaniappan’s extracurricular activities include violin, piano, show choir, and propelling Hillary Clinton to the Oval Office. Palaniappan served as a precinct captain during the presidential primaries and was one of the youngest national delegates elected to rep for Clinton at the Democratic National Convention this past July. She’s no stranger to D.C.—as a national student ambassador for the Save the Children Action Network, she addressed members of Congress, encouraging them to make early childhood education a legislative priority. She believes “every child, regardless of their background, deserves to live a happy and healthy life and to discover their full potential.” Palaniappan also does advocacy work close to home, serving as the governor of Iowa Girls State and education chair of the Iowa Youth Advisory Council. She is headed to Harvard University in the fall.  —Nadya Okamoto.

When Jonathan Kalin was a Colby College freshman, a friend told him she had been sexually assaulted. “The statistics came to life,” he said; things became personal. A basketball player, Kalin joined an on-campus club called Male Athletes Against Violence and within a year was both captain of his team and MAAV president. The inspiration for Party With Consent came from a neon-emblazoned “Party With Sluts” tank top he saw in a “Shit Frat Guys Say” video. Kalin copied the font and colors, turned the message on its head, and began a campus-wide conversation about enthusiastic consent and positive sexual relationships. PWC has taken off, with help from articles in the Atlantic, the New York Times, and TIME magazine. Now 24, with tank tops and red plastic PWC cups in hand, Kalin crisscrosses the country challenging male athletes and frat brothers to reject hypermasculinity, sexual objectification, and homophobia and become, instead, advocates for the prevention of gender-based violence and sexual assault. —L. M. B.

Because she shares national tv space with heavies like Jon Stewart and Stephen Colbert, it’s easy to forget that comedian Jessica Williams is just 27 years old. But when she joined the team of The Daily Show in 2012, she was the show’s youngest-ever correspondent and its first Black female one. Over the years, she aimed her incisive wit at the country’s most serious problems, putting issues of racial and gender discrimination onto millions of Americans’ radars. (In one memorable segment, she reported on police brutality against Black teens at a pool party in McKinney, Texas, by donning a bikini over full body armor.) She approaches these tricky topics with a style that both welcomes in people new to social justice—taking the time to lay out basics on how systemic discrimination plays out in everyday life—and hits home for people who deal with inequality every day. Now, Williams has departed The Daily Show for new projects, including the WNYC comedy podcast Two Dope Queens (which she cohosts with Phoebe Robinson) and a Comedy Central pilot. In a media landscape where most talking heads on tv are old white men, hearing Williams’s perspective on politics and pop culture is a breath of fresh air. Hopefully we’ll be seeing her more than ever. —Sarah Mirk