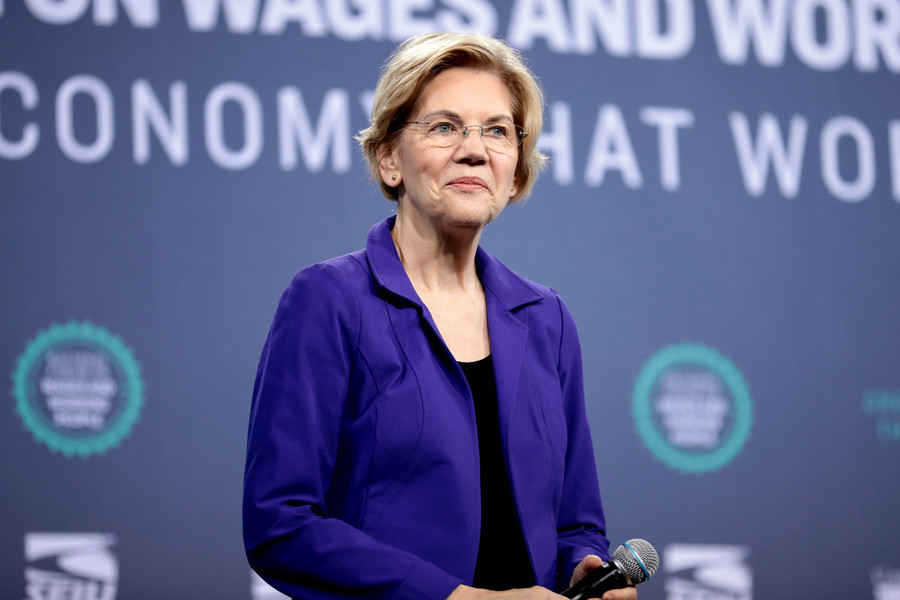 U.S. Senator Elizabeth Warren speaking with attendees at the 2019 National Forum on Wages and Working People hosted by the Center for the American Progress Action Fund and the SEIU at the Enclave in Las Vegas, Nevada (Photo credit: Gage Skidmore/Flickr/Creative Commons)

Historically, the disability community has not been considered a key demographic for politicians to court in the way that women, voters of color, and faith-based communities often are. Data from a recent Rutgers University report, however, indicates that this may be changing: Voter turnout among people with disabilities increased by 8.5 percentage points in 2018, with 14.3 million disabled people voting in the 2018 election. Such a surge makes disabled voters one of the demographic groups to win, surpassing the 11.7 million Latinos who cast ballots and coming close to the 15.2 Black voters who voted in the midterm elections. It should come as no surprise, then, that Democrats are likely to make disability justice a core issue in 2020. Nearly every major candidate has released some sort of disability policy plan, albeit ones with varying levels of robustness and quality. (The Sanders campaign has said that it plans to release a plan in the future.) At the front of the pack, however, is Senator Elizabeth Warren, whose plan presents a truly comprehensive approach to disability justice.

Warren’s focus on the needs and interests of disabled voters stands out in particular when contrasted with Donald Trump’s disregard—and outright disrespect—of them. Since taking office in 2016, Trump has quietly but persistently waged an all-out war on disability rights: cutting funding for Medicaid and Social Security, undermining the Americans with Disability Act (ADA), repeatedly attacking the Affordable Care Act, and rolling back Obama-era guidelines meant to protect disabled people from discrimination at school and in the workplace. Though the president has repeatedly insisted that he “will always protect your Pre-Existing Conditions!”, that could not be further from the truth: The president, along with Republicans in Congress, made weakening such protections their top legislative priority following the 2016 election.

Under Trump’s direction, the Department of Justice is currently arguing in court that those protections be overturned altogether. And just last week, the Trump administration rolled out a plan to transition the funding of state Medicaid programs to block grants—a move that experts say will result in drastic cuts to eligibility and coverage. Given that 61 million Americans currently live with a disability, the president either drastically underestimates the impact his actions will have on his 2020 electoral chances, or—much more likely—simply doesn’t care, prioritizing his belief that disabled people are lesser humans over even his own self-serving desire to win a second term.  In contrast, Warren’s plan is incredibly broad in scope, encompassing issues that impact and intersect with the disability community, among them economic security, healthcare, education, employment, housing, incarceration, police brutality, and environmental justice. The plan’s breadth is necessary, because, as Warren noted during a Twitter town hall on January 7, “All policy issues are disability policy issues.” Notably, the plan was developed in partnership with a large group of disabled activists—a process Warren told the New York Times was a priority for her.

The impact of Warren’s plan, if implemented, cannot be overstated. In the past, politicians have often viewed disability issues as ones that impact caregivers, or as simply one aspect of healthcare. More moderate candidates like Amy Klobuchar and Joe Biden have seemed happy to continue this framing. Klobuchar’s disability plan, for example, is largely devoid of the narratives (and input) of disabled people: It focuses on proposals such as tax credits for caregivers, affirms her support of legislation allowing for the surveillance of people with cognitive and developmental disabilities, and increasing the use of inpatient treatment rather than the community-based care that disability advocates have been advocating for decades. As one disability advocate said, “I’m not sure who the campaign consulted with on this plan, but it sure as hell wasn’t self-advocates.”

Biden, meanwhile, has yet to either release a disability plan or indicate that he plans to do so (though he did pet a disabled man last week, so I guess there’s that). Andrew Yang’s most fervent supporters (the “Yang gang,”as they call themselves) have asserted, repeatedly and aggressively, that Yang’s signature Universal Basic Income (UBI) proposal is just the plan to solve disabled people’s problems. But Yang’s own website, which is largely focused on his Freedom Dividend plan, contains serious factual errors about existing disability benefits and betrays the candidate’s serious lack of understanding of the topic. Disability advocates first pointed out these errors—which are serious and foundational—to Yang’s campaign in September of 2019, but as this writing the campaign has neither addressed nor fixed them.

Elizabeth Warren’s plan, on the other hand, makes it clear that she sees disabled people as just that: fully rounded people who are not defined by their disabilities and who deserve to live fully rounded lives—including meaningful integration into their communities. That the plan was developed with the help of prominent disability advocates such as Rebecca Cokely and Matthew Cortland is obvious from the level of detail and inclusion of disability rights issues that might not even occur to most able-bodied people, such as the separation of disabled parents and their children and the barriers many on Supplemental Security Income (SSI) and Social Security Disability Insurance (SSDI) face when they marry. “For decades, disabled Americans have worked towards the day when we aren’t forced to choose between legal protections for our families and losing access to the programs we need to stay alive,” Cortland said.

One of the first issues the plan addresses is economic security. The unemployment rate among disabled people is more than twice the rate of those without disabilities, and disabled people are more than twice as likely to live in poverty. When employed, disabled people are more likely to have part-time and hourly jobs, which often means little to no benefits and restrictive or non-existent paid-leave policies. And archaic sub-minimum wage policies, which equate to little more than government-sanctioned pay discrimination, allow employers to pay disabled workers as little as 4 cents per hour. Under Senator Warren’s plan, subminimum wage policies would be eliminated and a $15 minimum wage would be established.

The plan would also improve the economic security of disabled people who are unable to work by reforming SSDI and SSI. For decades, disabled Americans receiving SSDI and SSI have lived far below the poverty line, thanks to unacceptably low benefit rates, long waiting periods, and a nonsensical return-to-work benefit cliff, which prevents recipients from pursuing any amount of employment without losing their benefits. Under the Warren plan, SSI and SSDI payments would be raised to match the federal poverty line and harmful, arbitrary waiting periods would be eliminated. Warren’s plan would also address issues disabled people face outside of the workforce, beginning with educational reform. The high-school graduation rate for students with disabilities is 18 points lower than their non-disabled peers, with racial disparities making those numbers even worse: During the 2016-2017 school year, only 70 percent of Latinx students with disabilities and 64 percent of Black students with disabilities received a high-school diploma.

These numbers reflect the ableist disparity in opportunities as well as the bias of educators and administrators (students with disabilities are disproportionately punished, for one), rather than a reflection of their abilities. Many disabled students find that even their school buildings are obstacles to their success: In New York City, only 17 percent of elementary schools are fully ADA compliant. Warren’s plan would invest $50 billion in accessible school infrastructure and commit an additional $20 billion per year to the Individuals with Disabilities Education Act (IDEA), which insures educational equality for disabled students. Other issues addressed by Warren’s plan include housing (3 million new affordable housing units, with a portion prioritized to disabled people), healthcare (including Warren’s Medicare for All transition plan), and civil-liberty issues such as the disproportionate rate at which disabled people are victims of police brutality and the criminalization of homelessness, poverty and mental health.

There was only a single area in which I found the plan lacking: existing medical debt. Warren’s existing plan does not address the existing medical debt that currently plagues millions of Americans to the tune of tens of thousands of dollars—but upon reaching out to the campaign, I was told they “are exploring what’s possible for medical debt cancellation.” Given a current administration that regularly combines ableism with xenophobia and bigotry, Warren’s plan offers hope to a community that encompasses one in four Americans. Her plan represents a serious commitment to disabled rights and an equally serious play for disabled votes—a fact in which disabled people can find reason to rejoice.

by Alice Wong
Senator Duckworth unapologetically brings her full self into every space she navigates as a parent, veteran, politician, and disabled woman of color.
by Kendall Brown
View profile »