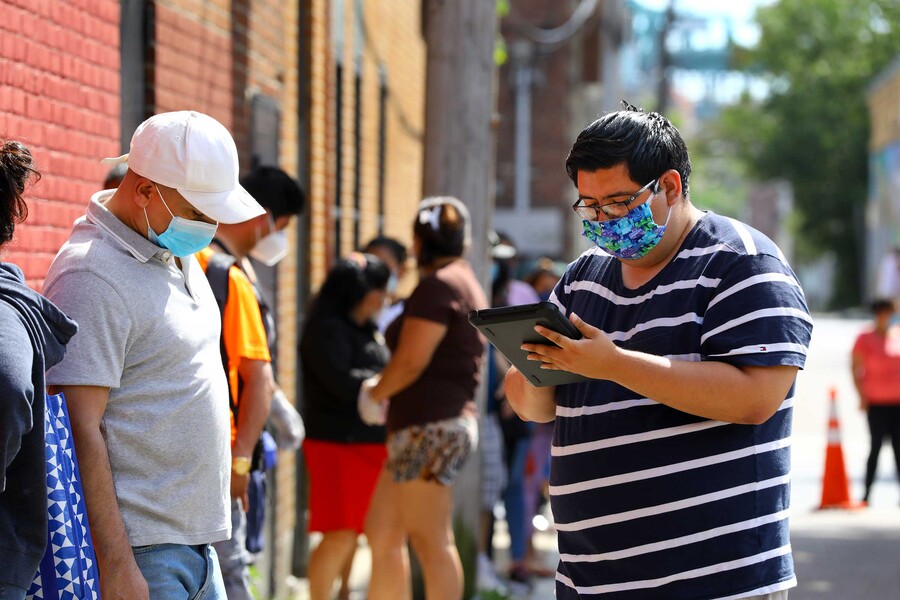 Census 2020 field organizer Jeffrey Tellez, right, interviews a resident in the food pantry line at the Chelsea Collaborative in Chelsea, Massachusetts, to attempt to get an accurate count on June 4, 2020. (Photo credit: Pat Greenhouse/The Boston Globe via Getty Images)

Earlier this month, the Trump administration announced that it would end census counting efforts on September 30, 2020, four weeks earlier than expected. This last-minute change will have enduring effects, undermining efforts to guarantee accurate political representation and federal funding for the next decade. With an estimated 60 million households still uncounted and the coronavirus pandemic affecting census workers’ ability to reach hard-to-count communities, those most impacted by this directive will be communities of color and undocumented folks, who the Trump administration has strategized to systematically erase time and time again.

This announcement comes a few short weeks after Trump issued a memorandum directing the Census Bureau to gather data on the estimated numbers of undocumented migrants by state and to exclude those populations from the reapportionment of House seats (the American Civil Liberties Union is challenging this mandate in court). It also follows a years-long legal battle to include a citizenship question on the census form, a move that was blocked by the Supreme Court last year. Notably, the Constitution states that the census is designed to count all people residing in the United States—regardless of citizenship status. Even still, the administration continues to threaten undocumented folks’ access to the census, and abruptly ending counting efforts is a last-ditch attempt to prevent these communities from receiving services; namely, funding for education, housing assistance, and jobs programs.

Obviously, the directive is also a power grab and a desperate attempt to maintain white political power. Indeed, if undocumented communities are not counted, as the July 2020 Trump memorandum mandates, the Pew Research Center predicts “California, Florida, and Texas would each end up with one less congressional seat…based on population change alone.” The decennial census is designed to ensure fair political representation, and the fact of the matter is that Latinx youth are one of the nation’s fastest-growing demographics. Indeed, Latinx voter turnout grew from 6.8 million in 2014 to 11.7 million in 2018—the largest recorded increase from one midterm election to another. And, although not all (or even most) undocumented migrants are Latinx, Trump has a long history of invoking a racialized “Latino threat” to accrue political power.

Undocumented migrants and their children—many of whom are U.S. citizens and eligible voters—threaten to destabilize the reapportioning of political power. In the United States, the condition of working and living without legal authorization is colloquially referred to as being undocumented, living in the shadows, sin papeles. Undocumented migrants lack a green card, naturalization certificate, social security number. Yet, the government keeps track of us, regardless. Our movements are marked: traffic tickets for driving without a license, surveillance footage, pay stubs, and utility bills. Undocumented communities also keep an archive of documents—images, letters, souvenirs. Aurora Chang, an activist and higher education professor at Loyola University Chicago, writes about the urge to become hyperdocumented in response to a lack of legal status. For instance, in academic settings, she collected straight-A report cards and certificates to secure belonging. For the many years we were undocumented, my father was similarly hyperdocumented and vigilantly stored a form letter from Congresswoman Virginia Foxx in the glove box of his 1992 Honda Accord. If he were pulled over by the police, he assumed that the letter would be proof that someone in the government had validated his presence, confirming that he did have some sort of status in the United States.

Undocumented people are alchemists, inventing our own papeles despite rhetoric and policy that invisibilizes us. When we’re not officially counted, migrants devise alternative ways to count ourselves. A public statement by four former Census Bureau directors has urged the administration to extend the deadline to collect information to April 2021, warning that the accelerated timeline will lead to the underrepresentation of hard-to-count communities, including people whose primary language may not be English, who lack internet access or a permanent address, or who live in rural areas. Many undocumented people face all of these constraints, in addition to being hesitant to complete the census due to fear of surveillance and deportation. A 2020 survey conducted by the Census Bureau confirms that undocumented folks fear that the information they offer could be shared with enforcement agencies.

Survey participants emphasized that a potential citizenship question and an “inhospitable political environment” disincentivized them from completing the census. Some expressed concerns that the citizenship question would be used to calculate (and eliminate) the amount of federal funding spent on providing social services to undocumented migrants. Cutting census-counting efforts short and overworking data collectors limits outreach that could dispel these myths and offer counsel to undocumented people. The directive to halt counting efforts is undeniably about undercounting undocumented communities and attempting to undercut their political power. It continues a legacy of erasing and invisibilizing undocumented communities, of denying migrants papeles. This happens through deportation, for instance, when people are kidnapped by enforcement agents and erased from their workplaces and communities.

The Trump administration’s attempt to systemically erase migrants is a failed project. We represent ourselves. We always have.

Erasure happens through immigrant detention and imprisonment; as abolitionist elder Angela Davis notes, “prisons… perform a feat of magic” that eliminates surplus populations and makes people unseen. Limiting access to the census and instilling fear in migrant communities seeks to accomplish a similar goal: working to eliminate people from state legislative maps, eliminating people from tallies that determine funding, and pretending that undocumented people don’t exist and don’t contribute to this country. For many, the census is a bureaucratic inconvenience or a simple five-minute questionnaire that can be completed over a meal or between meetings. For undocumented people, it can be a crisis and a cause for concern: Will this information be shared with ICE? Is there a citizenship question? Will this be the reason I am deported? Putting an abrupt end to counting efforts undermines efforts to reach out to these vulnerable communities and becomes another way for the Trump administration to attempt to disempower undocumented people.

I could end there, but Indigenous studies scholar Eve Tuck taught me to suspend “damage-centered” research, or in other words, narratives that exclusively document trauma and suffering in attempts to hold those in power accountable. Power is never totalizing. And undocumented people routinely develop creative strategies and fugitive maneuvers to evade capture. Now a minister to a largely undocumented community, my father is leading local efforts to encourage hard-to-count communities to complete the census. People can drive to his church and access free wi-fi to submit their information. They can receive pro bono legal advice. They can speak to someone in Spanish. And, although the census determines political representation and federal funding, these government databases have never fully accounted for our presence anyways. Our communities exceed these forms and surveys. As a child, I lacked papers, but I never lacked documentation. My family—biological and chosen—collected photographs, wrote letters, annotated books, made art. The Trump administration’s attempt to systemically erase migrants is a failed project. We represent ourselves. We always have.

Read this Next: Fierce As Fuck