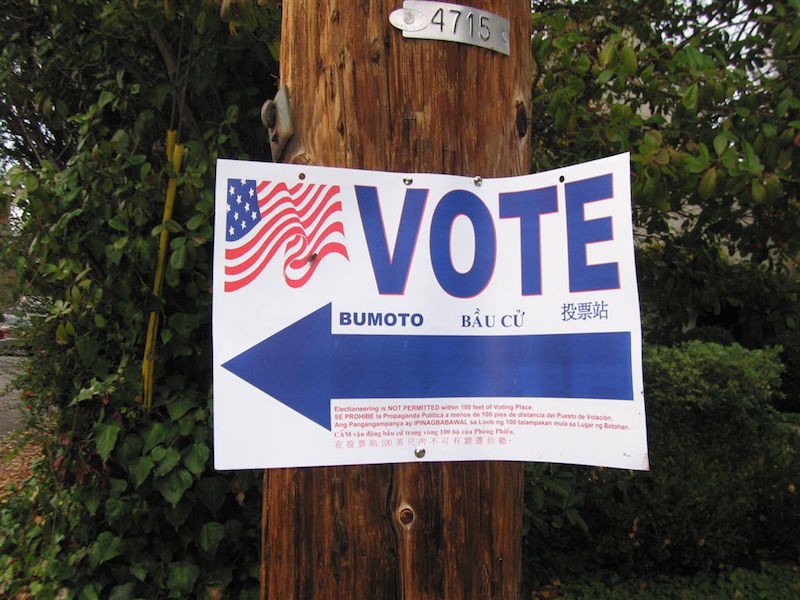 Imagine you get to your polling place on election day. The poll worker checks your name and hands you a ballot and… you can’t read it. It’s not in your language.

That’s the situation that a lot of Americans find themselves in when their native language is something other than English. During this election year, a new digital tool called VoterVox aims to tackle language barriers that prevents people from voting—a problem that affects non-English speaking groups all over the country but is particularly present in Asian American communities.

“Basically in almost every poll in every jurisdiction, Asian Americans have a lower voter turnout rate than any other racial group,” says Cayden Mak, the Chief Technology Officer of 18 Million Rising, a group that promotes civic engagement among the 18 million Asian Americans and Pacific Islanders in the United States. According to 18 Million Rising, only 55 percent of Asian Americans are registered to vote—and a big hurdle to increasing that number is language. According to the census, the largest Asian and Pacific Island language groups in the United States are Chinese, Korean, Tagalog, Vietnamese and Hindi. But a full 1.2 million Asian Americans didn’t even see their native language listed on the census. About one-third of all Asian Americans are limited-English proficient, meaning that they have some difficulty communicating in English. Getting ballots translated from English into their native languages has proven difficult at best. 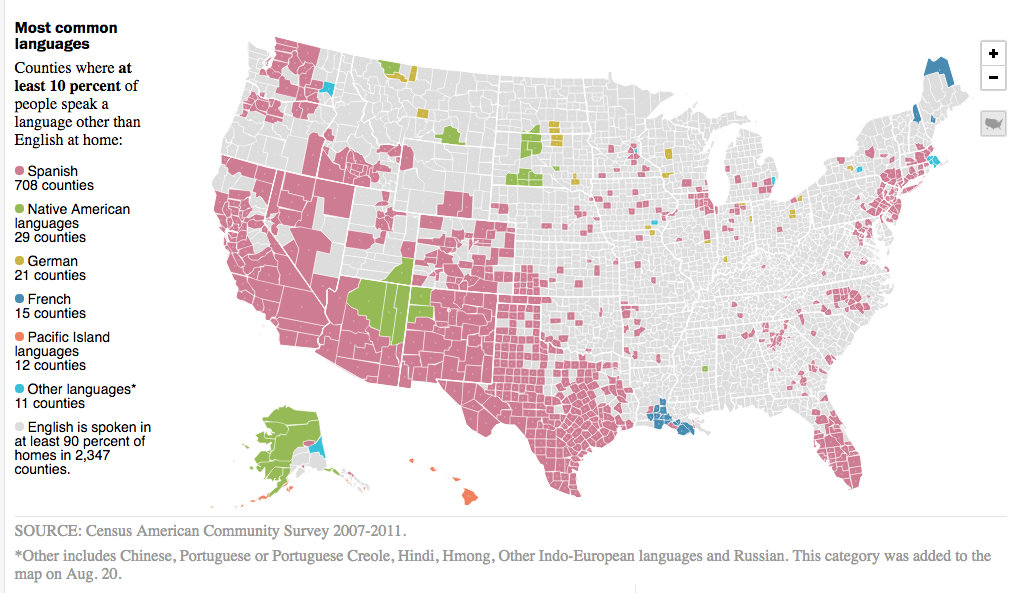 A map made by the Washington Post showing the diversity of languages spoken around the United States.

In 1975, an amendment to the Voting Rights Act guarantees the right to have bilingual election materials. But there’s a big loophole in the law: Local governments only have to translate ballots if the people who speak that language make up five percent of the jurisdiction or account for at least 10,000 people. So if 900 Urdu speakers live in a city of 20,000 people, the government doesn’t have to translate their ballots—and probably won’t, because of the expense involved in translation. In some cities, nonprofits step in and translate ballots when local governments won’t, but that kind of collaboration isn’t consistent across the country.

“In a lot of places, people are kind of SOL,” says Mak. There are other problems at work here, too. “Virtually every election we hear about Asian Americans, whether they’re East Asian or South Asian, being challenged about their names, about their citizenships, being asked for IDs in non-voter ID states, being asked to spell their names out loud and prove that they speak English,” says Mak. “Literacy test has been illegal for voting since the ’60s. But these are common things that happen to especially elders in our community who are less likely to speak English and are a little more vulnerable.” If bilingual ballots aren’t provided, voters have the right to bring a translator with them to the polls—but many people don’t know about that policy, including poll workers. In 2014, the group Advancing Justice found that Vietnamese-speaking voters in Louisiana were not allowed to have a translator with them at the polls in the 2012 election because poll workers weren’t aware of the law. Just this week in Texas, voting rights advocates won a crucial case in their fight against a law that kept a woman of Indian descent from having her son serve as an interpreter at the polls in 2014.

18 Million Rising started thinking about creative ways to solve this language-barrier problem. They realized that across the United States, there are already lots and lots of people who are working as translators in Asian American communities: English-speaking kids. Parents often look to their English-speaking or bilingual kids to help them out translating legal documents, movies, and school permission slips. Mak says 18 Millions Rising wanted to harness those youths’ translation skills, so they built VoterVox.

Here’s how it works: If you’re a voter looking for a translated ballot, VoterVox has a little sign-up form you can fill out with your name, your language, and where you live. They help you get a mail-in ballot, walking you through whatever necessary paperwork your state has, and match you with a volunteer who speaks your language. You and the volunteer meet up with your mail-in-ballot and talk through the language and any complicated jargon, so you can make an informed decision. 18 Million Rising also provides volunteers with nonpartisan voters’ pamphlets and other educational materials. The program is launching this September in California and Minnesota—kind of a beta test before they aim to take it nationwide.

“VoterVox is  about more than elections. It’s about getting more people to vote, but it’s also about building community power and doing intergenerational organizing using technology,” says Mak. “A lot of times, volunteering in this way is the first time that young people feel really appreciated for having this special skill. It’s like they never realized that being bilingual is actually this special super power that can empower their communities.”

If it’s successful, VoterVox could inspire similar matching services for other language groups. While 18 Million Rising focuses on Asian Americans and Pacific Islanders, English-only ballots are a persistent issue that community organizers have been working to address in various communities. In 2014, members of the Navajo Nation filed a lawsuit against their local county, worried that a switch to voting only by mail would disenfranchise non-English speaking members of their community. English-only ballots are an especially big problem in the South, where there are numerous emerging non-English-speaking communities that are not yet big enough to trigger the Voting Rights Act requirement to translate ballots. In Georgia earlier this year, the local government of Gwinnett County rejected a request to translate ballots into Spanish—a move that’s mentioned in lawsuit civil rights groups filed this month that argues the county is intentionally diluting the power of Black and Latino voters. “Gwinnett County government does not care about Latinos and has done very little about reaching out to the Latino community,” Jerry Gonzalez, executive director of the state’s association of Latino elected officials, told the LA Times. “Until it’s an inclusive government, it’s a fraudulent government.”