What “Euphoria” Says about the Realities of Caregiving | Bitch Media

The Most Realistic Part of “Euphoria”? Its Depiction of Caregiving. 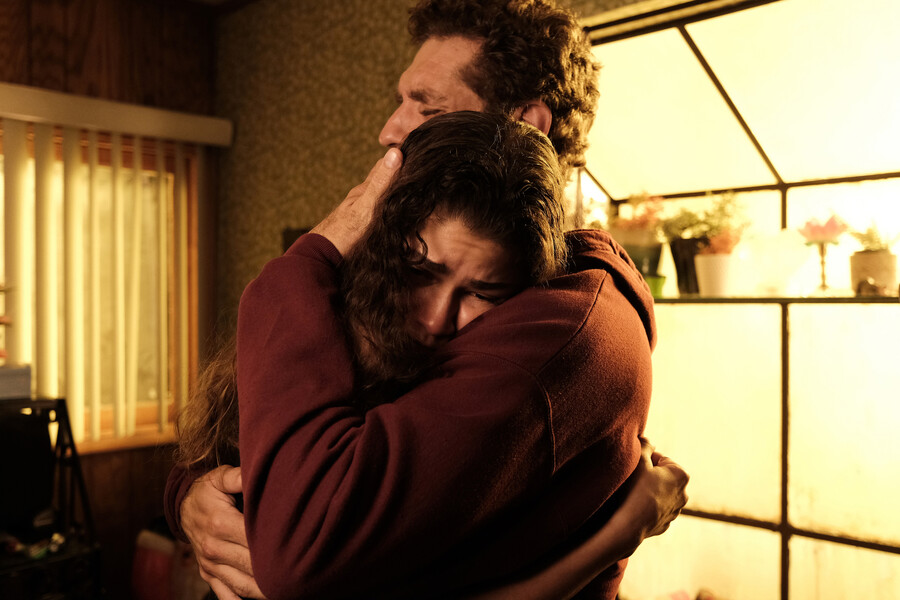 Content warning: This article discusses substance use and addiction.

The show’s realism, or lack thereof, has been a hot topic of debate since it premiered in 2019 (is it realistic? Is it not? Should it be?). But, unlike the series’s more graphic depictions of violence, substance use, and sex, Euphoria’s portrayal of kids in caregiving positions runs quietly in the background. In Season 1, we learn that Rue Bennett’s (Zendaya) father (Bruce Wexler) was cared for at home before passing away from cancer. We also see glimpses of Fezco (Angus Cloud) caring for his grandmother and formal guardian (Brynda Mattox). It’s never stated plainly, but it’s impossible to deny that Rue and Fez’s stories—as well as those of their siblings Gia Bennett (Storm Reid) and Ash (Javon ‘Wanna’ Walton)—are impacted by childhoods spent trying, usually without success, to alleviate the suffering of someone they once believed could protect them from anything.

When young people shoulder caretaking responsibilities for their own caretakers, and watch them face the apathy and violence of a broken healthcare system, the experience is traumatic. For those who grew up in similar circumstances, the effects of that trauma are reflected, if imperfectly, in Euphoria. For example, Elly Belle is an abolitionist writer and Bitch contributor who took on ever-increasing caretaking responsibilities for their grandfather and father throughout childhood. While it doesn’t always seem deliberate, Belle tells Bitch that Euphoria does capture “how interruptive trauma and grief are to young people’s lives.” Rue, says Belle, has seen “how fraught illness and the end of life can be” through her father and has reacted with a fatalistic self-destruction through substance use. “That rang true to me as someone who’s been there…I definitely see a little bit of myself in Rue, as well as other characters who are coping with such adult problems and being expected to handle them as adults instead of kids.”

“Caregiving was always a part of my life in some capacity,” says Madysen Luebke, a writer whose mother, Debi, had multiple sclerosis. “It was so pervasive that I kind of can’t tell what’s caregiving and what’s not.” According to Luebke, it was scary and overwhelming to have to decide what level of emergency constituted a hospital visit. Sometimes she would notice her mom had fallen asleep during a movie and momentarily think the worst. At the same time, she’s grateful that her family had the resources for her mom to live at home. “There’s a part of me that’s really glad that, even for the bad things, I was there.”

“For many of my friends who come from different cultures [than mine],” says Belle, “it’s basically the expectation and understanding that you just do care for people at home throughout their lives, including their old ages. But the underlying truth […] no matter what culture or background we come from is that the average person, especially children and young people, are not equipped with the emotional and mental maturity, resources, understanding, and medical knowledge” that caretaking responsibilities demand.

The emotional and material consequences of these situations are stark for both disabled and seriously ill parents and their children. In adults, feeling overwhelmed by caregiving responsibilities without support can lead to increased risk of anxiety, depression, stress, isolation, and loneliness. Adolescents, whose psyches are still developing, are even more vulnerable. Additionally, if we know for a fact that children are traumatized by watching violence perpetrated against their guardians, it stands to reason that watching their guardians endure systemic violence from an ableist healthcare system could harm them too.

Witnessing violence—both physical and systemic—in childhood increases the likelihood of mental illness and substance-use disorders. In Euphoria, Rue’s extant anxiety is naturally magnified by her father’s situation. And though Fez’s state of mind can be notoriously hard to read, it’s safe to say he’s pretty stressed out. Since his primary caretaker is unable to work, financial pressures are the driving factor for his continued dedication to maintaining the drug business he inherited from his grandmother. 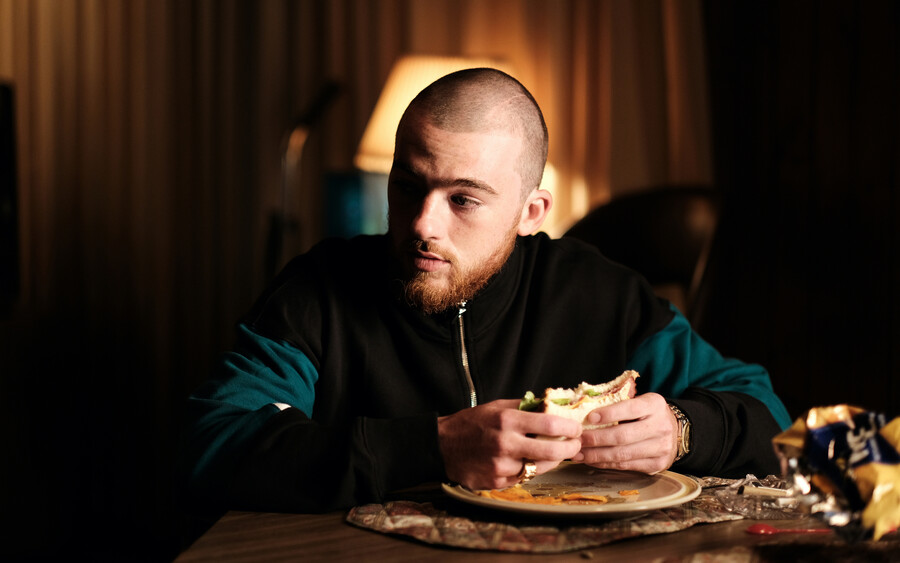 Drugs are, obviously, a major presence in Euphoria. They’re also usually present in the homes of people managing illness. The show doesn’t focus much on the practical realities of either Rue’s or Fez’s situations, but the moments we see are impactful. In Season 1, Fez gives his grandmother a sponge bath, surrounded by telltale amber bottles; in a flashback later that season, we see Rue administer her father’s painkillers before taking some for herself, a moment that’s implied to be the beginning of her drug use.

“I could probably still tell you the medications that my mom took because someone needed to remember those things,” Luebke tells Bitch. “I grew up with needles in my fridge. I wasn’t, but I could’ve been doing muscle relaxers my whole life if I wanted to.”

“My relationship with substances was certainly affected by constantly being around prescribed pills and drugs that some people use recreationally,” says Belle. Initially introduced to prescription medications like Xanax in a caretaking setting, they were “actually really confused and horrified” when they entered high school and found that kids were “selling them to get high.” Although they had “stints with alcohol and stuff,” Belle says they were always wary around prescription drugs. “I’ve seen how people get addicted so easily, [and] how prescription drugs affected my father and grandfather.” Today, they use Xanax to treat their anxiety and handle it with extreme care.

Watching the kids of Euphoria flounder, I recognize the anxiety, fear, and fatalism. I’m familiar with the sense of futility that starts as a seed of helplessness and can come to color your whole worldview. Among all the arguably outlandish drama, that part rings true. Some of my experiences being involved in my own mother’s care throughout my adolescence were devastating. Others were frustrating, embarrassing (for us both), or simply mundane. But they became acutely painful when she suffered in ways we both knew I was unequipped to address—and that we knew could have been better soothed if we’d had the resources.

In one “Euphoria” scene, Rue mentions a “state nurse” who comes by to help her dad and spends her allotted two hours “playing Candy Crush on her phone.”

Unfortunately, undervaluing caregiving culturally and economically is widespread in our society, stemming from racist and sexist origins. Long-term, in-home care is rarely covered by private insurance, leaving Medicaid-provided care, which is already insufficient and under constant risk of further reduction, as the only option. Care work manages to be both underpaid—home care workers make an average of $12 an hour—and inaccessibly expensive, with private care costing an average of $4,000 a month. Additionally, many disabled people face prohibitive income caps.

The result is delicate, life-sustaining work being performed by people who are overworked, undertrained, and underpaid—as failed by the health system as those they’re meant to care for. In one Euphoria scene, Rue mentions a “state nurse” who comes by to help her dad and spends her allotted two hours “playing Candy Crush on her phone.” This situation is all-too-familiar to people like Belle, whose family was at times able to access outside help. “We’re not addressing so many important questions,” they say. “Why is it that the people who are supposed to be caring for people professionally aren’t even able to do so? Because they’re not being compensated well. Because they’re overworked. There are a million reasons.”

As compelling as Euphoria’s scenarios are onscreen, there’s room for further exploration: not just of the trauma childhood caretaking can create, but of the material circumstances that lead to it. Of course, there are far more factors to substance use than access. Rue doesn’t develop the substance-use problems that are central to her narrative simply because her dad’s meds are nearby; their proximity just gives her the chance to use the limited resources available in the same way she has seen her father do: to try to treat pain. 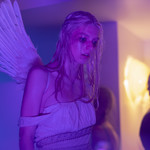 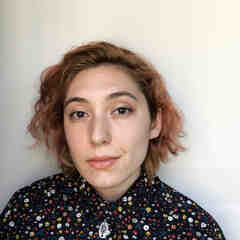 Lindsay Lee Wallace is a writer and over-thinker covering politics and culture.