Examining Trump with a House of Cards | Bitch Media 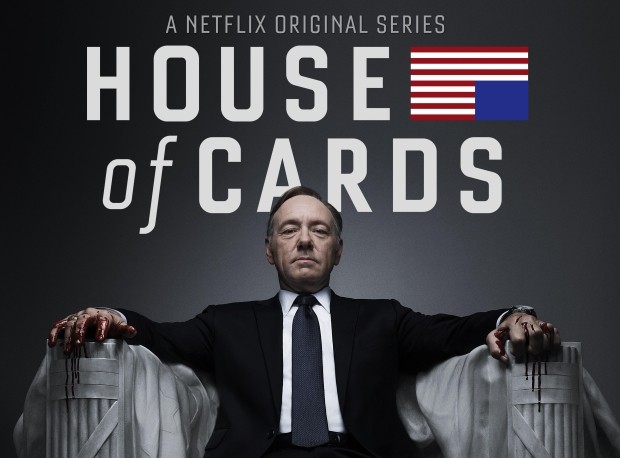 With the Trump administration’s first one hundred days in office, there has been many similarities between the TV political dramas of the past and present reality that have been hitting a little too close to home. Shows such as the the Netflix series House of Cards aka HOC, HBO’s Veep, and the award winning The West Wing, all have a unique take on Washington. Although art does mimic life, and often writers have ripped news from the headlines to serve as the basis of a story line, these days, there is almost too much overlap for comfort. The line between reality and political television drama is wearing thin.

While HOC  fans have been waiting for the latest season for over a year, many have probably been preoccupied with real-life American politics. House of Cards depicts the diabolical political duo Frank and Claire Underwood and their rise to power within the upper circles of government. The trailer for season five could not be darker in terms of the representation of the characters, the literal lighting used, and in the larger plot arcs.

The latest preview opens with a shot of President Underwood and Claire Underwood standing back to back in the Oval office. It then cuts to a scene of the Underwoods walking down a corridor in the White House lined with people and then  jumps to scene of protesters behind a fence yelling with various signs. We then hear a voice over of Frank Underwood saying, “The American people don’t know what’s best for them and I know exactly what they need.”

The trailer moves quickly, with rhythmic music in the background building suspense. A series of shots from the Underwoods in various scenes from the upcoming season are spliced into a quick moving montage. In one of the foregrounding scenes of the trailer, an election map flashes onto the screen revealing the Democratic candidate Underwood in blue with 255 and his Republican counterpart Conway light up as red with 245, with two states—Ohio and Pennsylvania that have yet to be called. In the background the camera catches a glimpse of Underwood 2016 campaign posters. This tension seems all too familiar as HOC writers are directly referencing the 2016 presidential election between Hillary Clinton and Trump.

This depiction of the close race, combined with the devious actions the Underwoods have made in their rise to power seems all too real. Watching these shows may have been cathartic in the past, but rewatching them over the last few months results in anxiety. With the Trump administration’s constant attempts to cover up whatever is the latest occurrence with their version of “alternative facts,” Twitter fights, and executive orders, the Trump White House doesn’t feel too far off from the Underwoods’ presidency.

The desperation for presidential power is palpable and violent. For Trump, his past is ridden with allegations of sexual violence. In HOC, Frank Underwood has killed two people with his own hands; three if you include Rachel (season four) who is killed by Doug, Frank Underwood’s chief of staff, after she has managed to create a new life for herself in New Mexico. In season two Underwood pushed reporter Zoe Barnes onto the tracks of a subway train, and he staged the death of Congressman Peter Russo as a suicide in an effort to silence the larger questions swirling around him.

Trump has also engaged in diversion tactics with the spreading of false information and bullying. Between Trump advisor Kellyanne Conway and press secretary Sean Spicer, there is never a dull news cycle but the Underwood staffers are better at containing the story. Within season three of HOC we see Underwood staffer, Seth Grayson spin the story of Claire’s affair with artist Adam Galloway. Claire leaves D.C. to visit Adam. While she is there, Frank desperately tries to get in touch with her and she ignores him. In an effort to get her back and to change the news cycle, Frank kills Peter which prompts Claire to return to D.C. Months later, photos of Claire from Adam resurface. Seth manages to change the narrative: Adam was simply a hired photographer who was to take the picture of Claire as a wedding anniversary gift and bury the affair he had with Claire Underwood.

In the most recent season of House of Cards, the breakout series from Netflix, there is a lot to unpack in terms of the correlation between Trump and the fictional depictions of the president. While Frank Underwood’s character is the former democratic majority whip, and twenty five year veteran congressman serving South Carolina’s fifth district, there are more similarities between him and the real estate mogul president than people realize. It is in President Underwood’s lack of acknowledgement of others, putting his priorities above anyone else’s, eliminating anyone who gets in his way, and his scorched earth approach that showcases the kind of president he is. Maybe Trump borrowed some tactics from Frank Underwood’s methods.

Note other uncanny similarities. There is Underwood’s failed “America Works” initiative which loses funds because of the way he diverted money from disaster relief to jobs. The failure of this program is very similar to the toothless healthcare plan introduced by the Trump administration. Another uncanny similarity between HOC and Trump is Hannah Conway, Will Conway’s wife. Hannah is from England originally and the couple has two small children. Although there hasn’t been reference to Hannah’s immigration status, this might be a plot twist in season five. Hannah could be seen as a version of Melania Trump, whose past immigration status has been under scrutiny.

There was also uncanny foreshadowing in HOC’s storyline depicting the power struggle with Russia and the precarious relationship between the Underwoods and Russia’s president. Within season three the Russian band Pussy Riot even makes a cameo appearance to spotlight the human rights issues within Russia, in a now famous HOC scene that ends with the band pouring champagne over their place settings, breaking glasses and leaving as Russian President Petrov gives a speech during a White House dinner. These events overshadow the Underwood White House and it always seems to be a race against time to their next big disaster. Anticipating the next disaster is already a trademark of the Trump presidency—from the the firing of the head of the FBI to the failed health care package, to the gutting of the educational budget.

Veep, a political comedy on HBO, offers a very satirical and different take on the political climate. Actress Julia Louis Dreyfus portrays Selina Meyer, a former Maryland senator, who in the conception of the series plays the interim Vice President. Through a series of plot twists, the sitting president declines to run for a second term, leaving Dreyfus’ character free to campaign for the position. The tone is more dramatic and comical, but Veep is more removed from the reality of the current political situation.

In season 6 of Veep, Selina can be seen running a Clinton-esque foundation in the Bronx. This is after losing the presidential campaign at the end of season five due to a complicated legal situation. While she is far away from D.C., politics still plays a role in her life and she is asked to oversee an election in the former Soviet Republic of Georgia. The ties to Russia again come out, but in Veep’s depiction of politics, there seems to be a more direct correlation between Hillary Clinton and life-after-politics rather than referencing Trump directly.

The West Wing however offers an almost comforting, fast take on D.C. politics. Although the series ended in 2006, there is a surprising relevance to today’s political situation. There is a familiarity to President Jeb Bartlet’s brand of politics that seems to be lacking in both the contemporary portrayal of politics, as well as within D.C. in general. Although the Barlet administration within pretend politics represented an East Coast, academic, liberal, white eliticism, there is a level of eloquence and institutional knowledge that is clearly lacking in Trump’s elementary vocabulary and disregard for intelligence and sound counsel. Aaron Sorkin’s D.C. was fast talking, up-to-date on current affairs, and used a moral compass that Veep and HOC don’t seem to offer.

The West Wing offered a more hopeful approach to politics particularly in the final season of the show with Matt Santos running as the first Latino presidential candidate. The Bartlet administration was not without controversy within their lack of disclosure of him having multiple sclerosis. This sets up a very difficult campaign run for Jeb Barlett and his staff trying to win a second term. Season five of the West Wing also offers a very interesting insider look into the naming of a Supreme Court Justice and through the process, President Barlett is able to appoint the first woman to the bench. The backroom dealings of the process seemed all too real with the appointment of Judge Neil Gorsuch.

Within contemporary portrayals of American politics, and the realities surrounding the Trump administration, it is hard to thwart off the impending feelings of doom, destruction and anxiety. It seems as if the level of corruption has reached a breaking point, and what we are witnessing is not an episode of House of Cards, but is real life. This larger cultural anxiety has resulted in a growing wave of vigilance surrounding media practices and consumption. Facebook has implemented a filter to spot fake news and the site has also been called out in the spreading of fake news during the 2016 election within their algorithms. This has also put into question the way young people digest facts through the media and has resulted in a new measures to use check and balances to be taught in the classroom. Trump has also taken to Twitter to call out various respected news sources such as CNN and the New York Times to accuse them of spreading lies.

The troubling reality is that while we are viewing these shows in an effort to escape, they are simply looping us back into this blurred line between reality and fiction. What, then, do we as consumers of popular culture learn from being more present when we watch these political shows?

These shows do offer viewers a chance to see worst case scenarios played out and resolved within the span of forty five minutes, however this is not the world we live in. By actively deconstructing these shows, there is a larger level of discourse that can emerge between the way information is disseminated within the media and in popular discourse. By engaging the content of the show, being aware of the portrayal of gender, race and class, as well as having a healthy media diet and reading various sources that range from liberal to more conservative can lead to more engaged viewing practices. Through larger cultural critiques, it is my hope that truth surrounding political realities can be further revealed. 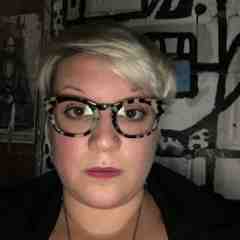 Anni Irish’s work focuses on the representation of bodies, popular culture, art and the social history of tattooing in America. Irish currently holds a BFA from the School of the Museum of Fine Arts/Tufts University, an MA in Gender and Cultural Studies from Simmons College, and an MA in Performance Studies from New York University. Irish has been a contributing writer to Teen Vogue, VICE, The Village Voice, Bomb Magazine and others.  She has also presented at numerous academic conferences and has also guest lectured. She is currently adjuncting at the School of Visual Arts. She is currently developing a manuscript on American female tattooing practices. Irish was born and raised in Manchester, CT and resides in Brooklyn, with her mini lop rabbit, Isabella. Follow her on Twitter here.

by Sarah Mirk
Holy transphobia! Republicans are using transmisogyny as a get-out-the-vote effort.