Eyes On the Prize: Donald Trump and the Need for Election Observers | Bitch Media

Eyes On the Prize: Donald Trump and the Need for Election Observers 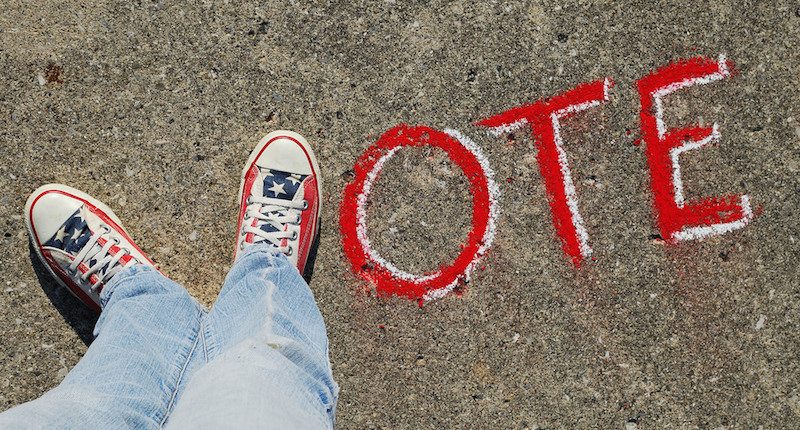 The 1950s reboot being hosted by the Republican Party may actually be worse than the original—I keep hoping they’ll cancel before the end of the season, but they appear to be sticking it out despite cratering ratings. Now, Donald Trump is proposing a revival of something that crops up in reruns now and then but hasn’t been widespread since the 1980s: The use of “election monitors” as a form of voter intimidation.

“Help Me Stop Crooked Hillary From Rigging This Election!” he states on a page inviting his fans to sign up as Trump Election Observers. At The Nation, Ari Berman points out that this was almost inevitable, the moment the campaign has been barreling towards for months as it watches Trump’s polling numbers fall. The only way for Trump to win the election is to steal it—and what better way to do it than to claim the other gal did it first?

Oddly enough, Trump’s not wrong: This election does need observers, as has every election in U.S. history. The Department of Justice, in coordination with the Office of Personnel Management, actually has an entire election observer program. These specially trained federal employees fan out across the country to keep an eye on hotspots known for voter suppression problems, and they push to secure the voting rights of all Americans.

Well, they used to, anyway. In 2013, the Supreme Court’s decision in the case of Shelby County v. Holder changed the electoral landscape forever by cutting a key provision of the Voting Rights Act of 1965. Congress passed the VRA, of course, in response to systemic voter suppression and electoral injustice, and it has become a key piece of legislation in the fight for voting rights. The Shelby County v. Holder case  specifically revolved around something called the “preclearance requirement,” which was based on the “coverage formula.”

Read This Next: Donald Trump Voters Are Nostalgic for a Simpler Time—That Never Existed
Read This Next: What’s the Republican Recruitment Strategy? Racism Plain and Simple

That may sound like a lot of static, but don’t touch that dial. We’ll see if we can clear the picture up a bit. The preclearance requirement in the VRA mandated that areas with histories of racialized voter suppression had to receive permission before making substantive changes to voting laws that might have suppressive effects—like, say, passing voter ID laws. Basically, the VRA handled these historically racist areas like the skeptical parent of a kid who’s already crashed the family car once: He needs to explain what he wants to do with the car before you’ll let him have the keys again.

So how did anyone decide which areas required preclearance? Excellent question, and it was answered by the VRA’s Section 4(b): the “coverage formula.” States using tests (like character requirements or literacy tests) to determine who was allowed to register to vote as of 1964 were covered, as were states where less than 50 percent of the eligible population was registered to vote as of 1964. In 1975, Congress renewed the coverage formula and added an element: Areas that discriminated against “language minority groups,” specifically defined as people who were “American Indian, Asian American, Alaskan Natives or of Spanish heritage,”were also included.

In 2013, in the Shelby County v. Holder case, the Supreme Court, in its estimable wisdom, decided that the coverage formula was unconstitutional because the data and standards it relied upon were outdated. The justices did comment that “any racial discrimination in voting is too much,” however, and suggested that perhaps Congress ought to do something about that. This decision had far-reaching repercussions (note, for example, the jump in voter ID laws after 2013). It also rang alarm bells at the Department of Justice, which decided that because they used the coverage formula to dispatch election observers, they would have to scale back their election observer program.

Historically, there were three types of election observers: DOJ personnel sent out to watch elections (who could only enter polls with permission), Office of Personnel Management observers dispatched in response to court orders, and OPM monitors “certified” by the attorney general to work in areas without court orders. DOJ personnel can continue to monitor elections today, as can OPM staffers in the five states with court orders. But it turns out that the vast majority of election observers actually fell under this third group, which was determined using our old friend, the coverage formula. If the coverage formula is unconstitutional, logics the DOJ, then the observers are too. In sharply worded remarks about the decision, Attorney General Loretta Lynch has said that Congress ought to do something about this.

“In its ruling,” she commented, “the Supreme Court made clear that Congress has the ability to establish a new system for determining which jurisdictions are subject to preclearance – a step that would restore Section 5 to its full effect and restore our capacity to protect.  I have repeatedly urged Congress to embrace this opportunity.”

So, we have Donald Trump rising to the rescue, perhaps the last person anyone wants running an election-monitoring program. That includes the GOP, which actually already got into hot water over this in 1981, when they engaged in widespread voter intimidation, Democrats sued them, and they agreed to a much-challenged consent decree ordering them not to do it again. (“Mom, I swear, I’ll only drive to the store and back. You won’t even know I’m gone!”) This wouldn’t be the first time Donald Trump has flagrantly violated the law and the wishes of the RNC, of course, but if his push is successful, it could have some pretty ugly consequences.

If you’re envisioning screaming protesters outside of polling places, waving signs and harassing anyone who tries to enter, you’re not alone. And that vision reminds me of something else: Substitute “polling place” with “reproductive health clinic.”

This leads me to wonder if it’s perhaps time to send out an army of election escorts this year, all outfitted in brightly colored vests to make them easy to identify. It’s perfectly legal to escort voters to the polls as long as you don’t attempt to interfere with their abortions votes, which means no electioneering, no following them into voting booths, and no attempting to mark their ballots for them. Hopefully we can all be grown-ups and handle those directions. It sounds like some people are going to need escorts to protect them from screaming protesters pretending to be concerned about the process, because this is 2016 and a brave new political world. If the Supreme Court and the DOJ won’t protect us, we’ll have to protect each other—because there’s no way Congress is going to pass a robust suite of voter protection laws in time if Donald Trump’s “election observers” plan to hog the remote this November.

Read This Next: Donald Trump Voters Are Nostalgic for a Simpler Time—That Never Existed
Read This Next: What’s the Republican Recruitment Strategy? Racism Plain and Simple