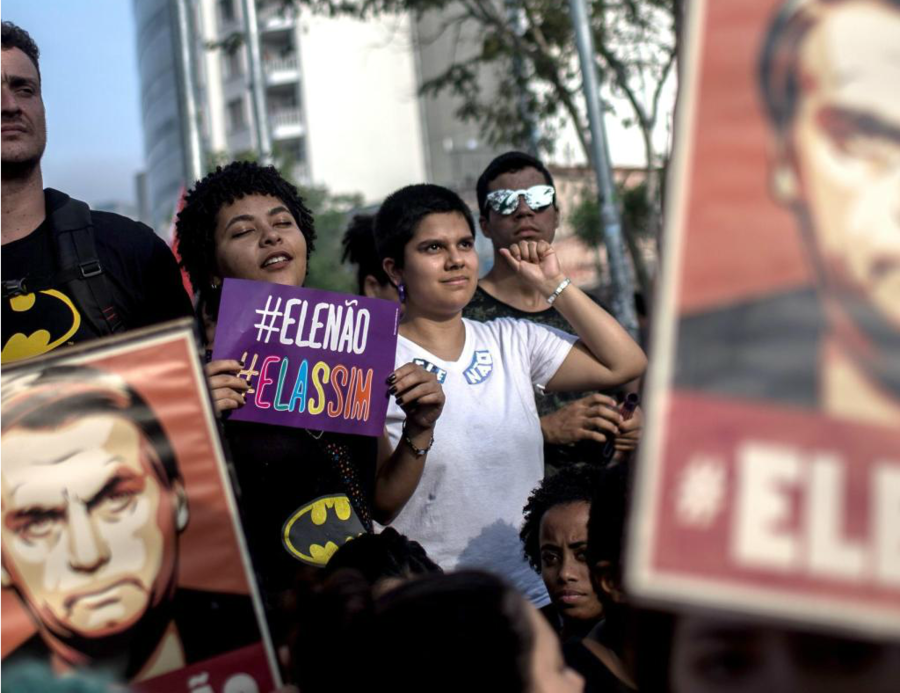 After the election of Donald Trump in the United States and the vote to leave the European Union in the United Kingdom, another country is living in a time of deep polarization: Brazil. After a divisive first round of elections, the country will this weekend choose between a far-right extremist—Jair Bolsonaro, for the Social Liberal Party (PSL)—and the left-wing philosophy professor Fernando Haddad, for the maligned Worker’s Party (PT). Bolsonaro is currently leading in the polls, predicting 46 percent of votes for Bolsonaro, and 29 percent for Haddad.

Bolsonaro is his very own breed of fascist, but Western media has taken to calling him the “Brazilian Donald Trump.” The Guardian reports Bolsonaro “has openly cheered dictatorship and publicly insulted women”; he’s been described as “the most misogynistic, hateful elected official in the world” by The Intercept; and as an “ultra–right-wing authoritarian” by Vice. There are mountains of evidence of his authoritarianism, misogyny, and homophobia: a video in which he asserts that Brazil was better off under a dictatorship, another where he tells a fellow member of Congress that she’s too ugly to be raped, and yet another in which he says being gay is the result of a “lack of beatings.” His inflammatory rhetoric over his 26 years in Congress squares with his campaign promises, which include building more power plants in the endangered Amazon and taking land from protected Indigenous ethnicities across the country.

How can such an outspoken fascist be doing so well in the polls? One reason is that Facebook-owned social-media messaging app WhatsApp—dubbed by the Nieman Lab “a black box of viral misinformation”—has been integral to Bolsonaro’s campaign. The app is the preferred messaging service of Brazilians, who use it to keep in touch with family and friends, for work, networking, and general socializing. The group Eleições Sem Fake (Election without Fake News), which monitors 350 political group chats on WhatsApp, reports that it is “just as overrun with misinformation as Facebook.” While the monitoring is essential, it’s impossible to track how much fake information is shared in private group chats between friends and family.

Eleições Sem Fake has been diligent in tracking the fake news that circulated during the election, including rumors that Bolsonaro supporters were being turned away at the polls. As with Trump both before and since the 2016 U.S. election, there’s a sustained disinformation campaign to paint Bolsonaro supporters as unique victims of society; the strategy to grow his base has been to make people angry, and in particular to direct that anger at the Worker’s Party, which is generally blamed for everything that’s wrong with Brazil. So though many Bolsonaro voters  admire his extremism, much of his support comes from those voting against the left-wing party that supposedly destroyed the country. A Brazilian “anti-establishment” politics, tailored to the specific issues that make Brazilian people angry, are in turn making bigotry more acceptable in society.

Corruption crimes committed by left-wing politicians and policies to aid social inequality are represented as a culture of “living off the state” rather than “doing it for yourself”; laws to incentivize the arts are deliberately represented as a way to produce leftist propaganda and displace public funds into artists’ pockets; and affirmative-action quotas are blamed for the lack of funding in public universities. Bigotry, neoliberalism, and anti-leftism are all rolled into one, with easy reasoning and more acceptable packaging than outright hatred. The pattern rings harrowingly similar to both the rise of Trumpism and the Brexit vote, both of which allowed conservative governments to mainstream and further entrench hateful policies in those countries.

As with Trump both before and since the 2016 U.S. election, there’s a sustained disinformation campaign to paint Bolsonaro supporters as unique victims of society.

Flavia Dzodan, a writer who for years has tracked right-wing harassment campaigns online, theorized in 2017 that online right-wing networks succeed in large part because they are untrackable, decentralized assemblages that deploy harassment, intimidation, and abuse to intimidate their marginalized targets and warn others of their power. Tailored disinformation with intent to draw in and radicalize new users is also key to these, in Dzodan’s words, “rhizomatic” networks, with abuse and intimidation seeping into offline “real” life. As in the United States and the United Kingdom, families in Brazil are extremely divided, with constant arguments and falling-outs both online and off. Since Bolsonaro’s victory in the first election, racist, homophobic, xenophobic, and outright Nazi graffiti has appeared throughout the country, and hate crimes—many that cite Bolsonaro’s rhetoric as motivation—are on the rise.

These networks are chaotic but functional, their nodes populated by political campaigns and individual right-wing ideologues alike, churning out memes and fake news at an impressive speed. Every day brings more news about bogus profiles on social media, disinformation offensives, and general online warfare to Brazilian and international media. And again, the efforts to malign everything associated with left-wing politics—including human and civil rights—as encroaching communism will look very familiar to Americans and Britons.

It is time to consider that this is what a global push for right-wing extremism looks like. This is what the overhaul of our technologies to fascist assemblages looks like. Brazil will need all the solidarity and help possible from the global left, but the deeper issue we must confront  right now is that this is not just an online problem, or a tech problem, or a political problem—it is global fascism, and it is here.

7 Congressional Races That Could Reshape the Country