When Faking It Is a Form of Self-Protection 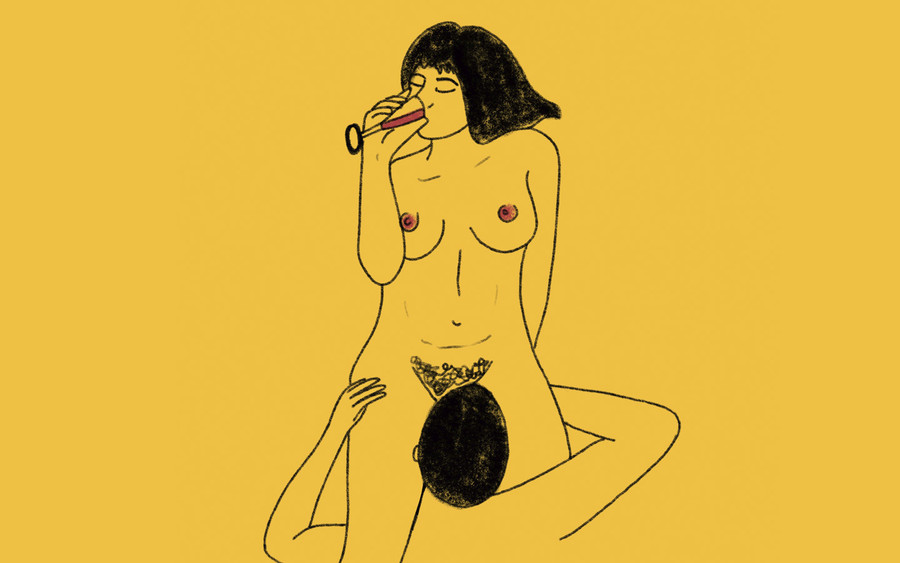 The growing accountability for sexual misconduct serves as an important reminder that intimacy between two people is never a given. This is a fact that both literature and women know well: For every op-ed lamenting the “death of the chase,” there’s a literary work that considers the nuanced realities of female sexual experience. The pursuit of pleasure frequently calls for a moment-to-moment negotiation of power dynamics, a shifting line that’s explored in three standout novels of 2018: Akwaeke Emezi’s Freshwater, Ottessa Moshfegh’s My Year of Rest and Relaxation, and Laura van den Berg’s The Third Hotel. These texts share an interest in the critical moment when the switch flips, redirecting the goal from pleasure to self-protection. Sometimes, that moment necessitates that we fake it.

I use “faking it” in a fairly creative sense—not just to refer to climax, but to describe any kind of feigned enjoyment, whether the performance is intentional or beyond the person’s conscious control. In each of these novels, feigned pleasure is a way of coping under threat. The women in these books use imagined or manufactured pleasure as a way to diffuse some kind of violence, flipping “faking it” into a form of psychological protection.

These self-protective acts often stem from the same basic terrors: the reality of having a body and the minefield of how to relate to others. In Emezi’s sinuous Freshwater, embodiment represents a particular kind of violence. The novel’s protagonist, Ada, is born an ogbanje, an Igbo spirit who houses distinct selves within her body. For years, Ada negotiates a delicate balance between the selves. Part of this balance involves a deliberate abstinence from sex—the work of the selves, who seek to “[keep] her neutral”—until Ada meets a boy in college who believes himself above her rules. In the aftermath of a traumatic sexual assault, her selves start to crystallize and assume greater agency. The novel introduces a new voice, Asughara, who controls Ada’s body during subsequent sexual encounters and thereby allows Ada’s psyche to stay cordoned off. This simultaneous presence and absence gives the appearance of pleasure, while protecting Ada from experiences she would otherwise find unbearable.

Ottessa Moshfegh’s protagonist shares the desire “to escape the prison of [her] mind and body,” albeit for very different reasons and by vastly different means. This unnamed young woman—wealthy, white, Columbia-educated, and, as she reminds us at any opportunity, very attractive—believes that a yearlong hibernation will provide a purifying reset, one from which she will emerge ready to engage with the world. Aided by a terrifyingly incompetent psychiatrist, she spends her days downing pill combinations to induce lengthy stretches of sleep that she breaks only to eat, watch movies, and visit the bodega.

The novel is frank, even glib, about the soaring levels of privilege this project takes to maintain. But the novel is equally frank about the narrator’s pain: Both her parents are deceased, her mother by suicide; her childhood held little affection; she has just been fired from an art gallery (for sleeping on the job); and she’s involved with an abhorrent man whose idea of pleasure involves him receiving oral sex while the narrator is asleep. This is feigned pleasure of a different kind: a narcotized absence of pain to dull an existential isolation. It’s impossibly selfish and prohibitively expensive for the 99 percent, but it’s also, at least to this young woman, “self-preservational”—presenting a chilling satire of our notions of self-care.

The pursuit of pleasure frequently calls for a moment-to-moment negotiation of power dynamics, a shifting line that’s explored in three standout novels of 2018: Akwaeke Emezi’s Freshwater, Ottessa Moshfegh’s My Year of Rest and Relaxation, and Laura van den Berg’s The Third Hotel.

Laura van den Berg’s The Third Hotel depicts a woman similarly marooned. Clare, an elevator sales representative, uses work as an excuse for staying distant from her husband, Richard, a film scholar. After his death in a car accident, Clare travels to Cuba for a film festival that he was meant to attend. Despite her absence from their marriage (she favors solo travel, lying naked on hotel bedspreads and counting her breaths in the dark), she is devastated by his death. Feigned pleasure manifests as a symptom of grief: While in Havana, reality blurs, and Clare hallucinates a relationship with Richard, forging a closeness they never shared in life. Like Ada’s dissociation, or the self-medicating of Moshfegh’s protagonist, this fantasy is an attempt to buttress the psyche against a devastating reality. The imagined intimacy is restorative; Clare’s mind fools itself in order to cope and attains partial peace as a result.

With unreliability continuing to be a highly gendered accusation, the psychological depth of these texts both complicates and emphasizes the need to believe women. The scaffolding put up as protection by these protagonists isn’t always advisable, but each in its own way is necessary. These books remind us that the performance of pleasure can act as a means
of survival.