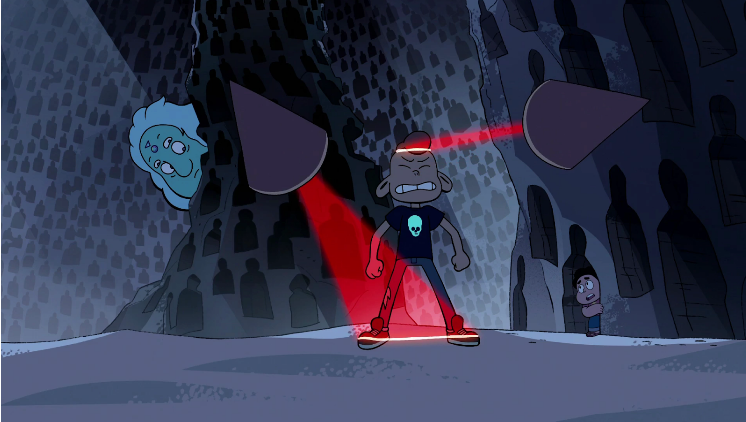 This contains plot details for the fifth season of  Steven Universe.

In its fourth-year run, the Cartoon Network series Steven Universe has garnered critical attention and kudos for exploring themes of queerness, identity, and intersectional feminism, all while keeping family audiences firmly in mind. The show’s existence and resulting popularity with various communities is a testament to just how powerful narratives can become when their origins are honored. Through the coming-of-age story of its titular character, we witness a unique account of a wholesome, half human/half gemstone, kid who struggles to navigate the complicated colonized world in which he lives. Thankfully, he is not alone: Steven’s support network includes the Crystal Gems, his guardians and members of a rebel force that comprises of Garnet, Amethyst, and Pearl; his human father, Greg Universe; his best friend, Connie; and his magical pet, Lion.

The first season of the show establishes that the Crystal Gems began a rebellion on Earth against the intergalactic empire of Homeworld a millennia ago, an effort that was led by Steven’s own mother, Rose Quartz, who created Steven by giving up her physical form. As ageless gemstones with projections of humanoid forms, the Crystal Gems have spent the past 5,000-plus years battling the interstellar empire that created them and kept them subservient in a completely hierarchical society called Homeworld.

The show’s most recent two seasons have developed the Gems’ origin story and their revolt against the colonial agenda of the Diamonds, a group of dictators who exert control over Homeworld and its citizens. In the first season, viewers learned that the Crystal Gems came to live on Earth because they saw it as their duty to save and protect its citizens from Homeworld’s colonizing leaders; Rebecca Sugar, the creator of the show—and the first woman to create a Cartoon Network cartoon series—uses Season 4 to begin unmasking the faces of these leaders. In laying out the origins of  the Crystal Gem Rebellion, the narrative acknowledges that the Gems themselves were once complicit with Homeworld’s colonizing mission, and an active part of its operations. The acknowledgment of “positionality”—the conditions under which the Gems have come to occupy their roles in this world, and their acknowledgment of the dynamics that sustain those roles—is part of what makes Steven Universe so great. The dictator-like and colonizing Diamonds at the top of the stratified Gem society inform how the rebel Crystal Gems themselves navigate their positions of power and autonomy—their positionality—in relation to Steven, other Gems, and other beings across the galaxies.

Intentionally setting out to deconstruct boundaries, particular around the gender binary, Sugar’s world building is executed in a way that allows for discussions about our real-world society by using the constructed colonial universe of Steven Universe. The Diamonds force-fuse hundreds of Gems into a giant Cluster at the core of the Earth, intent on making the planet a Homeworld geo-weapon. This isn’t at all separate from the white-supremacist legacy of colonizing indigenous lands, setting up military occupations, and weaponizing stolen resources to accumulate new riches—all forms of violence that imperialist countries like the United States continue to this day.

Amethyst’s story is especially instructive in interrogating the binary of colonized and colonizer in that she never knew Homeworld like her peers Garnet and Pearl, and in illustrating why the Diamonds invaded Earth to begin with. The Earth colonized by the Diamonds is divided two Kindergartens, where the Diamonds created soldiers to carry out their colonizing mission. Amethyst is what Peridot, a Homeworld Gem-turned-Crystal Rebel, would call a “defective quartz”—not only was she born on Earth, but she also fails to conform to the appearance of her fellow Quartz soldiers. She, along with Peridot and other Homeworld Gems, internalize their colonizers’ beauty ideals—a struggle familiar to any current human navigating the institutional racism and colorism that pervades mass media and pop culture, continually reproducing oppressive ideas and gatekeeping opportunities for folks to construct narratives on their own terms.

If the parallels to real-life historical colonialism weren’t clear enough, Steven Universe’s world includes an actual zoo full of captured Earth humans. Though it’s much better maintained than the human zoos constructed in the 18th century to imprison and exhibit Black people like Saarjie Baartman, it nevertheless mirrors the disturbing colonial fascination with “othered” beings. The distinction between Homeworld Gems and colony-born Gems reinforces status according to both their birthplace and their success in embodying the colonizer, not unlike the way Western cultures treat immigrants and fetishizes people of color internationally. The Diamonds have clearly exalted their own gem type for millennia, attaching value to certain kinds of Gems and creating social relationships based on a system of control from the Great Diamond Authority. This definitely calls into memory the way flags and nationalist markers are used in instances of border imperialism, always granting white colonizers the mobility needed to occupy new lands and terrorize indigenous peoples. We even see insignias of each Gems’ assigned Diamond woven into their everyday uniforms, a map of control imposed on the body of each obedient Homeworld Gems.

Breaking down Steven Universe’s power dynamics, like interrogating the worlds of the Hunger Games or Harry Potter, offers a pop-culture framework for all ages to understand how oppressive systems function in existing societies. By understanding that the Great Diamond Authority has constructed a hierarchy of Gems and asserted themselves as all-controlling, godlike leaders, we also understand the disturbing power imbalance that results. This caste system ostracizes “defective” and “off-color” gems, placing them at the very bottom of the hierarchy and empowering a policing system to detect such gems, which are then shattered on sight. Does this remind you of anything? I know what it reminds me of: All the ways in which the U.S. police state has been a strong arm of white supremacy, waging a centuries-long, one-sided war against Black folks.

One of Steven Universe’s central concepts is fusion, an intimate connection whereby two Gems—or, sometimes, a gem and a human—become a joined entity. Fusion is a physical embodiment of love, though Homeworld has denounced and criminalized it as an abomination (with some exceptions and leniency for same-Gem fusion of soldiers working for the Diamonds). Fusion is a clear metaphor for healthy relationships that prioritize consent, communication, and genuine connections; however, as others have argued, the concept works best when we don’t sexualize these romantic relationships—because they are so much more than just one form of intimacy and connection.

But it’s important to note that such utpoian portrayals of fusion still fall prey to reconstructing colonial myths. The Black-coded Garnet’s fusions with other Gems, for instance, have been read as reproducing hypersexualized racial understandings of queer bodies. Each of the Crystal Gems, in fact, have different readings that mirror real-life racial coding and oppression: Garnet is a fusion of two different gems, Pearl is fighting a minority model myth, and Amethyst is an apt example of the “hybrids” produced by the Gem colonizers’ war technology and the resulting ambiguity of diaspora. Despite these differences in identities, the Crystal Gems work together to protect the Earth not as saviors but as beings who must fight against the imperialist structures that produced them. And they do so with kindness, respect, and a deep care that resonates through their years-long collective commitment fighting for the safety of those on Earth.

All this makes it unsurprising that Steven Universe is much more than a simple cartoon. It serves as text that highlights the importance of navigating positionalities and rejecting colonial projects, whether on Earth or in intergalactic empires. Though colonialism is often treated as part of a long-ago history, it is far from it: The ongoing political control of “third-world” countries, occupations of indigenous lands, and socioeconomic exploitation of people of color by Western nations is not at all unlike the rule of Homeworld Gems. In a time when global fascism is on the rise, the narratives we create and consume matter, and Steven Universe is one that drives our relationship with pop culture away from meaningless consumption and toward a greater responsibility. It calls for us to do our part, as consumers and critics, to pursue a fight much like that of the Crystal Gems—a battle for the freedom and safety of those put in harm’s way by violence that they had no hand in creating.

Relevant: Cartoons and the commercialization of childhood