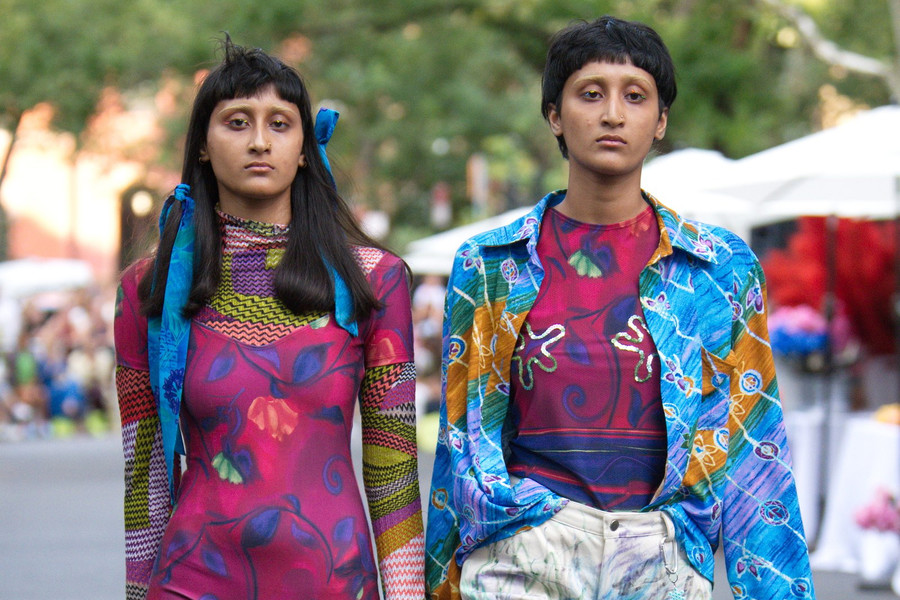 The most recent Fashion Week, Spring/Summer 2020, was rife with the promise of sustainability. Dior’s show at Paris Fashion Week featured 164 trees in a picturesque grove, each of which will be replanted at “sustainability projects” around Paris. At New York Fashion Week, Collina Strada staged a farmers market–esque spectacle that emphasized the brand’s commitment to using eco-friendly materials. Milan Fashion Week closed with its third presentation of the Green Carpet Fashion Awards, which are given to “members of the fashion community effectively committed to embracing real changes in the system’s production chain.” In 2019, fashion that isn’t sustainable seems to be going out of style.

This isn’t necessarily new: In the mid-2000s, major magazines like Vogue, Elle, and Vanity Fair began producing special “Green issues” and “eco-fashion” became the hot new thing—for a while, anyway, until something new came along. Yet even the lip service paid to reducing the fashion industry’s environmental footprint is a tough act to pull off: No matter how much recycled fabric is used or how many ethical factories are set up, the seasonal cycle of trends around which the industry revolves is a fundamentally unsustainable system that requires production of clothing at a rate that our environment simply cannot keep up with. In this light, perhaps the most radical act of sustainability is the Swedish Fashion Council’s recent decision to cancel Stockholm Fashion Week altogether. Announced in July, a month before the event was to take place, the move was, according to the CEO of the Swedish Fashion Council (SFC), a chance to “adapt to new demands, reach sustainability goals, and be able to set new standards for fashion.”

There is a host of reasons for other countries to follow in the SFC’s footsteps. Fashion shows bleed money, have historically been terrible at inclusion, and add to environmental pollution not just through fabric waste but also due to the sheer number of designers, models, magazine editors, stylists, photographers, hair and makeup artists, and assorted others flying to and from  shows. The biggest arguments for keeping the relic of Fashion Week going is that it provides a critical opportunity for young designers to be seen, encouraging creativity by offering established designers a stage for what is, after all, an art form—a place for the extravagant, exciting things that just aren’t possible in showroom settings.

There was a time when both of these arguments held up, a time before the collapse of the environment wasn’t as imminent as it is now. A few decades ago, runway shows around the world were one of the few available ways to present upcoming collections to magazine editors and retail buyers. They became big business in the 2000s, with celebrities clogging the front rows once reserved for the fashion press. These days, they just seem out of touch with reality: In a time when we have Instagram, YouTube, and an oversaturation of fashion blogs, the monolith of Fashion Week is no longer as necessary as it once was. And with so many alternate avenues for marketing and showcasing the abundance of work already out there, clinging to the tradition seems not just immoral but uncreative.

The fashion industry has built itself on self-referentiality, allowing trends to cycle through season after season with few alterations; a few buttons here, a slightly higher neckline there. Haute couture still inspires reverence, but the big ready-to-wear labels offer the same basic silhouettes every season, regurgitating trends⁠— “military-inspired,” “ladylike,” “man-tailored”—and marketing them as innovations that are somehow completely different than they were the last time around. This isn’t necessarily a bad thing. Fashion is inherently cyclical, and its ability to reference history through fabric, structure, and tailoring is perhaps what makes it so easy to attach sentimental value to. But instead of encouraging creative recycling, this cyclicality has been harvested by capitalism in service of mass consumerism. As a result, mounds of clothing are churned out by brands year after year, with designers forced to produce garments to fulfill the trendy nature of the industry.

Aside from causing massive damage to the environment and widespread labor abuses of (mostly female) workers in the global south, fast fashion has become a force that doesn’t facilitate creativity but destroys it. It’s not just the fashion industry that’s suffering the destructive effects of late-stage capitalism’s relentless production demands: Creators across industries are plagued by burnout. The social-media influencer space is particularly susceptible to this, thanks to its reliance on a constant, fast-moving abundance of content to stay relevant. A series of content creators, including big names like Michelle Phan and Lilly Singh, have shared their frustrations with the stress of having to churn out content constantly, even just to maintain their incomes.

Prominent beauty bloggers like Samantha Ravndahl are also pushing back against the culture of PR gifting that compels them to create the same kind of haul or review content over and over again: “Every time a new product was sent to me, I’d look at it and think, Well, it’s here, it’s new, I might as well review it. That was not the kind of content I would want to watch… It was clogging my ability to create.” The dread of sinking into mediocrity in the pursuit of quantity is common. As YouTuber and filmmaker Matt Lees describes it: “It’s not enough to simply create great things… The audience expects consistency. They expect frequency. Without these, it’s incredibly easy to slip off the radar and lose favor with the algorithm that gave you your wings.” The first part is more surprising than the second. While it seems self-evident that content consumers want consistency from creators, are we really willing to give up quality in exchange for it?

Industries like digital content creation and fashion are particularly deceptive (and interconnected) spaces because, on the surface, they so wholly champion individual expression.

Unfortunately we’re not the ones who get to decide that. The “algorithm”—a term that has become shorthand for the systems set in place to reward constant production—conditions media consumers to expect frequent content. We want our favorite Twitter accounts to always be funny. We demand that our favorite YouTubers commodify every moment of their lives to remain relevant because the algorithm rewards those who do. Thus, iteration upon iteration of travel vlogs and shopping hauls gesture us right back to the industries waiting to prey upon our manufactured need for new commodities. The paradoxical chicken-and-egg-ness of it all is that even when influencers like Ravndahl push back against capitalistic notions of creativity, they end up losing out because consumers have been conditioned to expect the same standard content at speeds that are fundamentally unsustainable.

Industries like digital-content creation and fashion are particularly deceptive (and interconnected) spaces because, on the surface, they so wholly champion individual expression. There’s a veneer of creativity that protects these industries from being exposed for the unsustainable production machines they really are. In reality, as influencers are expected to churn out run-of-the-mill content to be recognized by the algorithm, the seasonal nature of the fashion industry forces designers to fill racks from season to season. In both cases, the existence of a product is more important than the work that goes into creating it.

As this set of Fashion Weeks comes to a close, let’s hope it’s one of the last. Creative people in all industries deserve to have time to create, rather than investing all their energy into producing for the sake of producing. The only way that can happen is if industries are radically overturned—algorithms reconfigured, seasons abolished, instant gratification abandoned. And all of this depends on everyone in the pipeline between creators and consumers being willing to sell less, buy less, and earn less. As long as spectacles like Fashion Week continue to exist, with or without eco-chic trappings, sustainability itself will remain a consumer appeal rather than an act of preservation. Trapped within these confines, creativity continues to inch toward obsolescence.

Read this Next: If the Resistance Fits