Even during a Pandemic, Fatphobia Won’t Take a Day Off 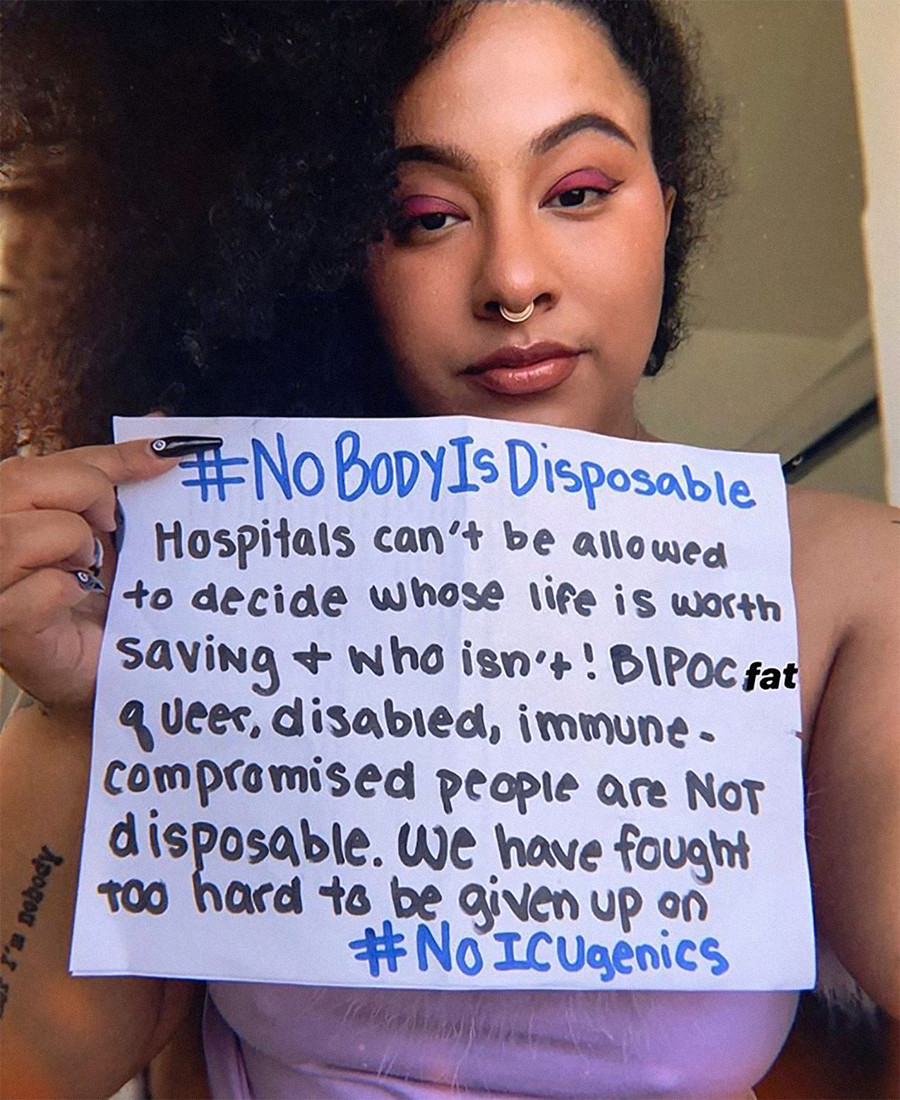 On March 15, 2020, as COVID-19 spread throughout Washington state, neurologist Scott Mintzer’s now-deleted tweet ignited a social-media firestorm: “Seattle has 12 machines, which is less than what’s needed. So a central committee there is deciding: You can’t go on [an extracorporeal membrane oxygenation machine] if you’re [over] 40 years old, if you have another organ system failing, or…incredibly…if your [body mass index] is [over] 25. Turns out these are all major poor prognostic signs.” Mintzer’s tweet panicked some fat people, who began posting about their fear of being denied ventilators if they contract COVID-19. In late March the hashtags #NoBodyIsDisposable and #NoICUgenics began trending on Twitter, with users calling on government officials to distribute more medical equipment and asking hospitals to not let marginalized people—fat, disabled, HIV positive, chronically ill, elderly—die.

The Trump administration had months to prepare for this pandemic; after all, there are 2,000 ventilators sitting unused in the Pentagon because the White House won’t designate where to send them. Shortages could have been prevented and can still be remedied. “Seeing BMI requirements for who gets access to lifesaving treatment for COVID-19 makes me sick to my stomach,” body-positive blogger and eating-disorder therapist Shira Rose tweeted. “The irony that I’d need to destroy my health via anorexia to be ‘healthy’ and ‘worthy’ enough for treatment if I needed it is exactly what breeds [eating disorders] in the first place.” 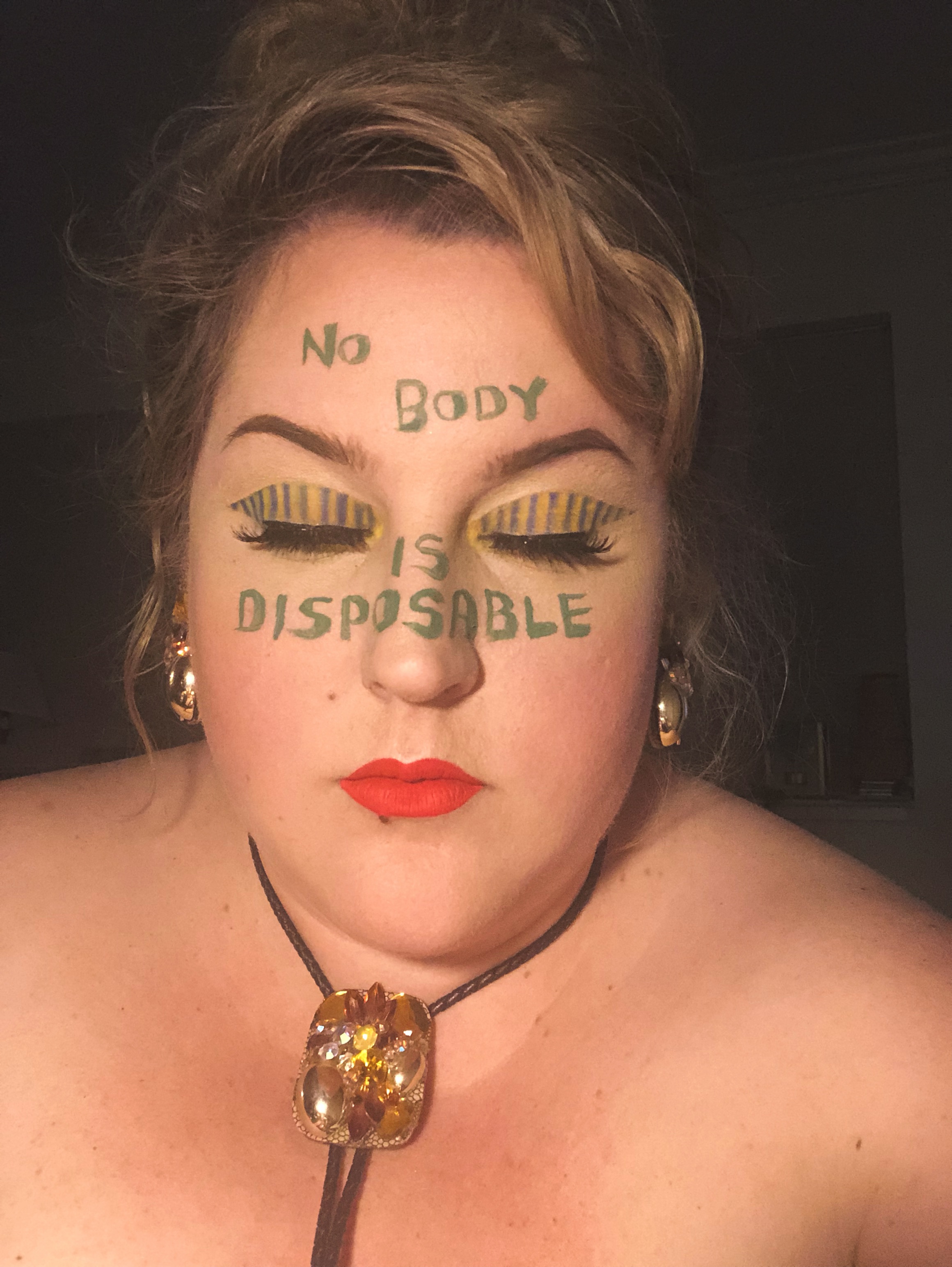 Tracy Cox, an award-winning operatic soprano and fat politics artist and activist, posted this photo on her Instagram on March 30. (Photo credit: Courtesy of Tracy Cox)

Though it’s unclear if Mintzer’s tweet has any veracity (since it wasn’t accompanied by reporting), Rose’s fears are valid: Fat people are routinely denied medical care. Many surgeons refuse to operate until patients lose weight; and for routine health concerns, thin patients are more likely to receive a diagnosis and treatment plan than fat patients, who are often told that losing weight will solve their ailment. Withholding medical treatment until a nearly impossible task is completed—most cannot lose weight and 90 percent of those who do regain it—is the very definition of discrimination.

Throughout the pandemic, Dr. Anthony Fauci, the leading COVID-19 expert in the United States, has repeatedly said that heart disease, lung disease, diabetes, and “obesity” make people more at risk for developing a severe case of COVID-19. But only three of these are actual diseases. So-called “obesity” is an arbitrary designation based on the unscientific body mass index (BMI). While Fauci believes he’s helping Americans keep themselves and their loved ones safe, he’s actually dressing medical fatphobia up as medical fact. Likely taking their cue from Fauci, journalists have been writing articles that link “obesity” to COVID-19, prompting Christy Harrison, author of the 2019 book Anti-Diet: Reclaim Your Time, Money, Well-Being, and Happiness Through Intuitive Eating, to call on “news outlets…to STOP reporting that body size is an independent risk factor for COVID-19.”

Harrison noted that a recent article from Reuters claimed “obesity” is causing Louisiana’s high death rate because a quarter of those who’ve died are considered “obese.” However, a quarter of the state’s residents are “obese,” so BMI doesn’t affect the risk of complications. If it did, we’d see a larger percentage of fat people hospitalized. And yet, credible news outlets, as well as our country’s top epidemiologist, are so indoctrinated with fatphobia that they’re ignoring simple statistics. When someone with Fauci’s clout makes pronouncements, it has consequences. Do I believe what he says will lead to doctors denying fat people ventilators? Yes. Do I think this would have happened without Fauci’s claims? Yes. Fatphobia has been an integrated part of our medical system long before COVID-19 hit.

After a car accident in 2004, then 25-year-old Lacey Weaver—a Massillon, Ohio, native—experienced this firsthand. She started suffering severe back pain and went to the hospital three times, but doctors ran no diagnostic tests. Instead, they gave her a shot to help handle the pain and told her to lose weight. “They were so callous,” Weaver tells Bitch. “I could tell they thought I was a lazy, fat welfare queen. If you’re big and poor, they don’t think ‘maybe she has a bad thyroid or shitty genes.’ They imagine you sitting at home, binging on food, and not working.” More than a year after the accident, Weaver woke up unable to feel her legs and was rushed to the hospital. She had emergency surgery for a ruptured disc that had blown shards through her nerves. Luckily, the operation saved her ability to walk, but the rupture could’ve been prevented if doctors had taken her complaints more seriously. The same disc herniated a decade later, but the surgeon said he wouldn’t operate again until she lost weight.

Weaver’s experiences encapsulate the danger of fatphobic discrimination in medicine. Doctors began treating Weaver a bit better when she moved from state-sponsored Medicaid to her husband’s private insurance (“Doctors still tell me I’m fat but they say it in a nicer way”). But the fact remains that when weight stigma is coupled with other oppressions like classism, racism, or misogyny, fat people are at an even greater risk for medical neglect. A 2012 article published in PLoS ONE cites a study that found more than 50 percent of primary care physicians view fat patients as “awkward, unattractive, and noncompliant.” Of these physicians, over a third characterized fat patients as “weakwilled, sloppy, and lazy.” The article also cites research whose results were sobering: “Forty-five percent of a sample of physicians agreed that they have a negative reaction to obese individuals.”

Some doctors not only have an aversion to patients of size, but they assume a fat body is inherently a sick body; this mode of thinking encourages health professionals to overlook symptoms of disease, not offer treatment, and focus solely on ridding the body of fat. For example, a 2015 study of medical students found they were nearly four times more likely to prescribe medication to thin patients than to fat patients, though both groups had the same symptoms. The supposed relationship between fatness and health concerns likely exists due to widespread weight bias. Psychologist Dr. Deb Burgard’s article “What Is Health at Every Size?,” published in the 2009 anthology The Fat Studies Reader, outlines the flaws in “obesity” research: “The studies that show correlations between higher BMI and ill health fail to control for important variables known to mediate this relationship, including [socioeconomic status], physical activity levels, nutritional quality, sleep quality, access to quality medical care, exposure to weight-based stigma, or even trying to lose weight (weight cycling).”

Though our culture uses the phrase “obesity epidemic” ad nauseam, fatness never infected communities and killed with impunity. Unlike COVID-19, hospitals didn’t flood with fatness victims; harried doctors forced to triage. In Anti-Diet, Harrison explains that BMI guidelines were lowered in the late ’90s, suddenly throwing millions into “overweight” and “obese” categories. As a result, Centers for Disease Control and Prevention researcher William Dietz tried to convince his colleagues that an obesity epidemic was sweeping the nation. They were not persuaded. After all, the flu, Ebola, and HIV were epidemics, but fatness? No way. Dietz then presented a series of chilling maps that dramatically shifted from light blue (low rates of “obesity”) to siren-red (high rates). Somehow, this manipulative presentation worked. Dietz had sounded the fatness alarm, creating the “obesity epidemic.” This proved to be one of the most lucrative inventions of our time, with the dieting industry becoming a multibillion-dollar business. 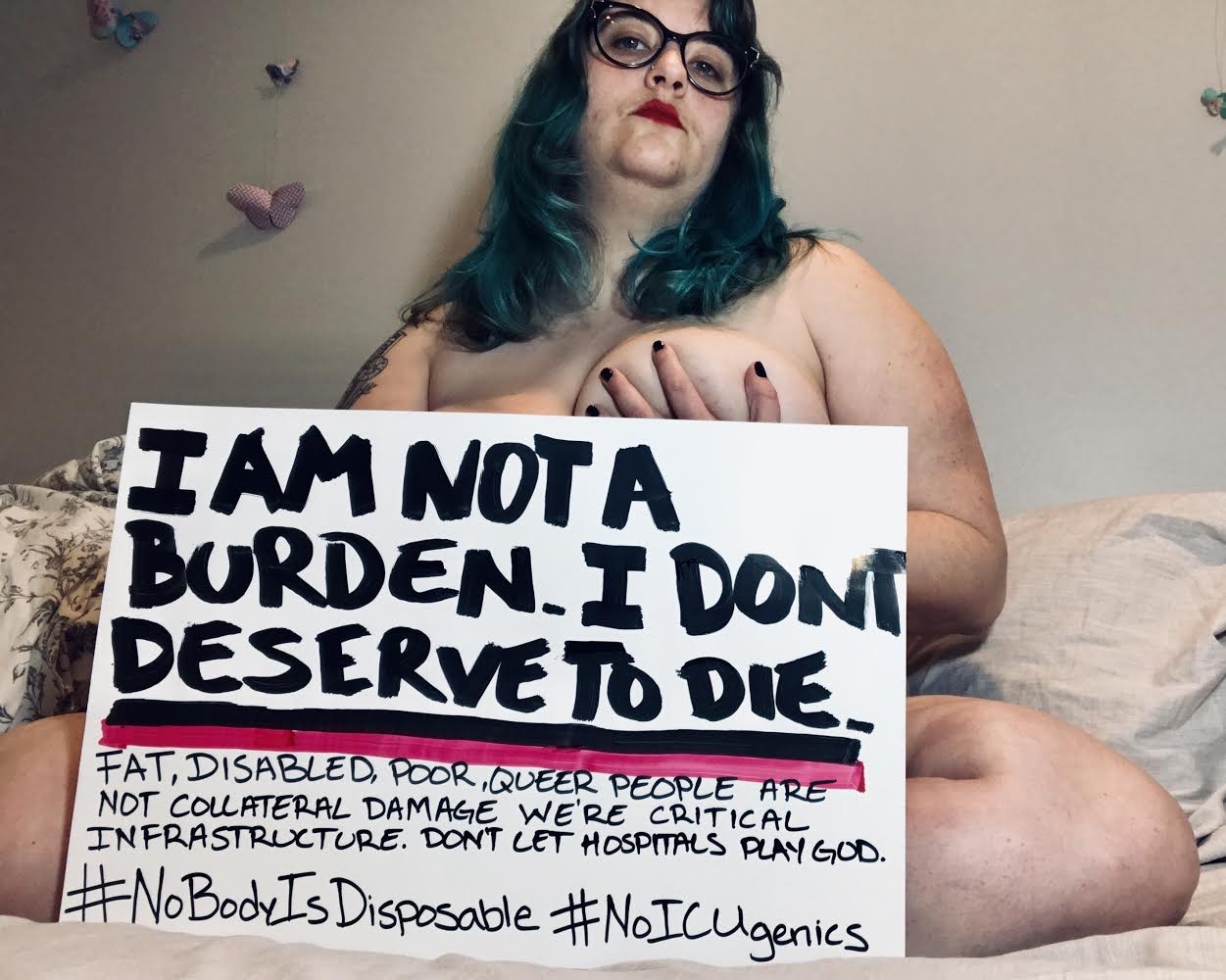 Jessica Joneson is an organizer with Fat Rose, a fat liberation group that started #NoBodyIsDisposable to protest ICE detention centers. In March 2020, Fat Rose revived the hashtag and coupled it with #NoICUgenics to raise awareness about COVID-19 triaging that puts those in marginalized bodies at great risk. Joneson posted this photo on March 30. (Photo credit: Courtesy of Jessica Joneson)

The medical system is the locus for fat people’s oppression. Health is weaponized against fat people: The gospel of fatphobia says you’re unhealthy and it’s your fault, so you don’t deserve care and compassion. There’s an ingrained cultural myth that links wellness to goodness, so what’s perceived as poor health—fatness, chronic illness, or disability—is a result of poor choices and thus poor character. Health, however, is not a moral imperative. Everyone deserves equitable medical care. Sociologist Sabrina Strings’s 2019 book, Fearing the Black Body: The Racial Origins of Fat Phobia, unearths how race became an integral part of an equation, where whiteness equals thinness and morality, while Blackness equals fatness and immorality.

In a 2019 article for the From the Square blog, Strings explains that fatphobia came from 18th-century race scientists who “invented new ways to identify a person’s race. They thought Black people were more animalistic than white people. That they lacked self-control, discipline, or rationality. Ergo, so the (pseudo)science went, they are fond of sex, alcohol, and food. This, they claimed, made Black people unacceptably fat.” This warped, insidious thinking was then used to justify widespread racial terror in the United States. Today, articles like the one from Reuters that falsely claims “obesity” is leading to higher COVID-19 death rates in Louisiana—a state where 70 percent of those dying from COVID-19 are Black, though African Americans only account for 33 percent of the population—evoke a racial code that dates back centuries.

Blaming “obesity” obscures the structural oppression and medical marginalization Black people face and locates the cause of disease in the body rather than in our racist society—setting the stage for victim-blaming. The Health at Every Size movement, created by health practitioners shortly after the obesity epidemic’s invention, seeks to free us from fatphobia—a bias rooted in anti-Black racism that has harmed countless people. The movement asks healthcare providers to treat fat patients with the same care they treat thin patients. Asking that people of size be treated as human sounds radical to many, which reveals how ubiquitous the dehumanization of fat people is. With the COVID-19 pandemic triggering a resurgence in fatphobic discourse, and with the likelihood that triage procedures will lead to people in marginalized bodies being left to die, it’s more important now than ever to fight for fat liberation—at all costs.

Read this Next: Off the Scale 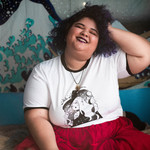 by Samantha Puc
In order to continue creating more authentic stories about fat people, more fat creators must be hired in writer’s rooms, granted book deals, and tapped by Hollywood to adapt their stories. 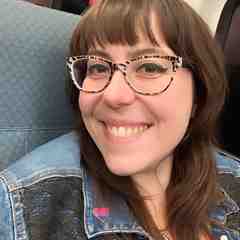