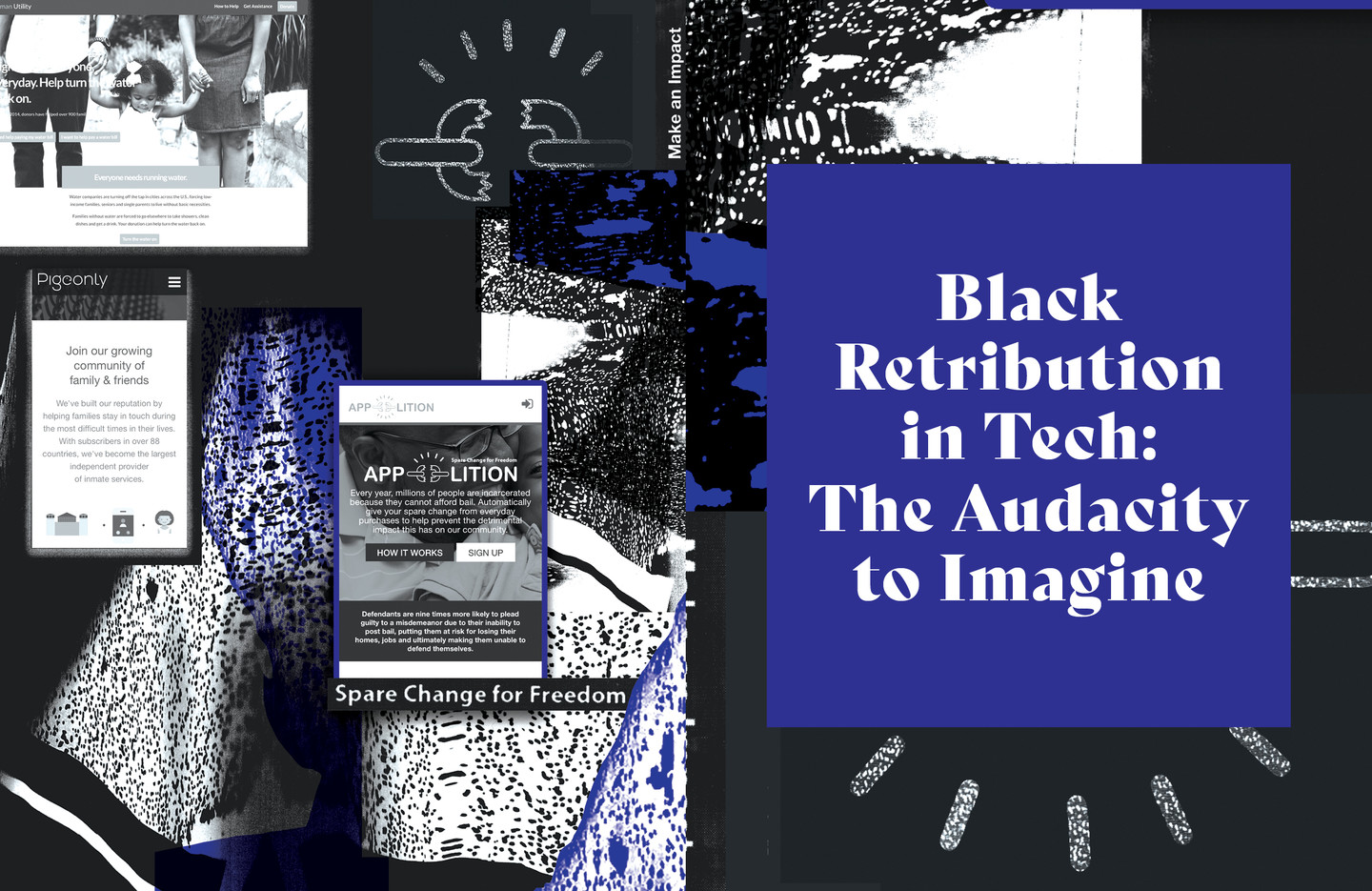 I’m a fighter. I believe in the eye-for-an-eye business. I’m no cheek turner. I got no respect for a man who won’t hit back. You kill my dog, you better hide your cat.  —Muhammad Ali

As a tech entrepreneur for the past four years, I have cultivated a special relationship with revenge—one that is built on the idea that I and other Black people deserve acknowledgment as creative individuals and equitable access to tools that can nurture our gifts. I have carried this notion with me in the often exciting but always lonely space of Silicon Valley, and have found solace and comfort in the noble idea that you can change the world with code. But it is within those same idealistic walls that I have had to operate within the margins. Spaces that are designed to support white ingenuity ultimately place limitations on Black creativity and expression. While millions of dollars are funneled into ideas that trivialize the lived experiences of people of color, companies peddling “innovation” generate billions from our labor. Still, in an industry rife with racially exclusionary practices, I remain convinced that it is on the fringes—the sites that others refuse to touch—that I am able to thrive.

Being a Black American, the concept of revenge is born into my body. I’m part of a legacy of folks whose very survival has meant a constant crafting of a careful revenge, one that punches back against the ideologies and systems that routinely deny our humanity. Our revenge lies in the sounds of the languages we speak with mastery that deflect silence. Its presence fills the words we read and lingers in the words we write to tell our stories. It’s there in the equations we solve on our path of invention and reveals itself in the blueprints, sketches, and designs of our mind. For Black Americans, retribution, in its simplest terms, is our audacity to imagine.

I entered the tech industry at a critical moment in my life. I had spent two years post-PhD struggling to secure employment and being rejected at every turn. At the time, I attributed my inability to find a job to a declining market for newly minted doctorates, but encountered many professional roadblocks that were undoubtedly grounded in racial bias and anti-trans agendas. The more jobs I applied to, the more it became clear that my diverse academic and artistic portfolio didn’t matter to potential employers, whose lack of understanding of the trans community overshadowed any hope of working together. One potential employer, for example, told me that they didn’t cover transgender healthcare so it wouldn’t be a great fit for me. (I later learned this wasn’t true.) Feeling defeated, and on the verge of losing my home because I could no longer afford rent, I looked toward the tech industry for hope. While I wasn’t interested in becoming part of the tech workforce, I did see an opportunity to carve out a safe space for transgender people—a group that had long been ignored in growing “diversity” conversations, whose ideas about gender still center cisgender women.

I did not know anyone in tech, so I relied on my research skills to seek out potential supporters in and outside of the industry who would uplift a trans-centered tech product. I found significant support from transgender leaders like Janet Mock and Monica Roberts, who believed in my ability to galvanize trans advocacy within the tech industry. Having them on board was crucial to ensuring transgender people who wanted to support my work felt safe and knew they would be heard. Elsewhere, companies such as Mozilla were some of the first to reach out and offer financial and in-kind sponsorship, or vital noncash support, which ultimately afforded me tech-world legitimacy and opened doors to other organizations that believed in the mission.

Finding community support wasn’t difficult because others also saw the need for a more gender-inclusive space in tech. But I discovered that, though trans people were leading some of the most exciting projects at some of the most powerful companies, there was no central organization to support this community or our ideas. People such as scientist Vivienne Ming, who was named one of 10 Women to Watch in Tech by Inc. in 2013, were helping to shift trans representation in technology, but didn’t extend to the larger transgender community. Many trans people who looked to tech as a potential career path didn’t see themselves reflected, and didn’t know there were other brilliant out-and-proud trans people leading the industry.

Many trans people that looked toward tech as a potential career path didn’t see themselves reflected and didn’t know there were other out and proud brilliant trans people leading the industry.

This propelled me to launch Trans*H4CK, the first tech organization for the transgender community, in October 2013. I knew I wanted to create a space that would become the bridge between transgender advocacy and tech-based solutions to empower the community and address some of our most pressing socioeconomic issues. Having suffered unemployment, trans discrimination, and poverty myself, I understood that such an organization needed to champion empathy and be intentional, rather than default to the paternalism of other such organizations.

What started as a small hackathon—with 40 participants coming together to collectively build technologies specifically for the trans community—has become a catalyst for transgender visibility and inclusion in the tech industry. Trans*H4CK has produced lifesaving and sustaining technologies and provided employment, support, and inspiration for thousands of trans and gender-nonconforming people. One of our important contributions was a survey that sampled 10,000 tech-industry workers and offered groundbreaking insight into the number of people who identify as trans or gender nonconforming, and their salaries and roles within the industry. The survey provided data for companies that they could use to design trans-inclusive policies, and data the trans community could use to negotiate with employers.

A year after launching Trans*H4CK, I met my partner in genius, Tiffany Mikell. At the time, she was fresh from helping to found a popular code bootcamp, and she co-organized a Trans*H4CK event with me in Chicago. We quickly realized we held a similar vision of a place in the tech industry where Blackness and brilliance could be celebrated. Our connection propelled us to cultivate a socially driven company that solves problems while generating revenue.

We ran through multiple ideas, ranging from a t-shirt company to an all-Black short-film streaming platform, and closely followed the startup methodologies of leading tech entrepreneurs—most of them white men. Their tools were useful, but there were few examples of high-growth companies that featured founders of color, and no on-site spaces where we could get meaningful business education from people who looked like us. We knew it was possible to change this by creating an inclusive business model with multiple beneficiaries, and settled on a virtual learning platform where emerging founders of color across the technology ecosystem could access live and recorded interactive seminars to help them grow their startups from other successful founders of color.

Although our hopes were high, like most startups, we had a difficult time finding our footing and eventually pivoted away from content delivery to focus on software development. Despite having to “sunset” (tech jargon for terminating a project), the BlackStarLaunch platform remains part of a history of Black-created technology whose reimagining of the world centers the people Silicon Valley so often chooses to exclude.

I see this project as my reclamation and taking back of the concepts of innovation and creating a new possibility for technology that centers and actually considers Black life.

Others have succeeded in building platforms that provide a direct impact for the vulnerable people that food-delivery or ride-share platforms often abuse. The Human Utility, for example, has helped hundreds of low-income Detroit residents by giving them access to water—a right that we all deserve. Or Pigeonly, a tool that helps incarcerated individuals communicate more affordably with family members. Even the travel industry now has Innclusive, an alternative to Airbnb for travelers of color who need safe and inclusive lodging. Over the past five years, these tools and others have ushered in a new model of innovation that benefits Black lives in Silicon Valley and beyond. They have proven that tech-enabled tools can center marginalized individuals and also bring awareness to the disparate social ills that plague many techs users and founders.

As I write this essay, I’m feverishly checking the dashboard of our new tool, Appolition, a web app that collects the spare change of its users and sends it to a national fund that bails out people charged with misdemeanors. In July, after being inspired by National Bail Out’s recent campaign to bail out Black mothers, I asked folks on Twitter if they would support such a tool for those who couldn’t afford bail. The response was an overwhelming yes. Thousands of people chimed in from all professional and creative corners to offer code help as well as legal and financial support for the project. Some even asked why a technology hasn’t focused on this issue yet.

Taking advantage of the momentum from the outpouring of support, we spent four months building a team to develop and launch Appolition and finding a strategic bail fund to partner with. Within three weeks of our launch in November 2017, we had onboarded thousands of users in a united effort to combat one aspect of the prison-industrial complex and allow low-income folks the opportunity to take advantage of the cornerstone of our justice system—the ability to be seen as innocent until and if proven guilty.

I have just refreshed the dashboard again. The user count has risen by a few hundred, and we have collected enough change to bail out at least one more person. I see this project as my reclamation of the concepts of innovation, creating a new possibility for technology that centers and actually considers Black life.

Perhaps revenge can save us all. 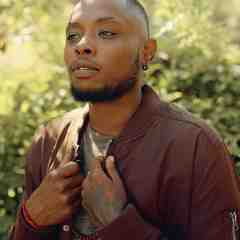 Kortney Ziegler is an award-winning entrepreneur, scholar, and artist. He lives in Oakland with his best friend and doggy companion, Dough.

The Physics of Melanin

When TV Dramas Give Colonialism a Glamorous Feel