Ms. Monopoly Is a Woman Who Has It All—but Most Women Don’t | Bitch Media

What Ms. Monopoly Shows about Our Cultural Unwillingness to Understand the Pay Gap 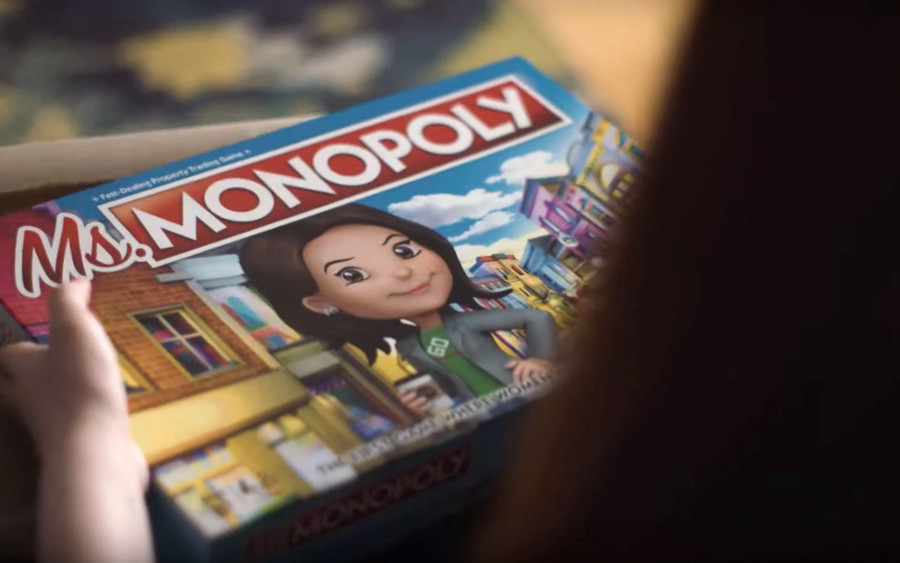 Recently, Hasbro announced Ms. Monopoly, a supposedly feminist take on the original Monopoly that purports itself to be “the first game where women make more than men.” The press release stated, “While Mr. Monopoly is a real-estate mogul, Ms. Monopoly is an advocate whose mission is to invest in female entrepreneurs.” And just in case you worried about excluding men, Hasbro has it covered: “But don’t worry, if men play their cards right, they can make more money too.” The messaging, the tagline, and Hasbro jumping the gun on comforting men reveals the game’s failure before its even officially hit the market.

The game’s most obvious shift is clearly visible: Instead of Mr. Monopoly a.k.a. Rich Uncle Pennybags being on the box and board, Ms. Monopoly is the face of this particular version of the game. “Ms.” is written in a girlish cursive (because we wouldn’t know she’s a woman unless her name has a more feminine font, right?) and she’s standing in a power pose—one hand on her hip, her head cocked to the side, with her eyebrows sharp. Ms. Monopoly is holding her coffee in a to-go cup (because she’s a busy, modern woman), and her blazer, light pink lipstick, and perfect winged eyeliner is something straight out of a “how to land your dream job” guidebook. In the background, the usual Monopoly man stands on the sidewalk with his eyes on his replacement. Thanks to Ms. Monopoly, women will start the game with more money than male players, and they get to collect $240 from the bank when they pass go instead of the usual $200.

There’s also an educational component to the game: Instead of collecting properties and raising the rent to beat your opponents, Ms. Monopoly lets players collect women-created inventions, including “WiFi (invented by Hedy Lamarr in the 1940s) and chocolate chip cookies (created by Ruth Graves Wakefield in the 1930s).” Additionally, Hasbro donated a total of $20,850 to three teenage entrepreneurs, the same amount of money used in the game. All of these initiatives are great, but none of them are enough to save the game or inject it with feminist credibility

It’s not just that Monopoly is gross capitalism made fun or that Monopoly ripped off another game created by a woman. It’s that Ms. Monopoly mirrors our cultural ignorance about the origins and the persistence of the wage gap. Conservative women, including children’s author Lisa Britton, are already saying that the game “perpetuates victimhood” because the “pay gap comes from personal choices made by women.” Similarly, Kim Elsessor, a senior contributor at Forbes, argued that “the goal should be equality—not putting women on a pedestal.” “Women don’t want to earn more than men, that doesn’t sound fair or even particularly fun in a board game,” she continued. These women are upset with Ms. Monopoly because they fault women—not rampant inequality—for the wage gap.

As we know though, the wage gap can’t be solved through “leaning in.” A 2018 Harvard Business Review study found that women don’t ask for raises less often than men, but they’re less likely to get them. And women, especially women of color, are penalized for daring to ask for more money: Black women who request raises are perceived as “aggressive” while Latinx women are considered “feisty.” We’re more inclined to encourage women to apply for programs at school or work that make them more marketable than understand the ways they suffer in workplaces from microaggressions, harassment, exclusion, or other forms of violence.

If we want to boost women in the workplace, that would include providing more support to trans women, who are routinely excluded from the workplace (more than one in four trans people have lost a job due to bias); undocumented women, who are at risk of deportation if they dare ask for better working conditions; and America’s overall culture of work in 2019, including unpaid internships impacting women’s ability to progress in their careers.

In a statement, Jen Boswinkel, senior director of global brand strategy and marketing at Hasbro said, “We want to recognize and celebrate the many contributions women have made to our society and continue to make on a daily basis.” It’s a worthy cause: games, and pop culture in general, could stand to better acknowledge the work of women. But, despite good intent, a presumably white woman in heels doing a weird power pose on a board game about capitalism isn’t inspiring. Instead, the image is just another insulting way for brands to profit off of the idea that women just need to try harder to “win” at work. We can try as hard as we’d like, but if we’re punished every step of the way, at a certain point it’s not about what we are or aren’t doing: It’s about the very structures that exist to make success, on and off of the board, impossible.