Sean Spicer at the Emmys was the worst | Bitch Media

Howard was dropping all his cat treats this morning! I had a bowl of Honey Nut Cheerios.

What is going on at Harvard? They recently welcomed disgraced former-Trump campaign manager Corey Lewandowski and disgraced former-Trump Press Secretary Sean Spicer as visiting fellows, but rescinded their invitation to Chelsea Manning. Harvard’s history department wanted to admit Michelle Jones, a Ph.D. applicant released from prison, but the administration refused to admit her.

Jeff Sessions was in Portland yesterday spreading his “chiding message of despair.” A fifth-grade teacher in South Carolina asked her students to explain the KKK’s perspective. Senior White House adviser Ivanka Trump is repeating her claim that her job is not to moderate or influence her father. Sorry, so what is your job?

Sean Spicer had a cameo during this year’s Emmy Awards AND I NEVER WANT TO SEE ANYONE PRETEND LIKE SEAN SPICER IS A FUN, NICE GUY EVER AGAIN. Also, I saw Mother! and it was not great.

Howard was a good boy this week and has been re-promoted to senior cat correspondent. Congrats, Howard!

Catch the next episode of Feminist Snack Break on Wednesday at 10 a.m. PST/1 p.m. EST! 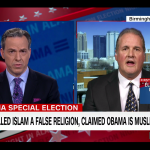 by Dahlia Balcazar
RIP Roy Moore's terrible campaign spokespeople. We won't miss you at all.