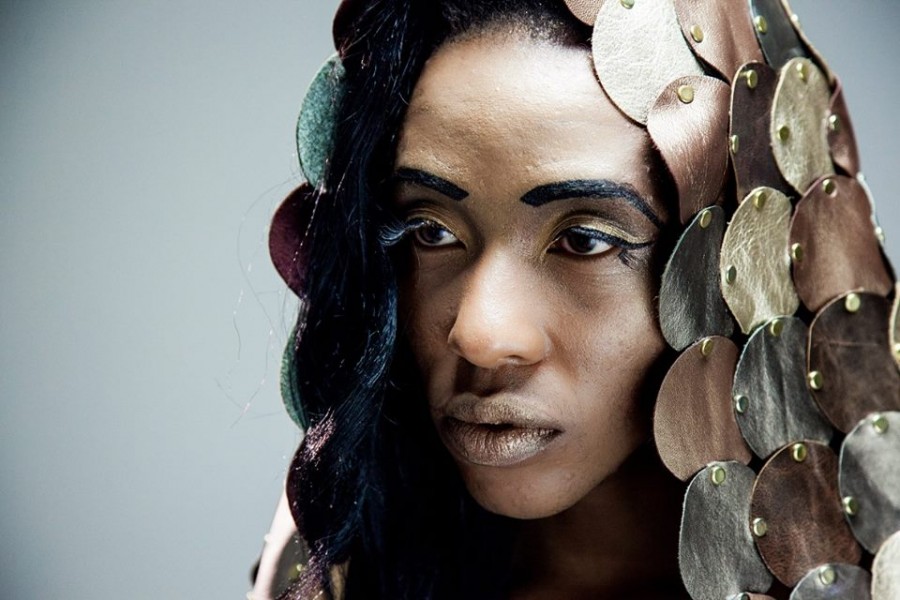 “What is my life if I am not visible? Contrary to what homosexual rhetoric suggests, my queerness and my radical femininity are not just retractable features of a grander being, who can comfortably exist in a cis-heteronormative society. These are not secrets that only expose themselves in who I “choose” to love, in the privacy of my own space, no. My feminine queerness is all of my identity, it lives in every part of my body and it will manifest through my gestures, my behaviour, my walk, my thoughts, the way I dress and all the things that make me visible as who I truly am. These are not tricks. Even my chandelier earrings do not serve a decorative purpose. They make me me.”
—Desire Marea of FAKA, South African gender non-conforming performance artist, writer and speaker

On the first Saturday of 2017, people from all over Johannesburg gathered at Industry, the city’s newest queer venue. At a buzzing, trendy address in the city’s heart, we gathered on the venue’s top floor for the latest chapter of Queer Art Night, Industry’s ongoing series of events that seeks to showcase and support queer artists while building community.

The theme for the January event was “Femme In Public,” and was headlined by Alok Vaid-Menon of New York–based performance-poetry dup Dark Matter. As Vaid-Menon captivated the audience with brutal honesty, acerbic social criticism, and razor-sharp poetry that excavated the violence of navigating the gender binary as a South Asian, nonbinary trans femme, I sat huddled in the corner beside one of my best high-femme friends, oscillating between uncomfortable silence and enthusiastic exclamations.

However, for me the most powerful and impactful parts of the evening were the performances and provocations presented by South African femme dancers, performance artists, and vocalists. There was Tazme Pillay, a dancer and curator from Durban, who opened the evening with a profoundly vulnerable performance that explored the consumption of queer bodies of color using symbolic representations of food—all set to a voiceover of a woman reading the ingredients of an unknown recipe aloud.

Then there was Llewllyn Mnguni, a.k.a. “Lulubelle,” a choreographer, teacher, and dancer from Mahikeng, whose electrifying dance performance blended iconic queer dance forms such as vogueing with local street-dance moves popularized in uniquely South African genres such as kwaito and gqom.

Siya Ngcobo, a.k.a. “Umlilo” [pictured above], a musician, producer, writer, and performer who also doubles as South Africa’s “kwaai diva” performed powerful and fiery electronic songs exploring revolution, gender fluidity, social amnesia, and millennial voyeurism. And Kieron Jina—a celebrated performance artist and choreographer from Durban, and the founder of Queer Art Night—emceed the evening, which was capped off by perfect, finger-on-the-pulse DJ-ing by Fela Gucci, one half of FAKA, the celebrated South African gender non-conforming performance-art duo.

Each of these performers, musicians, speakers, and dancers challenged and extended my understanding of femininity by displaying each of their unique connections with femme-ness and femininity in all of its multidimensional glory. By embodying the struggle, power, and expansiveness of femininity, the artists push back against dominant racist and patriarchal discourses that frame femininity as something that only exists in relation to cisgender women—and, within that context, something that only exists to be either desired, manipulated, or destroyed. In seeking to delve deeper into their particular relationships to radical femininity, I interviewed Kieron Jina and Siya Ngcobo about the meaning and the magic of “femme.” 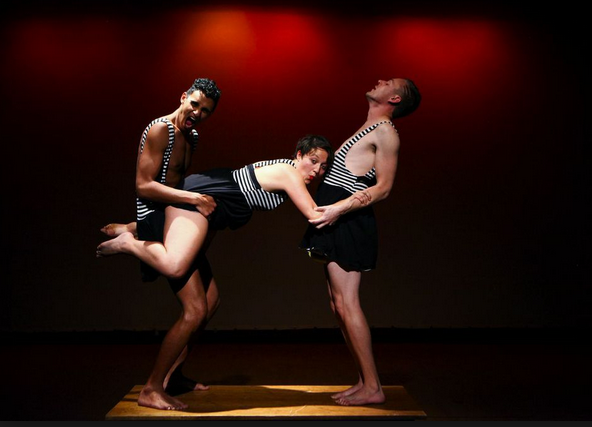 MM: What was your thinking around founding Queer Art Night?

KJ: There are very few spaces in [Johannesburg] for queer people to have conversations, create a community, and see work that deals with subject matter that they can identify. The event has been running for the past five months, and I’ve had the privilege of meeting the most amazing local artists and bridging the various gaps between local artists. Also, we’re learning to engage audiences in how to respect and deal with and react to work that is not yet conversational in spaces like Johannesburg.

What motivated [you to] engage with international artists like Alok Vaid-Manon?

I engage with international platforms around the Black body and people of color to highlight how we’re connected. We’ve been taught to segregate ourselves through these various binaries and classifications, [and] I think we need to do away, somewhat, with them. This is why it was so important for us to bring Alok, so that we don’t think of ourselves as this separate entity at the bottom of Africa, but [as] part of a larger global conversation. But [it’s] also [about] how we as a youthful generation start addressing things that our parents could not articulate because they were fighting another kind of battle—which we are still fighting, just in a different way.

Completely, yes. What about the theme, “Femme in Public”? What were you hoping to achieve with that theme?

With #femmeinpublic, we really want to highlight the fact that we are free and should be able to present our bodies the way we choose—and also to say to others that we do not have to conform to the way that society adorns our bodies with prejudiced notions based on specific behavioural patterns and attire. Also, we wanted to deliberately push against the popular understanding that femme can only be a lesbian in the dichotomy where femme is the opposite of “butch” and only applies to women. Because as complex as this is, it’s just another binary.

I think there’s something beautiful in destruction. We are taught that destruction is so bad and harmful. We’ve been pacified by notions, such as religion, that dictate to us how we must have these norms and values [and] no one is given the opportunity to question them. And here we are in a space where we have the freedom to really build our own ideologies and imagine and re-imagine them. This is where we are.

What does “femme” mean to you?

Femme for me is about defiance in a world that has a heavily polluted focus on gender. The femme body is totally expressive in a world that is obsessed with restricting and policing any kind of feminine movement. I come from a very movement-based, dance-heavy background, and I’ve seen, when I conduct workshops, how people restrict themselves to walking in a specific manner. It’s so rare for femmes to be given the space to pay attention to the movement of our bodies and feel the liberation of our spines. We’re strangers to our bodies.

Femme in my body feels like a breath of fresh air, or an “aha!” moment [of realizing] that it’s okay to be just who you are. Femme is confidence of self. 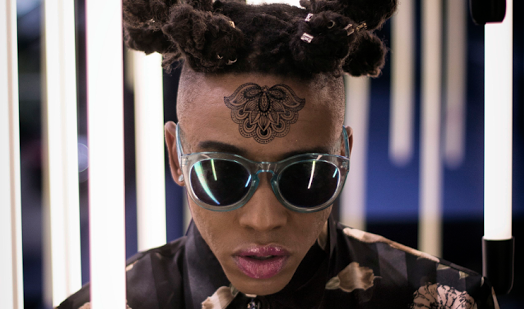 MM: I imagine that it can be immensely difficult to be a gender-defying artist in South Africa. What has been one of the most important lessons for you so far?

SN: It took me a long time to learn how to say no and to turn away from what didn’t work for me. Saying “no” as a femme makes you vulnerable, because you’re often characterized as being “such a diva!”—which is directly linked to misogyny. Thank god I adopted “kwaai diva” as part of my persona: I turned it around for my own good. The connotations of “diva” are negative only because women and femmes have to be much stronger than men; they’ve had to fight for what they have. So for me, being a diva is part of that legacy. In South Africa, we live in a time where people take art for granted; they don’t see how much work is really involved in being an artist.

A femme saying “no” is such a powerful act because it exposes and pushes against the entitlement many feel to our bodies and our work. Where do you think our generation’s power and our struggle lies?

In South Africa, when we look at the LGBTQIA+ leaders of the past, the emphasis of their struggle was on coming out, on visibility. Today, we seem to have forgotten that; we don’t know where we come from. I say this because when people see my femininity, I’m always asked: “Why do you dress like that? Why do you do that to your hair?” And there’s so many issues linked to that conversation: race, patriarchy, misogyny. People freak out about me being feminine.

Very often I say to South African men, “You come from a culture and continent where bodies have always been adorned. We’re so diverse. You’re so far from your own heritage. Dig into your own history, read a book! Find [out] what it means for us to adorn ourselves.”

Yes! We have such a rich history. For us, love and expression outside of heteronormativity didn’t arrive with the word “queer.”

So what does “femme” mean to you?

I was lucky to have a grandmother who saw me and said “I embrace you exactly as you are.” She has so much wisdom and so much knowledge—because, as a Black woman, she constantly had to deal with this reality. So femme for me is linked to courage. I’m courageous when I tell institutions that refuse to recognize my humanity to fuck off. Because when big brands bully femme artists, it’s linked to patriarchy, and we need to fight that.

Keep up with Queer Art Night and its featured performers on its Facebook page.

by Amy Lam
A white writer is dished out advice on cultural appropriation while wearing a tiny sombrero? Hmm...