As Hollywood Turns Its Eyes to Cuba, Will the Island Be More Than Just a Prop? | Bitch Media

As Hollywood Turns Its Eyes to Cuba, Will the Island Be More Than Just a Prop? 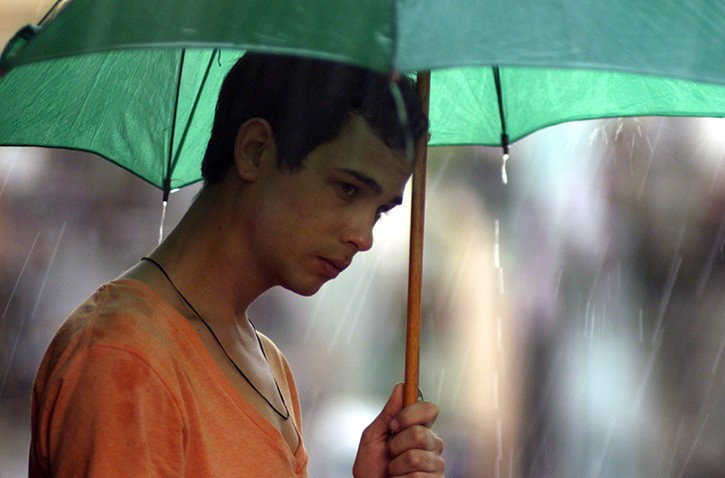 Cuba is quickly becoming a trendy playground for the rich and famous.

First came the president. In March, President Obama became the first U.S. president to visit the island in nearly nine decades. He met with Cuban President Raul Castro, promised that the embargo would end, and then took his family and Castro out to a ball game to watch the Cuban national team play the Tampa Bay Rays.

Then the fashion folks followed. Last week, Chanel hosted a private fashion show in a public park in Havana, which was attended by a long list of stars, including Chanel designer Karl Lagerfeld and supermodel Gisele Bundchen. The Kardashians also visited last week, likely shooting for their reality series, and caused a stir, especially when Khloe posed underneath a Fidel sign.

The nation is also seeing an influx of filmmakers. The eighth installment of the Fast and Furious series is shooting on the island, bringing in a big crew of millionaire stars to a country where the average wage is $17 a month and only 26 percent of the country’s residents have access to the internet. A big part of Cuba’s appeal for Hollywood crews is that it’s a location that will seem “exotic” to many American audiences. As John Kavulich, senior policy adviser to the U.S.-Cuba Trade and Economic Council, said bluntly, “Cuba is a land that many know about, but few have seen. These productions are hoping to capitalize on the increased interest in Cuba.” Fast and Furious has been heralded as “breaking incredible new ground” by shooting “where no other major motion picture has gone before.” 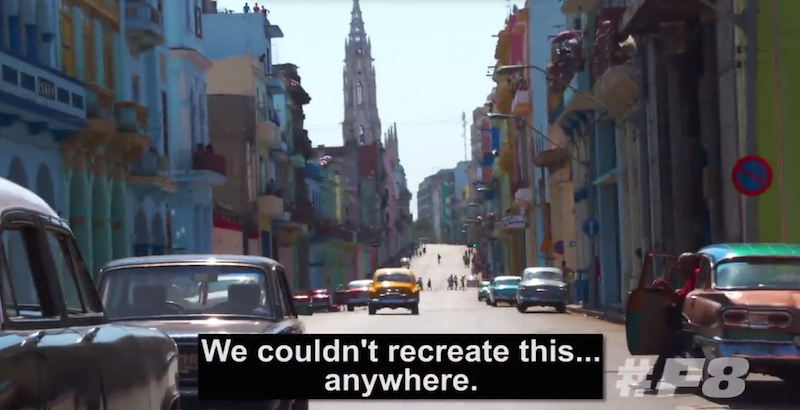 A still from a behind-the-scenes video of the Fast and Furious 8 filming in Cuba.

But, of course, what many Americans overlook is that Cubans have been making their own films on the island for decades. The trade embargo has severely curtailed distribution of Cuban films for the past 40 years, so Cuban voices have been largely missing from American cinemas, though some ground-breaking Cuban-made films like I Am Cuba (1964) and Lucía (1969) have gained acclaim around the world.

What this new influx of international film industries’ wealth and attention will mean for the country’s 11 million residents is unclear. Some speculate that the gap between the rich and poor has already begun to widen.

As Hollywood filmmakers descend on the island, it remains to be seen what stories will be told. Will they produce plotlines that give agency and voice to Cubans? Or will they treat the island and its people as a mere backdrop for formulaic, United States-centric narratives?

Viva is an example of a Cuban-centered story is getting great reviews. It’s an Irish film in that it was written and directed by Irish filmmakers. But the rest of the cast and crew are Cuban, and the plot focuses on Cuban characters. It’s currently in limited release across the United States, and was shortlisted for an Academy Award for Best Foreign Language Film this year. 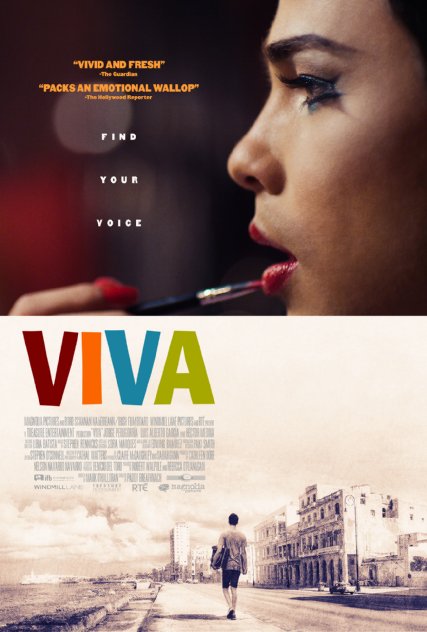 The movie tells the story of Jesus (Héctor Medina), a gay, 18-year-old hairdresser whose main clients are elderly ladies and Mama (Luis Alberto García), a manager of a drag troupe that performs in a local nightclub. Jesus fantasizes about performing the classic songs on the records that his late mother left him, wanting to experience the spotlight and bring in more money to make ends meet. When the opportunity arises, he auditions. Mama asks him his stage name, and he answers, “Viva,” which is the name of a fashion magazine he spots on a table next to him, and which also means “live.” Jesus’ performance career is cut short when his brutish, homophobic father returns home after 15 years and tells him drag is out of the question. What ensues is a beautiful and hard struggle about a young man who fights to be himself while refusing to give up on his father.

Viva’s director, Paddy Breathnach, says he sees the film as a joint Irish-Cuban effort. As he told Indiewire, “It’s a very Irish film to the extent that it has an Irish director, an Irish writer, it was an Irish idea, and it’s Irish financed. It was conceived in Ireland and a couple of other key creators are Irish as well. but I think the story is an important story in Cuban terms at the moment. The Cuban cast and the Cuban crew completely embrace it as theirs, see it as theirs, and celebrate it as theirs, so I would like to think that it’s a sort of marriage between the two.”

He and screenwriter Mark O’Halloran made several trips to the island to do research before filming began. The script was originally written in English and was then translated by Cuban actors and advisors. The language incorporates Cuban slang specific to the culture—and people tell each other off with flair (including grandmothers), and loved ones manage to show affection even with insults. The characters are poor, but their conditions are represented without either glamorizing or degrading them.

The underground economy of sex tourism is addressed smartly in the representations of both the Cubans and the foreigners. Young men, including Jesus, want to avoid participating in sex tourism but sometimes do anyway in order to earn money to buy food; tourists are the ones with money. Jesus has a friend who walks with a cane even though he doesn’t need to because foreigners pay more when they feel sorry for him. One of Jesus’ clients, Ray (played by screenwriter O’Halloran), speaks Spanish with a foreign accent and tells Jesus that he hopes he’ll do something with his life because he’s a “good boy.” But when Jesus asks if he can have $40 instead of $20, Ray says that he must respect the price that they agreed on, but maybe they can meet again. The scene reveals the power dynamic between tourists and locals as even a liberal visitor who sees himself as an ally to Cuban people takes advantage of their situation.

Cuba has long been both romanticized and demonized in the imaginations of the left and right in America. Viva manages to avoid both extremes, telling a moving story about ordinary Cuban people.

At the same time, a second film set is Cuba has landed in U.S. theaters, which warrants a thumbs down. Papa Hemingway in Cuba, the first American film shot in Cuba in over 60 years, employs a hero formula that focuses on white Americans, and Cubans and their island are accessories in the background. It tells the story of how Hemingway (Adrian Sparks) befriends young journalist Ed Myers (Giovanni Ribisi), who idolizes him. The film’s director, Bob Yari, calls it a “docu-drama, since it was written by the real-life Ed character, Denne Bart Petitclerc. 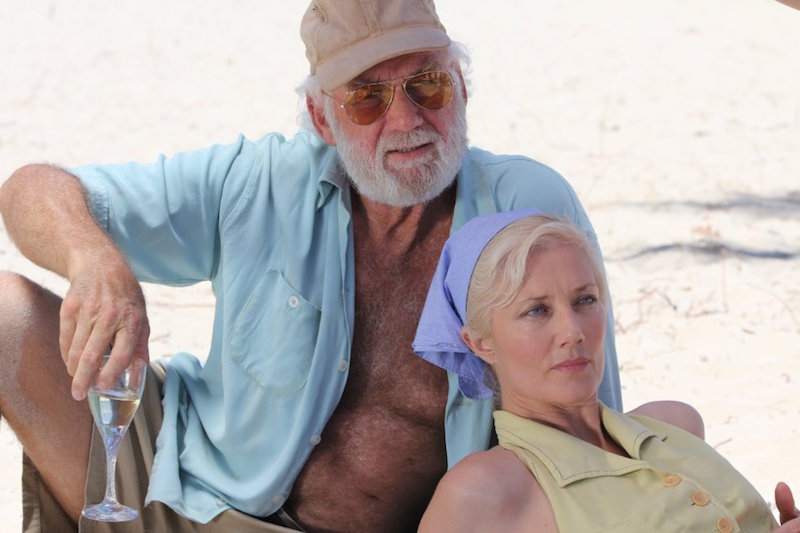 A still from Papa Hemingway in Cuba.

The film shows Hemingway as a hero through the eyes of the younger man who adores him and struggles to accept his flaws: Hemingway drinks too much, is a womanizer, faces writer's block and depression. The screenplay is more preoccupied with revealing what some may perceive as shocking facts about Hemingway—he helped run arms for the communists, for example—than with delivering a story with an arc. The camera often zooms in to show “authentic” props from the past, such as an old car radio or Ed’s carton of Camel cigarettes.

Papa was shot in the Hemingway museum in Havana and in other areas of the city, but really, it could have been made anywhere. The Cubans in the film rarely speak. For example, the cab driver offers a ride to Ed, but music swells and we just see them conversing; we can’t hear them at all. The Cubans who do have lines are singing and smiling, playing music in the background of restaurants and bars. They’re servants, and happy ones. The island is the wallpaper, the set on which the white Americans get to play. Not unusual for American films, albeit recycled and unoriginal.

What we really need as Cuba’s borders open is more Cuban-made films and Cuban-centric stories told by people who know them best. Although it was not shot in Cuba, the recent efforts on the small screen with Celia, honoring salsa queen Celia Cruz, is a good start. The Cuban blog Negra Cubana Tenía Que Ser has compiled a directory of Afro Cuban women, which would be a smart place for filmmakers to find inspiration. Instead of a biography of a womanizing American writer who spent time in Cuba, future films shot in Cuba should tell the life stories of people who have long been overlooked by the rest of the world, like Carlota or Teresa Cárdenas.

As more movies are filmed on the island, it would be great if the influx of filmmakers can lead to more support and resources for Cuban filmmakers. Will Cuban directors and writers find greater opportunities to tell their stories? Or will they wind up just working as crew on international projects? 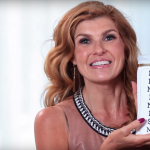 by Sarah Mirk
Actress Connie Britton stars in a satirical video for #AskHerMore, an effort to push reporters to ask actresses about more than just their looks.