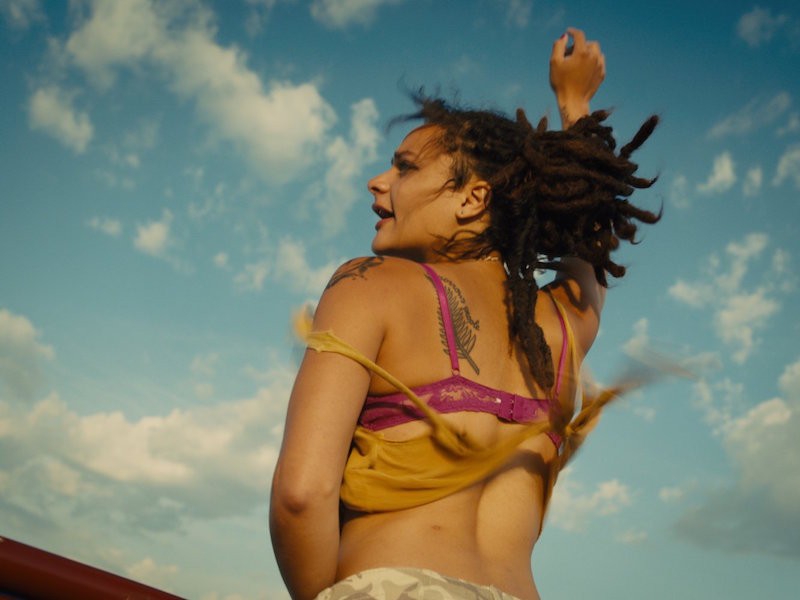 For her film American Honey, director Andrea Arnold used “street casting”—finding the cast among teenagers hanging out on beaches and in WalMart parking lots. Sasha Lane, above, was cast while on spring break in Florida.

There have been several smart depictions of broke people in pop culture, from the family in Roseanne in the ‘80s and ‘90s to the more recent Joyce Byers in Stranger Things. But there is still a rather significant void of more delicate, well-crafted depictions of poverty, ones that don’t use poor characters simply for inspiration porn to make wealthier audiences feel better about their lives. This relative lack makes sense given the current state of media. Television shows and films often depend upon sponsorships and product placements in order to afford production now. How do you shill name-brand potato chips through characters who can’t even afford the grocery store–brand knockoffs?

New film American Honey, however, is a completely gorgeous and remarkable film in this vein. Written and directed by Andrea Arnold, who has directed episodes of Transparent and who won an Academy Award for her short film Wasp in 2005, American Honey manages to depict the desperation of being a poor young person in a forgotten corner of America without condescending to or worshipping its destitute characters. 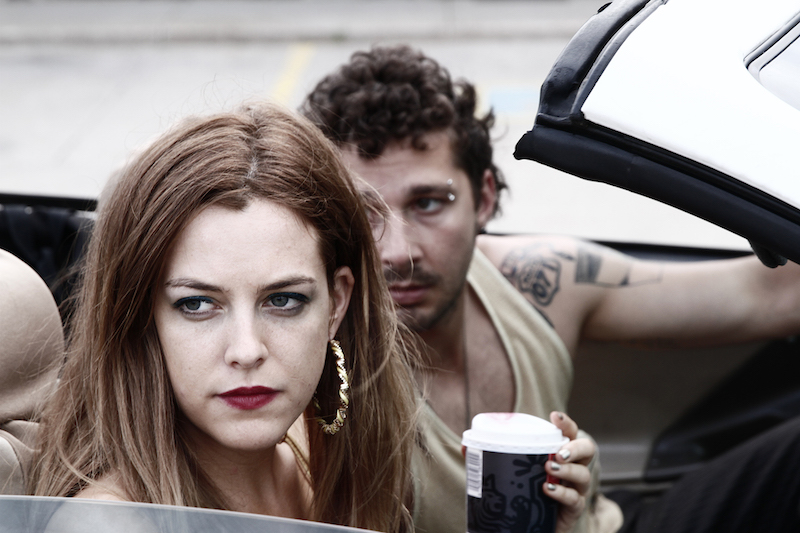 The film centers on Star (Sasha Lane), an 18-year-old girl living in rural Oklahoma. When we meet her, she’s Dumpster diving for dinner with her young step-siblings. They find a swollen, defrosted freezer chicken and consider the outing a success. When trying to get home, they attempt to hitchhike outside a Kmart, but then Star sees a rowdy young crew pile out of a white passenger van. Intrigued by one boy in particular, she follows them into the store.

It’s a Kmart you’d find anywhere: Coin-operated machines filled with colorful gumballs line the entryway. When she catches Jake’s (Shia LeBeouf) eye, Rihanna and Calvin Harris’s “We Found Love” begins playing—which, because of its iconic video directed by Melina Matsoukas, has become cultural shorthand for a kind of dusty, destructive, drug- and sex-fueled American youth. The crew go wild when the song plays, dancing atop the checkstands until they’re kicked out.

Outside the store, Jake asks Star to join them on their road trip. He says he can offer her a job and that she should meet them at the motel in the morning if she decides she’s coming. She knows nothing of this group, not even what their business entails, but she decides to go with them, leaving behind her drunken, sexually abusive stepfather. 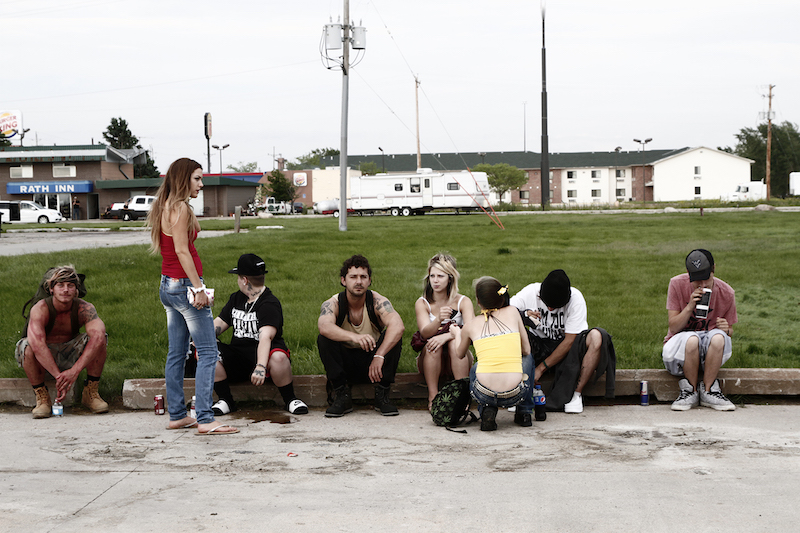 The group, Star quickly learns, travels and sells magazines, but really they’re selling exaggerated sob stories. One person says they tell potential customers their dad died in Afghanistan. “People love that patriotic shit.” Their customers want to feel better about themselves by helping poor, disadvantaged youth, and the kids prod that rich guilt to make their sales. Even when they’re in poorer areas, Krystal (Riley Keough), the leader of the operation, says to invoke pity. “These are just poor people like y’all. They’ll pity you ‘cause you’re just like them.”

Every member of the crew is young and penniless. They’re from all over the country, most from the South and poor, rural towns of Appalachia. When Star initially joins them, Krystal asks her if anyone will miss her. “Not really,” she answers. The implication is that Krystal has asked every prospective member this question and that they’ve all answered the same way. This is largely a story about white poverty—aside from Lane, who is the mixed-race daughter of a New Zealander mom and an African-American dad, the entire cast of the film is white. It’s hard to imagine the crew’s recklessness—especially their drug and alcohol use while driving—going unnoticed if the mag crew consisted of people of color. Driving safely while Black is dangerous enough in this country. But the film does succeed in highlighting a specific kind of poverty often found in the largely white, rural areas where many of the characters are from, the kinds of areas that are faced with rampant drug and alcohol abuse and that are bitter, the Atlantic argues, about their decline because their parents and their parents’ parents lived considerably more comfortably.

The magazine crew lives carelessly. They pass blunts in the car. One boy repeatedly pulls his dick out of his shorts to catch laughs. They fuck each other outdoors, up against the van or in stolen convertibles parked in empty fields. Krystal spends her majority cut of each sale on trappings of the white middle class, for them signs of wealth—Confederate-flag bikinis, Victoria’s Secret underwear. No one speaks of family or obligation outside the mag crew. The group’s only family, we’re to understand, is each other.

Star hates the lies the crew members use to sell, so she tells her own story and takes extreme personal risks to seal deals. Through her first sale, in which she goes home with three wealthy older men in white cowboy hats, we learn that her mom died a few years prior from meth use. Star is bullish and hates being told she can’t do something because she’s a girl; the men tell her “women can’t normally handle” mescal, and that provokes her to down it. When she’s intrigued by the worm in the bottle, the men bet her to eat it, and ultimately, this is how she, alone, sells her first copies.

Her risk-taking gets more and more extreme as the film goes on. She rarely considers her own safety; she wants to make money, but she wants to do so by connecting with people, so she blindly trusts strangers who could very easily hurt her. It’s a bleak reminder that she’s entirely alone and has no one looking out for her, not really.

Many of the actors in the film—including Lane, who is breathtaking in the lead role—had never acted before this film. Arnold looked for her cast like newly minted adults might look for summertime flings: at parties, congregating at backroads motels, sitting in the back of strip clubs. Arnold found Lane, who is 19, on a Miami beach during spring break. Lane was a student taking classes in psychology and social work, but Arnold asked her to take time off to audition for the film and wound up casting her a week later. “I went on that trip because something felt like it was missing and I was just so lost and kind of hopeless, but I had a feeling,” Lane told IndieWire.

Though, of course, he’s better known than the rest of the cast, LaBeouf is also fantastic as Jake, whose flirtatiousness and regard for Star often turns dangerous, alluding to the fact that not all problems can be erased just by leaving a troubled family life behind. And the film is downright gorgeous to look at thanks to sun-bleached cinematography and attention to small details. The camera lingers on stale, ant-covered fries on a kitchen counter, on colorful tattoos peeking out of ratty, threadbare cotton short-shorts, and on Krystal’s twitchy fingers.

Later in the film, a truck driver asks Star what her dream is, and she says it’s the first time she’s ever been asked the question. “My own trailer,” she says after giving it some thought, “with lots of trees—real big ones.” When she asks Jake the same question, he gives the same answer: “No one has ever asked me that before.” This version of America is often left out of our mainstream pop culture, but it’s no less real than the high-rises on our glittery coasts.