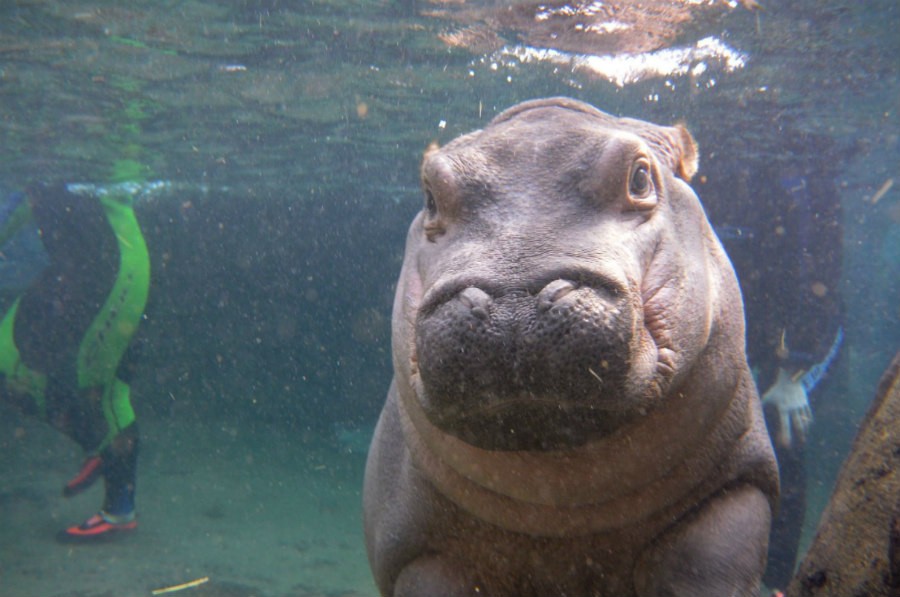 Losing an animal has brought me to tears before. When my dad called to say our family’s handsome 7-year-old dog, DJ, crossed the rainbow bridge, I cried so hard that I needed lozenges to ease the rawness of my throat. When I found my vocal parakeet Sunshine dead from a misdiagnosed upper respiratory infection, I couldn’t discard of him, so I draped a soft blanket over his cage, retreated to my room, and cried until my parents came home to bury him. Ordinarily, this uncontrollable outpouring of emotion—rooted in the knowledge that I’d never see my companions again—is reserved for animals I have an intimate, loving relationship with. When Henry the Hippo died, however, the waves of grief crashed into me, making it impossible to concentrate on anything but his lack of presence on Earth and his greatest gift—Fiona.

I’d never met Henry or visited the Cincinnati Zoo where he was housed. Yet when the zoo announced on Twitter that their “beloved Henry” died, my tears quickly pooled into puddles. I hurt for Henry. I hurt for his lifelong confinement in a zoo. More deeply though, I hurt for Queen Fiona, the little hippo that could. Just 10 months into her life, she’s fatherless, left to wade without the guidance and protection of Henry. I wondered if she’d realize her father was gone and develop a longing for his presence. I wondered if she’d jump from the bottom of the pool to the top—hippos don’t swim—in search of her dad. I wondered if she’d be joyous the next time zookeepers decide it’s warm enough to open the hippo exhibit to the public—it must be 50 degrees to do so and it’s cold in the Midwest around this time of year. I wondered if she’d grieve.

There’s a misguided assumption that animals are soulless. They’re simply here to nourish us with their flesh and their companionship, but we assume they don’t feel or think or understand the endless cruelty of humans. Pet owners who love their animals know differently—but I don’t know Fiona. These are odd thoughts to have for an animal who has no idea I exist, but it’s quite ordinary for those who are fixated on the hippo who survived. This intense fascination, obsession, and emotional investment in hippos is a new phenomenon, inarguably ushered in by social media’s reigning animal icon. 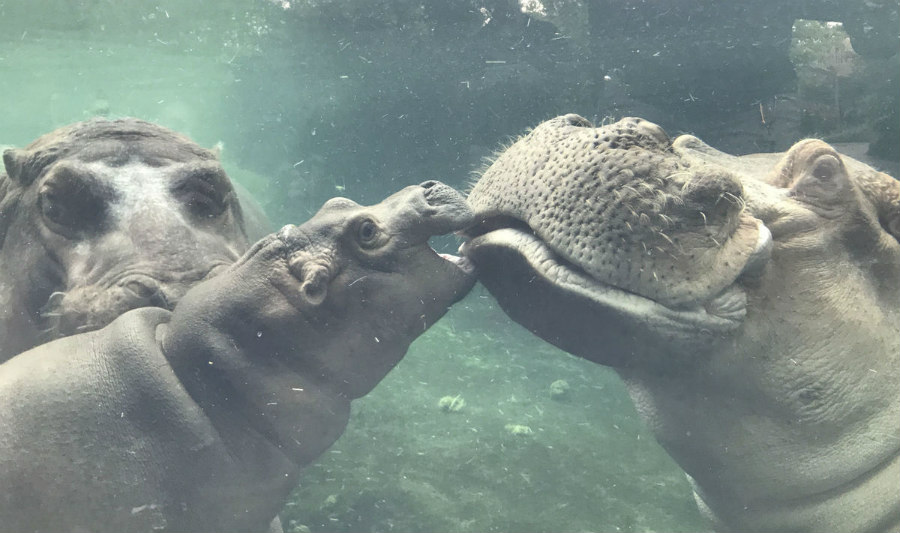 Much of that stems from Fiona’s unique ability to overcome seemingly insurmountable odds. When she was born two months premature in January, it was unclear if she’d survive. Weighing only 29 pounds—about half the weight of a healthy calf—put Fiona in immediate danger. When the Cincinnati Zoo announced her arrival and began sharing photos and videos of her progression, including the first time she walked, stumbled on the joy of bubbles, and visited her parents in the hippo enclosure, we were all enraptured. It was a classic survival story wrapped up in a cute hippo who loved her human caretakers and was lovingly fed with a bottle. Each stride Fiona’s made since then—including finally being reunited with her parents full time and taking their first selfie—has been documented for us to marvel at.

Ordinarily, I avoid zoos, and on the rare occasion that I do visit, I’ve never rushed to see the hippos. They’re notoriously violent animals that have been known to kill a human or two on occasion. None of that applies to Fiona, who has brought me and thousands of others into her underwater cult where she does no wrong and we’re completely captivated by her every mundane move. Whether it’s her famously twitching her ears at visitors, twirling through the pool as eloquently as a ballerina, or munching on lettuce, Fiona has created an ecosystem that revolves around her every whim. The cult of Fiona is best exemplified through the scores of fans, myself included, who flock to the zoo’s Twitter feed daily to see the latest video or photo of our queen.

The zoo realizes that their star hippo is their greatest asset, and they’ve built their social media presence around her. Sometimes it’s a photo to celebrate a recent achievement, such as reaching 500 pounds, while other times it’s a video set to classic music from the nutcracker. Within hours, the image or video has been retweeted thousands of times, no doubt sent through group texts to other Fiona-obsessed humans. There’s something magical about Fiona that draws a continuously growing audience to her Facebook show, to a children’s book that’s definitely making it into my nieces’ stockings this year, and to the Cincinnati Zoo, which is piecing together their reputation after the death of Harambe. Yes, the same zoo that houses Fiona also housed Harambe, a gorilla that was killed in May 2016 after a 3-year-old child went under a rail and over a moat to get into the enclosure. Rather than tranquilizing the 450-pound gorilla, zoo officials chose to shoot him under the guise of protecting the child from harm. Harambe was spotted dragging the child through water right before the fatal shot. 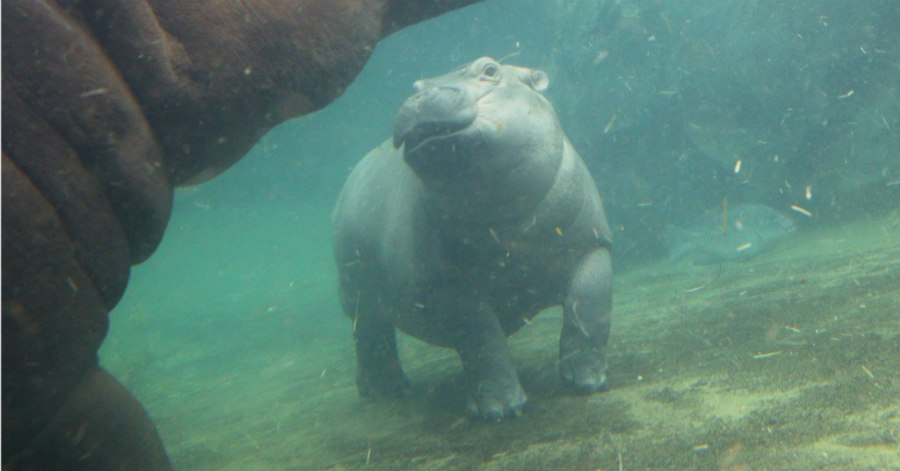 Photo: Cincinnati Zoo/Twitter (Fiona the Hippo walking in her enclosure)

Immediate outrage ensued. Some people argued that killing the gorilla was unnecessary, though wildlife experts disagreed. Others latched onto Harambe’s death as a symbol of the “fear mongering and corruption that liberals and the mass media have been pushing for so long.” Minnesota Vikings running back Jerick McKinnon even wore cleats that bore Harambe’s name. Overnight, Harambe went from an unknown gorilla to a recognizable meme, catapulting the Cincinnati Zoo into a harsh spotlight often reserved for Sea World. The zoo deactivated their Twitter account for two months after being harassed and bombarded with Harambe memes, though Cincinnati Zoo Director Thane Maynard said this public outrage didn’t have an impact on visitor rates. Wiping off the stain of Harambe’s death and renewing their reputation required a miracle. Behold Fiona.

The zoo has thrown all of their resources behind Fiona because they had to. Once interest sparked, they had to capitalize, in an effort to erase the past and move forward anew. She is their great hope—and ours. Through her mere existence, Fiona has given us something hopeful to latch onto during an onslaught of political and social turmoil. In tumult, we’re often searching for pockets of hope. Given that the president is a bigot who uses tragedies to push discriminatory policies; seemingly every powerful white man in Hollywood has harassed or assaulted women; and gun violence is so prevalent that we’ve become desensitized to mass murders, there’s a dire need for hope—and somehow, Fiona has filled that void. By simply existing and beating the odds (she’s the smallest hippo calf to survive), the little hippo that could is a beacon of light in one of the darkest times in modern history.

In much of the same way that we’ve projected our ideals onto celebrities, including Beyoncé, Rihanna, and others who’ve created rabid fanbases, we’ve projected our hopes onto Fiona. She, the great gray wonder, can save us from ourselves. By eating lettuce and twirling, Fiona has given us a joy that’s not reliant on the news cycle. Through Fiona’s carefreeness, I see a freedom that I long to inhabit. It’s an inner peace that’s not reliant on the whims of life. The peace that surpasses all understanding is rooted in a knowing that no matter what, I will survive. Fiona, above all else, embodies the mantra that better is coming and shows that even as the world around us goes to shit, there’s still something good in the world. She may be a hippo, but she’s also the internet’s greatest underwater treasure.