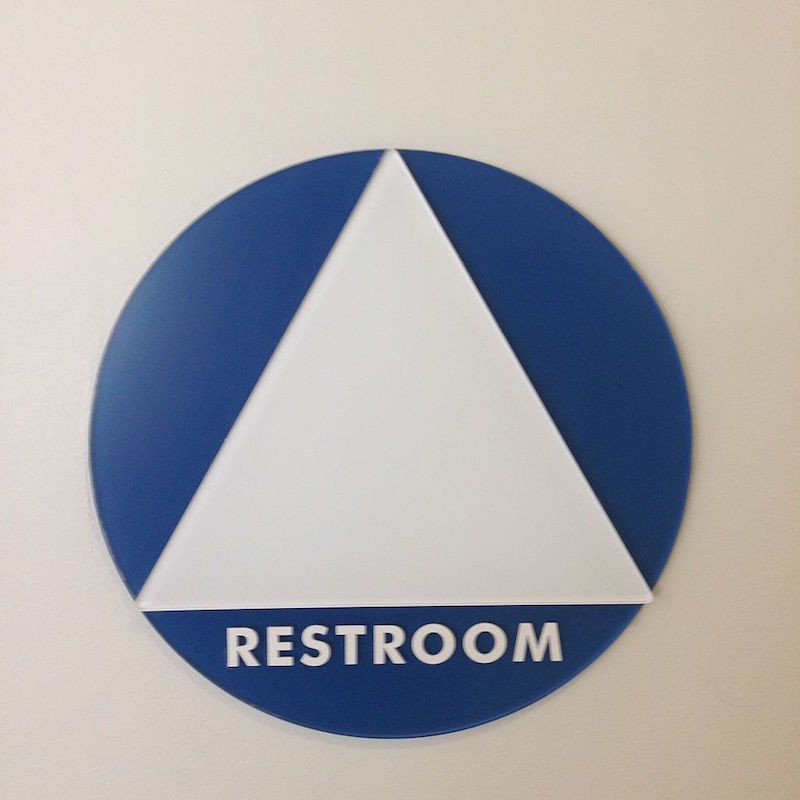 It’s so simple: A gender-neutral bathroom sign at the University of California - San Diego. Photo via Creative Commons.

To borrow a snippet of Star Wars, “It is a dark time for the Republic.” Despite the tireless efforts of transgender activists across the United States, “bathroom bills”—legislation limiting access to restrooms, locker rooms, etc. only to those whose assigned birth gender matches the label on the door—barrel forward. At last count, 14 such bills were pending in nine states, and more seem to be sponsored every day, emboldened by North Carolina’s House Bill 2 and Mississippi’s HB 1523. With them come slates of blanket anti-LGBTQIA bills, seeking to ride the bathroom bills’ coattails. If cisgender people thought “transtrenders” were bad, this particular trend is far, far worse.

Still, proponents of these bills claim their work is necessary, and that without their efforts to codify gender discrimination, innocent citizens will be placed at risk of assault and worse. It’s unfortunate that the discussion around trans rights has pivoted so swiftly to center the views of political and religious zealots on the far right, but their discourse has become so widespread that it must be addressed. Here, then, are the most popular objections to letting transgender Americans use the bathrooms of their choice—and why they’re transparently nonsense. 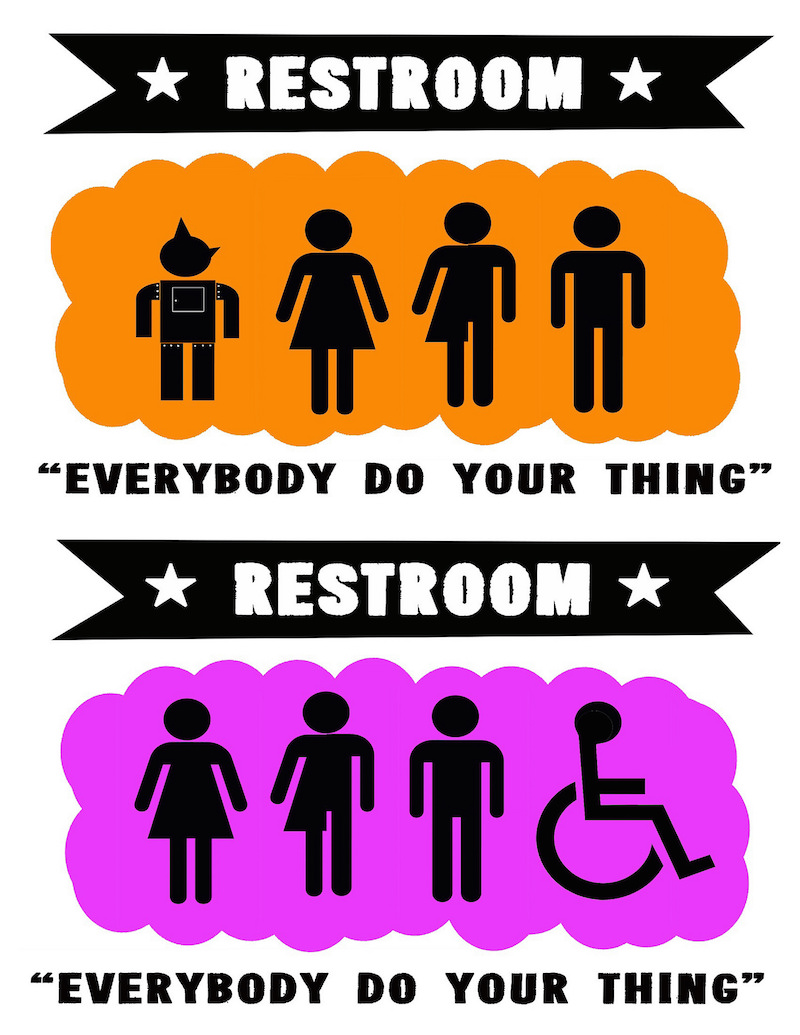 First, let’s acknowledge that this argument necessitates the erasure of transgender men in order to hold water. Not only will anti-trans bathroom bills fail to prevent men from sneaking into the women’s room, it will force thousands of trans men to do so under the guise of “protecting women.” And make no mistake, this isn’t about what trans men look like; you’ve probably seen the (misguided) memes featuring burly, bearded trans men posing in bathroom mirrors while uncomfortable cis women look on, but this isn’t about presentation. If men don’t belong in women’s bathrooms, why do right-wing activists seem so hell-bent on forcing men in there just because they have vaginas?

That said, the argument is completely false in other ways, too. Let’s assume that even half of one percent of people who are attracted to women are compelled to loiter in the bathroom and attempt to peep on them. That would account for thousands of harassment cases a year. Why, then, are there not “no lesbians allowed” signs on bathroom doors? If it’s a problem that’s exclusive to men, why is this problem not endemic in the gay male community? Simple: this sort of behavior is already socially inexcusable and legally actionable. There are already laws on the books to discourage and punish this behavior, regardless of gender.

This is the more frequent corollary to the first point: the insinuation that trans women, by their very presence, open the door for cis men to prey upon cis women. That’s insulting on a ridiculous number of levels, but let’s break this down carefully. Content warning for graphic discussion of sexual assault.

Transgender identities are not a new development. Though trans people have been more visible in the last decade than in many years previous, trans women and trans men alike have been using facilities consistent with their gender identities and presentations for ages. If cis men were waiting for their chance to pretend to be trans, bad news: they already had that ability. So why would they start now? And if one truly wanted to commit sexual assault in a public place, why would they be concerned about a new bathroom access statute?

Bathroom bill advocates protest that, all assertions to the contrary, abusive men have been caught pretending to be trans before. The case of Christopher Hambrook is often cited, but erroneously. Hambrook is a Canadian man who plead guilty to sexual assault and criminal harassment in 2013 after pretending to be a trans woman and gaining access to a women’s shelter. But he also served time for child rape in 2002, and was determined to have multiple mental illnesses and rated as a high re-offense risk during psychiatric assessments, during which he admitted he was not transgender. Hambrook’s is one of the only cases of its kind, and yet it barely lends any credence to bathroom bill arguments. If anything, it proves that vigilance in mental health and transitional housing facilities can never be too high, and that solutions are desperately needed to address violent sufferers of mental illness.

All that being said, there are still more reasons why bathroom bills are not appropriate to address the problem of sexual assault in public facilities. Even though there are already sexual assault laws on the books in every state, rapes regularly take place in women’s bathrooms regardless of equal rights laws; preventing those before they happen would require massive nationwide security upgrades, destroying the privacy bathroom bill advocates claim to protect.

It’s troubling to even acknowledge that this argument exists. But when people like South Carolina Sheriff Chuck Wright say things like “if you are a guy and you go into the bathroom with my wife…I’m gonna whip your tail,” something must be said—because this rhetoric actively leads to the assault and murder of trans people, which we’ll discuss in a second.

Gender dysphoria and body dysmorphia are mental diagnoses which have been recognized by the psychiatric community for decades. What is less known, however, is that it’s not a disorder—a misconception perpetuated by the outdated term “gender identity disorder,” which was phased out years ago. The Diagnostic and Statistical Manual of Mental Disorders lists dysphoria in a category separate from sexual disorders, and while trans people with dysphoria (some do not experience it) are at risk for anxiety, depression, and self-harm, studies have shown that social and familial affirmation can be mitigating factors. Most importantly, however, neuroscience is beginning to show that transgender brains operate differently than cisgender ones, pointing toward a biological basis for trans identities. Gender identity isn’t “just a feeling,” it’s fact.

Again, this is an assertion that posits that trans girls are really boys, and that boys are irresistibly drawn to bullying girls. Setting aside the fact that schools must take steps to prevent bullying in bathrooms, full stop, this argument is woefully out of touch with reality.

Like adult trans people, trans children are far less safe when coerced into using facilities which match their assigned birth gender. Twelve percent of respondents to the 2011 National Transgender Discrimination Survey reported that they had been sexually assaulted in K-12 school. Forcing trans children to use facilities designed for a gender not their own puts them at great risk for this sort of abuse; allowing them access to correct facilities will lessen that risk and help prevent some of the worst kinds of bullying.

Tell that to the trans woman who was assaulted in Stonewall’s unisex, single-stall bathroom in March.

It’s tempting just to drop the mic there, but look: unisex bathrooms are relatively rare. Telling trans people that they need to find one whenever they need to use a bathroom in public is incredibly difficult. Just like the security issue before, making unisex bathrooms the norm would require a massive national infrastructure upgrade, which is wholly unrealistic when you consider that we generally have enough bathrooms already. Can’t we just start using them as needed?

So go ahead, print this article out and keep it in your pocket. And the next time you hear someone spout off about men in dresses who are endangering millions of women because of their feelings, haul it out set them straight with plenty of facts and a skeptical eyebrow—just the way your Auntie Bitch taught you.