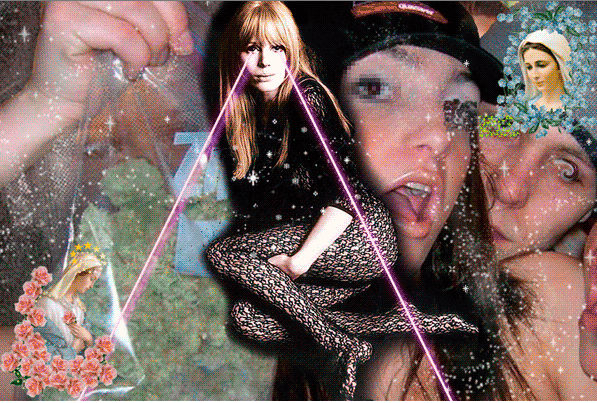 It’s no secret that the art world can be a hostile place for women. While art-bros like Richard Prince and Zak Arctander dominate the news, many people overlook artists who are making good art for our digital age. Here are five compelling artists whose work explores internet-based art and identities. They all remind me that there’s a whole lot of interesting art that helps me understand the weird digital world we live in.

In her work, Mexican artist Gaby Cepeda uses digital technologies to comment on pop culture and femininity. She created vibrant GIFs of Grace Jones and David Bowie, for example. But she’s best known as a curator—she put together the Girls of the Internet Museum (GIM). Founded in 2012, GIM is a Tumblr that serves as an online institution striving to create a portrait of millennial artists as they explore girliness. GIM selects works responding to four different core ideas: sincerity, a subjective representation of the female condition, exploration of online vs. IRL representations of girliness, and the acknowledgement of the “fluidity between emotions/reality in the online/offline worlds.” GIM exists primarily online, but more recently the project has started inhabiting art galleries. I have gotten lost in the GIM Tumblr for hours looking at .gifs, video art, and digital collages. Cepeda has assembled a fascinating collection which reminds us that we are hyperconnected and that femininity is multifaceted.

One of the artists I first encountered through Girls of the Internet Museum is Chicago-born and Paris-based Shawné Michelain Holloway, whose visual style struck, perplexed, and fascinated me with its bold disjointedness. In Holloway’s own words:  “Everything that I’ve made is one singular artwork—each piece contributes to a stream of digital artifacts (films, status updates, music, publications, etc.) that, all together, carefully detail/describe one Black gURL’s #identity + xxxperience of sex and pop culture online. It’s intentionally nonlinear, but it is aesthetically cohesive and packed with small gestures that provide continuity across projects and mediums.” Holloway’s work is primarily viewable online as a Tumblr (though it has been shown in physical galleries) featuring collages incorporating text and images by and of Holloway, digital imagery, and digital exchanges with others. All of her material fits an extremely “internet” aesthetic—in some pieces, Holloway pairs stock photos with screenshots of texts.  Her videos are often intense performances of a hyper-sexual character, flickering digital gestures that feel incredibly intimate and physical.  In a particular video, “a_personal_project, IV: password protected thaumatrope, security measures for a caged bird.mov,” Holloway dirty-talks, primps, preens, and smokes as images of bathrooms, a BDSM dungeon, and her desktop screen flicker. In the end she asks, “You think you’re free? Free to do whatever you fucking want?” The lack of unity between the images is as provocative as their content therein—the bodies, words, and visuals throughout Holloway’s work are all rearranged to create new meanings. 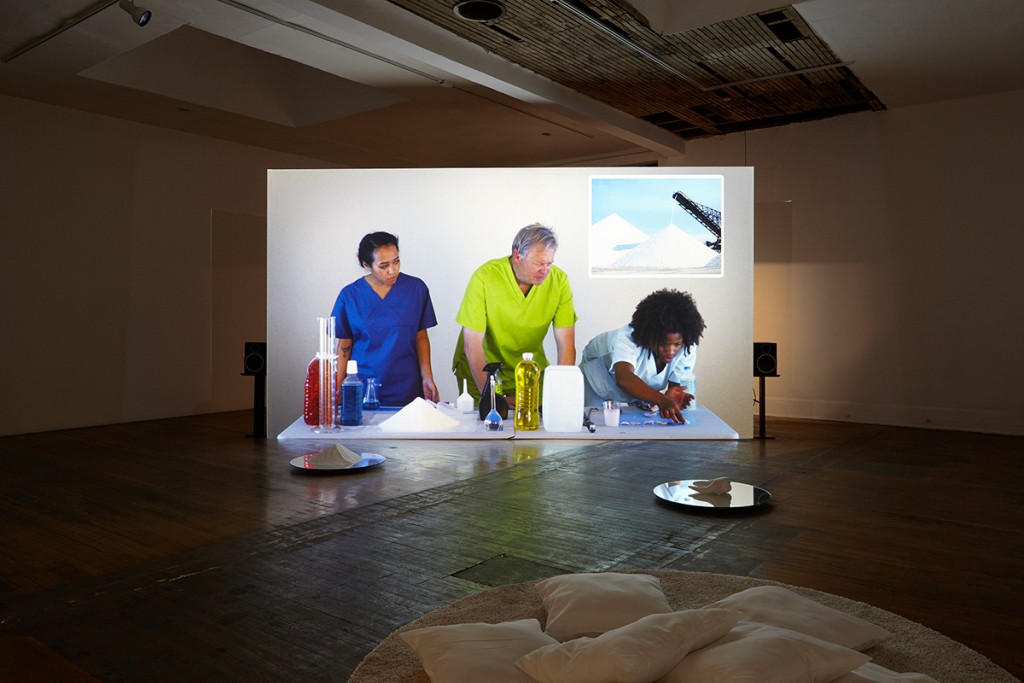 Artist Danielle Dean assembles films from diverse source material. Her actors are friends, family, and Craigslist actors, while her sets and scripts draw from the world of advertising. The film Trainers is a prime example of Dean’s assemblage videos. In the film, five women perform scripts made of Nike slogans and political speeches. As Dean explains, “Drawing from advertising, political rhetoric, and soap opera aesthetics, the project's focus is on exploring the material and psychological effect that the commodity fetish of trainers (sneakers) have on social relations and the construction of race and gender.” The sense of disconnect is also clear in Dean’s other films, which she uploads to Vimeo. In her short video Hexafluorosilicic, three people enter an empty apartment to dispose of something that is supposedly in the bathroom. All language used in the film is derived from marketing of various products that use hexafluorisilicic acid (better known as sodium fluoride)—everything from D-Con rat poison, to Arm and Hammer toothpaste, to Arrowhead bottled water. The characters use the strange language of commercials to communicate with one another, but they’re seemingly conflicted about what it is they’re doing. Pixelated advertising images flash on the screen and something seems to be lurking in a doorway. In all her videos, Dean works within the limits of her source material to explore the strange relationship between human subjects and their manufactured surroundings. 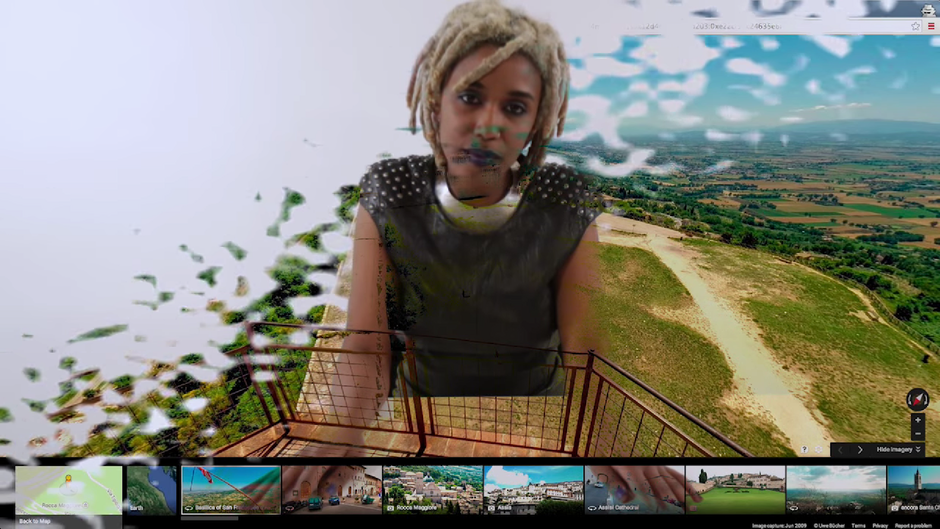 “Truth is less about what ‘is’ in a moral sense than about what we see, thanks to the culture we’ve created online,” says artist E. Jane. Using an online alter-ego E. The Avatar, Jane explores with digital commerce and advertising. Using images, video, and sound, E. The Avatar takes her audience on weekly journeys through digital spaces, and provides print-on-demand products (sweatshirts, hats, bags, etc, through Print All Over Me). With E. Avatar we travel to Hiroshima, consider pioneering cyberspace rather than outer space, learn to take the perfect selfie. In a sense, E. Jane is concerned with how the public self is a “brand” that is tracked constantly around the internet by various logarithms so advertisers can tailor their pitches to specific individuals. So then what is E. Jane’s brand? She told the Walker Art Center, “I define myself as a Black artist/content producer and an Aesthlete, to use Brad Troemel’s term. I have a compulsion to produce a certain amount of content for online audiences and to engage with the content my fellow artists produce, be it writing, music, images, websites, etc.”

If you’re a fan of digital art, you may have come across May Waver, Violet Forest, and Gabriella Hileman’s cybertwee collaboration, whose manifesto affirms softness, femininity, and sentimentality. It reads, “Our sucre sickly sweet is intentional, our nectar is not just a lure, or a trap for passing flies, but a self indulgent intrapersonal biofeedback mechanism spelled in emoji and gentle selfies.” Waver’s piece Embeded Lullabies, commissioned by experimental online publisher New Hive, demonstrates Cybertwee’s values. Waver’s lullabies are composed of rough video footage of bedding in pink, purple, and blue lighting, layered on top of floral or fabric images. Waver’s voice sings bittersweet love songs as the viewer enjoys soft, low-resolution images. This work is delightfully and deliberately homemade, and meant to be experienced or engaged from home, in a private space like a bedroom. Waver doesn’t seek to “create rare objects” rather, she aims for accessibility in her work. In an interview with i-D, Waver reminds us that, “The context in which art is viewed or experienced affects its meaning—who is it accessible to? Is it a noisy community event or a quiet contemplative meditation? I'm not making a value judgement, only saying that I prefer the latter.”

For a great resource on representation in digital art, check out the artists featured in “Towards a New Digital Landscape: Representation, Erasure, and the Future of Digital Art” by Kimberly Drew, commissioned as part of The Walker Art Center’s Superscript Reader.