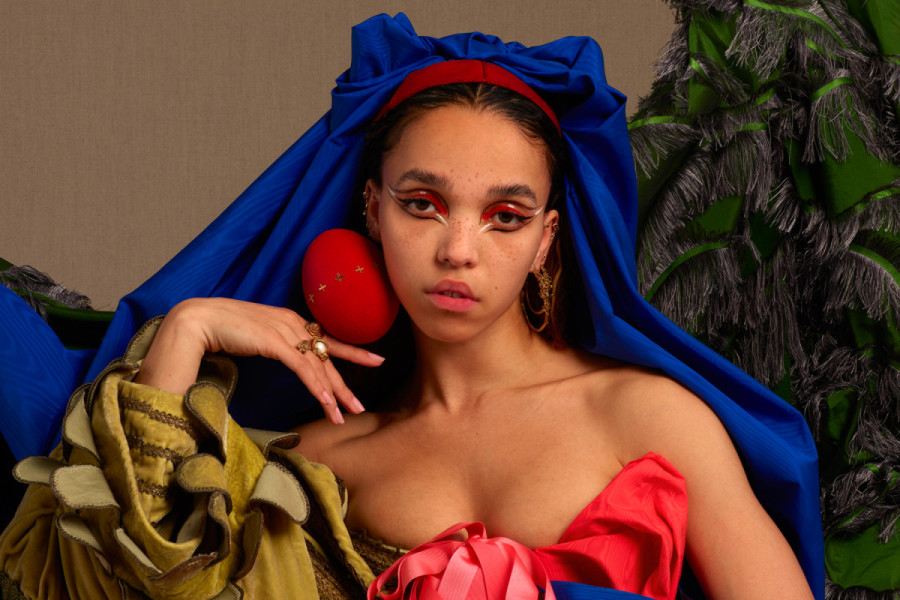 On November 8, more than five years after dropping her debut album, FKA twigs released Magdalene, her second full-length LP. The album’s title is a nod to Mary Magdalene, a notable figure in the Christian Bible whose historical significance has always been inextricably linked to the murder and resurrection of Jesus Christ. The New Testament identifies Mary of Magdala (named after the region in northern Israel where she was born) as a devout follower of Christ who witnessed his crucifixion, came across his empty tomb three days later, and according to the Gospel of John, then became the first disciple to encounter his resurrected form. As cited in early Christian texts, she was an apostle whose standing was as high as Peter, one of the 12 Apostles present at the Last Supper.

Over the years, though, the construct of her identity has shifted and transformed based on how men in power have historically and culturally interpreted her. Dan Brown’s 2003 novel The Da Vinci Code considered Magdalene as not only the wife of Jesus, but the literal Holy Grail, while York University professor Barie Wilson and film director Simcha Jacobovici claimed in 2014 to have unearthed documents that confirmed Magdalene was Jesus’s wife and the mother of his children. Other interpretations, influenced by a sermon delivered in 591 by Pope Gregory the Great, cast her as a prostitute, a widely held misconception that the Catholic Church didn’t officially rectify until 1969.

Still, notable cinematic stand-ins have played into pre-established judgments about Magdalene: Martin Scorsese’s 1988 film, The Last Temptation of Christ, portrayed her as a Jewish prostitute who temporarily thwarts Jesus’s path to holy ascension. But in contrast, Garth Davis’s 2018 film, Mary Magdalene, rejects the idea that she was a born sinner; instead, she’s a woman longing for her own agency and a place in the world. While these readings of Magdalene’s historical significance vary, they’re all rooted in the idea that her very existence either elevated or violated the purity and purpose of God’s Chosen Son. Throughout the history of literature, and by extension music, women have been defined based on their proximity to a man, no matter if he’s a paternal guide, a romantic partner, or an authority figure.

So it’s notable that FKA twigs not only treats her album’s namesake as a source of spiritual strength, but considers how often women are stripped of their agency and their voice—even when they’re the heroine of their own stories. “It is obvious that the values of women differ very often from the values which have been made by the other sex; naturally, this is so,” Virginia Woolf notes in A Room of One’s Own. “Yet it is the masculine values that prevail. Speaking crudely, football and sport are ‘important’; the worship of fashion, the buying of clothes ‘trivial’. And these values are inevitably transferred from life to fiction. This is an important book, the critic assumes, because it deals with war. This is an insignificant book because it deals with the feelings of women in a drawing-room.”

Patriarchy and its co-conspirator, misogyny, dictates not only the value of a woman’s work but a woman’s worth, which is too often measured by a system determined to foster her failure. In a recent interview with Zane Lowe of Apple Music’s Beats 1, twigs explained how she chose the album’s title. “I didn’t look at her as a character, a person in the Bible,” she said. “It was more looking at her as a woman and what she represented, what her archetype was, what was her true story, how was it manipulated, how does that relate to the matriarchy in general, and how that story is manipulated.” Instead of focusing on Mary Magdalene as a religious symbol, twigs’s album casts her as the personification of a recurring theme: womanhood as a trap and love as a cautionary tale—the proverbial allegory of Pride before the Fall.

Placed within the context of the album’s landscape, Mary Magdalene exemplifies the Madonna–whore complex, a rigid dichotomy conjured and controlled by sexist gender roles. “She represents both things,” twigs told Pitchfork. “And in both is when [women] are the most powerful.” For example, in the song “holy terrain,” twigs questions her lover’s loyalty: Is his love conditional? Will he stray once she’s no longer something wild to be conquered? She asks, “Will you still be there for me/ Once I’m yours to obtain/ Once my fruits are for taking/ And you flow through my veins/ Do you still think I’m beautiful/ When my tears fall like rain?” In contrast, the airy ballad “daybed” describes the sense of defeat that often comes with depression: “Lonely is my hoping/ Empty is my sweet thing/ Aching is my laughter/ Busy is my pastor.”

“daybed” treats depression as a state of existence and not definitive proof of a woman’s inherent moral and biological shortcomings; this approach stands out considering the historical interpretation of women’s pain—psychological, mental, emotional or physical—that has typically been used to demonize women and their emotions. twigs’s nuanced contemplation of womanhood not only appears in the album’s lyrics but in its imagery. A few months before dropping the album, twigs posted on Instagram: “i have always practiced my way into being the best i could be, but i couldn’t do that this time, i was left with no option but to tear every process down. but the process of making this album has allowed me for the first time, and in the most real way, to find compassion when i have been at my most ungraceful, confused and fractured. i stopped judging myself and at that moment found hope in ‘MAGDALENE’. to her i am forever grateful.”

The accompanying mixed-media photo, rendered by British artist Matthew Stone, was a combination of manual brush strokes and a 3D scan of the singer. Parts of her body are missing and her eyes turned milky through different swatches of soft colors. The shade palette coupled with the digitally-altered texture of her skin and her formidable physical presence recalls the otherworldly aura projected in her onscreen transformation as a towering goddess in the video for “Two Weeks.” In the video for “cellophane,” twigs performs a hypnotically seamless pole-dancing routine against a neutral background that soon gives way to an ethereal world inhabited by a winged creature that faintly resembles a sphinx. The creature unmasks a series of faces only to settle on one that looks like a version of twigs with different colored eyes.

The singer tentatively puts one high-heeled foot into the center of the creature’s face, only for the face to absorb her foot in a movement that’s reminiscent of the liquid flexibility of the cyborgs in The Terminator. Suddenly, she tumbles down and away from the light, falling faster as she descends, her body twisting with the precision of a ballerina. Although twigs has said the album’s muse wasn’t a choice motivated by religious curiosity, the imagery in “cellophane” recalls the sacred lore of Abrahamic religion and God casting Lucifer out of heaven or the death of Icarus: a meteoric rise gives way to a sudden and ugly fall. The song’s lyrics—about the painful demise of a relationship—also evoke exhaustion, defeat, and disbelief: “Didn’t I do it for you/ Why don’t I do it for you/ Why won’t you do it for me/ When all I do is for you.” It’s the aching confession of someone who has abruptly realized that love is not and often can never be enough.

The song ends with, “They’re hating/ They’re waiting/ And hoping/ I’m not enough.” The usage of “they” seems to represent an opposing force intended to test or ultimately break the romantic partnership. When a woman in a heterosexual relationship is solely defined by the man in her life, she becomes a mirror—a reflection of him rather than his equal. The track “mary magdalene” is an obvious reference to Kate Bush’s 1989 song “A Woman’s Work,” but twigs’s version offers a different perspective: The soon-to-be-mother experiencing complicated childbirth in Bush’s song isn’t the protagonist of her own narrative; instead, the song is centered on the nameless woman’s husband who stands outside the operating room consumed by his own regrets and refusing to cry. In twig’s version, the woman is a “fever for the fire,” awakening from the ashes like Sylvia Plath’s Lady Lazarus, who made dying into art and vowed to eat men like air.

Her creative consciousness envisions Magdalene—and other historical women—as radicals who are fully human and self-actualized.

Despite the rejection of performing passive femininity, which starkly contrasts twigs’s “I’m Your Doll,” “Papi Pacify,” and some of her earlier tracks, “mary magdalene” treats vulnerability as an asset or the key to balance. “I sometimes find that a certain type of enforced empowerment is very oppressive,” twigs told Pitchfork. “I mean, I am powerful and independent—and incredibly vulnerable and sensitive. As a woman of color, this idea that I need to be a Nubian queen all the time is very stressful. I do find it problematic to always feel like your icons are always strong and always okay. If that is somebody’s idea of slaying in this time, it’s wildly off the mark.” This idea of duality also comes through on one of MAGDALENE’s standout tracks “fallen alien.”

While the title alone manifests Bowie as an extraterrestrial in the 1975 film The Man Who Fell to Earth, the lyrics capture the loss and betrayal of a woman who has been robbed of her power and her freedom. twigs sings, “I’m a fallen alien/ I never thought that you would be the one to tie me down/ But you did/ In this age of satan.” The song tonally switches from anxious to discordantly delicate and back again, the speed of the verses increasing with urgency. A witchy choral arrangement occasionally provides background vocals, ultimately cutting out a few seconds before the instrumental fades. The frenzy of “fallen alien” is poignantly subdued in the following track, “mirrored heart,” where twigs wonders, “Did you truly see me/ No not this time/ Were you ever sure/ No no no not with me.” When someone is your mirror, you never really see them.

Like the literary trope of the Madwoman in the Attic, the religious interpretation of Magdalene has changed as the Christian Church’s views have evolved, regressed, and then evolved again. In some interpretations of the Gospel, the “seven demons” expelled from her body were literal demons while other interpretations believe the demons signify her sinful nature. On “home with you,” twigs’s distorted voice hisses with a sinister bite as she declares, “The more you have the more that people want from you/ More you burn away/ The more that people earn from you/ More you pull away the more that they depend on you.” In other moments of the song, her voice takes on an operatic surge of tenderness, vocals cradled by the piano and wind and string instruments, echoing the sonic expansiveness of Kate Bush’s “Wuthering Heights.”

Ultimately, the Magdalene that reigns in twigs’s latest album exposes the limits and loneliness of deification. The idealized concept of womanhood has been dependent upon the willingness to view self-sacrifice and suffering as a duty, but twigs isn’t interested in a world where multifaceted womanhood is flattened. Her creative consciousness envisions Magdalene—and other historical women—as radicals who are fully human and self-actualized.

Read this Next: The Surreal and Startling Power of FKA twigs 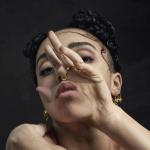 by Stephanie Watson
The British artist's surprise new album and accompanying short film are dazzling to say the least.

Vanessa Willoughby is a freelance writer. Her work has appeared on but is not limited to: The Toast, The Hairpin, Vice, Hello Giggles, and The Establishment. She is also a Fiction Editor at Brain Mill Press.