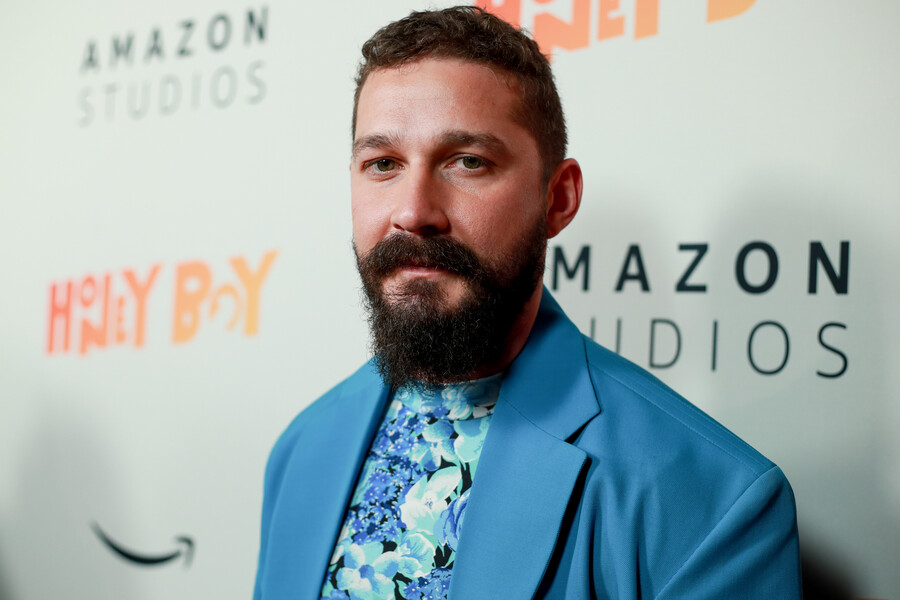 Shia LaBeouf attends the premiere of Amazon Studio’s Honey Boy at the Dome at Arclight Hollywood on November 5, 2019 in Hollywood. (Photo by Rich Fury/Getty Images)

Last week, the New York Times reported that artist FKA twigs had filed a lawsuit against her ex-boyfriend actor Shia LaBeouf, alleging sexual battery, assault, and infliction of emotional distress during their one-year relationship. The lawsuit unveils the violent, horrifying ways LaBeouf terrorized twigs throughout their relationship, including multiple instances of physical assault and emotionally abusive and controlling behavior. In a heartbreaking Instagram post, twigs wrote: “It may be surprising to you to learn that I was in an emotionally and physically abusive relationship. It was hard for me to process too, during and after I never thought something like this would happen to me. Which is why I have decided it’s important for me to talk about it and try to help people understand that when you are under the coercive control of an abuser or in an intimate partner violent relationship leaving doesn’t feel like a safe or achievable option.” In the aforementioned NYT article, twigs said that, despite her financial and emotional independence, she found herself unable to leave LaBeouf: “He brought me so low, below myself, that the idea of leaving him and having to work myself back up just seemed impossible.”

What twigs describes is an all-too-common cycle of abuse and emotional control in cases of domestic abuse. As she warns, this kind of interpersonal violence takes place in every level of society; the super-rich should not be exempt from taking accountability for the violence they terrorize their loved ones with. In response to the lawsuit and some prodding by reporters, LaBeouf issued an apology and a confession of sorts. “I’m not in any position to tell anyone how my behavior made them feel,” he said in an email to the NYT. He added, “I have no excuses for my alcoholism or aggression, only rationalizations. I have been abusive to myself and everyone around me for years. I have a history of hurting the people closest to me. I’m ashamed of that history and am sorry to those I hurt. There is nothing else I can really say.” He also noted that he is “a sober member of a 12-step program” and is currently in therapy.

Upon first read, LaBeouf’s apology might sound like an admission of guilt and perhaps a first step toward taking some accountability for his harmful actions toward twigs. Some people argue that he’s apologized, so we should forgive him. But LaBeouf’s apology sounds less like an attempt at true accountability and more like a post-#MeToo damage control move, where public relations teams understand that survivors are more likely to be believed than before. LaBeouf’s half-hearted admission of guilt takes a page from abusers like Louis CK, who admitted wrongdoing but also leaned strongly on the idea that the biggest victim of his own behavior was himself—and of course, two years later, CK was given a standing ovation during his first comeback show in Toronto. In this way, famous men’s admission of guilt and performance of remorse masquerades as accountability when nothing material has changed in their lives or in the survivors’ lives. LaBeouf is undoubtedly counting on this post-#MeToo strategy to get past multiple accusations of abuse because he knows—as most abusers do—that leniency for violence is abundant for men who declare that they’re in crisis.

His admission of abusing his loved ones for years—and the public’s repeated willingness to keep giving men like LaBeouf chances despite a widely reported pattern of violence—reveals something more sinister about how society currently deals with apologies from abusive famous men. LaBeouf’s violence is well-documented. Though twigs’s openness about LaBeouf’s abuse came as a shock for some, he has been repeatedly exposed as an aggressive, abusive man. He was arrested for disorderly conduct on two separate occasions in 2014 and 2017 and was recorded making racist remarks toward a Black police officer. twigs’s lawsuit cites allegations from a previous girlfriend of LaBeouf’s, stylist Karolyn Pho, who alleges that during their two-year relationship, LaBeouf once “drunkenly pinned her to a bed and head-butted her, enough that she bled.” In 2015, BuzzFeed News reported that LaBeouf injured his then-girlfriend Mia Goth, and allegedly said to witnesses that he would have killed Goth if the fight hadn’t been broken up.

And yet, LaBeouf has been one of the most beloved actors, with many sympathetic to his personal struggles, especially those revealed in his critically acclaimed 2019 film Honey Boy, which chronicles the difficult relationship he had with his father. LeBeouf’s also increasingly become one of the internet’s most meme’d actors (resulting in accounts like @shialabeoufthirst) of the last couple of years, most recently because he was stoned during a virtual table reading of Fast Times at Ridgemont High. He’s been framed as a sympathetic figure, a relatable person, and the sort of celebrity we should stand with given the way he’s distanced himself from Hollywood and all that comes with it. But, as we know per twigs’s story and the stories of other women who have found themselves on the receiving end of LaBeouf’s violence, he’s hardly worth supporting at all.

Shia LaBeouf’s apology sounds less like an attempt at true accountability and more like a post-#MeToo damage control move.​​​​​​​

Admitting to the abuse he perpetrated while not offering material reparations to the survivors or demonstrating long-term behavioral changes only reproduces the cycle of abuse on a public scale: “An abuser may weave apologies into his pattern of abuse, so that when he says ‘I’m sorry’ it becomes another weapon in his hand,” Lundy Bancroft, a domestic abuse consultant, writes in his 2003 book Why Does He Do That?: Inside the Minds of Angry and Controlling Men. “His unspoken rule may be that once he has apologized, no matter how cursorily or devoid of sincerity, his partner must be satisfied; she is not to make any further efforts to show her feelings about his mistreatment, nor may she demand that he fix anything.” In the case of such a famous figure apologizing so publicly, the theory is the same: Since LaBeouf apologized and quasi-admitted to harm doing, the public doesn’t need to demand more from him. We must be cautious with how quickly we forgive abusers because of their invocations of their past trauma and mental health issues, especially because there is a double standard at play here.

For abusers, trauma serves to justify their violence, but for victims of abuse, trauma is used to discredit them and portray them as “crazy.” How many people are abusers allowed to terrorize because of their trauma until they are able to rehabilitate themselves? When LaBeouf was questioned about the specifics of the accusations, his apology didn’t hold. In a separate email to the New York Times, LaBeouf wrote that “many of these allegations are not true,” but that he owed the women “the opportunity to air their statements publicly and accept accountability for those things I have done.” Unfortunately, it is impossible for LaBeouf to be held accountable for his actions when he does not own up to the things he did. True accountability begins by naming the specific hurt you have caused and not discrediting the survivors in the same breath you paternalistically defend their right to speak out. This is the most revealing part of LaBeouf’s damage-control strategy.

We must consider that in the post-#MeToo world, rich and famous abusers have learned to skillfully manipulate outsiders by regurgitating the language of accountability. If they halfheartedly apologize, the public will accept the bare minimum as accountability because, all in all, the power dynamics still work in their favor. Feminist philosopher Sara Ahmed has written about the “politics of admission” within the context of institutional racism, and I believe this framework can be applied to famous men seeking to rebuild their reputations after their bad behavior is exposed. Ahmed argues that admitting to wrongdoing fails “precisely because the ‘admission’ is read as a sign of transcendence; if we admit something then we are not that thing at the moment of admission.” LaBeouf’s attempt at damage control is a typical post-#MeToo strategy that will be recycled in the next few years. The challenge for those of us who wish to eradicate gendered violence is to come up with new ways to demand non-carceral accountability from men, LaBeouf included, who have had the resources to rehabilitate themselves—and have chosen not to.

Trump, Roger, and Other Ailments at Fox News

From Lovable Brute to Aggressor