Follow Women of ColorLessons from the Women's March on Washington 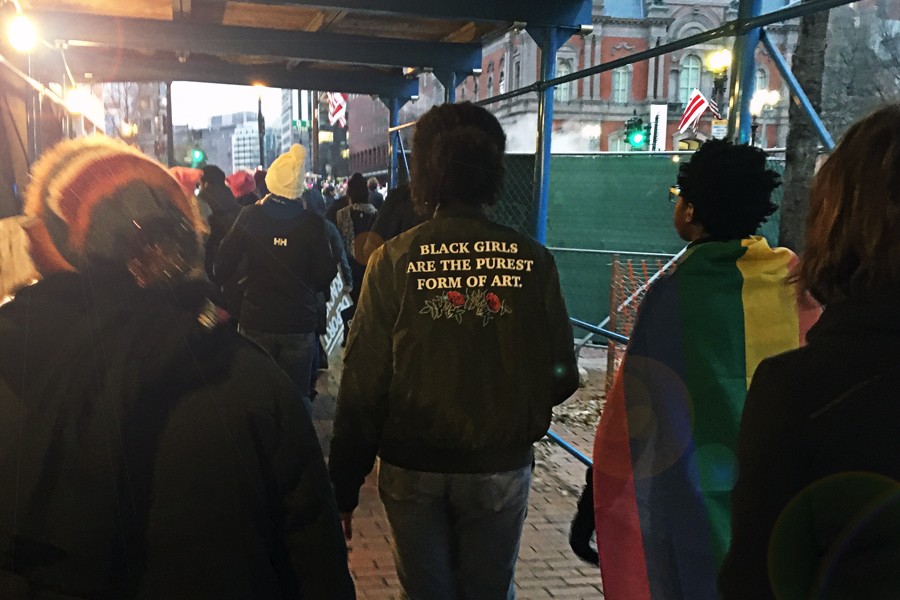 Even before the Women’s March on Washington had grown to include every U.S. state, more than 700 cities, and every continent, I knew I had to be there. For me, it was a pilgrimage. It was being a part of history.

On my first flight, I passed a couple wearing Make America Great Again merch, and I had a moment of fear; but I looked them in the eyes and kept walking past them in my Planned Parenthood sweatshirt. At the metro station in D.C., there was already a line to get into the station two hours before the start of the rally. I overheard a father explain the word “patriarchy” to his two young sons and passengers asking each other where they’d come from to attend the march. At the Judiciary Square Metro Station, as each new train pulledup, protesters cheered and greeted the new arrivals. The energy was electric and full of hope.

As soon as I stepped out of the metro, I was surrounded by women in pink, women with signs, and most hearteningly, young women, sometimes with their mothers, and sometimes in their own girl gangs, taking to the streets and being heard. What was supposed to be a gathering of 200,000 was clearly more—the march route had to be changed because the crowd had already filled up the entire route just by gathering and standing—it was signs and pink hats as far as I could see. 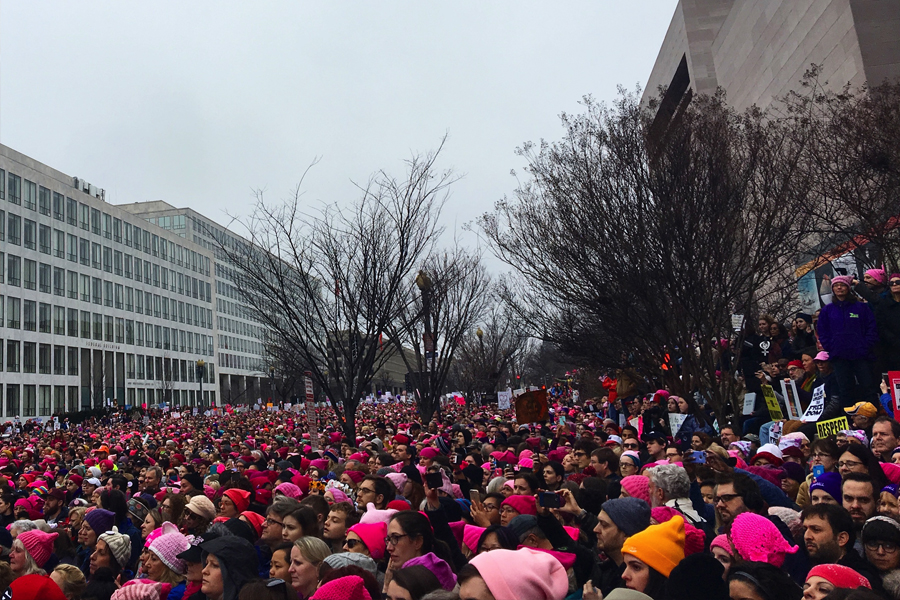 The rally before the march was packed with incredible speakers—Cecile Richards, Michael Moore, Van Jones, Gloria Steinem—but it was women of color, again and again, who brought the house down with their music and songs, with their words, and with their hearts.

Alia Sharrief, a Muslim rapper led the crowd in chanting “We are not afraid of Donald Trump” and smirked as she said, “Donald Trump came for the Muslims directly, talking about he gon’ ban us, talking about we gotta register. We been Muslims our whole entire lives and guess what? That ain’t happening. Okay? We know our rights!”

Amanda Nguyen, president of Rise, a non-profit that focuses on sexual assault survivor rights, brought me to tears in seconds talking about the advocacy she took on after her own rape. Alicia Keys declared we were on fire, and I watched a tween with green hair in front of me start to scream and jump up and down when she saw her hero get onstage. “I didn’t know Janet Mock was going to be here!” she yelled to her mother and the crowd.

California Senator Kamala Harris spoke and introduced the Black Women’s Caucus; Illinois Senator Tammy Duckworth wore her most badass studded leather coat; and the crowd was treated to the privilege of hearing the Angela Davis. The six-year-old immigration activist Sophie Cruz got me crying again when she spoke to the crowd in English and in Spanish about hope and love and led a chant of “Si se puede!” 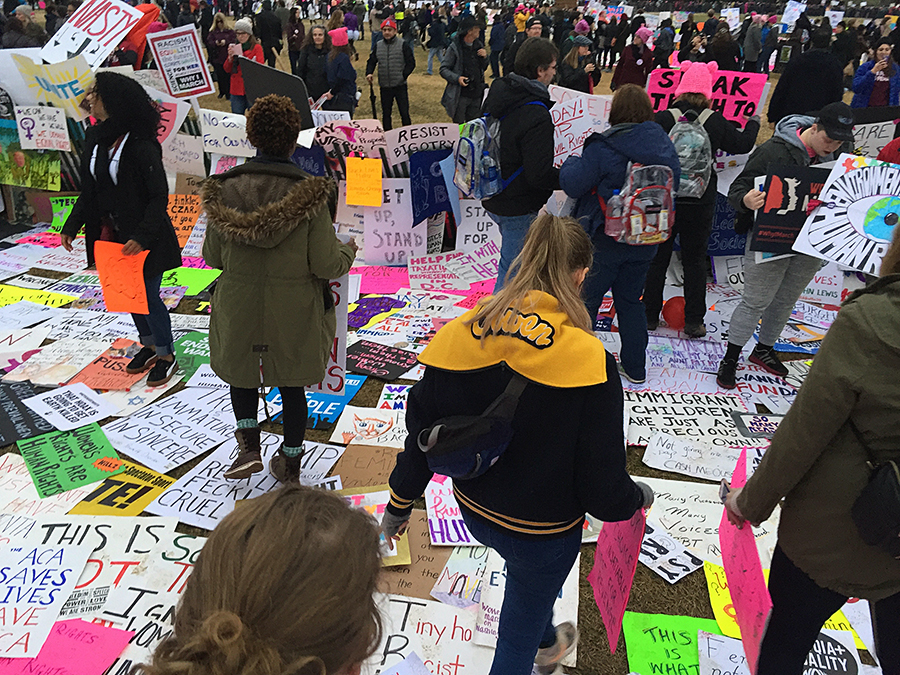 There are pretty-perfect photographs from the march calling out white women for their lack of interest in intersectional feminism and the fact that it was white women who helped carry Trump into office while 94 percent of Black women voted for Clinton. As the rally went on past its scheduled end-time, the crowd (of mostly white women) was becoming antsy and began chanting “Let us march!” over the (mostly women of color) speakers. Haven’t any of y’all ever been to a rally before? No one expects it to end ontime! Why are you complaining about listening to these luminaries? Though the rude chants were from all over, in my part of the crowd, I heard it from suspiciously near the section where women with “Pro-life feminist” signs were gathered.

A Co-Chair of the March, assured the crowd that the march would begin soon and that she would limit each speaker to thirty seconds; that didn’t stop protesters from continuing to interrupt the rally and for some to begin marching anyway. But next was one of the most powerful and unforgettable moments of the rally and surely my entire life. Janelle Monáe sang “Hell You Talmbout,” a song about the murder of Black men and women with the Mothers of the Movement—Gwen Carr, mother of Eric Garner; Sybrina Fulton, mother of Trayvon Martin; Maria Hamilton, mother of Dontre Hamilton; and Lucia McBath, mother of Jordan Davis. As each Mother said her son’s name, the crowd chanted back “Say his name!” It was incredible.

Instead of scheduling the rally to end there (because what could be a more powerful moment?), or say, giving Angela Davis more speaking time, Amy Schumer came out to introduce surprise-guest Madonna, who sang “Express Yourself” and “Human Nature” and admitted that she’s thought about blowing up the White House, becoming the first person to mention violence in the entire rally. Protesters who had already left came back to watch Madonna, though I took Amy Schumer’s appearance as my own call to begin marching.

With every step, the crowd still stretched further than I could see. The marchers were united, chanting “This is what democracy looks like,” “Black lives matter,” “Can’t build a wall; hands too small,” and singing “This Land is My Land.”  When we passed a bottleneck that led the masses into a larger street, a bicyclist with a boombox led the crowd running and dancing to the White House while playing “Run the World (Girls)” by Beyoncé. At the end of the day, protesters left their signs in front of Trump’s new home as a sign of the promise we chanted along the route: “We won’t go away; welcome to your first day!”

Crowd-sourced estimates are now putting the total March participation across the country at between 3.2 million and 4.6 million. This was history, and it was led by women of color. Of course there is so much more work to be done, and it needs to be done every single day: Keep your voices loud, and as Co-Chair of the March, Linda Sarsour said, “If you want to know if you’re going the right way, follow women of color.”