The Grant TourFollowing the Money in Science Research 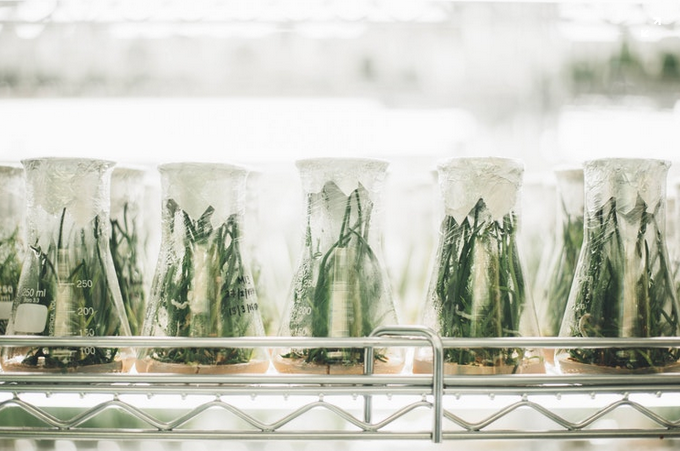 Photo by @chuttersnap on Unsplash

I like to say that I left the cushy life of a scientist in order to write. This is a joke: The world of research funding is one where academic scientists earn scraps working in labs that struggle to stay afloat in a competitive environment, and getting a grant can be the difference between staying in the field and fleeing it, as many scientists have done. It’s a different story in the biomedical industry, places like pharmaceutical companies, where scientists are paid much higher salaries and don’t have to worry about finding external revenue for their projects. Those projects, however, are handed down from on high, dictated not by the scientist’s own interest but by what the company thinks will make them money. The process of grant distribution might seem irrelevant to those who don’t work in these fields, but understanding where research comes from, who gets to do it, and how it’s funded is a big part of thinking critically about science.

In 2015, the United States government spent almost $38 billion dollars on basic research. That’s less than it used to be, but it’s still taxpayer dollars. The result is that research labs are turning more and more to other sources of funding—namely, corporations. More on why this is troublesome in a minute. For now, focus on this: grants are the lifeblood of research, and any researcher will tell you that the chances of getting one are grim.

The biggest source of grant money in the biomedical sciences (my own area of experience, though funding for other sciences follows similar patterns) is the National Institutes of Health. The NIH falls under the Department of Health and Human Services, and its website states that its primary goal is to function as “the nation’s medical research agency—making important discoveries that improve health and save lives.” The NIH houses its own labs, but also helps to fund others. Its grants include an R01—the biggest grant there is, supporting several multi-year projects under an umbrella idea—or an R21—for innovative new techniques, usually—or an NRSA, if you’re a PhD student hoping to fund your thesis.

Though there are other governmental funding organizations, like the National Science Foundation, the NIH is the most notorious gatekeeper of what does and doesn’t get funded in the biomedical sciences. Unless you’re part of what one anonymous scientist calls the “old boy network,” your chances of getting funded depend on the objectivity of the scientists who review your grants—who look at not just the merit of your project but your whole career (even your grades in college!) in order to make decisions. Hope you’re not someone who’s marginalized, or you might ring the bias bells within them—something that happens more frequently than you might think.

If you’re a new academic without someone more experienced to guide you, the process of applying for a grant is—to use a technical term—a mess. You have to decide which grant best fits your needs; but you also need to know what the NIH actually wants in each section of the grant, such as the specifics of what should be in your budget. Nowadays, you also need to have at least preliminary data in order to apply: Because the number of researchers applying for grants has increased and the organization’s budget has shrunk, NIH wants to make sure its money is going towards something that works. This combination of scarcity and risk aversion impacts not only new research, but established research as well. One of my old PIs (a principal investigator, the PhD-level faculty member who runs a lab) told me that when she started out, you could have a solid idea with papers in the field to back you up and you’d have a good chance of securing funding. But by 2015, when I worked for her, she wasn’t even sure she could renew the grants she’d already received. She wasn’t a new PI, either—she was the head of the department.

From the jump, this process already bars anyone who doesn’t have access to a mentor, especially if you’re at a top-tier research-focused university (known as an R1), where competition for funding is cutthroat and some labs are shut down even as those next door expand. These barriers to success impact the most privileged among us—those who were able to go through graduate school with the help and mentorship they needed. Is it any wonder, then, that Black and Hispanic/Latinx science professionals make up only 9 and 7 percent, respectively, of the entire STEM workforce? In a world in which I’m already at an employment disadvantage for being trans and Middle Eastern, I’d want to avoid that, too.

The grant process isn’t arbitrary, exactly, but sometimes it feels that way. The next step in funded decisions—peer review—is instructive. During peer review, people knowledgeable in your field get to decide whether your lab lives or dies. (This sounds dramatic, but while most layoffs are non-PI scientists, there’s no guarantee that a PI isn’t next.) That means someone you’ve got beef with can read your perfectly sound grant proposal and give it a low score—therefore  denying it funding—based on something totally irrelevant. In one comment on an NIH blog post on how to navigate contradictory reviews, Dr. Ram Bhatt noted that in his experience, “most reviewers favor their friends/collaborators’ grant applications.” The same post found other scientists joking about having to become friends with the Scientific Review Officer—the person who assigns reviewers to your grant, and thus a possible shortcut to a favorable score—in order to increase their chances. Women are already less likely to get their research funded, and other marginalized scientists face even higher bars. This makes the funding game even harder given that for many researchers, particularly new ones, a grant can make or break your career.

Here’s another thing about grants, something I didn’t learn until recently: The university gets a cut. My husband—who’s getting his graduate degree in geology—was told by his PI that the University of Nevada, Reno, takes more than 40 percent of the grant money that comes in. Maybe it’s a public university thing, I suggested, but it’s not—Harvard Medical School takes 69 percent. This means most of money granted to a lab also goes to the university. Furthermore, none of this is transparent—it took me a solid 10 minutes to find those numbers, disguised as they are under Facilities and Administration Rates.

These are our tax dollars at work, so this lack of transparency is frustrating. In the case of a lab wholly funded by grants, it’s easy to see what that money pays for. Salaries for graduate students, technicians, and even PIs are often paid out of grants, though the heaviest cost is research materials: A few microliters of an antibody could cost several hundreds of dollars; a rat might cost $30, with another $1 or so each day it’s housed. (During the last year of my master’s degree, I used 115 lab rats, to give an example of how that cost piles up.)

These high costs are a big part of why current grants tend to go toward research that’s all but guaranteed to get results; perennially funded projects include promising cancer drugs or models of diseases that already have thousands of papers behind them. These are certainly important, but there are huge gaps in scientific knowledge that are equally so, ones that could and should be filled. To go back to the rats: One huge oversight in animal research is that much of it is done only with male rats; female rats are considered more difficult to study due to the presence of the rat equivalent of the menstrual cycle. Knowing whether the presence and flux of estrogen makes a difference in what we’re studying matters, and would be easy to research if only there were money for it. (One of my PI’s rejected grant proposals involved studying the cognitive and behavioral effects of pregnancy in rats—something that’s rarely researched.)

Conventional wisdom among my former peers (as well as my dad, an engineer at the medical equipment and pharmaceutical company Baxter) is that if you want your research to make an immediate impact, you have to go into the for-profit ventures outside of academia—pharmaceutical companies, tech startups, medical equipment/technology manufacturers. Baxter is one of them; other big names include Johnson and Johnson, Pfizer, and Bayer. Because of the breadth of their products and services, industrial sciences can be more powerful than academic sciences when it comes to speed of research and overall impact. They could be a saving grace for the field—except, of course, that money gets in the way here as well, since science is never a neutral field.

Take the subject of obesity. The NIH isn’t going to fund a project looking at, say, the health benefits of being fat, because 1.) they believe there’s no evidence to support such a claim (there is in fact evidence that moderate levels of fat have health benefits); and 2.) even suggesting such a thing would upend the “war on fat” that healthcare professionals have waged in the past few decades. But industry wouldn’t undertake that research as subversive as this either—there’s just too much money to be made in weight-loss products and services.

Conventional wisdom is that if you want your research to make an immediate impact, you have to go into the for-profit ventures outside of academia

As industry funds more and more academic research, the types of projects that get funded get narrower; profit drives everything, and the best way to build profit is to get your product on the market as soon and as cheaply as possible. The point isn’t to necessarily help the people who need whatever it is you’ve created; that’s more of a side effect. In academia, on the other hand, the lifetime of a project is so slow that the positive effects it could have sometimes feel like a pipe dream.

Science is deeply political, and thus so is research. If it weren’t, we might already have discovered the trigger for puberty, thereby helping trans teens avoid further gender dysphoria. We might have antidepressants that don’t take weeks to start working, which could decrease rates of suicide. The documented bias in grant funding limiting the access of marginalized researchers and the new questions they might ask; the question of how trauma affects infants and children, for instance, is something we’ve only started studying in the last decade. There’s no money in reexamining the system’s failures and flaws, but we need to. We need to interrogate where grant money goes and why in order to ensure the future of science—good science—and those who want to make it better.