“Footprint” Confronts the Impact of Overpopulation on Poor People of Color

Footprint is a lightly produced but highly informative documentary that confronts the dire human and environmental costs of overpopulation. The film focuses on several nations shouldering much of the burden of strained resources and overpopulation—like the Philippines, Mexico, and Kenya—and demonstrates not only the extreme depletion of natural resources caused by overpopulation, but also how these issues have especially drastic consequences for women and children.

Footprint compares rampant consumerism in the United States to the lack of vital resources in other nations through conversations with population and environmental experts from around the world. For example, while U.S. citizens use a breathtaking 2 million plastic bottles every five minutes, residents of Mexico City often go days and weeks without water they need for drinking, cooking, and cleaning.

The film also brings viewers to the Kibera slum in Nairobi, Kenya, where families with four (and sometimes many more) members sleep together in tiny, single-room homes. Birth control options may be available, but women’s husbands do not always allow them to use it. This has resulted in an ever-increasing number of women living with severely limited resources having more children than their families can afford.

In the Philippines, Footprint follows tour guide and activist Carlos Celdran, who explains that the church has a strong political influence in the Philippines (80 percent of the countryis Catholic), so affordable access to birth control remains out of reach and the population continues to grow.

Footprint also highlights the work of the Lady Health Workers in Lahore, Pakistan, a team of healthcare workers who travel to homes throughout the city to speak to women about their birth control options. Because sons are preferred, many families will continue to have children until they have a son, which, like restrictions on birth control usage and access, also causes women to have many more children than they want or can afford.

Using a necessary global perspective, Footprint informs viewers that the solutions to overpopulation problems will require everyday people to resist religious patriarchy and consumerism—or we all risk losing the resources we need to survive. 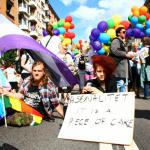 The asexual visibility movement has grown over the past few years—many asexuals are starting to come...