The Forgotten History of Female Athletes Who Organized Their Own Olympics 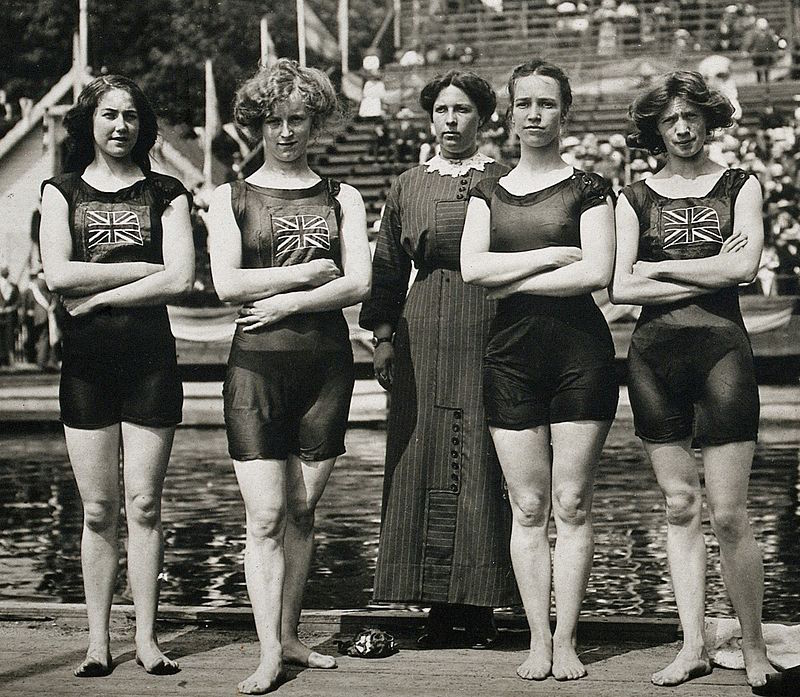 Swimming was one of the few sports women could compete in at the 1912 Olympic games, where the United Kingdom team (above) took home gold. Frustrated at their exclusion from many Olympic events, female athletes organized their own games from 1922 to 1934. (Photo credit: Creative Commons)

The Olympics is a not a neutral event. Although Olympic organizers like to present the Games as an apolitical celebration, the way the Olympics are structured reflect the ideals of the elites who are most involved with organizing the event. As we approach the kickoff of the Summer Olympics in Rio de Janeiro on August 5, it’s worth examining gender dynamics in the Games’ history—particularly looking at how female athletes were largely excluded from the Olympics for years as well as the often-overlooked activism of women who fought to compete internationally.

In the early 1900s, the International Olympic Committee (IOC) only allowed women to compete in a handful of events. Only 22 women took part in the games held in 1900. But in the early 1900s a worldwide women’s movement was demanding political inclusion, with some success. As women gained the right to vote in Europe, Russia, and the United States, behind the scenes, some IOC members were quietly moving to expand women’s participation. But IOC President Baron Pierre de Coubertin was implacable, angling for the continued marginalization of women’s sports. After the 1912 Stockholm Games, he and many of his IOC colleagues believed “an Olympiad with females would be impractical, uninteresting, unaesthetic and improper.” 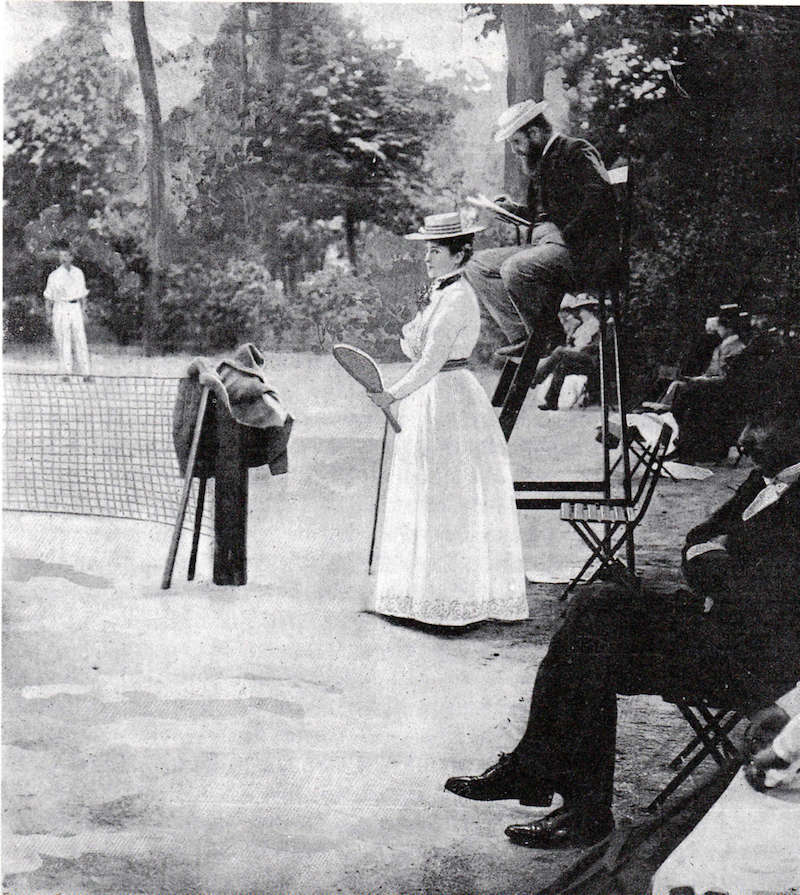 Very proper: A French tennis player was one of few women who could compete at the 1900 Olympics (Photo credit: Creative Commons)

The 1928 Olympics in Amsterdam was the first time that doubled the number of female participants: almost 300 women took part in the Games, thanks largely to the inclusion of a small slate of women’s track and field events. However, citing medical “evidence,” the IOC ruled after the Amsterdam Games that the 800-meter run was too dangerous. In Amsterdam, after completing the race, a number of competitors fell to the turf to regain their strength. Anti-feminists pounced at the opportunity, arguing that women were too frail to run such distances, and quite remarkably their views won out. Women were not allowed to compete in the 800-meter run until the 1960 Olympics in Rome. Still, in 1928 women comprised about 10 percent of all Olympic athletes. 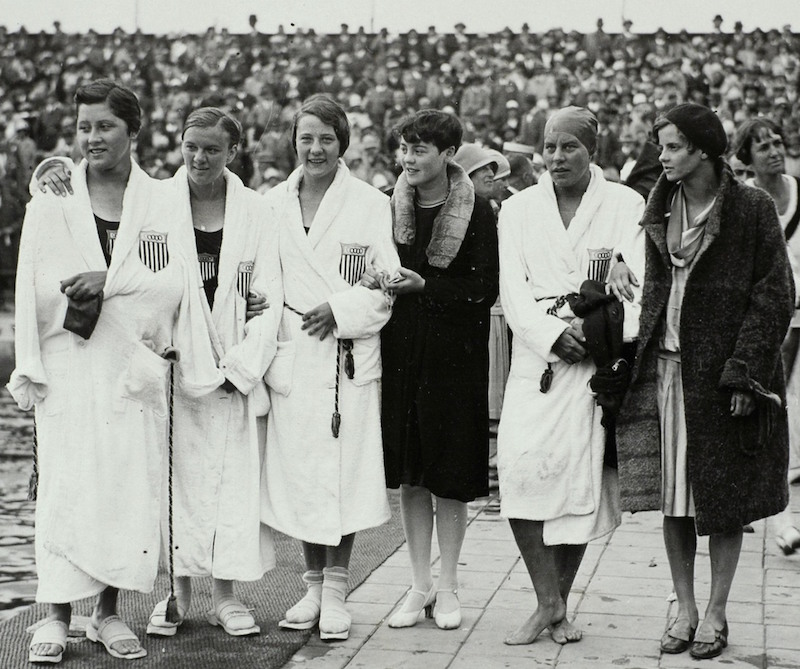 The Olympics echoed the gender and class structures of the time, but marginalization sparked an innovative response. In the 1920s, dissident athletes teamed up in solidarity with sympathetic supporters to organize alternative athletic competitions rooted in principles of equality. To challenge IOC sexism, women and their allies organized alternative games, a vital yet largely forgotten act of political dissent. Everywhere women looked, the Olympic cards were stacked against them. The IOC, as led by Coubertin, opposed women’s full participation, as the minutes of the 1914 IOC general session made clear: “No women to participate in track and field, but as before—allowed to participate in fencing and swimming.”  Discrimination was baked into the master plans.

Enter Alice Milliat, a French athlete and activist whose bold actions scythed a path for women’s participation in the Games. After the exclusion of women from track and field in Antwerp, Milliat founded the Fédération Sportive Féminine Internationale (FSFI) on October 31, 1921. At its first meeting, the group voted to establish a Women’s Olympics as an alternative to the male-centric Games. In total four Women’s Games were staged, in 1922 (Paris), 1926 (Gothenburg, Sweden), 1930 (Prague), and 1934 (London), with participants coming mostly from North America, Western Europe, and Japan. 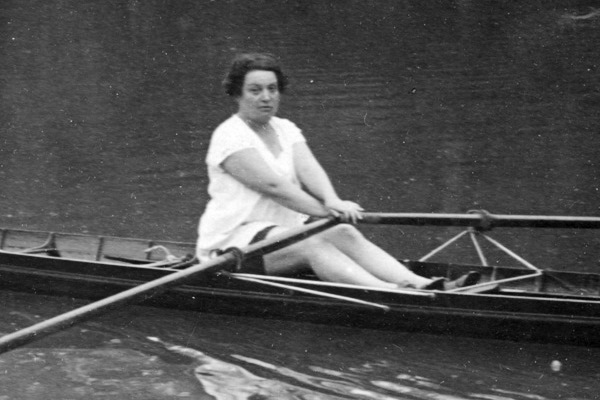 The first Women’s Olympics in 1922 were largely a success. More than 20,000 people attended the single day of competition at Paris’s Stade Pershing, where athletes from five countries (Britain, Czechoslovakia, France, Switzerland, and the United States) competed in 11 events, more than twice as many as the IOC would include when it finally allowed more women’s track and field events in 1928. Newspapers of the day reported favorably, if somewhat backhandedly, on the strides women were making in sports. According to the New York Times, 1922 “was notable for the development of women athletes in all branches of competitions fitting to their sex. Remarkable progress was made by them, and almost overnight, they assumed a place of great prominence in the world of athletics.” No longer were “girl athletes … a decided novelty,” but “capable of impressive performances.”

Four years later at Gothenburg, the now-renamed Women’s World Games were also a one-day affair, although with athletes from eight countries. In 1930, Prague played host to a three-day gathering featuring more than 200 top-flight female athletes from 17 countries. Media coverage was typical of its day, if belittling by present-day standards. In an article titled “Girls Go to Prague,” one newspaper reported, “Nine girls from Vancouver B.C., young, athletic and socially prominent, accompanied by a chaperone, are on their way to Czechoslovakia.”

Nevertheless, the event drew considerable public interest, with more than 15,000 spectators. The fourth Women’s World Games were held in London in 1934, with 19 participating countries. Organizers added basketball to the slate of track and field events. In a way, the FSFI was undercut by its own success. By 1936, the group had increased membership from five to 30 countries and had secured allies in the International Association of Athletic Federations (IAAF), but, Mary H. Leigh and Thérèse M. Bonin argue, “no matter how determined they were and no matter how good their arguments were, women could not get very far without the support and alliance of the male sport establishment.” 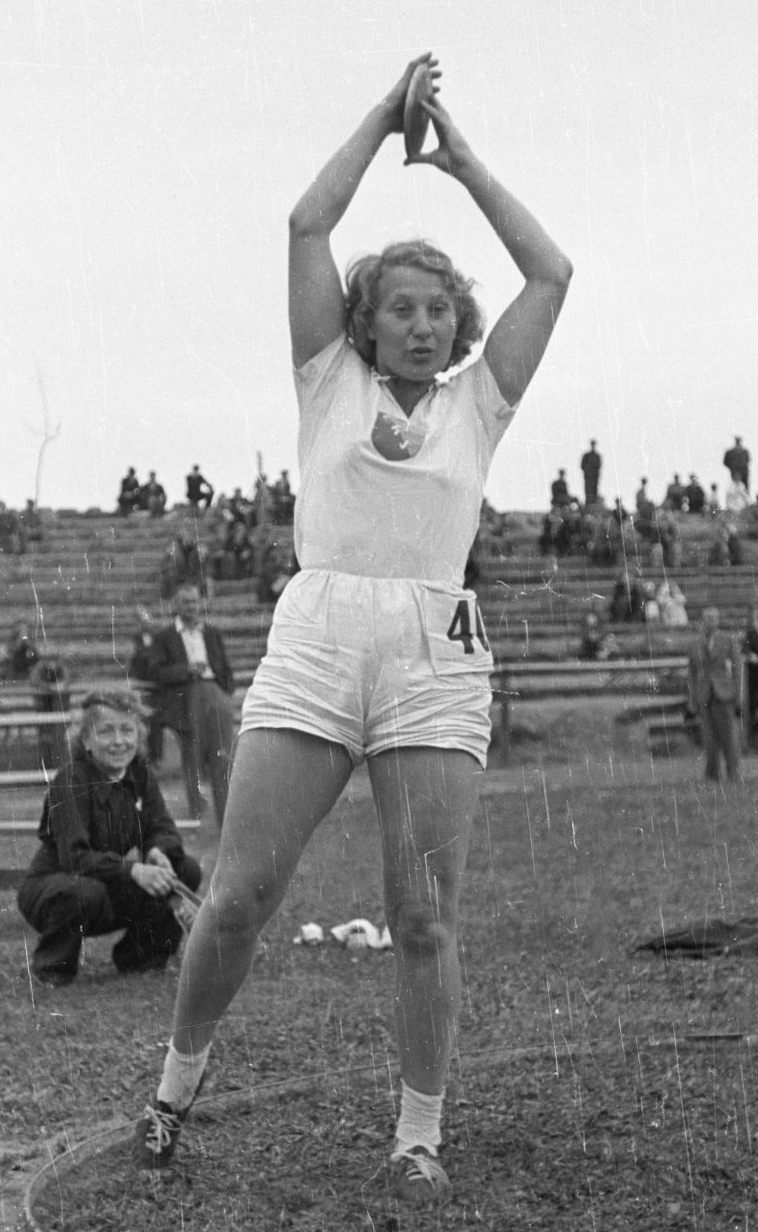 A commentator lamented what would happen to women’s relationship with men if “those delightful creatures begin to toss the discus.” But those kinds of ideas didn’t stop Polish athlete Jadwiga Wajsówna from competing in the 1936 games. (Photo credit: Creative Commons)

The IAAF had incrementally taken more and more control of women’s track and field and absorbed it into the Olympic schedule. In 1936, the FSFI folded, after serving great purpose. Meanwhile, traditionalists chafed at the inclusion of women. Sometimes, those who wished to limit the range of sports positioned themselves as progressive advocates of women’s athletics. For instance, Dr. Frederick Rand Rogers, the director of the Department of Health and Physical Education for the State of New York, adopted the approach of “more, rather than less, but of the right kind.” Cloaking paternalism and sexism in the respectable garb of science, Rogers argued for “less strenuous” sports for women, and opposed women’s participation in the 1932 Olympics.

Alice Milliat and her colleagues used a classic inside-outside recipe for political change. They worked inside the corridors of power with IAAF and IOC power brokers while creating a viable alternative outside the IOC’s orbit—the Women’s Olympics. Their relentless pressure on the men who controlled the Olympics paid off in an early breakthrough for women in sport. But an uphill battle still lay ahead. Many sports administrators were skeptical of women’s sports, including Avery Brundage, the top Olympic official in the United States. While embroiled in a 1932 controversy over whether the athlete extraordinaire Mildred “Babe” Didrikson was an amateur or a professional, he remarked: “You know, the ancient Greeks kept women out of their athletic games. They wouldn’t even let them on the sidelines. I’m not so sure but they were right.” Didrikson had been suspended by the Amateur Athletic Union (AAU) for alleged professionalism because she had appeared in an advertisement for milk. This was enough for Brundage to advocate suspension, although Didrikson was later reinstated. 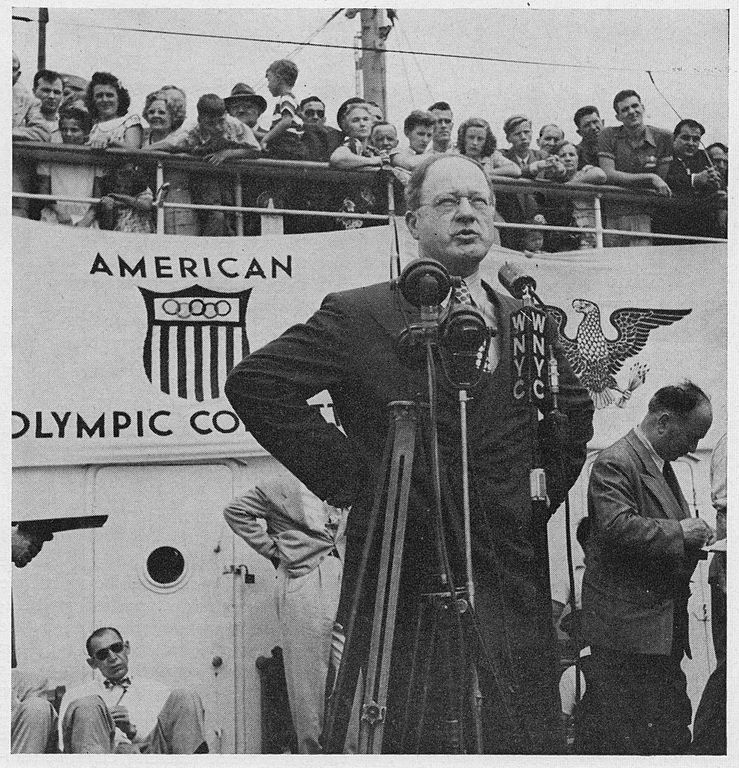 Many Olympic officials, like Avery Brundage (above) who served as IOC president from 1952-1972, were not so excited about women competing in many Olympic events. (Photo credit: Creative Commons)

At the time Brundage was head of the Amateur Athletic Union, so his opinions carried weight. In 1949, as IOC vice president, he wrote: “I think it is quite well known that I am lukewarm on most of the [Olympic] events for women for a number of reasons which I will not bother to expound because I probably will be outvoted anyway. I think women’s events should be confined to those appropriate for women: swimming, tennis, figure skating and fencing but certainly not shot putting.” In 1957, Brundage still clung to these beliefs. In a circular letter to members of the IOC he wrote, “Many still believe that events for women should be eliminated from the Games, but this group is now a minority. There is still, however, a well grounded protest against events which are not truly feminine, like putting a shot, or those too strenuous for most of the opposite sex, such as distance runs.” These opinions were very much in tune with those emerging from the IOC. The General Session minutes from the April 1953 meeting in Mexico City read—under the heading of “Reducing the number of athletes and officials”—that “women not to be excluded from the Games, but only participation in ‘suitable’ sports.”

Some within the IOC claimed that limiting women’s sports was a way to cut costs in the face of an emerging concern with “gigantism.” They argued that the Olympics were becoming too big and unwieldy—and that slicing women’s sports could slim down the Games. Sometimes the mainstream press could be even more extreme. In 1953, Arthur Daley wrote in the New York Times that he would entertain the idea of eliminating women from the Olympics entirely. “There’s just nothing feminine or enchanting about a girl with beads of perspiration on her alabaster brow, the result of grotesque contortions in events totally unsuited to female architecture,” he wrote. “It’s probably boorish to say it,” he conceded, “but any self-respecting schoolboy can achieve superior performances to a woman champion.” Boorish indeed, but Daley wasn’t finished: “The Greeks knew exactly what they were doing when they invented the Olympics … Not only did they bar the damsels from competing but they wouldn’t even admit them as spectators.” He cautioned: “Don’t get me wrong, please. Women are wonderful. But when those delightful creatures begin to toss the discus or put the shot—well, it does something to a guy. And it ain’t love, Buster.”

This essay is excerpted from Power Games: A Political History of the Olympics by Jules Boykoff, published by Verso Books. 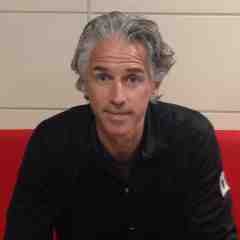 Jules Boykoff is the author of three books on the Olympics, most recently "Power Games: A Political History of the Olympics" (Verso, 2016). His writing has appeared in places like the New York Times, the Guardian, the Los Angeles Times, and Street Roots. He teaches politics at Pacific University in Oregon. 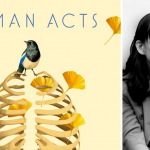 by Amelia Ayrelan Iuvino
Throughout the book, Han raises the question of what it is that allows groups of people to commit such remarkable acts—both of violence and of bravery.