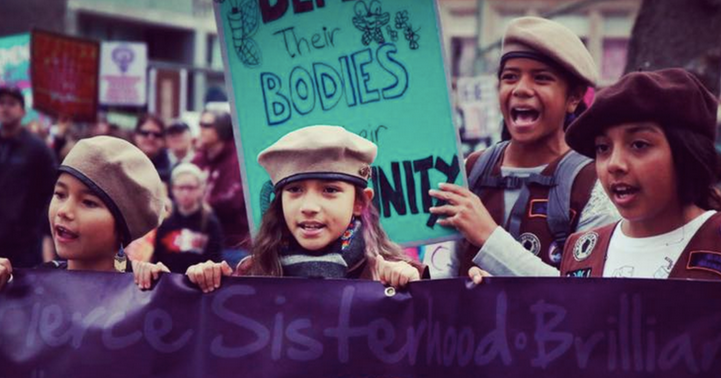 It’s the last post of my Bitch Fellowship: The past three months have flown by, and it’s hard to recall where all the time went. I’m writing this in the apartment that I’ve been living in for less than a week, wo big unpacked boxes of books sitting smack-dab in the middle of my living room, still without Internet. A few days before I moved, my friend Jess gave me a Tarot reading. Jess told me beforehand that one of the best times for a reading is right before a big move, and I was about to endure two (my personal move, and my work’s move) within days of each other.

As the cards revealed things like new beginnings and other things known and unknown to me, I took time to reflect on other parts of my life, including the articles I’ve written thus far for Bitch. I pulled up each link and, like Jess reading my cards, searched for a thread that seemed to tie the pieces together. This is what I saw: We live in a scary, fucked-up world where every week brings more bad news. As a feminist, as a writer, and as an advocate, what gets me by is seeking out small, safer universes that girls, women, and nonbinary folks can live in while also coexisting in the actual world—little beams of light in an otherwise dark and often isolating world. In the past few months I’ve written about YA books, better menstrual products, native and Indigenous healing, and other awesome and radically important alternatives a young girl living in our damaged society can turn to when her own reproductive autonomy is at risk. Finding sources of safety and joy are crucial for our communities and ourselves as we continue to survive and endure. I want to cap off my time as a Bitch fellow by offering four last solaces, spanning music to TV to life advice.

Sandra Cisneros was the guest speaker for an event my nonprofit hosted this past spring, and alongside her powerhouse presence, we invited a few of the young women (also powerhouses) we work with to read their poetry. Before they read, Cisneros had this advice to offer the audience, in particular the young women in attendance: “Be in control of your finances, be in control of your fertility, and don’t be afraid of being alone.” Real shit. When Cisneros spoke these words in her calm, collected way, it struck a chord with all of us. (You can read one of Cisneros’s previous talks, “How to be a Chingona in 10 Easy Steps,” here.)

Instead of knocking on doors to sell cookies, this kickass troop of young girls of color in Oakland, California knock down the walls of patriarchy—and in its place create powerful bonds of sisterhood. The Monarchs’ mission is “to create opportunities for young girls of color to form fierce sisterhood, celebrate their identities, and contribute radically to their communities.” Troop members can earn merit badges for community organization, allyship, and other skills. To invest in the future of young girls of color is to insure livelihoods of empowerment and joy that reach beyond the personal to the political. When I think about the values and power these girls into which these young women will grow collectively, I feel relief that the future will be brown and proud. (Make a donation here and keep the Radical Monarchs going strong.)

Ancient Song Doula Services is a collective of doulas, trainers, and childbirth educators based in New York City, who focus on “reclaiming the ancient principles of birthing.” The collective comprises women and folks of color who offer their services (which include prison and bereavement services) on a sliding scale. They recently hosted the Decolonize Birth Conference, an opportunity for birth workers and doulas of color to celebrate, organize, and share skills and resources. As the birth movement faces more and more injustices around race and class—and, simultaneously, becomes increasingly commodified—it’s exciting to see women of color organizing to keep it accessible and inclusive.

Representations of reproductive decisionmaking on the small screen have become more nuanced, offering complex and interesting characters that stray from the made-for-TV tragic-abortion storylines. Jane the Virgin, (often snubbed during Emmy season, but for which star Gina Rodriguez won a Golden Globe) offers a refreshing alternative to tired tropes. Though the storyline reflects the kooky/overwrought Mexican telenovela on which the show—Jane becomes accidentally artificially inseminated while at a regular gynecological visit—the show still reflects a reality for a lot of women, Latinas in particular. In one groundbreaking episode, Xiomara (who gave birth to Jane at age 17) decides to get an abortion and has to navigate the stress and heartbreak of her Catholic mother’s disapproval. But she sticks with her decision, and her mother comes to respect her right to make it. Abortion remains a taboo subject in Latinx communities, and Jane the Virgin handled the topic gracefully and accurately.

Another strength of the show is Jane’s own decisionmaking around her pregnancy and subsequent romantic relationships. Single motherhood, especially when the mothers are women of color, is too often made stories of one-dimensional struggle and unhappiness. JTV’s representation of Jane’s independence is worth celebrating, and its storylines lare paving the way for intergenerational conversations around reproduction in traditional Latinx households.

I hope this small list of solace centers makes safety seem more possible and less out of reach. It’s important that we keep cultivating more alternatives for reproductive access in a right-wing political regime, and fundraising for organizations and folks who are already doing that work. A sincere thank you to Bitch for allowing me to explore avenues of media that promote (and sometimes demote) reproductive justice. It’s been an honor for sure. Peace out, ya’ll.