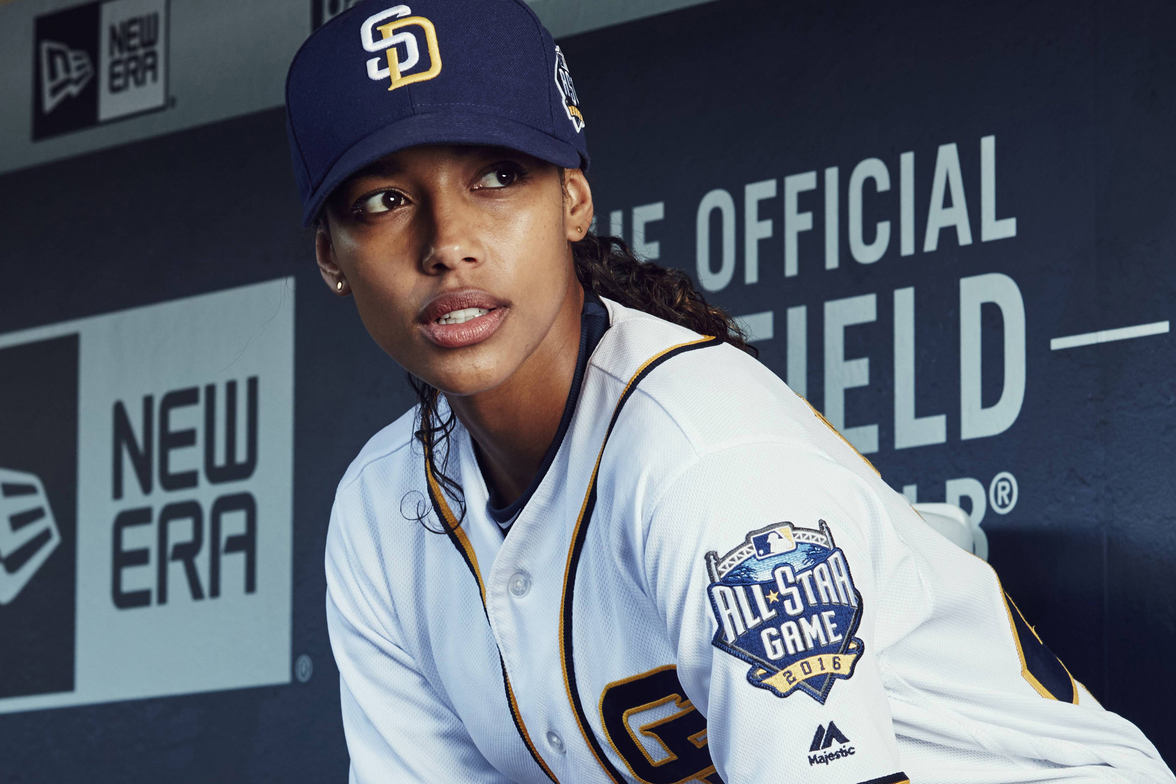 In 2014, Mo’ne Davis commanded the country’s attention by being the first girl to pitch a shutout game and win the Little League World Series. Her undeniable talent brought wider attention to baseball’s gender divisions, and her story became an inspiration to young sports fans everywhere. Fox’s new primetime drama Pitch, which was influenced but not directly based on Davis’s story, imagines what it would look like for a woman to take the major leagues by storm for the first time in history. The show was created by Rick Singer, who worked on American Dad!, and Dan Fogelman, who is known for writing  the Tangled, Bolt, and Cars screenplays. Pitch’s first episode packs in every reliable sports movie cliché—from a heavy-handed inspirational soundtrack to a personal loss that only inspires the protagonist to fight harder—and leaves little room for artful storytelling.

The best thing about Pitch is the charismatic protagonist Ginny Baker, played wonderfully by Kylie Bunbury, who approaches the role with an emotional nuance and subtlety that balances the show’s heavy-handed script. The pilot, which aired on September 22, leads viewers through the first couple weeks of Ginny’s rookie year pitching for the San Diego Padres as she copes with the monumental pressure of being the first woman to ever play in the MLB. The gameplay scenes have all the predictable emotional twists and turns that make drama fans melt. f In Ginny’s first game, she buckles under pressure and bows out early (women are so emotional after all!), and in her next game, an inspirational speech from catcher Mike Lawson (Mark-Paul Gosselaar) helps her pitch a winning game. But what happens off the field is more intriguing. When the Padres’ manager Al Luongo (Dan Lauria) wants to send Ginny back to the minor leagues after her disastrous first game, owner Frank Reid (Bob Balaban) and general manager Oscar Arguella (Mark Consuelos) refuse to send her down, citing both the impressive ticket sales Ginny has brought in and the precedent the Padres are setting for integrating the MLB. “It’s one thing to be the team that called up the first woman,” says Arguella. “It’s another thing to be the team that picked the wrong woman and turned this whole thing into a disaster.” This statement highlights a critical question in the show: Can Ginny become more than just a marketing ploy and prove she is a legitimate asset to the team? 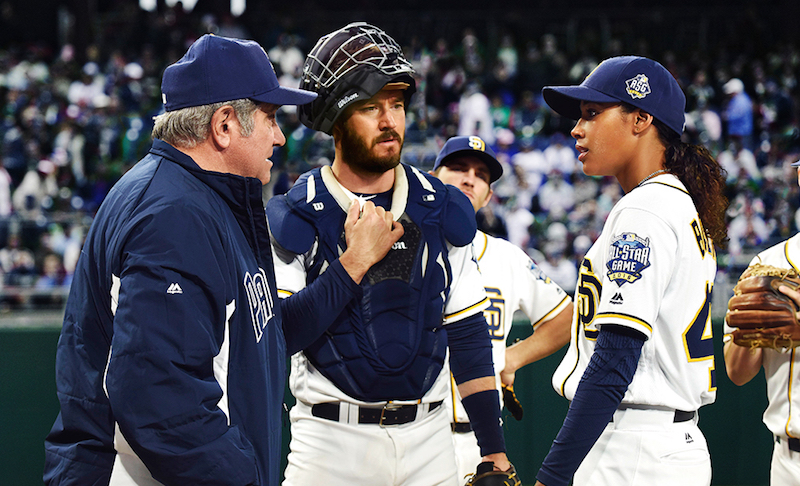 Though the pilot references Jackie Robinson almost too much, I’m hopeful this means the show will not shy away from addressing the fact that in Pitch, the first woman ever to play in any of the four professional North American sports leagues is a black woman in the MLB. In the past couple decades, baseball has seen a sharp decline in African-American players, which the New York Times says may in part be due to the increasing financial strain of participating in youth leagues. In 1995, when fictional Ginny threw her first baseball, 16.1 percent of MLB players identified as African-American. For the past two years, that number has sunk to 8.3 percent.

I hope future episodes of Pitch tackle topics of race and gender with honesty, but considering how the pilot treated issues of sexism, I’m skeptical. For example, when we first meet Ginny as she travels from her hotel room to her first press conference, she is flanked by suited bodyguards. They are reminders that any woman trying to be the first anything will not be able to do so without the threat of violence. But will the show, which is supposed to be for the whole family to enjoy, ever explicitly confront those threats? The central plot point, the question of whether or not Ginny’s emotions will keep her from playing at the highest level of the sport she’s been practicing her whole life, is worrisome, too. When it is announced that Ginny will continue as a starting pitcher after flubbing her first game, nearly all the reactions shown are gendered insults. One teammate quips, “What is this, Bring Your Daughter to Work Day?,” and commentator Colin Cowherd (playing himself) remarks, “What the hell does this show, that if you can’t throw the ball over the plate, but you’re really pretty, you get to play in the big leagues?” Though so much of baseball is a mental game, that the pilot focuses so much on Ginny crumbling under pressure shows that Pitch is not above relying on tired, sexist stereotypes. Had the storyline brought greater attention to competitive dynamics in sports, the episode could not only have appealed more to sports fans but would also have taken better advantage of the gameplay scenes brought about by the show’s close partnership with the MLB. Unfortunately, Ginny’s uncontrollable, feminine emotions may prove to be a fallback for the series: In a future episode, Ginny is rattled once again when she learns she must play against her ex-boyfriend on the St. Louis Cardinals.

There is also the matter of Ginny’s unbeatable screwball pitch, which her father insisted she learn as a “secret weapon” because, as he says, “A girl will never be able to throw hard enough to compete with boys…It’s biology, and you can’t change that.” That Ginny needs this trick pitch to compete is a gimmick in itself. Sure, many a great pitcher has a signature pitch up their sleeve, but how often is it characterized as compensation for lack of physical prowess rather than a mastered skill? Will Ginny show any other forms of athleticism? Will we ever even get to see her at bat?

Then there is the inevitable topic of the baseball tradition of ass-slapping. In Ginny’s first interaction with catcher Mike Lawson, he slaps her ass. Ginny confronts him, refusing to be the butt, so to speak, of his joke. Mike responds by saying he is an “ass-slapper”; he slaps every person’s ass on the team, and as long as Ginny plays for the Padres, he will be slapping her ass. She seems to be okay with this. After all, as is frequently made clear throughout the episode, Ginny just wants to be treated as her teammates are, despite the ridiculous amounts of media attention she faces and the fact that she is the only woman in the entire league. Later, when Ginny steps off the mound after finally successfully pitching in her second game, Al congratulates her and slaps her ass, and Mike says, “She doesn’t like that.” This scene is beyond confusing. Is Mike trying to take ownership of Ginny’s body with that statement, asserting that if anyone will be slapping her “perfectly pear-shaped ass,” as he calls it, it will be him? Or, as a later scene of Ginny happily chatting with her teammates in the clubhouse suggests, do she and her body deserve respect only once she has proven she can perform on a major-league level? Only later episodes will tell, but either way, the resulting message so far is troubling at best.

The underlying theme of wondering what it is to be a trailblazer, a representative for a whole class of people, is the most compelling aspect of the show, but unless Pitch can explore sexism, racism, and tokenism headfirst, it will never be as pivotal and profound as it so obviously hopes to be. The pilot shows just how much potential for greatness this show has, and just how many potholes are in its path. But hey, many mediocre pilots have led the way to great series (Parks and Recreation, anyone?). Audiences may very well continue to tune in to Pitch with the same optimism held by all the little girls in the stands at Ginny’s first MLB game, but as much for us as for them, the stakes, and the potential for disappointment, are quite high.

Let's saddle up the wayback machine, kids, and travel to the year 1866. It was this very year, when baseball was...