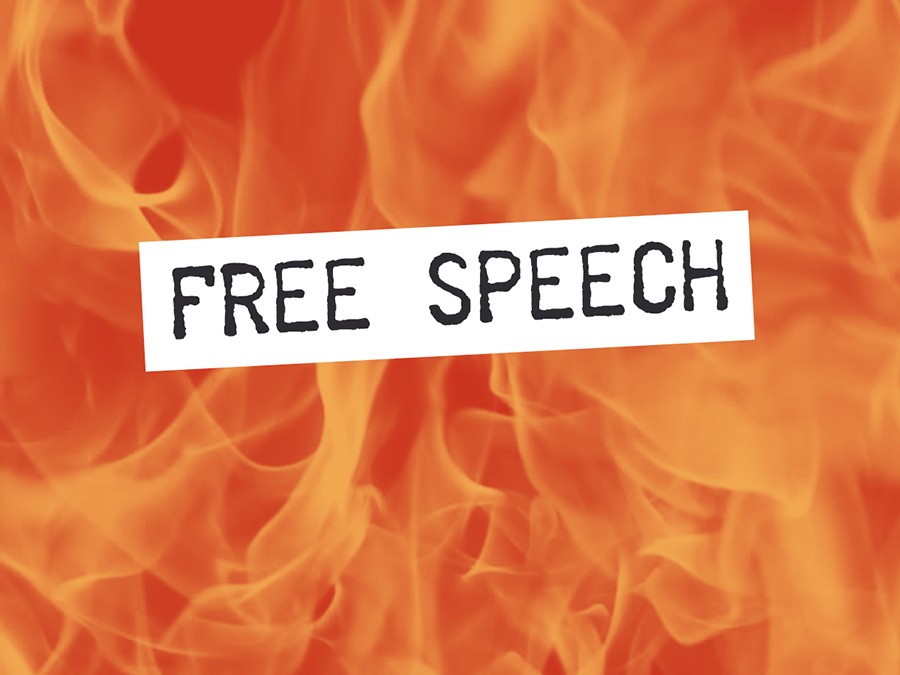 In the name of free speech, let’s get real. The ACLU defended the civil rights of Nazis in 1934 and their argument remains the same: The basic right to free speech must be defended even if the words spoken (and the speaker) are despicable. When the ACLU finally decided that they wouldn’t represent armed hate groups, it felt a tad too late and not quite enough. The damage had been done, and their statement sounded more like a whimper in the aftermath of Charlottesville. Though the counterargument to defend the ACLU is compelling, it feels insufficient and alarming when you think of the millions of dollars that were donated to the ACLU after the election that are potentially being used to defend Tiki torch–holding white nationalists.

But when the President of the United States sides with the same white nationalists that the ACLU protects in the name of fairness, and when that same POTUS blames counterprotestors for contributing to the violence, what message is sent to communities of color? If the ACLU is more committed to principle than impact, what is left for the marginalized is more of the same: Even if free speech incites violence, genocide, and cause for harm, when it comes to defending free speech, the powerful and privileged stand on higher ground. The more privilege you have, the more protected you are, and even though theoretically we all have the same rights, the ability to exercise those rights does not come with the same benefits or bear the same consequences across demographics.

The right to free speech is deceptively facile. Remember the mean kid on the playground who spewed grossness and general malice and would cry “free speech!” at every chance?  It’s a right that is easily distorted even by children—just like 45. Oversimplification, though, is just one of the many problems surrounding the First Amendment.

White supremacists continue to speak freely in public with no consequences, as demonstrated by one wizard telling Afro-Colombian journalist Ilia Calderón that he would “burn” her and other immigrants out of this country. This was after he called her the N-word and followed up with a KKK shrug, denying that he’s a racist or hates anyone. He’s just trying to return the country back to its original demographic. You know, like back in the day when white people owned slaves and generally exploited and abused any person with larger amounts of melanin. He’s not alone in this sentiment either. If you listen closely, white supremacists are trying to contort the fight for land and demographic reclamation into a political—not racialized—fight. Because the whole “You’re not going to replace us!” with swastikas and white hats is NOT, repeat NOT, about racism.

Now that our white supremacist in chief has given a pass to David Duke and his wizard folk, we are subject to listening to the logic of white nationalists claiming that all they want to do is protect their heritage—and Confederate monuments. Take Charlottesville-rally attendee Nicholas Fuentes, who gave a painful, racist I’m-not-racist interview to the Boston Globe about how his life was threatened after he attended the Unite the Right rally and his picture circulated in the media. Fuentes fled Boston University, describing the campus and city as “very dangerous” (which illustrates how Fuentes is clearly dismally unaware of Boston’s infamous hostility toward people of color). Fuentes, using classic routes outlined in the How to Evade Sounding Like a Racist playbook, attempted to change the direction of moral outrage, faulting the political climate—which is clearly responsible for breeding such hateful responses toward him—rather than acknowledging that he’s accountable for the impact that may come with attending an event promoting genetic supremacy. But he’s not racist, he simply wants America to return to its original “composition.”

Unfortunately, there are many more wizards and wizard wannabes finding common ground in their zeal for America to return to a pale-skinned majority. (Psst, heads up! It’s not looking good for the Make America White Again k/clan.) But according to white supremacists, THEY’RE NOT RACIST! Preferring one group of people based on race and skin color apparently does not make one a racist. It’s simply about restoring the “original complexion composition.” Got it?

Speaking of gaslighting, freedom of speech continues to protect wizards and their speech codes, allowing racists to do nearly everything leading up to the Holocaust except start the Holocaust, or employ language used by slave owners, or perpetuate the social systems and statutes that fought to keep Black people and families as nothing more than a legal transaction. The indulgence of free speech comes with a terrifying nonchalance of impact. As if words don’t matter or have no lasting effect on how we treat others, question ourselves, or evolve as a community. There is no responsibility to the provocation and evocation of trauma, or any acknowledgement of what was survived by previous generations. You’re allowed to promote  harmful sentiment and assemble hateful groups without any regard to history, impact, and understanding of intimidation or systematic power. The assignment and protection of free speech operates singularly and happily divorced from the realities of how the marginalized—namely the poor, communities of color, immigrants, undocumented residents, and descendents of global traumatic events—are curtailed, silenced, and broken in our democracy.

Where and how free speech is fought is multifaceted, but one of the smoking battlefields is UC Berkeley, known as the birthplace of the “Free Speech Movement” in the 1960s. Questions lie at the heart of the university: Does it continue to host controversial conservative speakers like Milo Yiannopoulos and Ann Coulter, who have made their fame by way of hate and are protected in the name of free speech? Or does the university pay heed to precaution because of the promise of violence (spurred by few) that may put the community at risk?

The free speech movement came out of the energy of college student activists who were also involved in the civil rights movement and expressed opposition to the Vietnam War. Meaning the origin of the free speech movement at UC Berkeley positioned itself against systematic hatred, violence, and war. It is beyond beyondness that the university beholden in history for student activism against hate and forms of oppression would welcome those clearly speaking against those values—wait for the kicker—in the name of free speech. Yiannopoulos and Coulter (and rumor has it, Steve Bannon might be in the speaker line up for Berkeley’s conservative Free Speech Week), have made their fame with shameless intent to stir up the left by feeding the racist frenzy of the right.

Those bemoaning the disappearance of free speech seem to conveniently forget to consider the content of the speech with regard to the welfare of others. What’s also forgotten is that the proliferation of platforms and devices to “speak” extend far beyond college podiums and rallies. The literal meaning and metaphors of voice remain an essential barometer of civic freedom, one that should not ignore the literal and metaphorical voice of the incarcerated, youth, the poor, LGBTQ communities, immigrants, and basically everyone who the GOP tries to restrict from getting to the voting booths. These populations share a common problem: They must navigate factors that negate their ability to access free speech, including the places where the battles are fought.

Or maybe we can do better than imagining the common good as a place where civility is barely tucked behind gritted teeth or rallies peacefully protesting against hate. When and why is it too radical to lead with an agenda to eradicate violence, contempt, and hate? What would it take to build what Ulrich Baer calls “the necessary conditions for speech to be a common, public good?”

The answer: “This requires the realization that in politics, the parameters of public speech must be continually redrawn to accommodate those who previously had no standing.”

Maybe if we did that more often in all the places we inhabit and redrew the rules for those with no previous standing, the ground for free speech would be a little more even.